Firetha started on Cannith server (May 29, 2012) and had the name Keronna. Keronna moved to Orien server October 9, 2014 and her name was changed to Firetha. Keronna did one TR before switching servers and have done 3 since then. Firetha’s 2 ERs were done in combination with TRs. 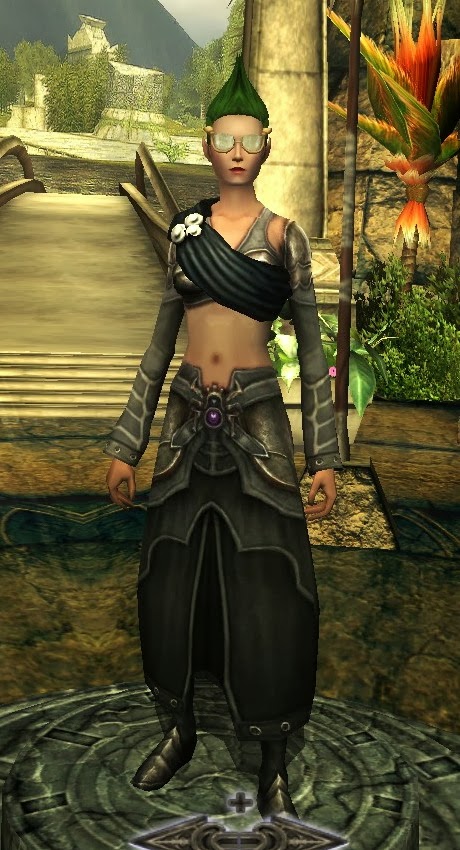 END_OF_DOCUMENT_TOKEN_TO_BE_REPLACED

This is vol 2 of Keonna’s story that I posted January 19, 2013. Keronna, which means spell keeper in elvish, started out as a half-elf cleric with sorcerer diletante on the Cannith server. On Cannith we were running a 5 man group for a while, but soon we were down to 3. My friend Cat joined us and we were 4, but then Cat and Ness left, and it was just me and Rilosa. Before this, though, we had leveled past the heroic cap, done some epics and raids and TR’d. For Keronna’s second life I really wanted to try an undead staffer.. so I made her into a wizard-monk.

Now that I think of it, I can’t really remember much about the static Cannith group. We played together once a week for a couple of hours, we progressed slowly, didn’t acquire much gear and didn’t raid much. The few times I did host a raid, my character felt weak and the server natives didn’t know me or run raids the way I’m used to on Orien. When both Cat and Ness left the group, I felt that progressing would become a lot harder with just me and Rilosa, as neither of us ran a very high dps character at the time. So, after not too much hesitation, I decided to move Keronna to Orien to benefit from the gear and guild I have there. Rilosa soon followed and became part of my and my sister’s static group.

Things changed when Keronna moved to Orien. First I had to change her name, as there already was a Keronna on the server (although, I’m not convinced that there was). Since she had had an elvish name, I wanted her to still have that. I settled for Firetha, which in elvish means dark healer. I found it fitting as Firetha was a palemaster at the time, i.e. healing from dark spells. Then I capped her EDs and did a few raids before I decided to TR into her next life.

For Firetha’s third life I decided to make her an elf air sorc. I had seen some videos of how powerful one of those can be, so I wanted to give it a try. She turned out as a squishy mana drain who only did some of the dps I had seen on YouTube. I wanted more, and that’s when I decided that I was going to turn Firetha into the first character of mine to do a heroic TR train, TR’ing at 20. I started with wizard lives, of which Firetha needed 2. As I write this Firetha is on her third and final wizard life, after which she will be a sorcerer again.

Leveling a wizard solo in heroics was slow and tedious, so for her current life I’ve been leveling with a barbarian that I created on one of my alt accounts. Of course this limits me a bit, as that account does not have access to all the same content as my main.

Since I’m not a big fan of running low level heroics, and since I’m dual-boxing my TR, I basically only run Firetha when I’m too low on time to run one of my other characters, or when the mood hits, which isn’t that often. Due to this, Firetha’s levelling is going rather slow, yet not as slow as it did on Cannith.

So, what does the future hold for Firetha? Currently I don’t really know. There’s no long time end game plan for her, as she was made as a just for fun character. I’ve been making it up as I go along. For the time being the plan is just to do 3x caster lives, after which we’ll see.

is what I wrote as the guild message in Destiny before I logged off and sent in the transfer ticket yesterday. The auto response said that it could take up to 10 days for my errand to be handled. Still, a friend of mine transferred one of his toons a year ago or so, and it was supposed to take 3 days, but took 1. I was hoping that it would take only one for me too, and I could not wait to get home from work and check if she had been transferred.

Yay! She had. Her name read Keronna-1, but when I logged in I found myself guildless (with the text ‘you guild has been disbanded’ in guild chat), and her name was Keronna, without the 1. 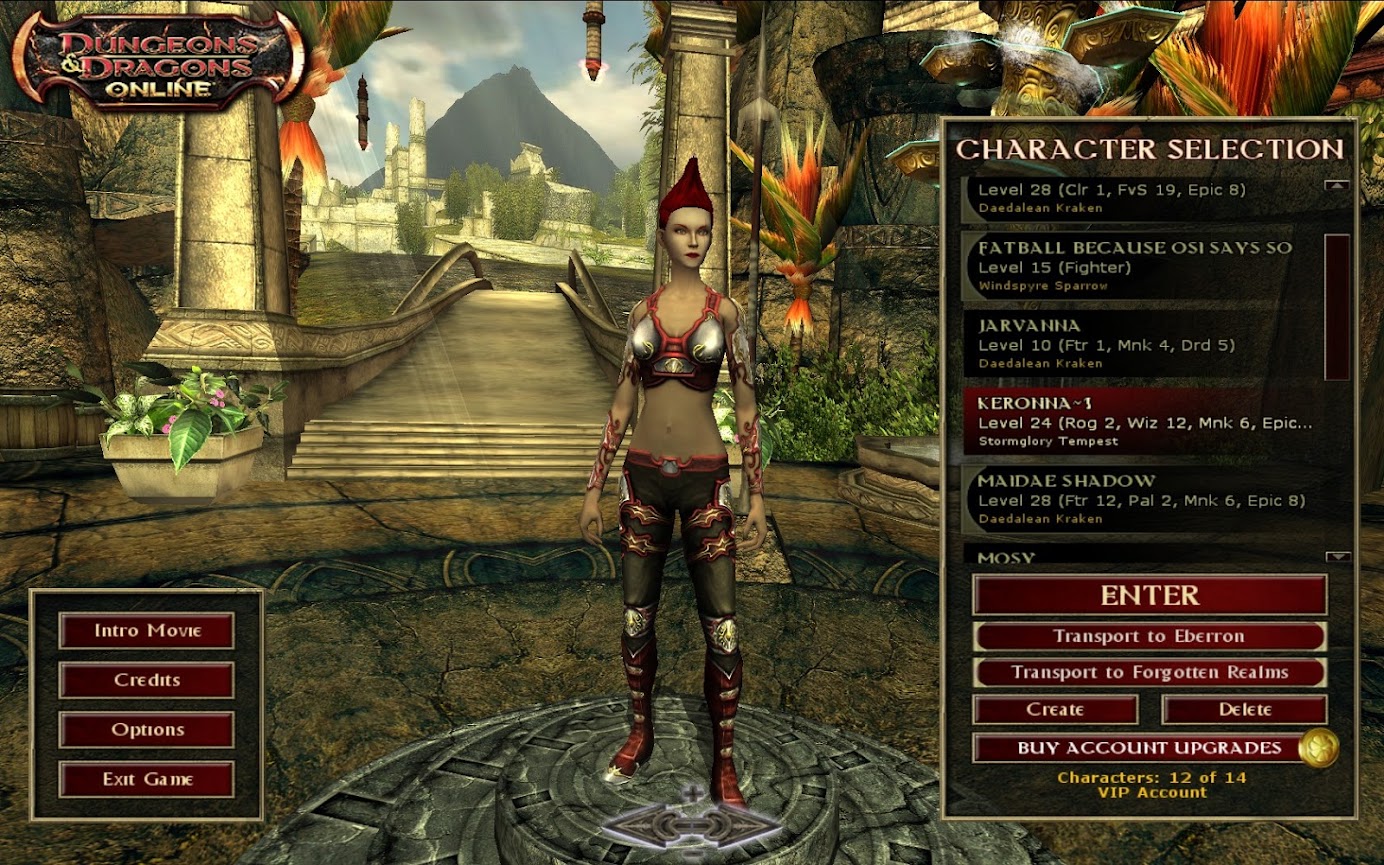 END_OF_DOCUMENT_TOKEN_TO_BE_REPLACED

I made a toon on Cannith back in May 2012 (see Starting over on a new server),  to join Shin’s guild that he had made for myddo writers (mostly). I quickly joined up with Nessana and Domfig (Noob…something was his toon), and we were later joined by Keava and Rilosa. Domfig left us because of irl stuff.. and Keava jumped ship after some disagreements about how to run quests. So left were me, Nessana and Rilosa. We were one time joined by Godscraft and Komrax, but they only ran with the group once and never came back (the toons are still in the guild). Catonrocks joined us after we were a bit into our TR and he stayed with us up until this week, when he announced that he’s not coming back. Nessana left us some weeks ago, because he had gotten tired of ddo and was quitting it all together.

We hit 20 not too long ago, we’ve flagged for CitW and last and this week we ran epic 3bc… even though they were a bit tough for us. My toon hit 23 last week, the others are/ were still 22.  I have been thinking of bringing my toon to Orien, but at the same time it’s fun to see how the other servers are doing.. it feels different. I’m not sure if I’m ready to quit on Cannith yet.

Some pics from this week:

The trio in Prove your worth 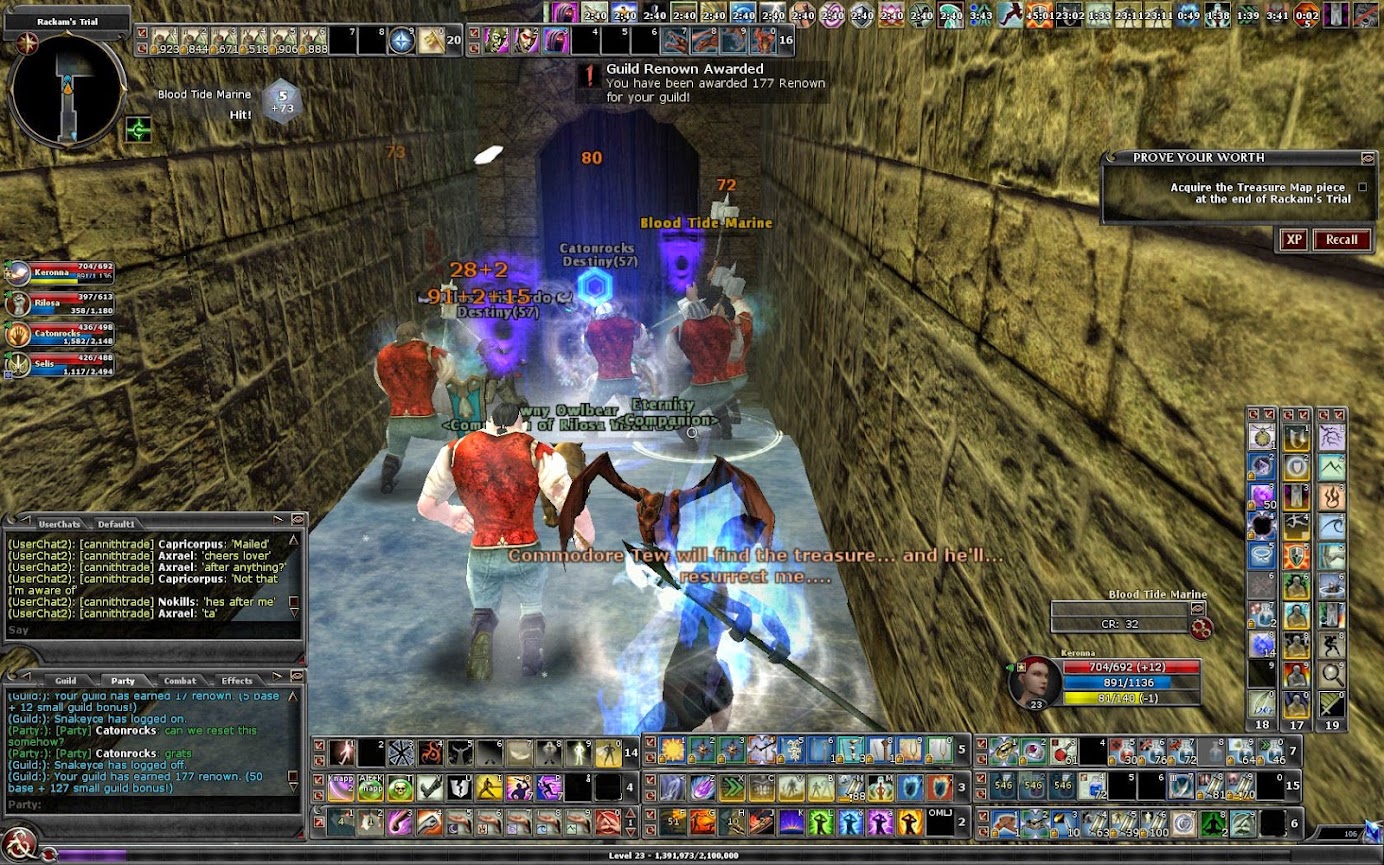 END_OF_DOCUMENT_TOKEN_TO_BE_REPLACED

My guildie suggested I make a gif of Keronna with wings, and I realized I wanted to do it. This could have been done much prettier, and I think the wings are sitting a bit too low one her.. I mean.. well you’ll see. Click on the image it vie the animation. 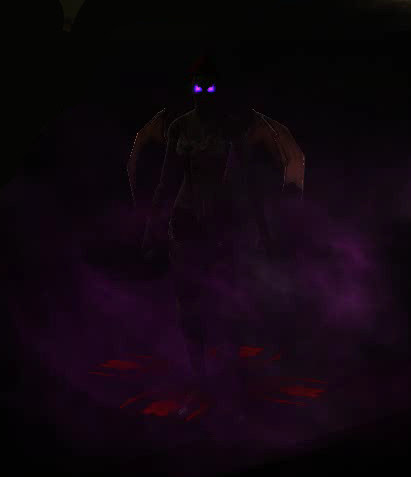 If you look at it closely you can actually see the dragon behind her, lol. I could have just cut and pasted the wings on her and made an animation from it, but that would have been more work.

Alrighty, that’s all for now. I might do a better blog tomorrow.

While I was waiting for the last of our current trio to arrive on Cannith, and the degus were out, I was browsing the store for cosmetic armors for Keronna. I settled upon Crimson Royal Light Armor, after which we joined up with someone from social channel in shroud. Shroud is a different story, though. After shroud I was just showing my guildie my new cosmetic armor and he said that my cosmetic dragon was just flying behind me, that you could only see his wings. I did already say during the Shroud run that Keronna kind of looks like an angel when I cast Tenser’s . So I decided to see what Ker looks like with the dragon flying behind her. I believe I am looking at a dark angel. What do you think? 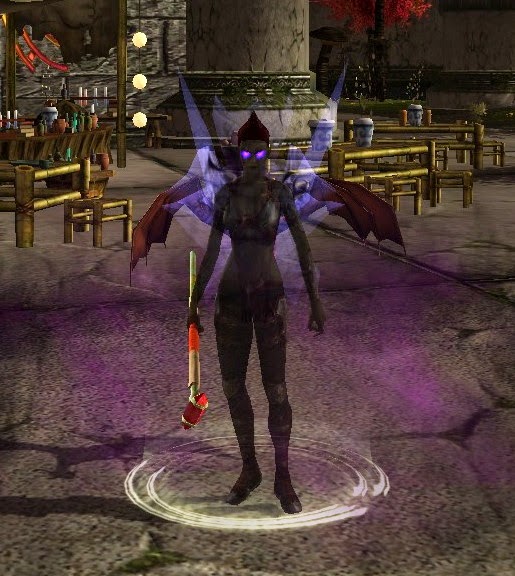 P.S. If you missed it, Keronna is currently 12 wizard/ 6 monk/ 2 rogue / 2 epic and runs around mostly using Shroud of the Wraith.

I logged on to Cannith tonight to find this: 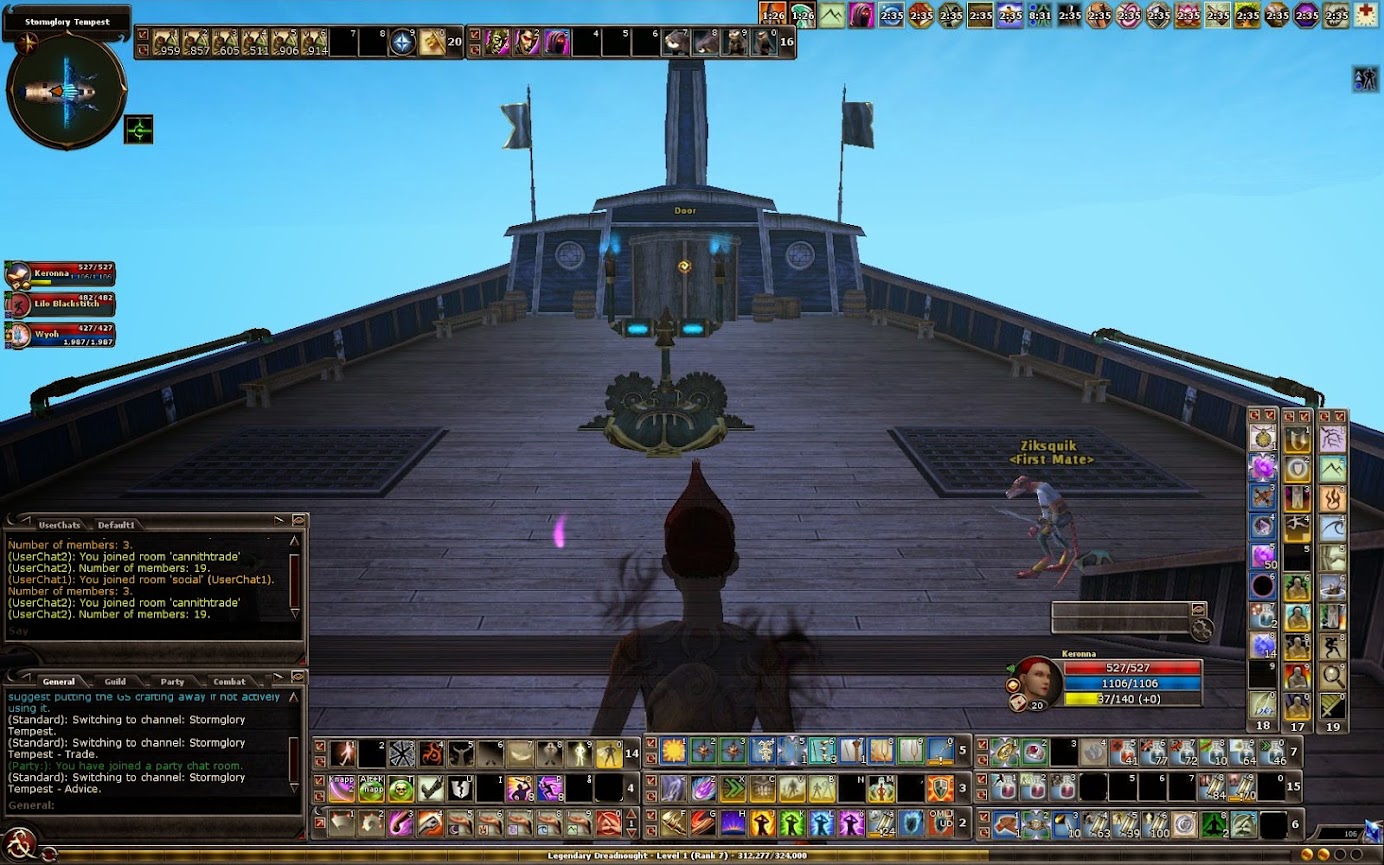 If it didn’t click for you right away, Lilo and Wyoh are both hirelings, and Wyoh has the star! The funny is, that except for the fact that I log on to find them in the party, they’re not even my hirelings! lol. My guildie used them last time we quested together.

Thank you for stopping by and take care. 🙂

We TR’d September 3rd and tonight my wizard monk finally hit 20 on her 2nd life. The reason it’s taken this long, is because I’ve run her at the most one night a week, and only for a couple of hours at a time. I must admit I have been getting more excited with the levels, as she’s been dying less and doing more damage. 🙂 I redid her enhancements tonight, I can’t say if this is the ideal way to do it, but I’m gonna see how I feel with these and adjust if needed. Keronna is not wearing any epic gear yet. 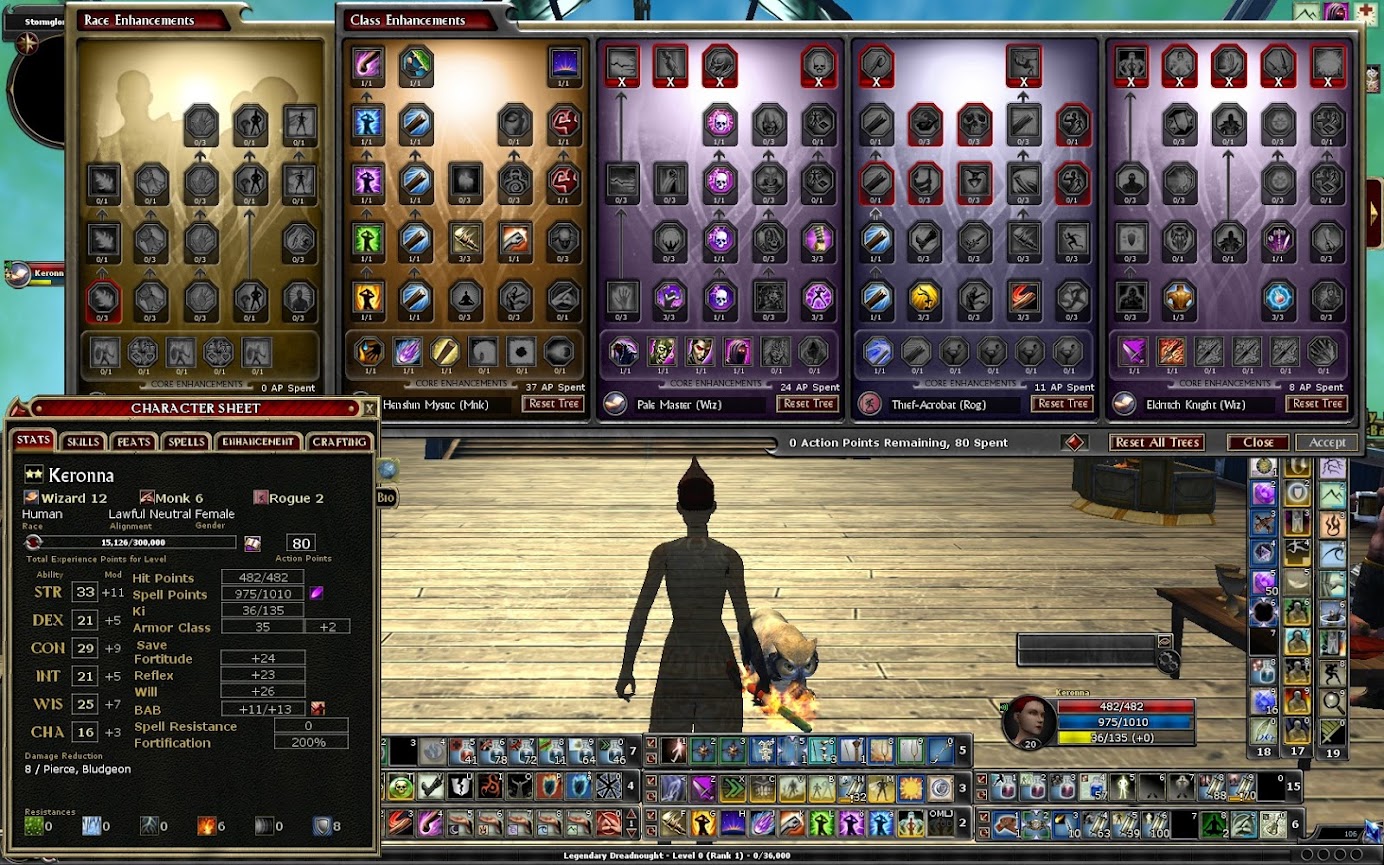 END_OF_DOCUMENT_TOKEN_TO_BE_REPLACED

Tonight we (the static group) were running Mirror Darkly heroic elite on Cannith. I was leading us through the way I usually run it to get it done without too much extra fighting. Anyway, we decided to do the beholder optional and lo and behold, the shadowsight dropped for Cat and he passed it to me, since I guess I was the 1st to ask for it. As I was already wearing wisdom goggles, I equipped them asap. 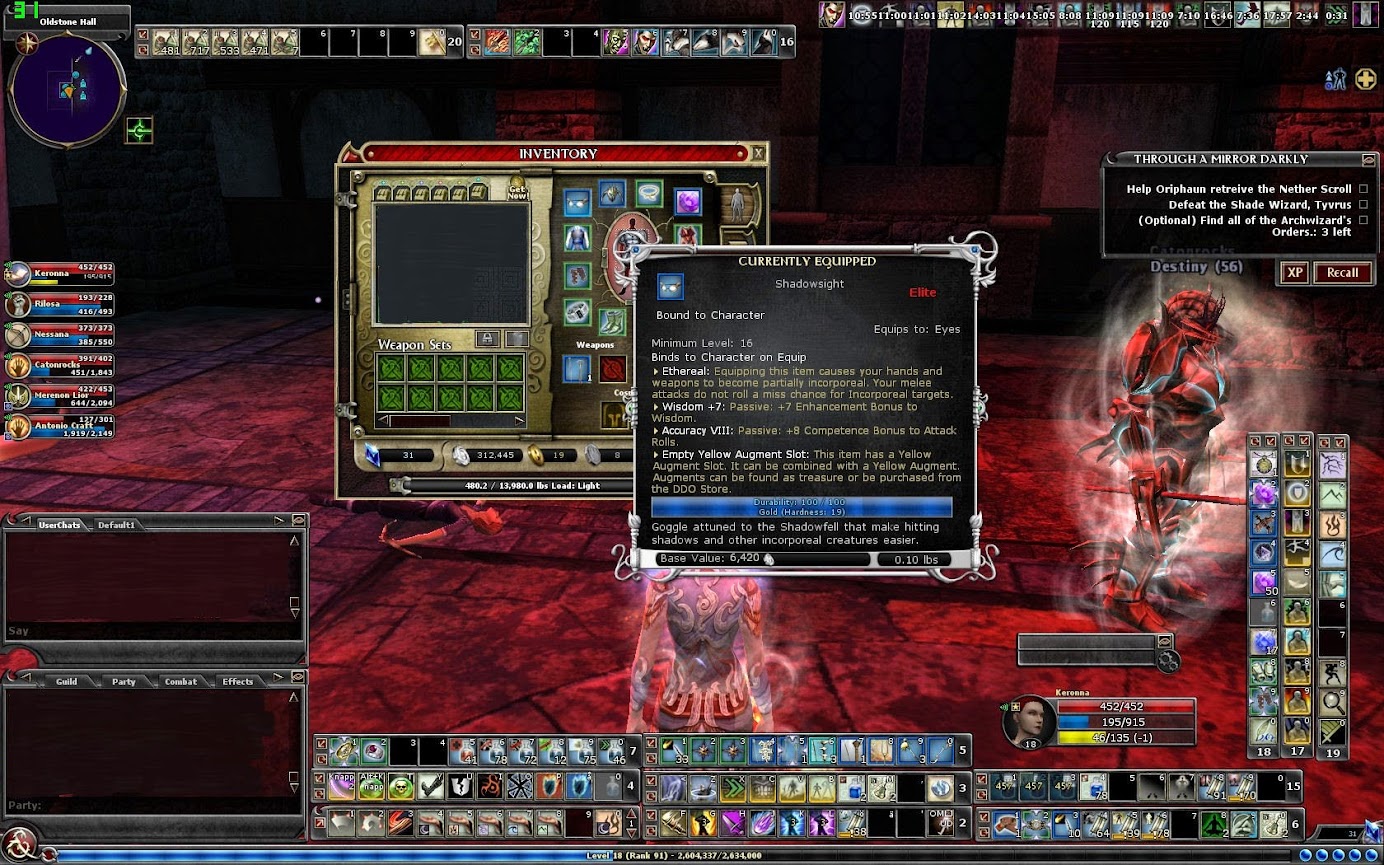 And then, as we’re looting the end chest, the goggles drop again, and this time for me. I pass them to Ness without thinking about it, and later I find out that Rilosa would have wanted them too. Meh, sorry.

END_OF_DOCUMENT_TOKEN_TO_BE_REPLACED

I was going to email someone and tell them a bit more about what and how I’ve played… but thinking more about it I don’t think they’d have enough interest in it, so I’m better off just putting it here, lol. I started playing ddo in the start of August 2011. At first I was only playing a few nights a week, and just with a friend of mine. Trying to keep up with him, I added gaming time and at some point I became addicted and added even more gaming time. Now for a good while over 2 years I’ve been playing 20-40h/ week, and I play 7 nights/ week, unless I have some activity irl that makes me unable to play (I do sometimes socialize irl too, you know.) Anywho, here’s what I’ve done so far.

Cap 20: 10
When I started playing ddo level cap was 20. I was going to put classes/ toons here that hit 20 at that time, but since I have not capped all my toons at end cap before TR, I’ve put here all toons/ lives that have reached 20.