From DDO wiki: “Evasion: You can avoid even magical and unusual attacks with great agility. If you make a successful Reflex saving throw against an effect that normally deals half damage on a successful save, you instead take no damage.”

Evasion, the wonderful little feat that feels so sought after. Some people refuse to run toons without it. When my cleric monk on the Cannith server first got it, and I started seeing “evade” pop up on my screen, I got all giddy. I’m evading stuff, woohoo! My wizard Cerge just got evasion as well, when I took second level of rogue at level 9. And like with my cleric, seeing that little word pop up on my screen “evade”, gave me a sheer sense of joy.

But, how important is evasion really? For evasion to be any use at all, you need a high reflex save. It’s all about the reflex save, without it you will never evade anything. I have played toons with evasion and toons without. I must say it is fun standing on top of a blade trap and just watching my screen “evade evade evade”, and taking no damage (improved evasion makes you take no damage at all on a successful save). But, with a high reflex save, you may take half or no damage as well, depending on the situation. This is why I find the high reflex save to be more important than evasion itself.

Still, saying all of that, my cleric monk has evasion, and now my rogue wizard as well. For Maidae’s next life I plan to make her an evasion barbarian.

Thank you for reading and have a wonderful rest of the week.

After only 3-4 h sleep the night before, and working a long day, I was kind of tired and a bit testy during our game night. I took offence to ppl saying that our group is low on hp (well u do better on a 1st toon on a server with no gear or pls, and Ker is even only a 28p build). I thought Ker was doing just fine, I’ve seen worse. At level 20 she was ~380hp unbuffed, and that is with only con+6 and +20 false life. I can easily get that higher once I get some gear. But we only run a few hours once a week, so we’re not exactly gear farming.

Anywho, plan for the night was to run first Eveningstar chain, and we decided to lfm for help so we could run on eH. I think we would have been just fine the 3 of us with hirelings too. Our toons are very much underdogs, but I was pretty pleased when my level 20 clonk with almost no gear managed to insta kills a few mobs with destruction and implosion in a level 22 quest. 🙂 Now, that impresses me a lot more than loads of hp.

Anywho, here’s the pictures from the night. 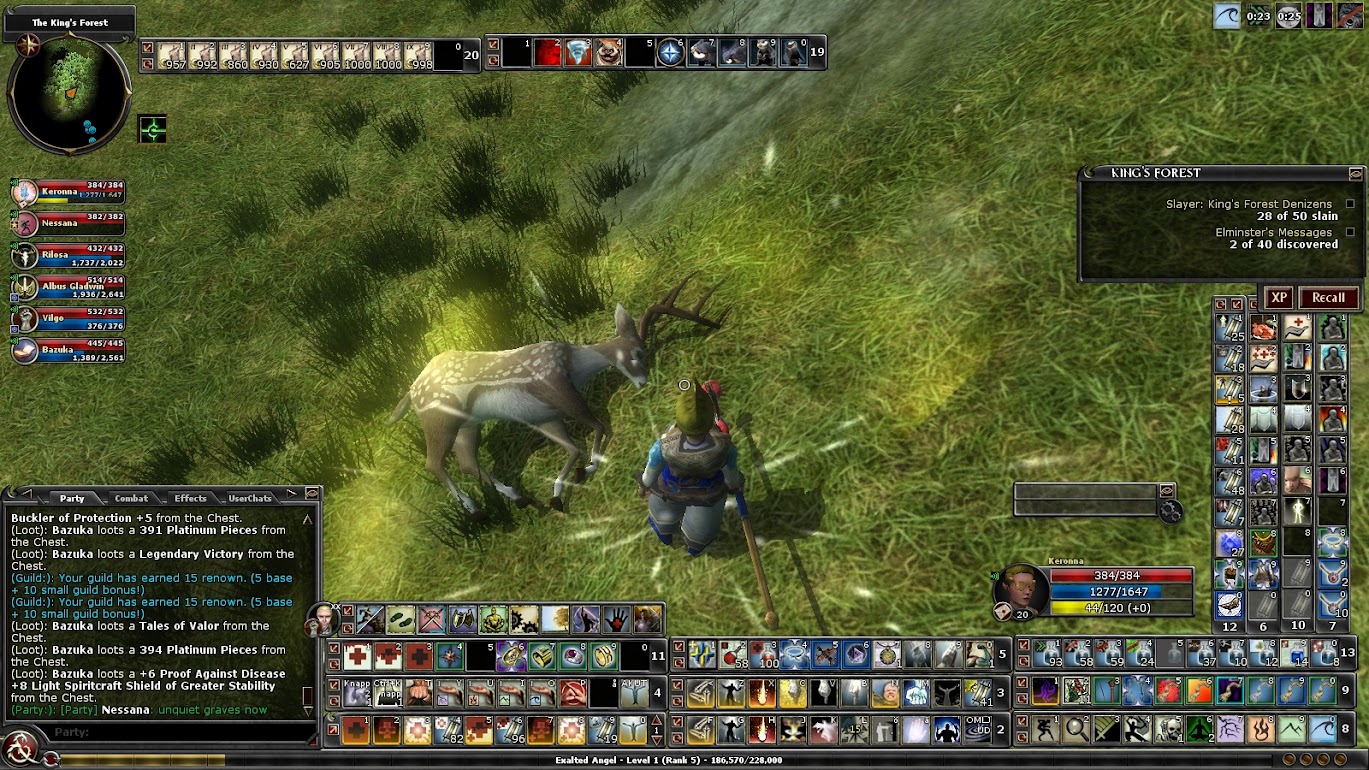 Keronna was sad after Ness killed a deer.

END_OF_DOCUMENT_TOKEN_TO_BE_REPLACED 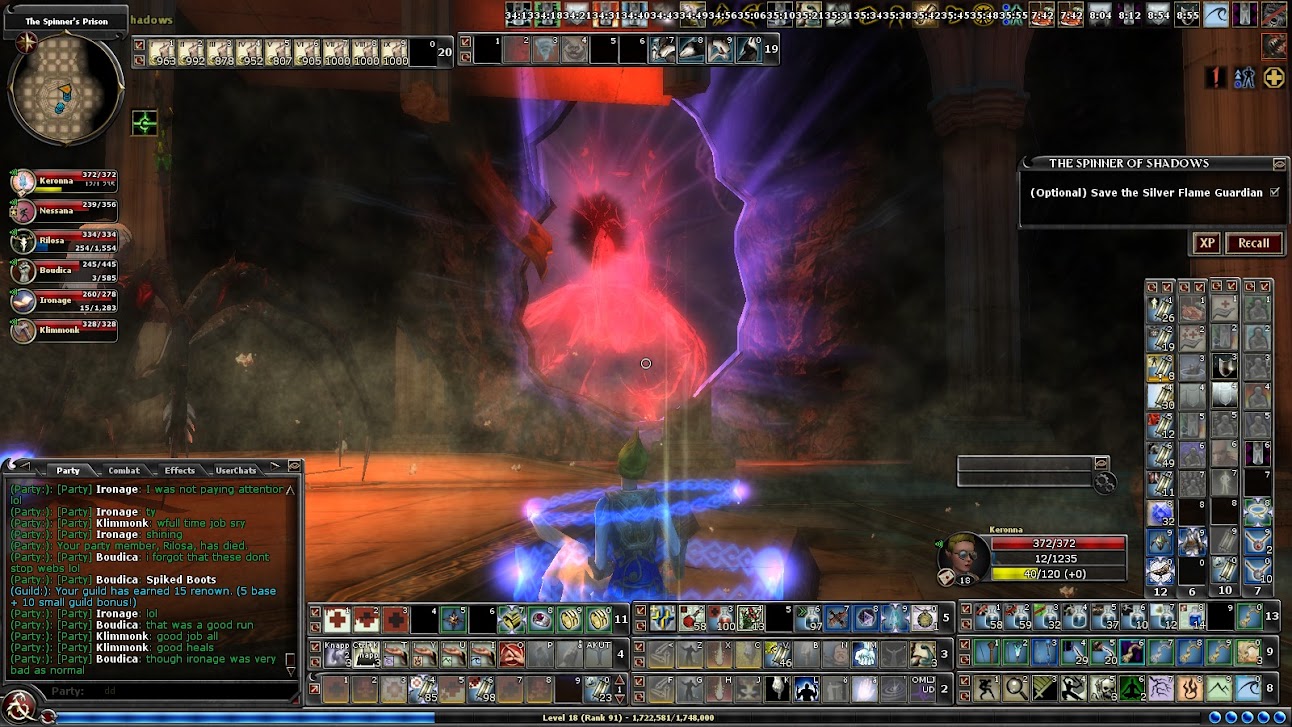 END_OF_DOCUMENT_TOKEN_TO_BE_REPLACED

March 1-10, 2013, Micki decided to make the most out of Crystal Cove and spent all gaming time there. 🙂 Two fridays I got to run on Cannith, and the rest I spent running on Orien, during the week Maidae and Jarvanna and on the weekends Thazara. The most shards we got running CR30, but not all groups were good enough. On Sunday morning I was done with Cove. Here’s the end result.

Items from last year upgraded from tier 2 to tier 3:

END_OF_DOCUMENT_TOKEN_TO_BE_REPLACED

I feel so bad, I haven’t blogged in a long while (for me, seeing as I went from blogging almost every day to 1-2 times a week and now nothing). I’ve been stressed. Trying to make time for everything, and give DDO enough time. But, I have been waiting for Cove, and my plans was to run Cove exclusively this time around for the 10 days it’s on. I’m passing on the raids and most of the quests for Cove. We’ll see this weekend, I might end my Cove runs before Sunday night, donno yet.

I started on Cannith with Keronna, getting her a ring and a trinket (the only useful items for a clonk). I’ll upgrade them on Friday. Then a few runs on Orien on our lvl 10’s with my sister (we duo’d with my hire and wolf protecting center, me torching, sis scouting). Then the weekend I did two openings at lvl 18 on Maidae and the rest on Thaz, first running lvl 26’s and then switching to 30. We learned that even with 200 over quota u make 400+ shards, with 300 over quota 500+. Nice amount of shards. Yes, the mobs are a bit tougher at CR30, but it’s supposed to be a challenge, no? 🙂 More than once I ran off down to the bowling room on my own, aggro’d too much stuff, got hit with hamstring and killed. Heh, but who wants to play safe?

END_OF_DOCUMENT_TOKEN_TO_BE_REPLACED

Aargh! The lack of time.

So, U17 is out, and I’ve yet to try it. Any of it. And there is a Cove preview out, haven’t checked that out either. Feels like everyone’s progressing, and I’m just stuck.

I have goals, a lot of goals. It’s the reason I go on. My goals. Everyone needs goals. My goals for my toons are as follows.

END_OF_DOCUMENT_TOKEN_TO_BE_REPLACED

So, as I’ve mentioned previously, I’ve recently had my winter vacation from work, and spent most of that time playing DDO. Yes, I know, I’m a bit of a loser, lol, but I enjoy socializing in game more than irl. 🙂 And since I was able to run earlier in the day, I got to run with Cleazy all week as well, which I usually only get to do on Saturday nights/ Sundays. So, what have I done this week and last weekend? Let’s see…

Thazara
Ran some raids; 3x CitW, 3x hard ToD, 2x eADQ, hard shroud, elite shroud (+ one noob party wipe on elite), 2x eVON, 1 Reaver’s and 1 VoD. Worked on getting epic elite favor and some from challenges, worked on levelling/ capping her current ED and did some loot farming. Picked up the Holy Symbol of Lolth when working on Thaz’s 3rd ransack of the chest, and got the Twilight from a lucky roll on the last CitW. 🙂 Thazara has capped Unyielding Sentinel, Exalted Angel, Grandmaster of Flowers and Legendary Dreadnought. She is currently leveling Shadowdancer and is at level 2. After this one she will move on to the arcane circle. Thazara has run all quests and raids in game on elite, except MA normal, LoB and CitW hard.

END_OF_DOCUMENT_TOKEN_TO_BE_REPLACED

This week I’ve been on vacation from work. I was going to sleep, do household chores, exercise and play ddo, but come Tuesday I got hit by a bad cold and have mostly been playing since (well, I did do household chores as well, and took care of the degus). 🙂 I’ve worked on getting Thaz epic elite favor, ran some raids, worked some on gaining xp for my TR Maidae (she’s currently holding 16) with the help of TorGrimorde and even Jarvanna and Keronna got to come out and play some.

Loot, loot, well moot on the loot. Cerge got his torc on the 20th ADQ and Thazara got her Symbol of Lolth after working on her 3rd eH ransack of the chest where it drops. I also picked up a few +3 or upgrade +3 tomes. I didn’t remember to take too many pictures, but took a few here at the end of the week of some memorable moments (check my epic elite post for others). 🙂

END_OF_DOCUMENT_TOKEN_TO_BE_REPLACED

In wait for U17 and epic gianthold, Maidae and Keronna have finished running Gianhold walkups. The three at the moment flagging quests will be left for a little later. I’ve again slept too little and on Thursday the game refused to let me in after a dc, I’ve not remembered to take too many pics. Did a few raids (my normal Wednesday shroud didn’t happen), including lfm’ing for CitW for the second time, and having Ana for the first time. On Friday after Cannith night Jarvanna got to come out and play for a while (did a few quests duo with sis’ druid).

END_OF_DOCUMENT_TOKEN_TO_BE_REPLACED

As requested by Malinza, here’s Keronna’s original build plan. To answer the question, “why dump str?”, well, it’s simple. Sorcerer dilettante requires min 13 cha. I wanted even numbers so made it 14. With 18 wisdom and 14 cha, I didn’t have too many points left. I wanted 10 int, as 10 gives you 2 skill points per level instead of 1 with 8. And what was left I put in con. As you can see, I left con at only 12.

I took extend as one of the first feats, but swapped it for empower a while later. I have reset the enhancements once and picked Follower of the Sovereign Host instead if Undying court as Radiant servant pre. This is only the guideline for the build, I have not followed it to 100%.