1. Killing Time LH
I decided I was going to try using discord voice chat for the raids, and fiddling with that kind of stole a big part of my concentration for the raids. Still, most of the party joined the voice chat, and I was only using discord voice for at least the first two raids. If you haven’t joined yet, Orien Raiding discord is the place to be (https://discord.gg/PKDxEtg). For KT, Osi was tanking, Arrowhavoc shadow kiter and Titus Nyt tank. I forgot who kited dogs. We had some deaths, probably because I was distracted and didn’t heal ppl, lol. Completion time: 25 min, 51 s. Loot: 84 time runes, 24 threads of fate, I think no named items. 2. Riding the Storm Out R1
Since RSO is right next to KT, I picked that one next. I wanted to leave THTH last to give Leo a chance to join us. Osi has said before “R1 with a full party”, so I told Gaijya R1 when he wanted to step in and go afk. Someone forgot sheath, and I said it was fine, but they’d probably die a lot. I attempted to keep ppl aware of the Eye of the Storm timer, yet we had ppl die pretty much every time the mass spam hit. On completion I jokingly said ‘according to my report, we had no deaths’ :). We’ve gotten the hang of this raid and even with some deaths, it was mostly smooth. Completion time: 40 min, 14s. Loot: 125 kor kaza runes, 25 threads of fate, Arm of the Aggressor, Azure Guard, Cobalt Guard and Discerning Gaze. 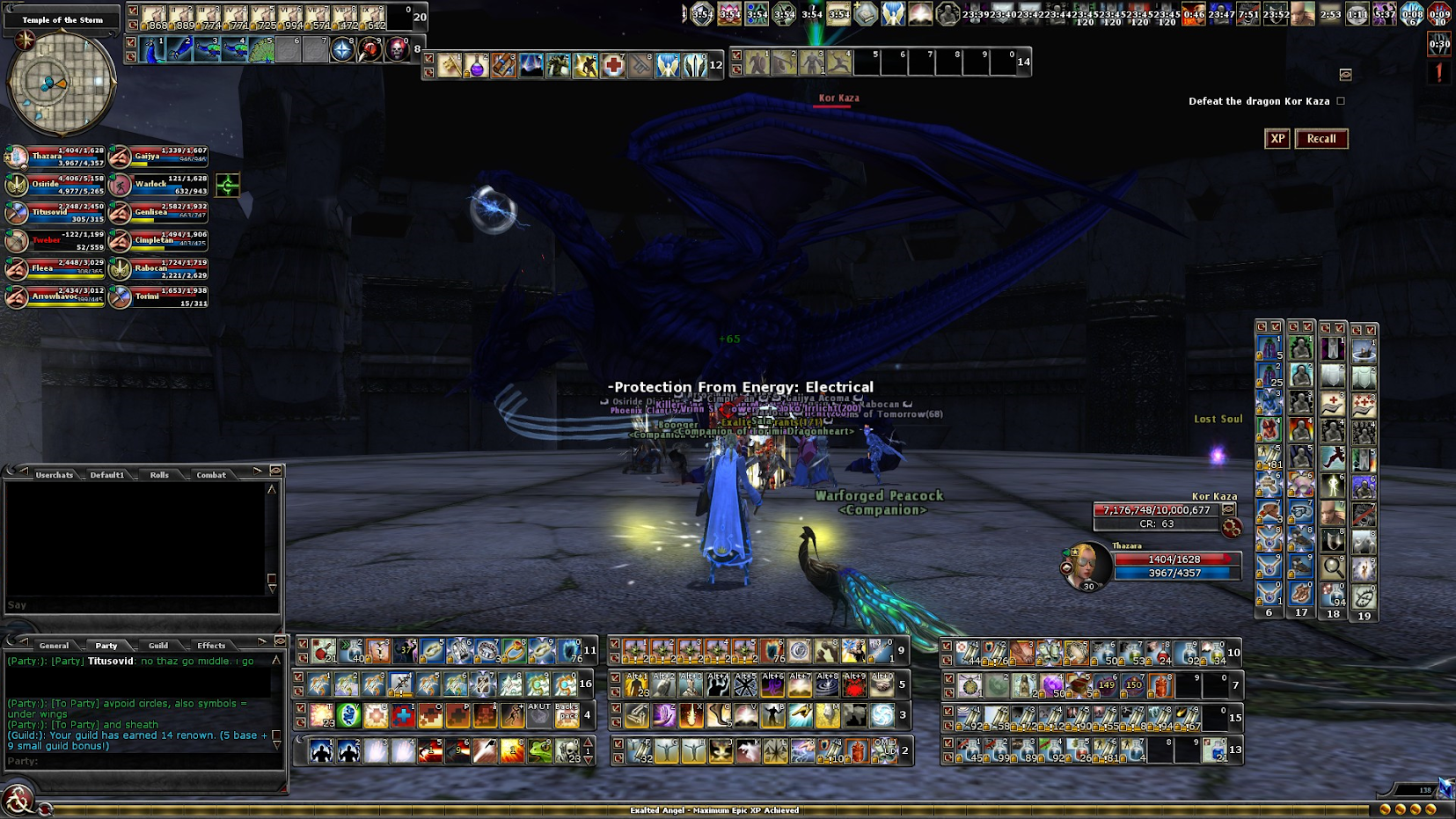 3. Too Hot to Handle LN
We lost about half the party after RSO, and even though most spots filled quickly we didn’t get a CC. After about 20 min waiting I asked Storms for help, and just a he was logging, Torimi tells me Leo is logging. Since I had specifically asked S to help us, I couldn’t give Leo the spot. The run was easy and T said we need to start doing hard runs soon, or this will get boring. I forgot to screenshot the quest report, but the run took about just over 10 min. Loot: 64 forge runes, 25 threads of fate and Tattered Scrolls of the Broken One which I got (was passed) and which completes the Legendary Flamecleansed Fury set for me. 1. Too Hot to Handle
Since Devil wasn’t joining us and all my other Sat raiders were online and ready to go, I suggested we start with thth. Ara was asking about CC, and I said I had intended to do that (not alone of course). Leo is good at CC and sun bursting, Tentyn joined us as another caster and Quilo was there to sunburst. I had just swapped out 1 point of wisdom to get enlarge and was ready to do sunbursting, destruction, slay living and greater command. When Max joined and later asked if he should help with trash, I told him to focus on boss, as we had a lot of people on trash, but were a bit low on boss dps. Completion time: 17 min, 44 s. Loot: 64 forge runes, 25 threads of fate. 2. The Curse of Strahd R1
I let the guildies pick the next raid and Strahd was chosen. I stepped in on R1 realizing as I did so that Osi might have wanted to try a higher diff. In the first fight I got aggro of one of the red named shadows and died. I spaced – started my macro which I usually don’t do in that fight. We had a few deaths from grip and I realized that my only insightful wisdom item was my trinket – swapping to the holy trinket lost me 9 wisdom. It didn’t seem to matter, though, as I was still frogging and imploding skellies on the stairs. Only 2 deaths in cards part and for the endfight Osi took Strahd and Vintovka brides. Completion time: 32 min 38 s. Loot: 125 strahd runes, 26 threads of fate and Echo of the Tome of Strahd which dropped in my name and I decided to keep. 3. Killing Time LH
Some wanted to do KT, and we lost 1 party member. I asked in channel and Cuyar was invited. I asked if Osi wanted to do elite, but he said he’d only do it with two good tanks, and we didn’t have that. Party was ok with a quick hard so we could do a shroud after. I didn’t feel I needed to explain much. Osi tanked dragon, Dobroye kited shadows, Tahlua was Nyt tank and we didn’t have one assigned for LoB. Completion time: 27 min, 53 s. Loot: 84 time runes, 24 threads of fate, at least two schism and Chaosbow. 4. The Codex and the Shroud LE
I’m not a big fan of this raid – it usually puts me to sleep. I was planning to bring Thazmaniac for xp, but after switching to her I remembered I never actually ran the flagging quests, so I switched to Cerge instead. When I got to Meridia, most were already in – on elite (we had discussed doing hard for speed). Part way through part 1 I started wondering how we’d do the crystal in part 2, since we didn’t have a hurler and only one person with greater ruin. When we got to part two, after prepping the red named we were 4 or 5 who stood waiting by the crystal and took it down before the reds ran back to it. Puzzles went fine, part 4 was fine. In part 5 we had some deaths (even me, I blame it on dozing off), but we completed without issues. I forgot to screenshot the experience report, but we completed in about 40 min. Loot: mats and 62 + 62 + 62 + 95 codex runes and 11 + 11 + 11 threads of fate. Since Shroud makes me really sleepy, I didn’t feel like running more after it.
That’s all for raids 133.
Thank you for stopping by, and do join our raiding discord if you haven’t.