1. Too Hot to Handle LN
I logged on, invited people from channel who were interested, then put the lfm up. Storms told me we might struggle to fill since Matrix just ran this raid, but as soon as they completed, the people from their raids joined mine. I was a bit thrown when some said ‘it’s only normal’ (I haven’t found normal to be easy just yet), and didn’t quite know if I should give people roles or not. I was testing out a gear swap and then got insta killed by a doom skull. Completion time: 15 min, 40s. Titan tank: Carlinee. Puzzlers: X and Doobrey. Loot: 64 forge runes, 25 threads of fate. 2. Killing Time LH
When I logged on for the night, the raids ppl wanted to do were THTH, KT and RSO, so after completing THTH, and the people who only joined for it had left, I posted on the lfm. I accepted everyone who wanted in, which meant we didn’t know how the group dynamics would work out. The run was called ‘chaotic’ byt Ara and some others, but we managed to push through. I don’t know about the rest, but I had fun 🙂 Completion time: 33 min, 39 s. Loot: 84 time runes, 24 threads of fate, Trinket of Freewill, Brilliant Crescent, Clouded Dreams and at least 2 schisms. 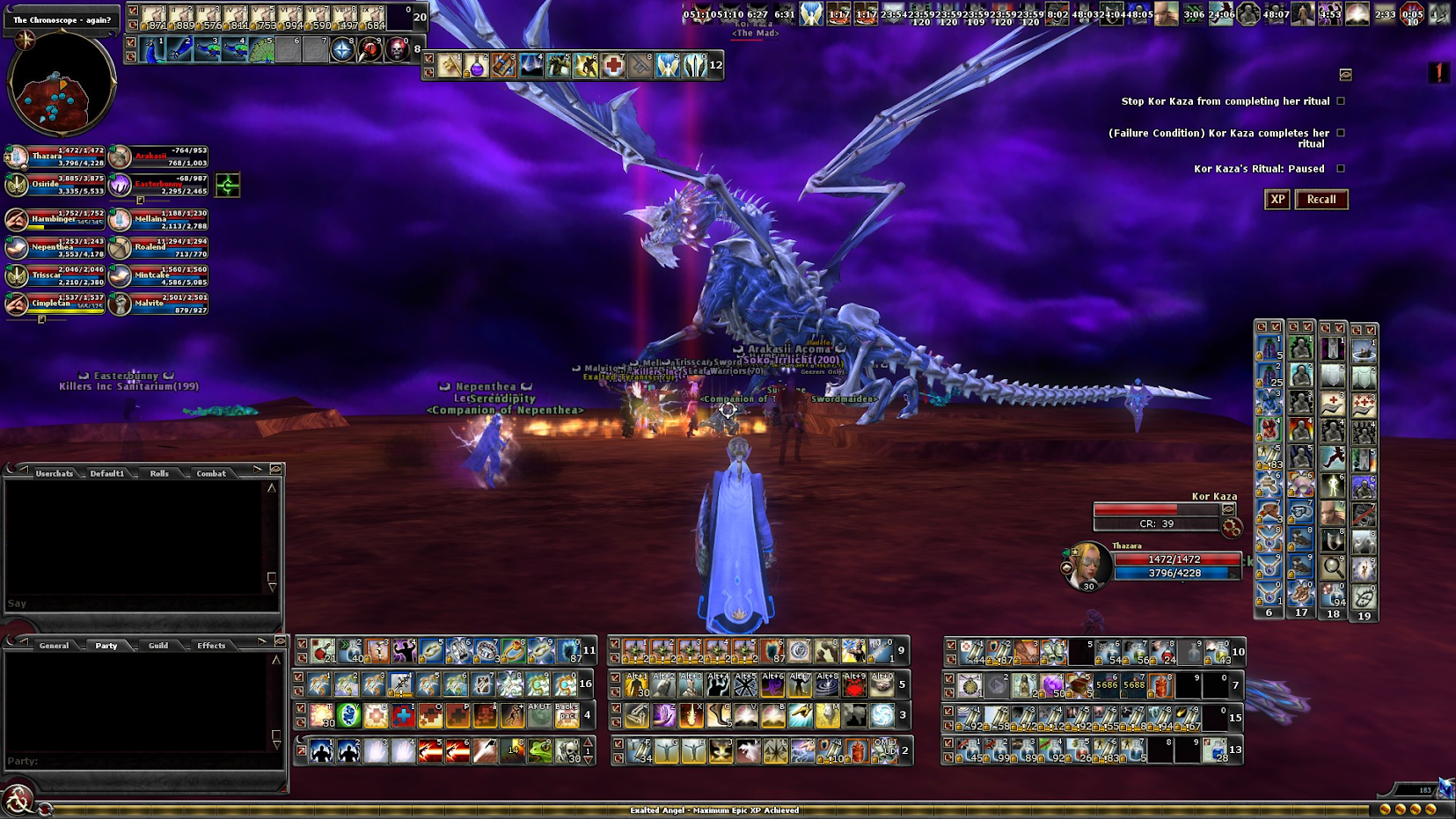 3. Riding the Storm Out R1
We had 1 free spot that was filled quickly. R1 has become our default difficulty and it’s been going quite well (in my opinion). People making sure to remove stacks of storm magic as well as paying attention to when the mass spam is going to hit has helped a lot. Completion time: 34 min, 29 s. Loot: 125 kor kaza runes, 25 threads of fate, Acidic Insignia and Azure Guard. 1. Too Hot to Handle LN
Saturday started out unusually slow. I’ve felt that ppl usually are online waiting for the raids, but this time interest seemed low. I decided to post for thth and we soon after filled. I thought we had a good group – we had two sun bursters + me as backup, Osi and Ero as fvs and a warlock. Part way through I was told that we needed cc. I guess need isn’t quite accurate, as we made it through – and the raid only took about 2 min longer than it did on Wednesday. I guess we could have saved ourselves some of the chaos with cc – but I was quite happy with our effort anyway. Completion time: 16 min, 52s. Loot: 64 forge runes, 25 threads of fate and The Everstorm, Maelstrom Courser. 2. Killing Time LE
I believe I decided that we’d do KT next, but then let Osi, Komrad and a few others discuss the difficulty. Elite was chosen and they had a plan, which part way through the raid changed. Osi and Komrad were our tanks, but Osi was also our shadow kiter so we needed a different tank for Nyt. Titus took the job and shadow part was smooth – after an initial re-strategizing before the rift. Our dps may have been a bit low, but the group listened and avoided circles as well as took trash out in a timely manner. Over all I was quite pleased with the completion – which was my first elite. Completion time: 71 min, 46s. Loot: 125 time runes, 28 threads of fate, a +7 to +8 con tome, Elyd Charm x2, The Staff of Shadow, Bracers of the Mountain and at least 3 schisms. 3. Riding the Storm Out R1
Since we’ve been doing KT and RSO as a pair, I decided we should continue with RSO. When asked the diff, Osi replied “the usual” – so I said R1. I was looking at activating discord voice chat for this run, but wanted it set to push to talk – but I didn’t have a practical keyboard key for it. I got a few tells to kick the person who didn’t enter the raid, and I had missed if they were going to come or not. I invited Madzombie and then Ara had to go so I invited Talelin. During the last puzzles, I wasn’t really paying attention until the mass spam hit – and I was suddenly up in 17 stacks of storm magic – 17 being the fatal number. During our run back to the dragon after shrining, one of my rl door slammed shut, I jumped and somehow managed to move my 10th hotbar up in the corner of my screen, lol. Completion time: 41 min, 3s (with waiting inside). Loot: 125 kor kaza runes, 25 threads of fate, Flame Insignia, Cerulean Guard and Bluescale Guides x2. 4. Legendary Tempest’s Spine R2
I asked the group for suggestions for more raids, got a list and I picked LTS. This raid is quick and usually quite easy. I decided to stop and kill a fire ellie on the way to the front door, and later got killed by a reaver when I tried to do the same – he hurt. Osi was showing us that he can tank Sor’jek – I was quite impressed. I’ve never seen anyone successfully stand there and not die. Completion time: 14 min 14 s. Loot: 125 Tempest runes, 19 threads of fate and Breastplate of the Celestial Sage. 5. Old Baba’s Hut R1
Baba and Strahd was suggested, I chose Baba, posted and asked Osi to do the teams. Except for the fact that I was sitting most of the first round under the hut I felt it was a mostly smooth run. My side ran into wisps in the second round and at least 3 party members died (I stopped out of view of the wisps because I didn’t want to die). We had some more deaths from wisps outside, but the baba fight was very smooth. Osi tanked the shamblers flawlessly and the party had so much dps that we almost didn’t get the debuff (debuff only hit us when baba was close to death). Completion time: 38 min, 43 s. Loot: 125 hut runes, 24 threads of fate, Echo of Ravenkind, Torn, That Which Renders Despair x2 and Memory of a Tailor’s Duress. That’s all for raids 132.
Thank you for stopping by.