Raids week 130 happened July 3 and July 6. Here are the highlights.

Osi had joined Matrix’s THTH when I logged on, so it was just me, Leo and Azzallea. Hamster joined and after waiting about 15 min I figured we could do a quick mod while waiting for more to join (I posted for hox). I stayed center while Leo and Azz did the rooms, which was going fine until people started joining the lfm and I got distracted. I got in trouble with beholders and some time after we killed the death knights we wiped (Hamster wasn’t flagged so was sitting it out). A jibber’s was used and we completed in 11 min 6 s. Loot: 7 masterwork tapestry shreds, 8 threads of fate, 64 death runes (I think, as I forgot to screenshot them) and Epic Litany of the Dead. Leo and Azz didn’t want the Litany, I had the old version so said I could grab the new one (lower min level), which meant throwing my current one away to buy it back after putting the ml 26 in the bank (they’re exclusive). 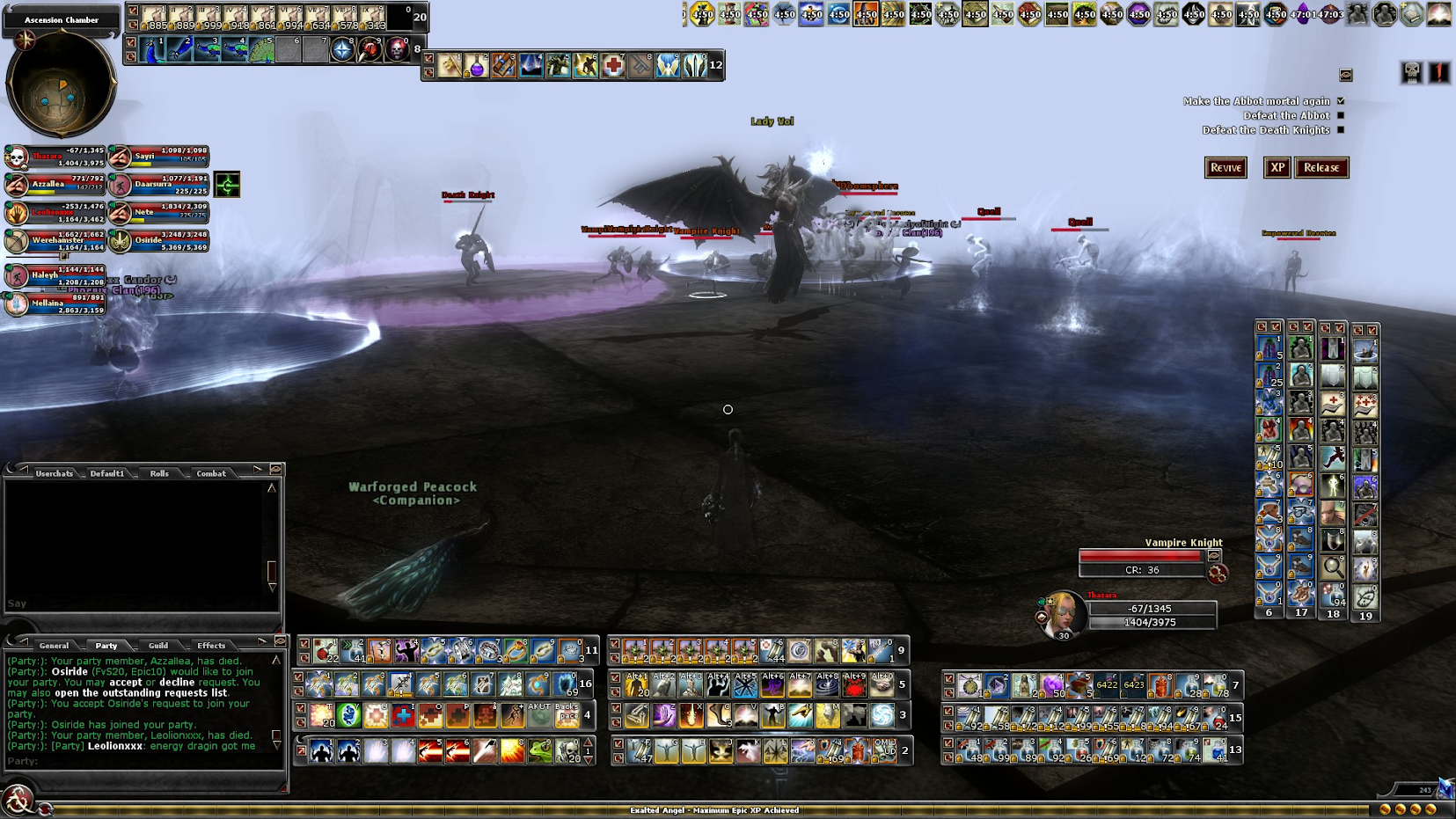 I got very distracted by the mod run so when Osi entered elite, I was mostly going with it, not really leading. Usually I make sure we have a good charmer and buffs for the puppies etc, and things might still go sideways. The charmer somehow missed when charming and wasted 3 charming stones, which I believe is where it failed. When the big beholders spawned I called fail and we recalled. Someone left the group and was replaced by Torimi and I wanted Torimi to do the charming even though she hadn’t done it before. I gave more instructions to the second time around and charming succeeded as well. Second time around was a success and the raid completed in 15 min 29 s. Loot: 10 threads of fate, 125 Xoriat runes, Leathers of the Celestial Avenger, Leathers of the Celestial Archer, Scalemail of the Celestial Sage and Outfit of the Celestial Avenger. I don’t remember who picked KT, but I do remember asking for a kiter. I told the group I’m not reliable as a kiter – that I’ve failed as many times as I’ve done it successfully. As we got ready to go, Chufta joined and I asked him to kite. Osi was on dragon, which I think he finds easy by now, I think I asked Azzellea to tank Nyt. I told the group to prioritize trash over dragon, and this worked out well this time. I think it was during the first rift or between rift 1 and 2 that we lost Hamster and Mellaina, and they didn’t manage to get back. The raid completed in 41 min 12 s. Loot: 24 threads of fate, 84 time runes, Clouded Dreams and 3 schisms. Most of Phoenix Clan raiders were on and I asked what we should run. I wanted to do thth, but Baba was suggested as a warmup so we did that. Osi was shambler tank, I placed him with Sokos (and Lubash left) and asked for one more to go left. Stumann volunteered. I ended up with the hut a lot and in the second baba fight I got knocked down from a distance and spent most of the fight knocked down by the hut. We didn’t get any wisps in the hut, so puzzle runs were quite easy. I kept quiet for most of the run and let people sort it out – since most know this well by now. The raid completed in 31 min 43 s. Loot: 125 hut runes, 24 threads of fate, Savior, the Breaker of Chains x2, Void, the Endless Cold, Echo of Ravenkind and Echo of the Icon. Finally it was time for this raid. We had 2 free spots that I lfm’d for. Leo and Lubash were on skulls and runners, Osi on red giants and runners. Calinee titan tank, Torimi and Tahlua puzzles. At the start things were a bit unorganized, I missed with sunburst twice and made a giant that we killed. Some party members were dying a lot and we had wariths spawn. I felt like round 2 and 3 went better until it seemed like things were out of control again. Then we completed. Completion time: 21 min 47 s. Loot: 64 forge runes, 25 threads of fate, The Everstorm, Maelstrom Courser and The Broken Blade of Constellation. 3. Killing Time LE – failure
Osi’s mentioned wanting to try elite for a while now, I’ve been hitting the breaks but felt we should at least try it. I let Osi assign roles and I tried to keep the run organised. In the drop downs I ended up in Tor room by myself, so I did the old perch way of doing this – was joined by others just as my bosses were going down. In the first fight before the first rift it seemed like we wouldn’t be able to do it – especially since our dragon tank died, but we somehow recovered and continued through the first rift and later the second. Carlinee was dragon tank, Lubash tank healer, Osiride shadow kiter, Tahlua Nyt tank and I party heals. I ended up drinking about 10 pots to keep healing Tahlua in the shadow room and still failed to keep him alive.

I already had faith in a completion when at the start of the last rift Lubash dropped and soon after C. I knew we wouldn’t be able to complete the 3rd rift without a dragon tank (Kor Kaza completes the ritual quite fast without someone keeping it paused), and you can’t d-door from the rifts. L and C managed to get back up with the use of jibber’s, but jibber’s means another death timer for the person who used it and it’s difficult to continue that way. It didn’t work out and soon after Kor Kaza completed the ritual. In the next try I believe we need to have one extra person with the tank, as the last (and first) platform is small and it’s hard to avoid getting hit by the dragon. Next time’s the charm. 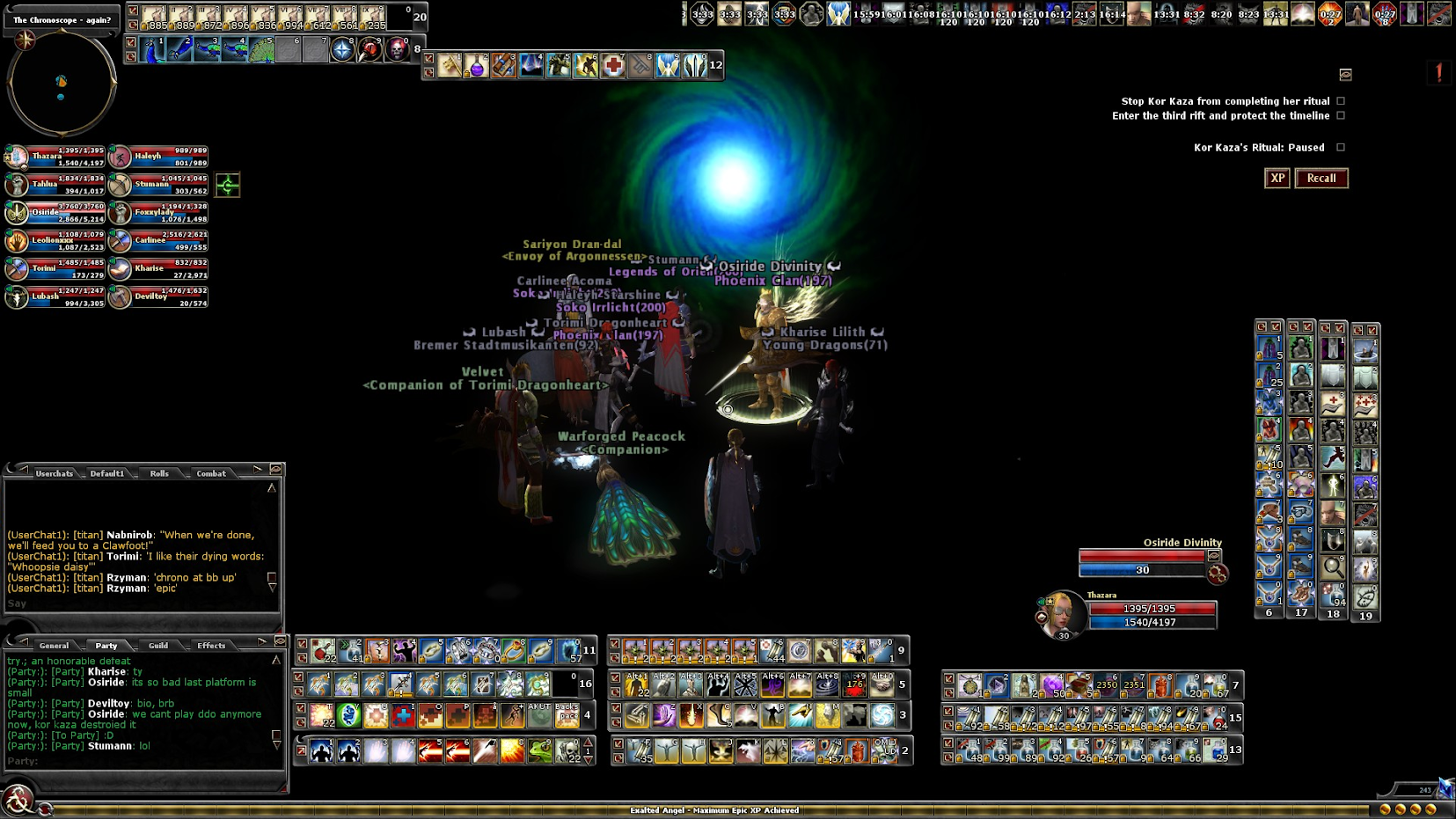 4. Riding the Storm Out LE

I was quite tired after the KT attempt, but would have done a hard run if the party wanted. RSO was suggested instead and Osi stepped in on elite. I felt we had enough divines, and switched to Cerge before the run. I had expected to die horribly, but either I’ve gotten better at it or my char more durable, because I managed to keep the deaths down to 3. Osi was dragon tank again, several people helped puzzle and kill skellies. We even had some people run ahead and complete puzzles solo, which we haven’t done elite before. In the end fight I got the question if we should kill the red named elemental or not and I replied “it depends on how annoying it is”. My logic was that of the ellie keeps blowing the melees around – kill it. If not, leave it as I’d rather people dps the dragon. Again in this run we saw Kor Kaza get a temporary debuff of -500k hp, which Sayri called “dismemberment” and said it was a colors proc. The raid completed in 33 min 21 s. Loot: 125 kor kaza runes, 25 threads of fate, Azure Guard, Arm of the Aggressor and a +7 upgrade int tome. 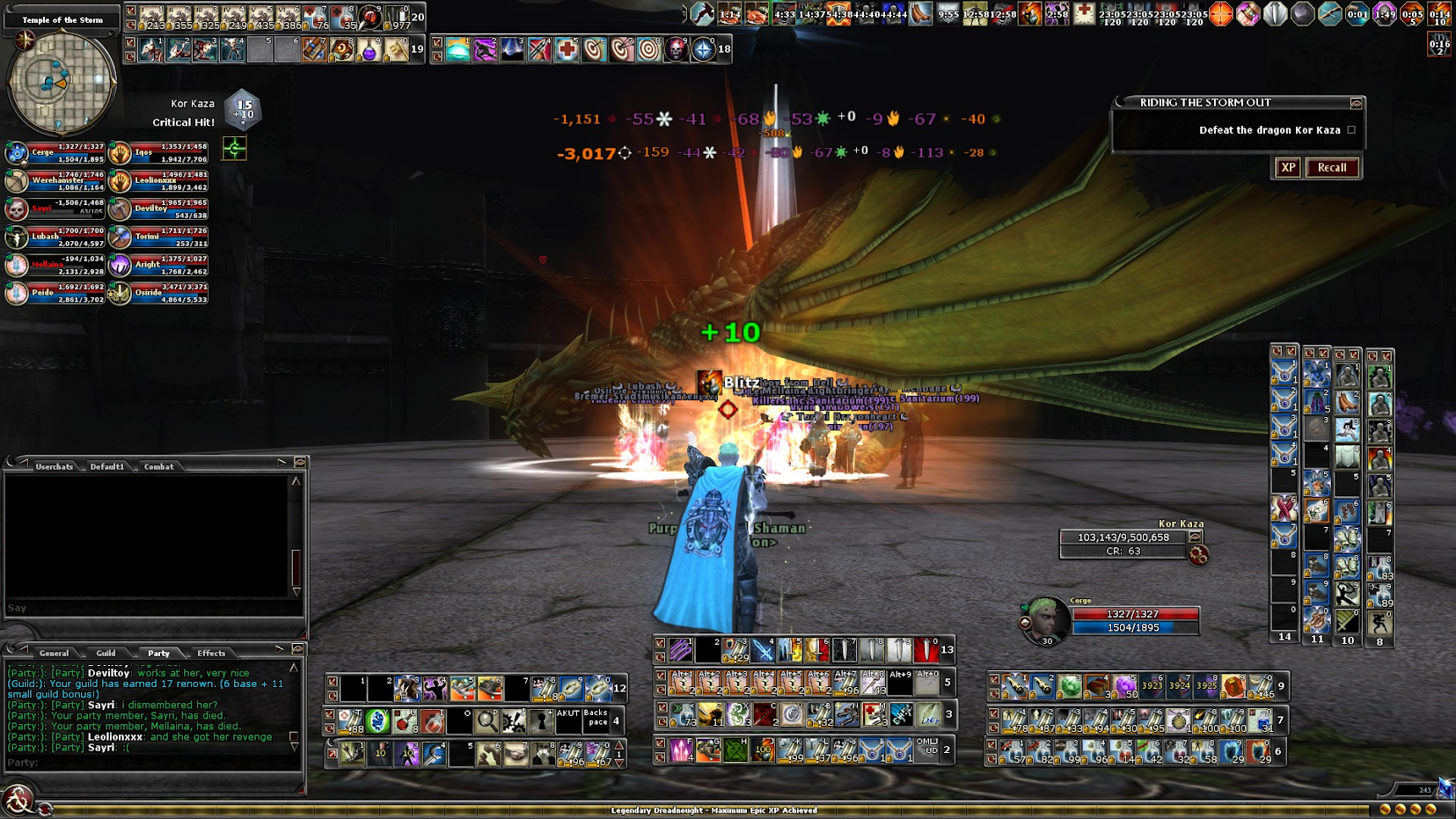 After RSO I was feeling quite tired, and the raids people wanted to do were longer than anything I had energy for so I called it, thanked the group and logged off.

That’s all for raids 130.
Thank you for stopping by.