Dragon tank: Osiride, Shadow kiter: Lubash, second tank (Nyt and LoB): Qif. We discussed doing elite, but with some new names in the party, I wanted to stick to hard. Some deaths, but over all a smooth run. Completion time: 31 min, 21 s. Loot: 84 time runes, 24 threads of fate, Tornado and at least 1 schims. 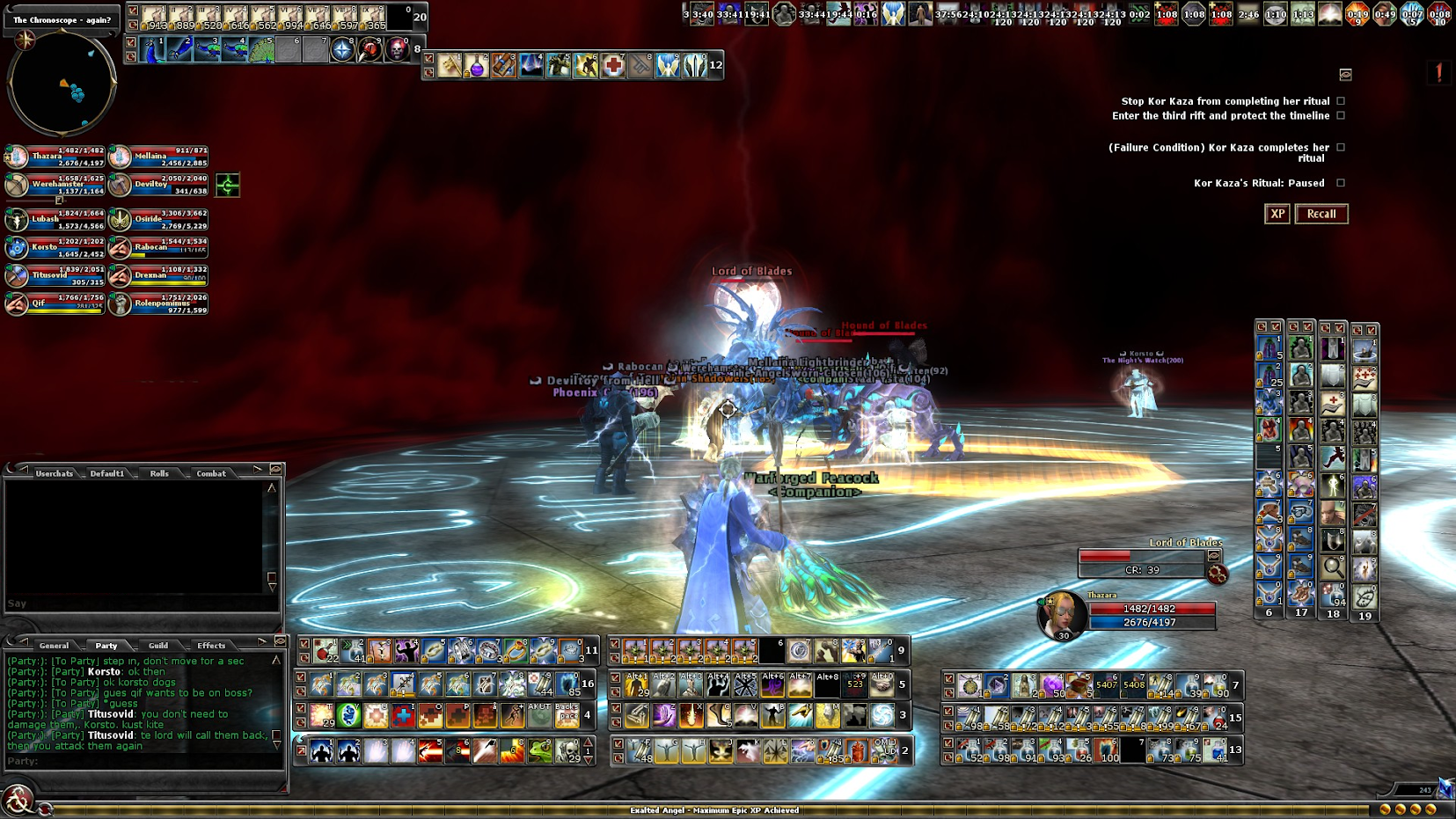 2. The Codex and the Shroud R1

Titus wanted to do Shroud, I said I’d do it if we do R1. We were unable to fill the party and decided to go short man after a bit of a wait. Things got a bit messy as we entered the second phase and someone decided to pull mobs south west, instead of killing them where they were. The mobs hit too hard to fight them all at the same time. We resolved it, though, and the rest of the raid was mostly smooth. Completion time: 51 min, 50 s (with about 5 min waiting inside). Loot: 97 + 148 + 132 codex runes, 3x 11 threads and random mats. Phoenix Clan recently got two new members; Leolionxxx and Torimi who were online when I logged and I invited them and then Tahlua who logged just after. I invited Sokos (and Lubash), Hamster and Pinnky, saved a spot for Osi and we had one free spot that was quickly snatched by Icenecrista. We were talking about doing elite, but I chose hard. Dragon tank: Osiride, shadow kiter: Lubash, Nyt tank: Tahlua, dog kiter: Pinnky. I died before the first rift, my stone was picked up by Titus and my soul kept bouncing between the start and the rift until timer was up and I got a raise. We had a lot spawn at the same time when the parasites spawned and several party members died. The rest of the raid was mostly uneventful. Completion time: 34 min, 30 s. Loot: Trinket of Freewill (that I won the roll on) and two schisms. I asked the group what we should do next and Osi suggsted RSO R1. I said sure and I didn’t get any objections. Osi was our tank again, I told the party to go south east and to try to time the puzzling between spams and to run across runes but not hog them. The run went surprisingly well with only 6 deaths total. Completion time: 38 min, 15 sec. Loot: 125 kor kaza runes, 25 threads of fate, Cobalt Guard, Guided Sight, Symphony x2 and Strap of Scale. 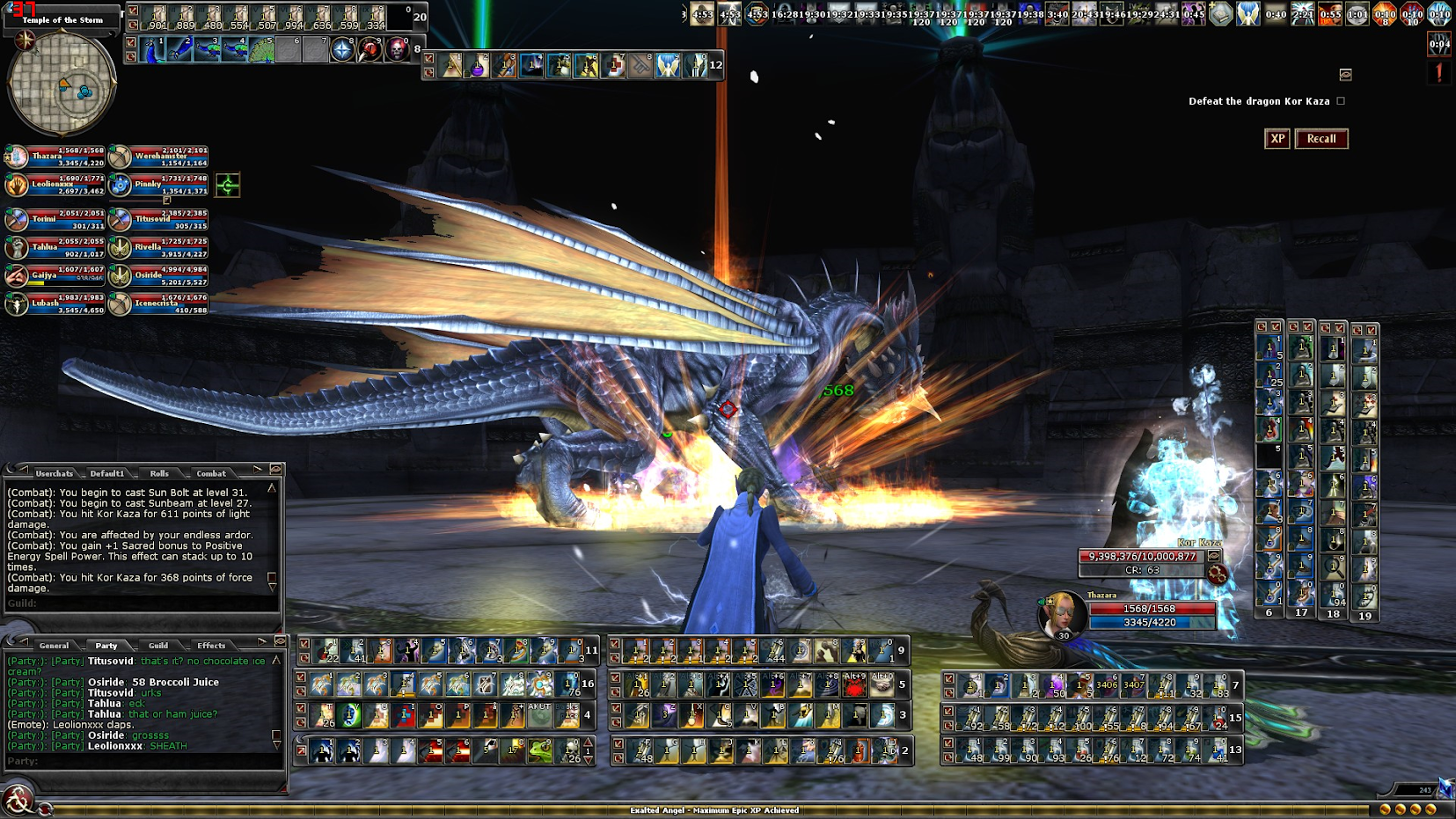 Rivella got replaced by Ries and we spent a good long while choosing roles. I wanted Osiride to take giants, as he’s tanky and self healing. Carlinee was titan tank, Lubash and Leolion skulls and runners, Doobrey was also on runners. Torimi and Titus did puzzles, Torimi and Pinnky disabled puzzles in the last phase. I was on tank and party heals, I raised and killed wraiths and runners that I spotted near me. I also cast spawn screen after raising. This was our first completion without Matrix members. Completion time: 20 min, 42 s (with some waiting inside). Loot: 64 forge runes, 25 threads of fate and Untold, Crack in the Sky. I was getting tired but was up for a raid or too more. Defiler was suggested, Osi picked R1. I didn’t feel like splitting the party so only told people to split up, to kill executioners before reinforcements and to call out where archons spawn. We had some deaths, but the run was mostly smooth and uneventful. Completion time: 20 min, 20 s. Loot: 125 defiler runes, 14 threads of fate, Visions of Precision (that dropped in my name and I decided to keep), Fellblade (longsword), Many-Hooked Greaves and Strange Tidings. MOD was suggested, but several party members said they weren’t flagged, so we switched to LTS. I decided that this would be my last raid for the night. We had one free spot that I posted for and it was filled quickly. We progressed fast and I followed towards ice room, but stopped to neg level a giant and the part completed before my giant was dead. I couldn’t see the rune, but somehow I had picked it up, which I found out when I clicked on the urn in the end fight. Completion time: 15 min, 56 s. Loot: 125 tempest runes, 19 threads of fate, Breastplate of the Celestial Avenger, Terminus and Docent of the Celestial Avenger. That’s all for raids 129.
Until next time.
Cheers.