This week people joined so fast for my LE Shroud that I had to take the lfm down within a few minutes to makes sure everyone who had intended to join from the channel would get a spot. At 9:10 pm we were ready to start. We stepped in and someone threw a globe of invulnerability to test the lag. Jumping in the globe causes a lot of posts in the combat log and will make you lag if the instance is laggy. It’s not a definite, even if you don’t lag in the globe the instance might be laggy. Anyway, jumping in the globe made me freeze mid air, so we decided to get another instance. Second instance seemed better, but the globe test still made us lag. We decided to go for it anyway. P1 seems to lag a lot, especially when we have warlocks and trees in the party. Lag seems less if we split up and don’t concentrate our dps on one portal. It was laggy, spells kept failing or being delayed, and our wizard was having problems with sp lost on failed spells. We did manage to get through, only to completely freeze as we were trying to get up the stairs to loot.

Part 2 went a bit better this time than usually, we had less deaths than normally, but a few because of lag (I think). Part 3 went really quick, I didn’t need to help with any of the puzzles, and I only had time to water one puzzle before they were all done. Part 4 was a bit laggy, but we managed to get through it in one round and part 5 was pretty standard. We finished in 60 minutes and I only had 3 deaths this time. 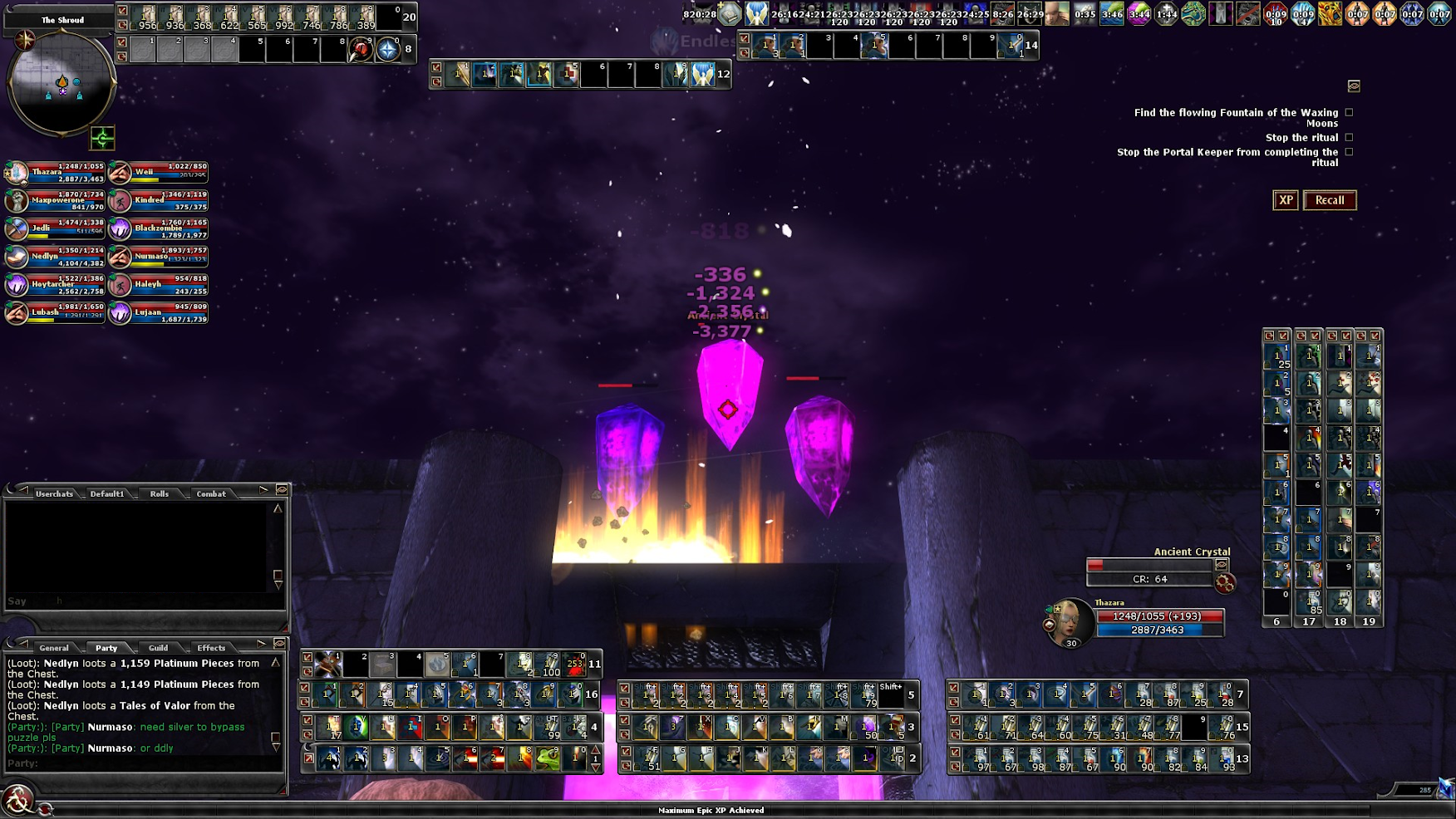 I suggested we do a Tempest’s Spine and HoX. TS first. Some people left and were replaced with other people, but it didn’t take long to have a full party. The run was quick with only a few deaths. We had a good group, so I figured we might have a chance at completing HOX. A few people wanted to switch characters, but if I recall we didn’t lose any people between TS and HOX, so I only posted for “For the ppl switching chars”. HOX ws rather exciting. Jedli is a pro at tanking momma, so I was never worried about that, but I did get a bit worried as it took a bit for the mindflayers to respawn after the charm ran out the first time. My tactics for doing this is to always keep 3 puppies charmed. You get 4 stones on the first run, but charming just one after the charm runs out will only cause problems. So I recommended we do 3 and 3. Nedlyn kept the puppies buffed and I kept 5 stacks of rebuke going, and we got momma down in two charmings. Urgan wanted to do a Fire on Thunderpeak run, so I asked for a spot for him in party and I switched to Cerge. I’m working on capping Cerge for TR, and I felt I’d prefer to run him in the non legendary raids. A spot opened up, and we gathered outside the raid. The raid itself was quick and easy. Someone wanted a Defiler run, so I was down for doing one. Urgan had to leave, but the person who left before wanted in. Defiler tends to lag a lot, and it did as well this run. Somehow my character manged to survive the fight at the gate. I did notice, though, that I didn’t have the right weapon for this raid, I kept seeing zeros. Luckily for me, the group itself had a lot of dps, and we only lost one archon. We had some deaths in the end fight, but I never felt like we were about to wipe. It was a good run. After Defiler I was feeling tired, and I wanted to finish my titan video before heading to bed, so I said thank you for the runs and logged off.

That’s all for the raids for this week.
Thank you for stopping by.
Cheers