Saturday January 12 I logged on at exactly 9 pm my time and invited Devil and Tahlua into the group before posting the lfm. Many of the Germans were on, and after they joined we only had a few spots left that also filled really quickly. I got a tell asking me to save a spot and a second after one of our regulars hit the lfm. I decided to take the lfm down while deciding who to let into the group. Normally I accept tells as reservations, but since the person who hit the lfm was someone I consider an extended guildie I hesitated about giving the other person the spot. The tell person had though not yet switched char (if that’s what they intended to do), so when they sent me another tell asking if they were too late, I decided to give the spot to the other person. Then it was time to pick difficulty (for babas). Since Titus was on her tank, and any higher difficulty is dependent on a dedicated tank, I wanted Titus to pick difficulty, then I decided on elite.

On Elite I want to have teams picked, so I looked at the group, then suggested Devil and the Germans go left, I and the rest right – which split the party 6 and 6. During the first baba fight I got run over by the hut, but didn’t get aggro, during the second the person who had aggro kept kiting the hut near us and I got run over several times. Puzzles went quite smoothly. My side had maybe 4 out of 6 who could do them, so we completed them quickly – except for the odd time when I or Penta failed to get all the lesser crows down at the same time. For the end fight I asked Lubash to heal Titus – since I saw him doing it the last time Titus tanked, and I told the party to move Baba as far away from the hut as possible. The end fight went really smoothly – after we had killed off wisps and red scarecrows. Titus got aggro of both shamblers and moved them away and the rest was just a beat down. We finished in 44 minutes, Fate, the Knower of All, Volley, Arbalest of the Damned and a +8 int tome dropped. Everyone also got 125 Hut runes and 24 Threads of Fate. 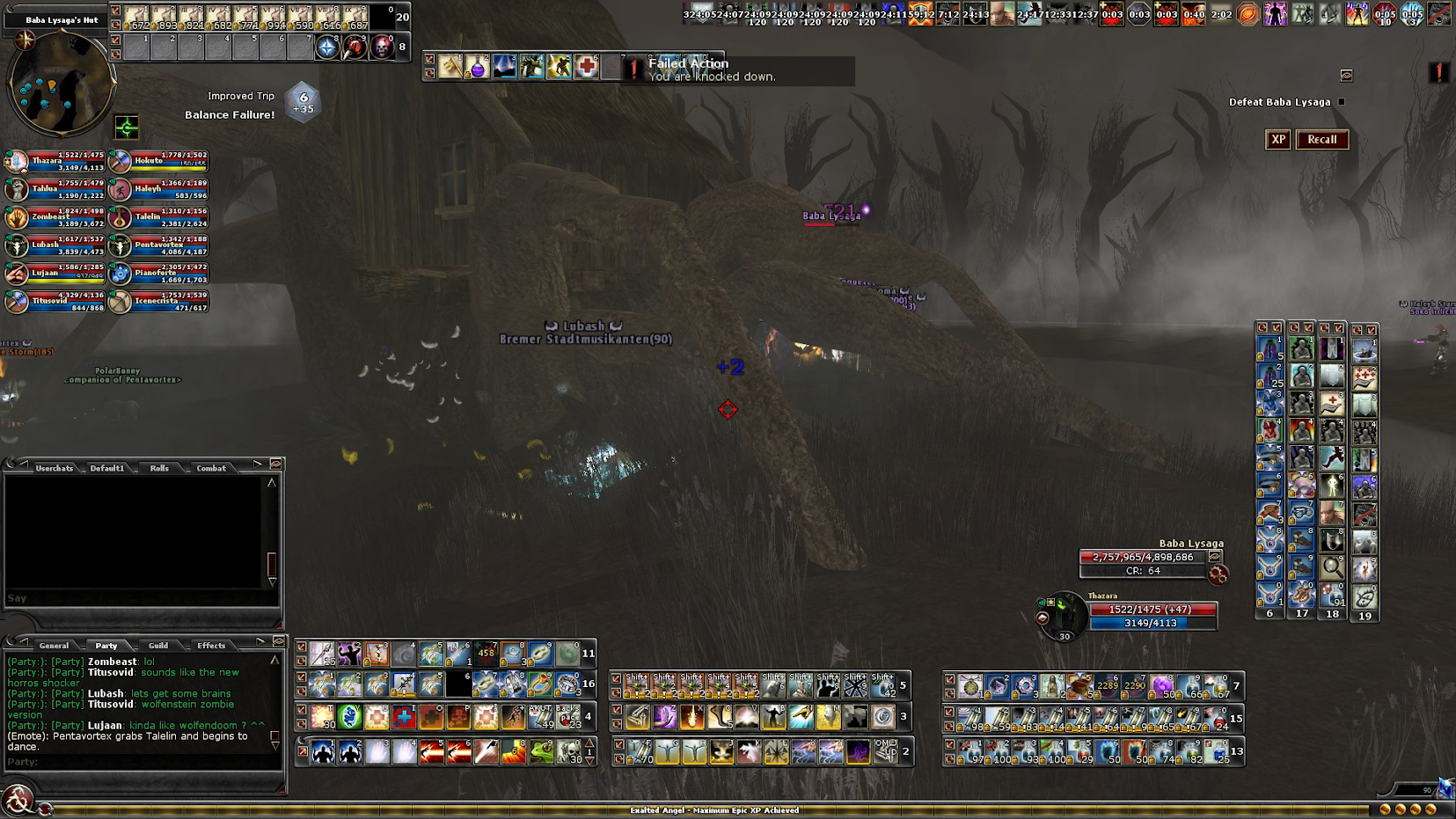 As we were running baba’s Intha and Melubb were asking about the raids in EEraids channel. I told them I’d let them know when we have free spots. After baba we lost exactly 2 people and instead of putting the lfm up I invited Intha and Melubb. I asked the party about diff and since I think Titus felt we could handle EE, I stepped in on elite. I read the card and grabbed a trinket, asked Intha to get the other and asked if Titus or Tahlua would do the sunsword. Tahlua got it. We waited for everyone to get in the proceeded into the main room. The first fight was a bit slow, while the lesser shadows (oranged named) were taken care of quickly. I ran to activate “Find Strahd“, then joined the group by the d-door to the stairs. With two trappers the stairs part went quite well. We did though at one point have trappers die and had to wait a bit. When we got to the part where the red shadows spawn we actually progressed in a planned way this time, everyone waited and left Titus go in and grab aggro before anyone else approached the area. This meant less deaths and less running around screaming Help! (I tend to die/ get hurt if they aggro on me). The heart fight was quick and easy with few if any deaths (I don’t remember exactly). 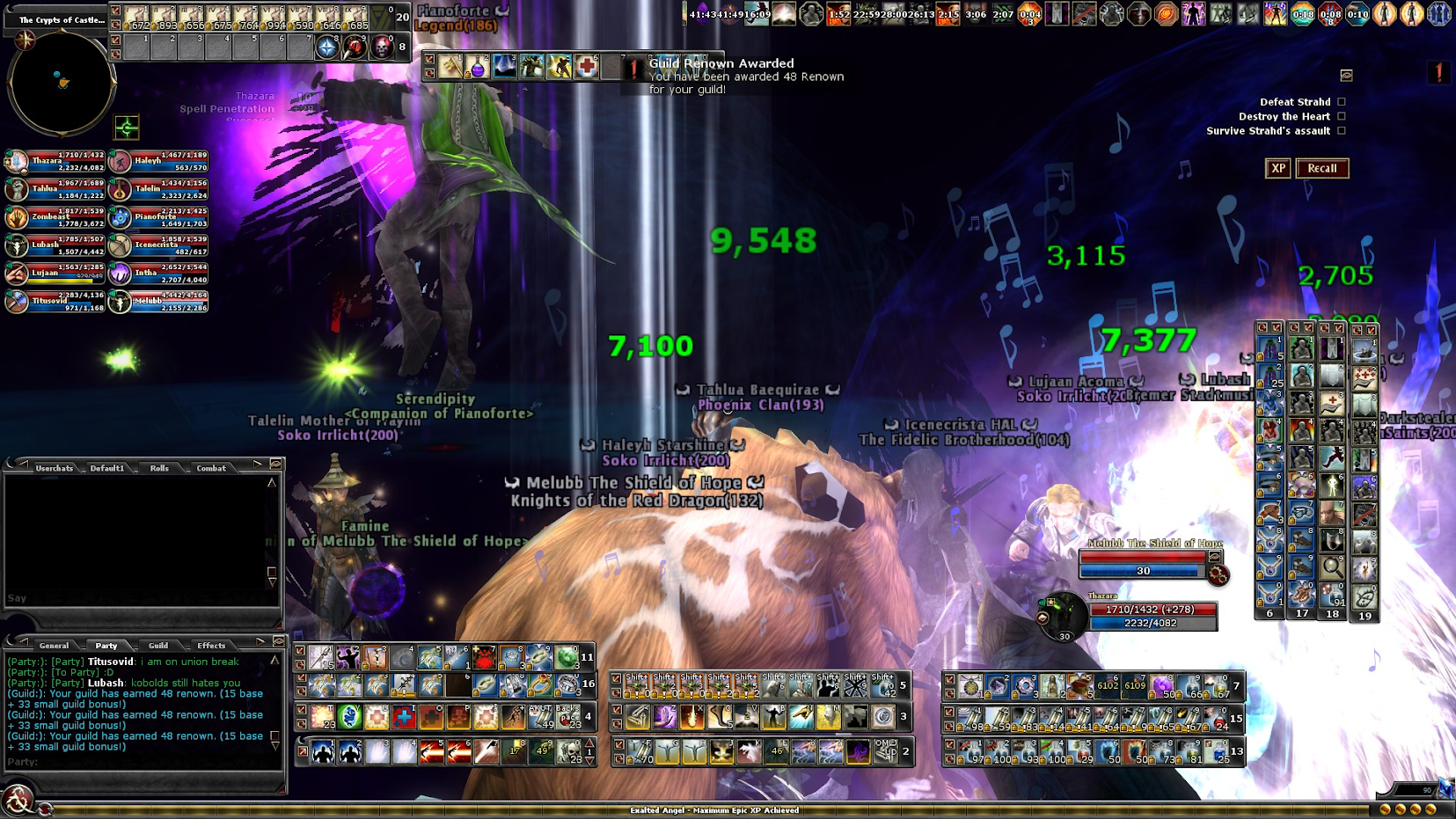 We d-doored, shrined and spread out by the doors. I again didn’t find a card in my doors so ran around a bit before deciding to hide in a crypt. Titus grabbed aggro of some of the trash and parked it. We didn’t succeed to light the torches in the first try but the second try was successful. We gathered outside the crypt and prepped to enter. As we did so someone got gripped and I grabbed their stone and told the party to head in. I asked Melubb to get brides, but at some point he went down and Titus ended up with both strahd and brides again. As we’ve got Strahd at tiny sliver one of the brides die and I call stop. A moment later Strahd goes down and the bride gets back up. I know there is no chance for us to get a full hp bride down before strahd gets back up. We start over and this time we manage to prep – but not kill brides, while we prepped strahd. On the second try we complete. The raid completed in 49 minutes and I got two named items: Sentient Jewel of the Covetous and Flow, the Piercer of Hearts. Platemail of Strahd and Fleetfoot Necklace also dropped. Everyone got 125 Strahd runes and 25 Threads of fate. 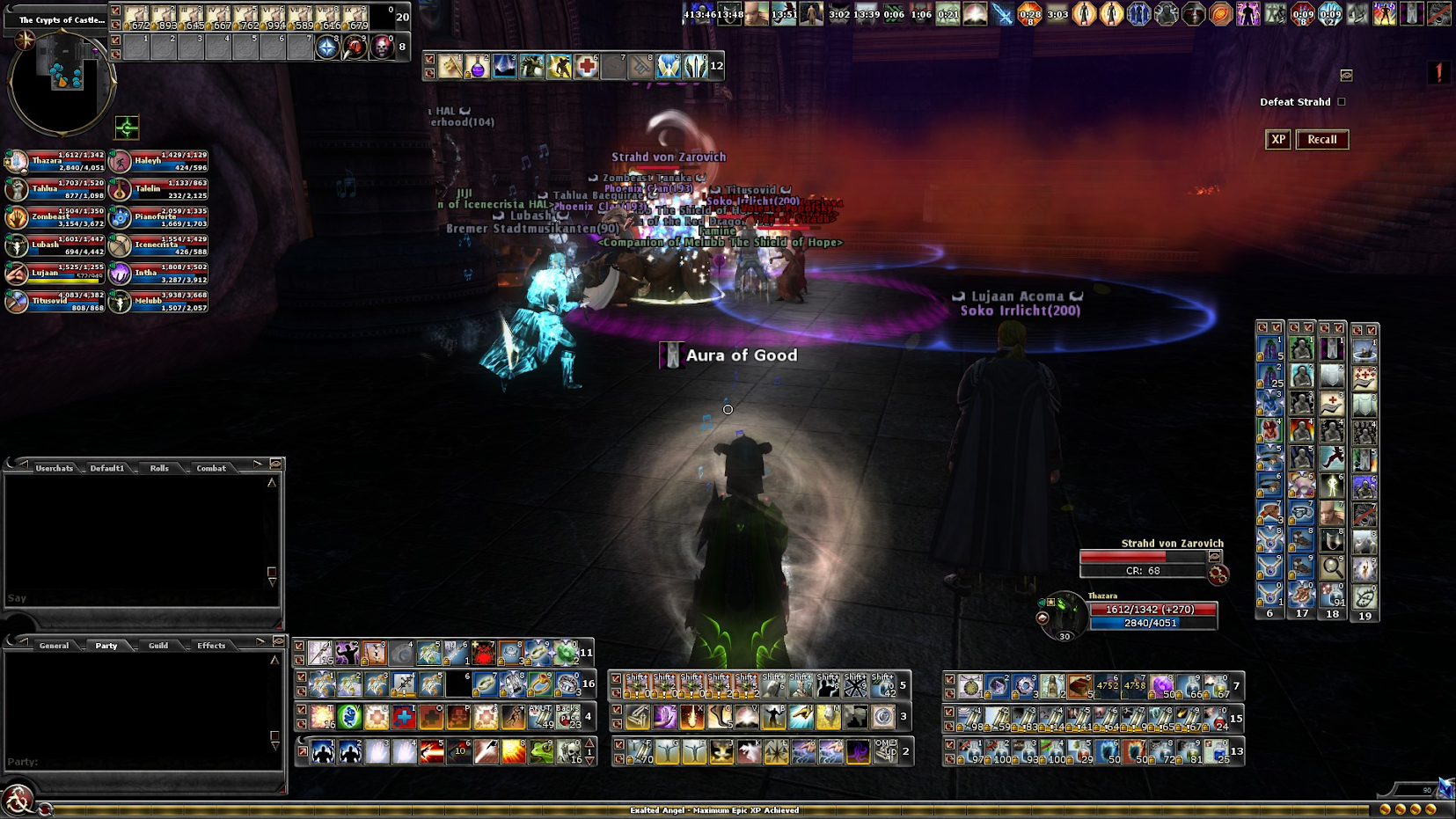 Since Lujaan didn’t want to stay late, he asked if we could run Defiler after strahd, and I agreed. Since it lagged a lot on elite last time I figured a quick hard run would suffice. I posted for the available spots and as we filled I figured we’d have no issues at all and didn’t bother to do teams. People called out where the archons dropped, we killed pretty much everything, executioners, reinforcements, trash, the snake and then the boss. The raid finished without any issues in 18 minutes and someone commented again on how unexciting the end fight is. Boots of Blessed Travels and Belt of Braided Beards dropped and everyone got 84 Defiler runes and 12 Threads of fate. Then it was time for KT. Some people switched chars and we had one spot available that filled quickly. Looking at the party I thought we might be able to succeed on hard, some weren’t even hesitant. Titus didn’t want to tank and instead switched characters, Stitchz said he could tank without heals so we let him do that. The rest of the party did drop downs and rifts. The first dragon fight was a bit of a challenge and we almost wiped to trash. The rest of the fights went well after more party members decided to help with trash. The first rift was easy as it usually is, in the second we had 2 shadow kiters and when one of them died due to lag, the other could pick up the slack. The second rift completed without much issues. The third rift had some deaths but was over all good. Haleyh was kiting the dogs and seemed to do it flawlessly. We had some people get killed by LoB, but other than that the fight didn’t feel that difficult. The raid completed in 44 minutes and Elyd Charm dropped times two and The Staff of Shadow as well. Intha got a schism and everyone got 84 Time runes and 24 Threads of fate. After KT I wanted to do RSO. Since we had a good group with Titus switching back to tank, I felt we had a good chance at completing an elite run. Titus didn’t feel up for it though, so after a bit of  contemplating back and forth from me – should I push for my wish and risk things going to shit, or should I keep everyone happy and do a hard run? – I decided to keep the party happy and we did a hard run. We had a strong group with people who knew the raid, knew how to puzzle and where to go and we all worked to progress the raid without having to guide newer people. I didn’t die this run so I can’t say how many deaths we had in the end, but there weren’t too many. We completed in 32 minutes, Strap of Scale and Guided Sight dropped and everyone got 84 Kor Kaza runes and 21 threads of fate. 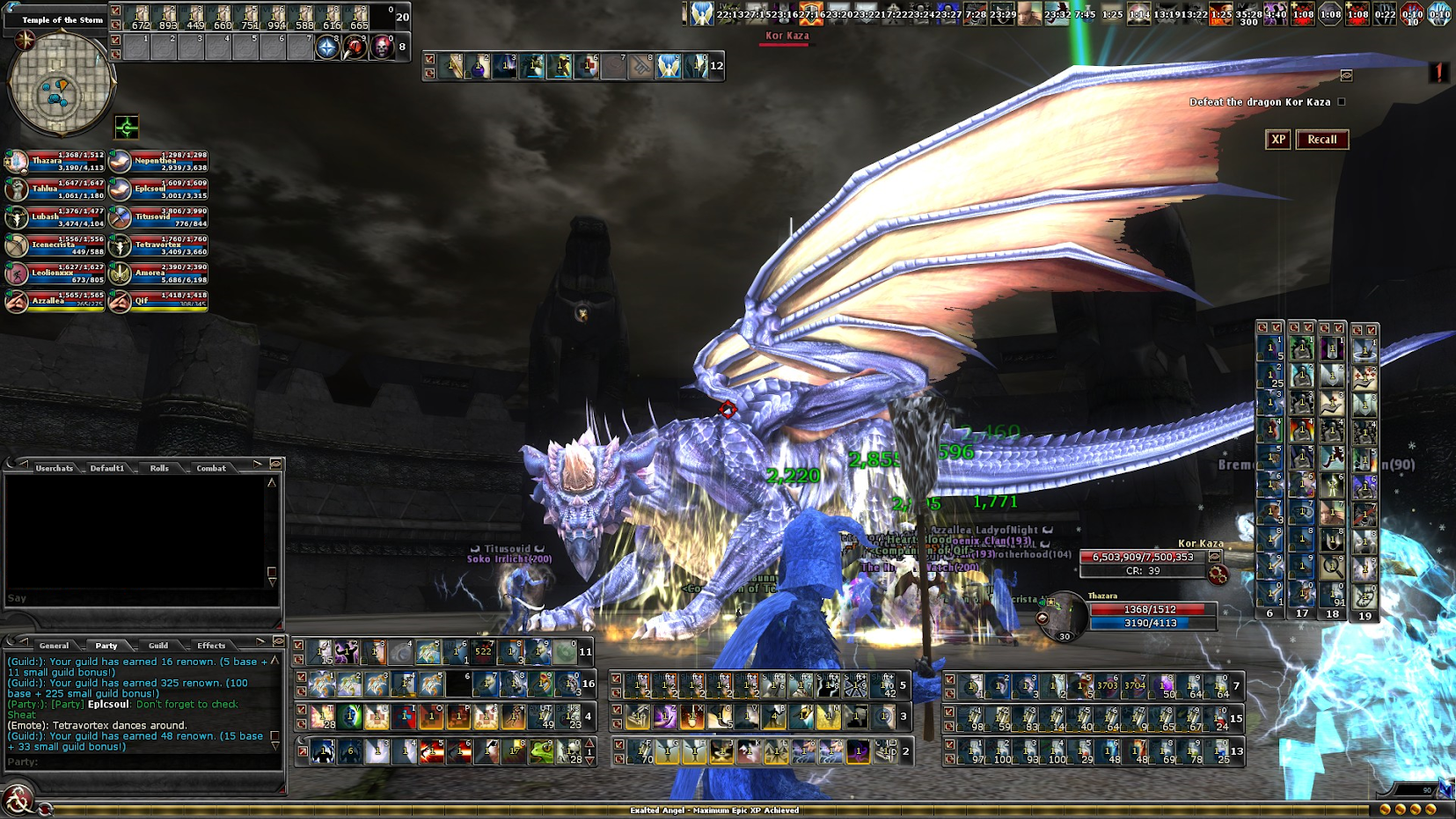 I was getting a bit tired so I didn’t want to do any long raids anymore, but since some party members were interested in doing more I figured I could do something quick. I think it was Devil who suggested MoD and I staid yes to a mod. Mod is quick and easy on hard and it drops both runes and threads since U41. We waited a bit for some more joiners and I even let Ero bring 2 chars. After I got tired of waiting I stepped in, waited for everyone to enter, then started the raid. We had a couple of people per side and one or two deaths from people attempting to go to a side but didn’t make it. The raid progressed quickly as expected and the doomshperes spawned and then death knights. The raid completed in 10 minutes and on completion I died – probably because I still had the cloud effect on me even though it should have disappeared on completion. The raid dropped 84 Death Runes, 11 Threads of fate and Circle of Malevolence also dropped. 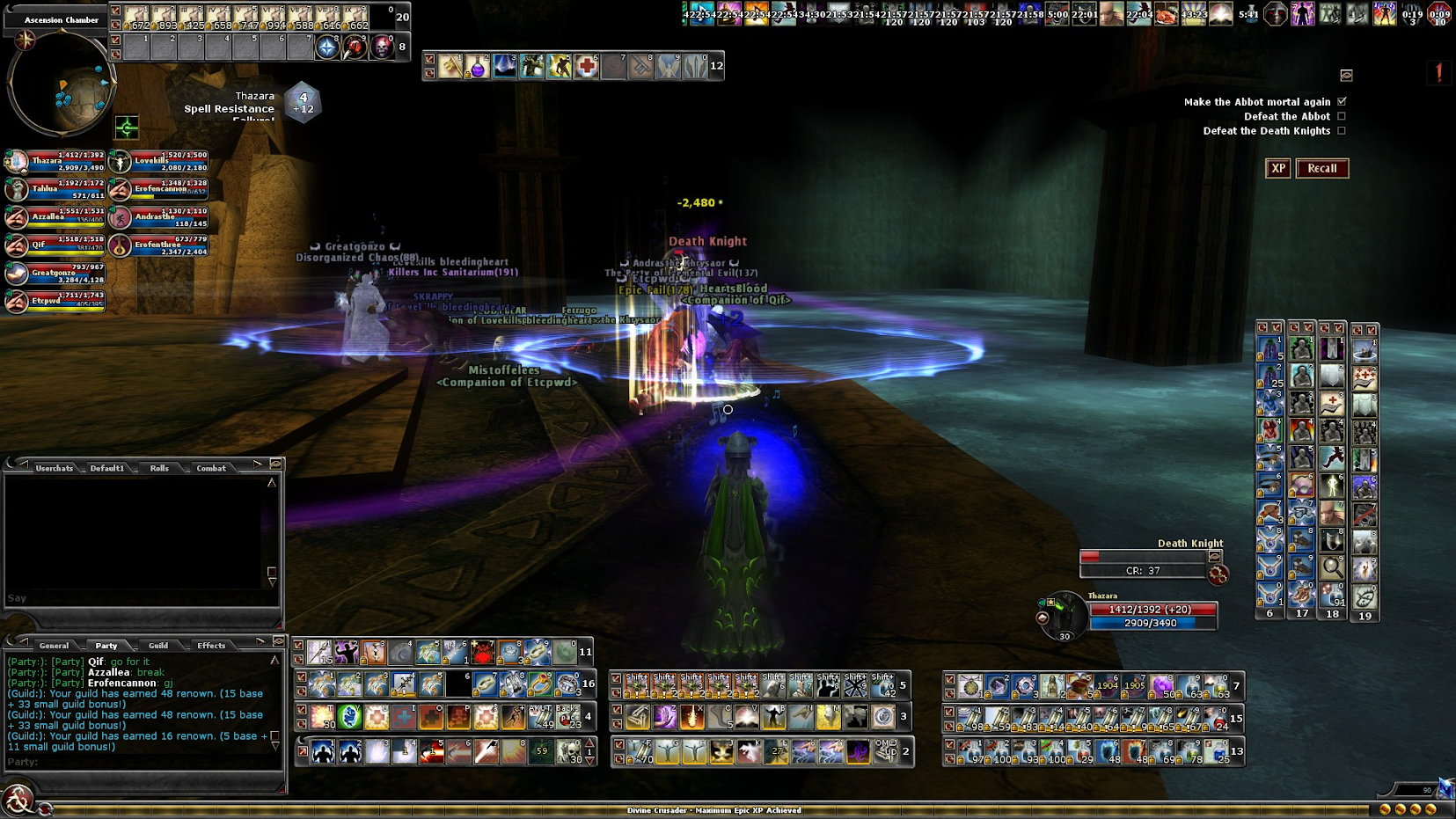 After MoD I was done for the night.
That’s all for raids 106.
Thank you for stopping by.