Jarvanna has been neglecting Xenaya for about 2 weeks so the first thing she did this Saturday was help Xen get to lvl 8. I wanted to teach Xen what window farming is all about so we did a few runs of Caged Trolls hard. After I wanted to do a quick run of Depts elite for the last bit of XP, because I like Depts. 🙂 Well, we managed to wipe in the second quest and turns out Xen only needed a tiny bit more for lvl 8, so I said let’s just do slayer for the last bit. Xen and Jarvanna took their lvl and headed over to The Tear of Dhakaan elite with the druid Manhas and the rogue Lawion. Half way through they were also joined by the lvl 1 rogue/ lvl 6 fighter Sneakybot. Heals were mostly the hireling Flower. Everything’s well until we get to the open area with the closed door and the optional clay golem. Jarvanna and Lawion head for the optional, the rest for the door, and then everything goes sideways. The people by the door go down, Jarvanna tries to go help and goes down. Same story for Lawion and it’s a wipe. I was out of time, so said, ty, but I have to go lfm for my weekly shroud now. 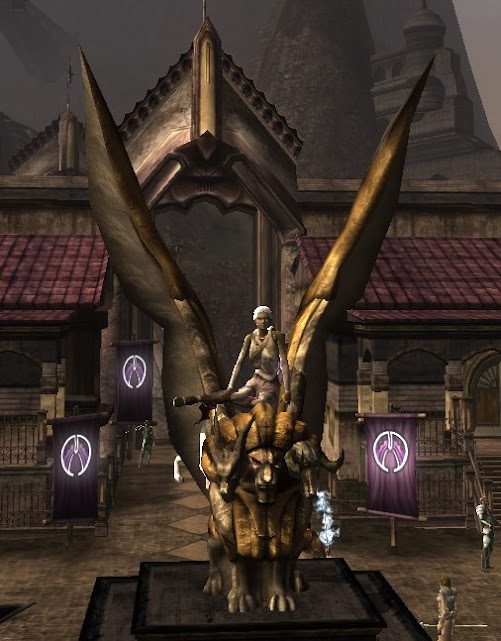 Jarvanna in house K. Yes, I saw a similar photo on krissonofpark‘s blog, and wanted my own. 🙂

Weekly elite shroud
I put up the lfm at more or less exactly 5pm EST. It’s interesting, every week’s different. Sometimes we fill very quickly, other times I end up waiting a long time. The first to join is a sorcerer, then I get a fighter (I think) and a ranger. One friend is doing a ToD (we end up waiting so long that he join in the last spot), so can’t join, the other is on timer. I don’t get an arti this run either, but 3 casters, an fvs, a second cleric, a rogue and then some melees (this time I actually forgot what classes I had). Things are pretty smooth in phase 1 and 2, someone dies in phase 1, but that’s what happens when u lag while jumping over the spikes (I never jump over them). Spikes hurt a lot on elite. Phase 3 is also smooth, in phase 4 I get a bit annoyed with the cleric. He was trying to take the lead, wanted to do heal turns. Ok, I’ll try it this once. I have run raids doing heal turns, but most of the time we don’t. See, I’m not a healbot. I heal and DoT. I also lag. Which means, if we are going to do heal turns, I will have to healbot and hope for no lag. 2 people die in phase 4 and I drink 1 pot. Well, at least I tried heal turns and know that it’s much smoother when we’re 3 healers healing, than one healing until out of mana, then someone else takes over. This might have been the way to do it in the old epic raids, but in elite shroud, and especially when it’s my run, I do not want to do it that way.

Since I have a cleric in the party with more mana than me, I let him do all the mass buffs and someone else do fire resist and freedom of movement. As always I make sure everyone has gotten the important buffs and that everyone’s gotten their mana back before we take down the ellie. Harry arrives and the melees start beating on him. Melees do a good job at keeping Harry put and I keep DoT’ing. I do drink maybe 3 pots to keep at it, and we have 2-3 deaths, but everyone’s standing when Harry goes down. 🙂 Oh, and for the first time someone actually does not finish. Who leaves an elite shroud anyway?

Afterwards the cleric asks me if I do this run weekly, and tells me he’s got 4 toons available for the run, that I could have one of them for my weekly Shroud. 🙂 It was rather strange, in my opinion, until I later on found out who the person was. Same person who ran with Thazara in her very first epics around last Crystal Cove, and who asked me to join Definitely’s weekly eVON. 🙂

Weekly eVON
Well seems like Thazara has added at least one raid to her weekly raid list. My raid plan for Saturday was Shroud, eVON and ADQ (did ToD on Friday). Cleazy (who invited me to join the guild Disorderly Conduct) wanted to join my Shroud, but he got distracted and didn’t hit the lfm before we filled. My bad that I didn’t invite him before that, but there was some miscommunication, and I got a bit annoyed with the fact that he told me while I was waiting to fill “I’ll join and then a lot of my friends will most likely join”. So I kind of didn’t want him to join just because of that comment. 🙂 I found it a bit condescending, like I couldn’t fill my own raid? 🙂 But after Shroud I joined his eVON in the last spot as the second healer. 🙂 Cleazy has gotten a bit obsessed with running eVON, since he badly wants the eSOS shard (I think it was shard and not seal, might be wrong though). He’s running eVON on several toons, probably every day. So, eVON with Cleazy is smooth. I guess I’ll be running it with him at least once a week from now on. I had planned to do Definitely’s weekly eVON, but he usually puts up the lfm at 3am my time, which feels like a bit too late.

Later on Tristian the paladin (who turns out was the cleric in my Shroud), asks me if I want to join Definitely’s eVON, that they have a spot open for a healer. 🙂 I reply, “sorry, but seems like I’m a Cleazy follower now, just ran it with him a moment ago”. 🙂 Definitely has joined my Shroud before, and I don’t know his toons, lol! So might be that he was there too this week. Tristian and Definitely use the Dark Prophecy channel and I think I could get some shroud recruits from there as well. 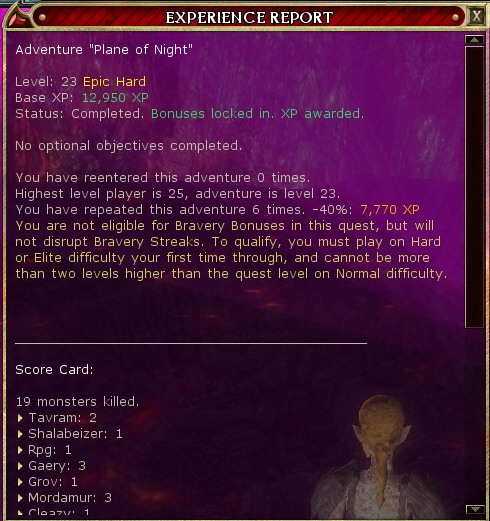 Interesting thing about eVON. It says “You have repeated this adventure 6 times, -40%”. Well, this is the 3rd time in a row at least that it has said that. 🙂 This was I think Thazara’s 9th VON.

ADQ1-2
🙂 After eVON Cleazy wants to do eADQ. I have to ask him, did u know I wanted to do ADQ, or did u come up with it on ur own? (I wrote on Twitter that I was gonna do ADQ this Sat). 🙂 And he replies “Don’t u worry about that”. 😀 Meh! Such a tease. There seems to be a lot of ADQ’s on the lfm and we have a difficult time getting anyone. We end up running both on eNorm, me (Thazara lvl 22 cleric), Cleazy (fvs lvl 25), Cleazy’s friend on her paladin and a guildie of mine on a barb. I mess up a few times, and die and in ADQ when the Marilth targets me I call her an “evil bitch”. 🙂 The paladin replies something like “yes, she’s moody isn’t she?” (Of course I go down when I get aggro, since I’m currently leveling Exalted Angel. In Unyielding Sentinel Thaz would have done better). We take her out and hope for good loot, but most of it is junk. No Torc. At least I get an epic raid token.

Eveningstar
Alone at last. 🙂 Pally and barb leave and it’s just me and Cleazy. It’s sort of late, but I haven’t seen C all week, so I’d like to run some more. (omg! Does Thaz have a new crush?). He gives me the star, but I don’t want it, so give it back. I check Thazara’s quest panel and the only heroic quests she hasn’t run are Murder by Night, The Riddle and Raiding the Giants’ Vault (solo). Cleazy do the lfm and we head over to do Murder by Night and after we do the Riddle. With that Thazara has enough purple dragon knights favor to get Key to the City – Eveningstar. As a last quest before I have to go to bed we do Don’t Drink the Water on epic hard. This was also a pretty good run, even though our cc guy wasn’t always responding to requests (haste, disco, open lock). 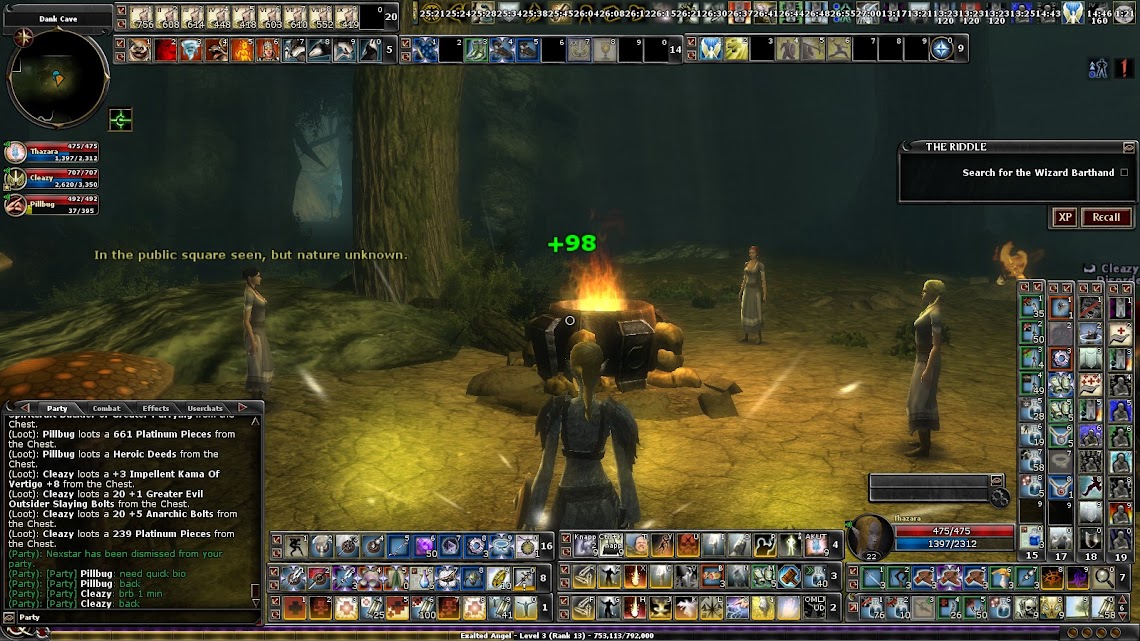 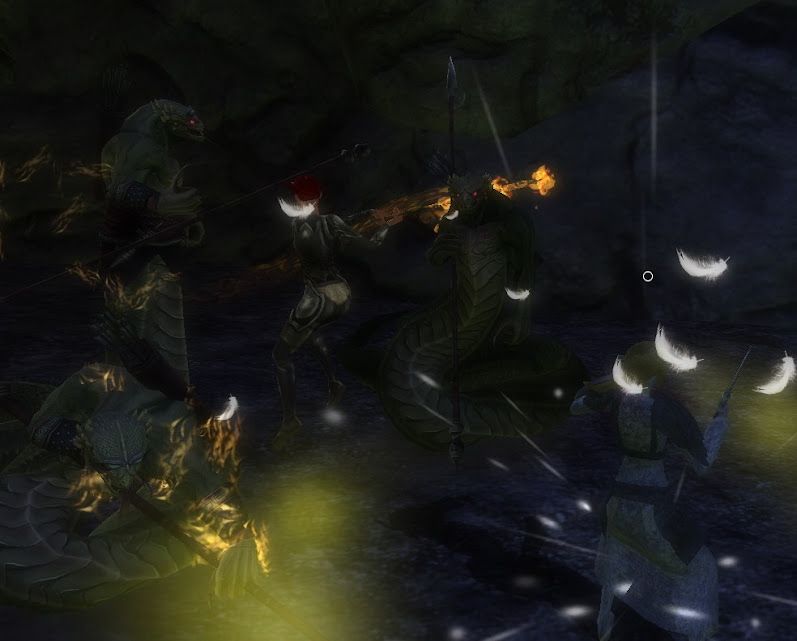 In don’t drink the water we met some interesting creatures called Yuan-ti. 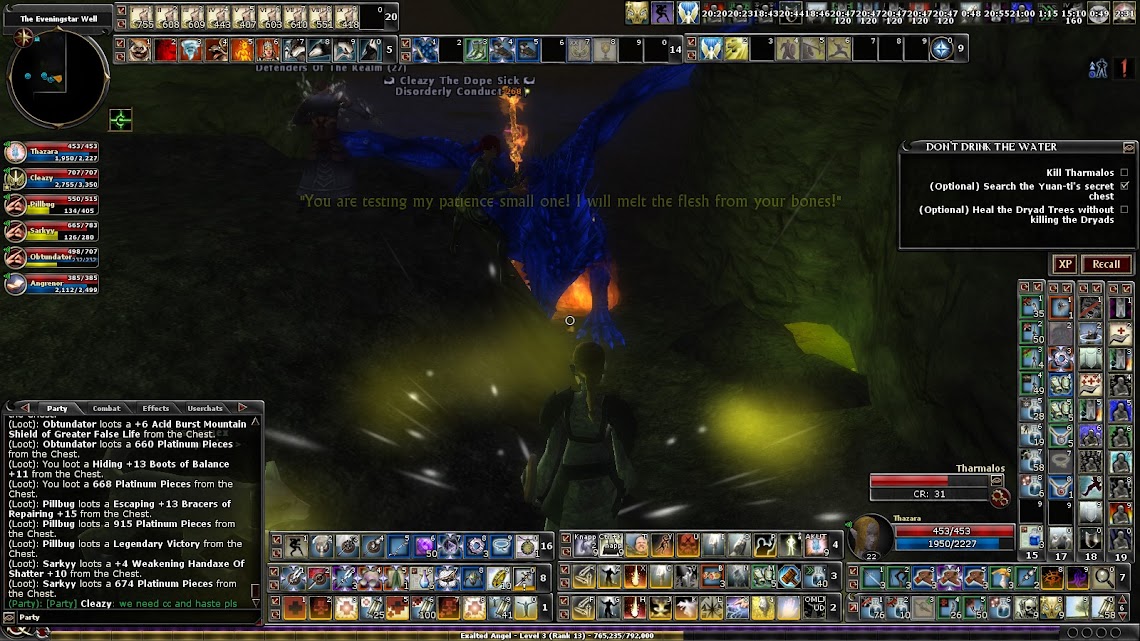 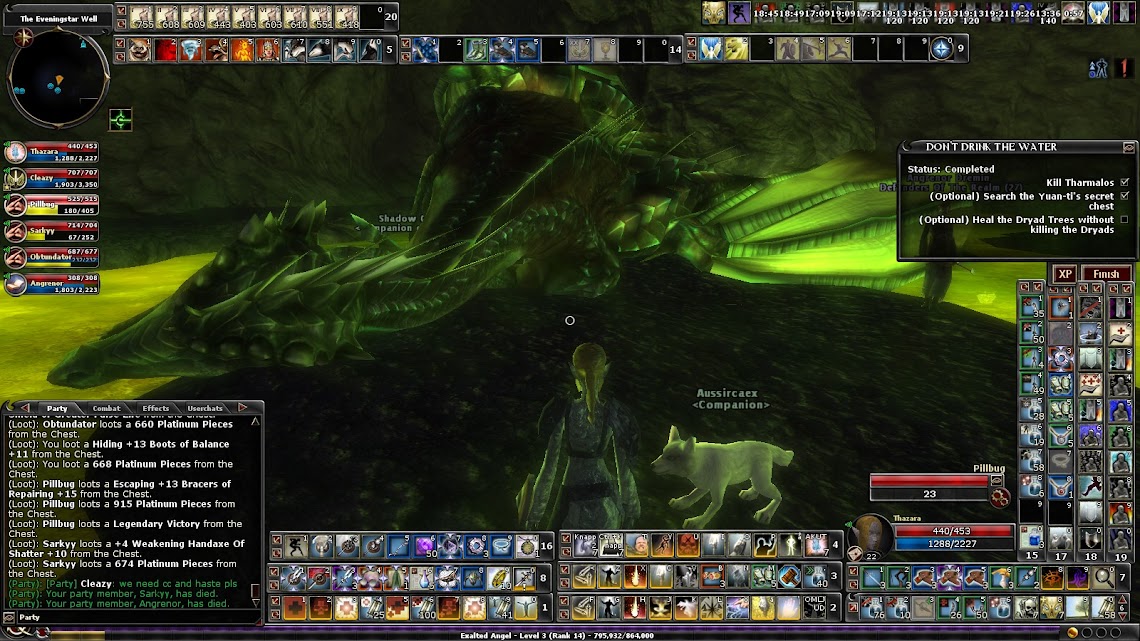 After this it was time for Thazara and Micki to turn in for the night.

Ty all for reading and see you on Orien or Cannith.
Happy questing/ raiding.

tl;dr Just look at the pics. 😉

P.S. Thazara just exceeded 4100 favor. Woop woop. Cleazy was bragging a bit about everything he has and has done (well yes, you were!), 🙂 but at least I beat him on favor. 😀