This year also I went to Croatia for two weeks… but this time I wasn’t travelling there to see Darth, but we flew there together to visit his family and friends. Darth’s dad has a photo studio and he wanted to take some pictures of us. This one I feel is the best one of the both of us.

END_OF_DOCUMENT_TOKEN_TO_BE_REPLACED

Yesterday I did a little social test. I didn’t want to say the purpose or the expectations in advance, but wanted to see what reactions I would get. As it was pointed out to me, most (?) of the readers come here for information about ddo and aren’t too interested in the social bit, so I do not plan on continuing this thread after this. But I wanted to talk about what I learned from my little experiment.

The reason for the experiment was that I felt like I was once again seeing prejudge when making some comments. People were reacting much stronger than I felt they should have, and I got accused of trolling and attacking someone. I didn’t feel like I was doing any of that, I might have been a bit rude, but I didn’t consort to name calling, and none of the things I said were intended to agitate the reader or poster. To me, a troll is someone who only makes comments with the intent of causing a negative reaction. I don’t feel like I do that. To be honest, I’d rather you call me a jerk and an asshole than a troll. Because a jerk to me is someone who says mean or thoughtless things, a troll is someone with a mission. But enough about that, back to the experiment.

I feel like there is a group of people that have been saying untrue things about me behind my back, creating prejudge among the community. I am sensitive, thoughtless and a bit of a jerk at times, but what I really don’t like is when people gossip behind my back to create prejudge. The blog post yesterday was an attempt to stop the gossiping, to try and clear the air, to create a clean slate.

The result? The initial reaction felt pretty good. The people who commented seemed to be hearing me, they were supporting and offered some much appreciated advice. But then as I was clicking around twitter I stumbled upon a conversation where my blog was mentioned. I was accused of bad behavior, being obsessed, the blog was called tacky and victimizing. I guess that’ll teach me.

I can’t stop the gossiping. I can’t force anyone to talk to me if they don’t want to. But no matter what you think of me, your words still hurt.

Ok, Social experience over. Back to ddo.

P.S. To the people who are there for me and support me when I need a shoulder to cry on, you don’t even know how much you mean to me.

P.P.S. To the people who gossip and create bad air, I can’t stop you from doing it, but I can do my best to ignore your words.

I got my monitors and it still feels a bit weird, and they’re a bit higher up than my old one, which may turn out to be a problem. But so far I’m quite excited about them. Have a look at the pictures: 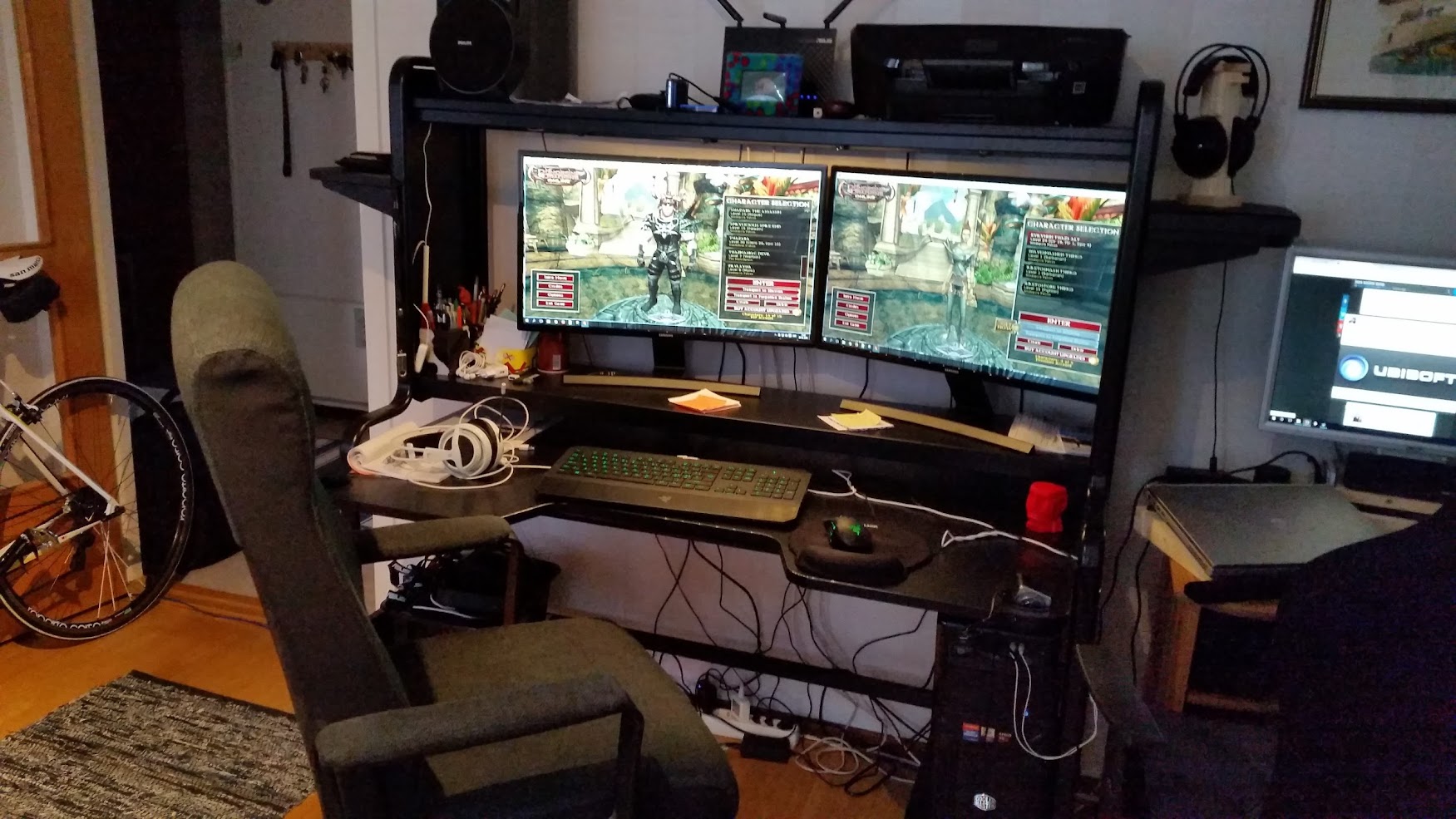 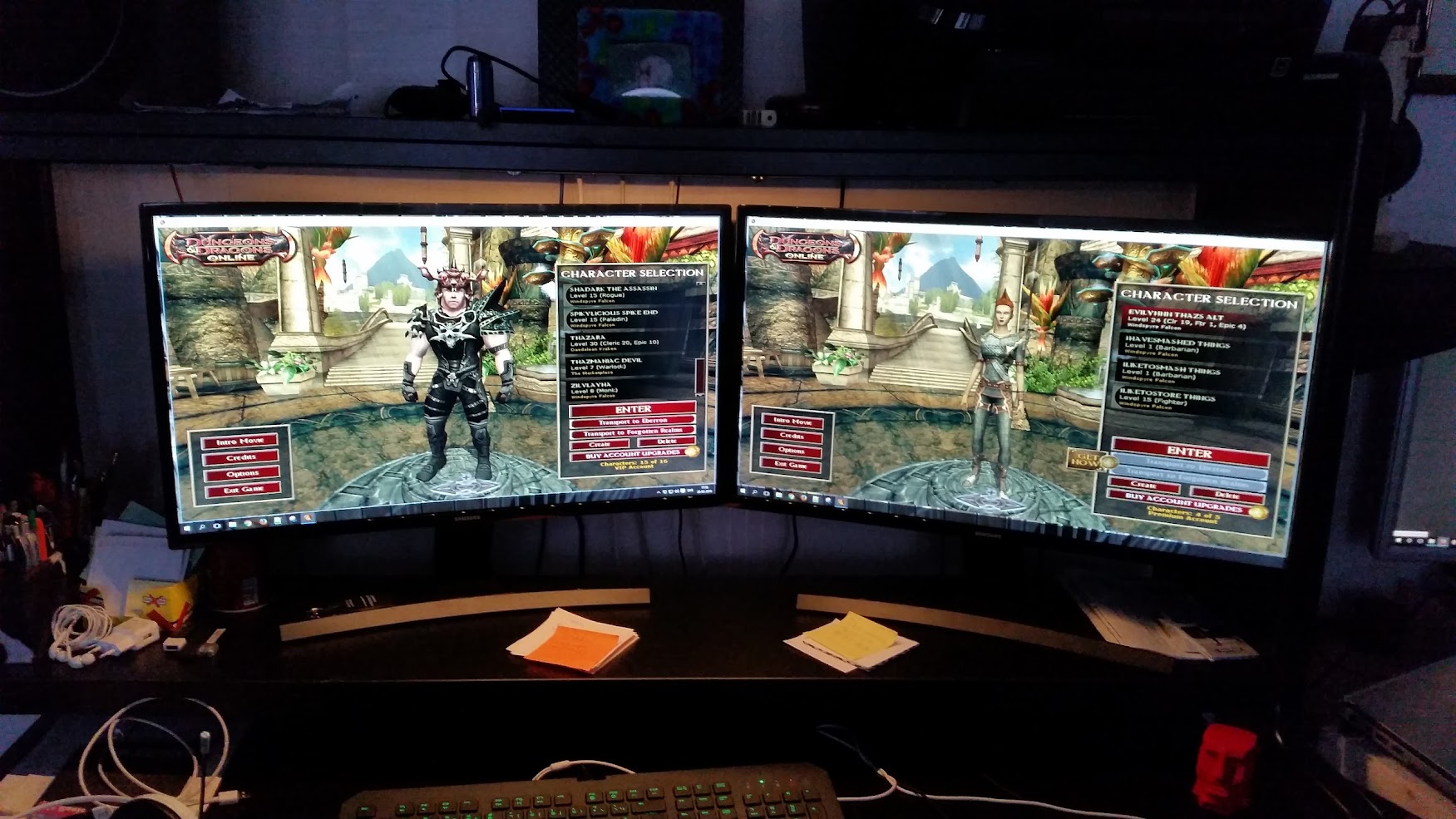 Miri, that is Miriath, left my guild Phoenix Clan today. Miri has been in Phoenix (previously Gli Egypt) for about a year and a half and he was the first person I asked Osi to invite since I joined. My reason? I said I needed someone to TR with. I didn’t really run with Miri much, I play very mixed.. some days I run a TR, some days eTR, other days raids, so I find it hard to TR together with others. It really only works if they are playing multiple toons too, so they can leave one for me. Miri has more than one toon, but he really only plays one, so we ran some epics together and some raids, but very little heroics. 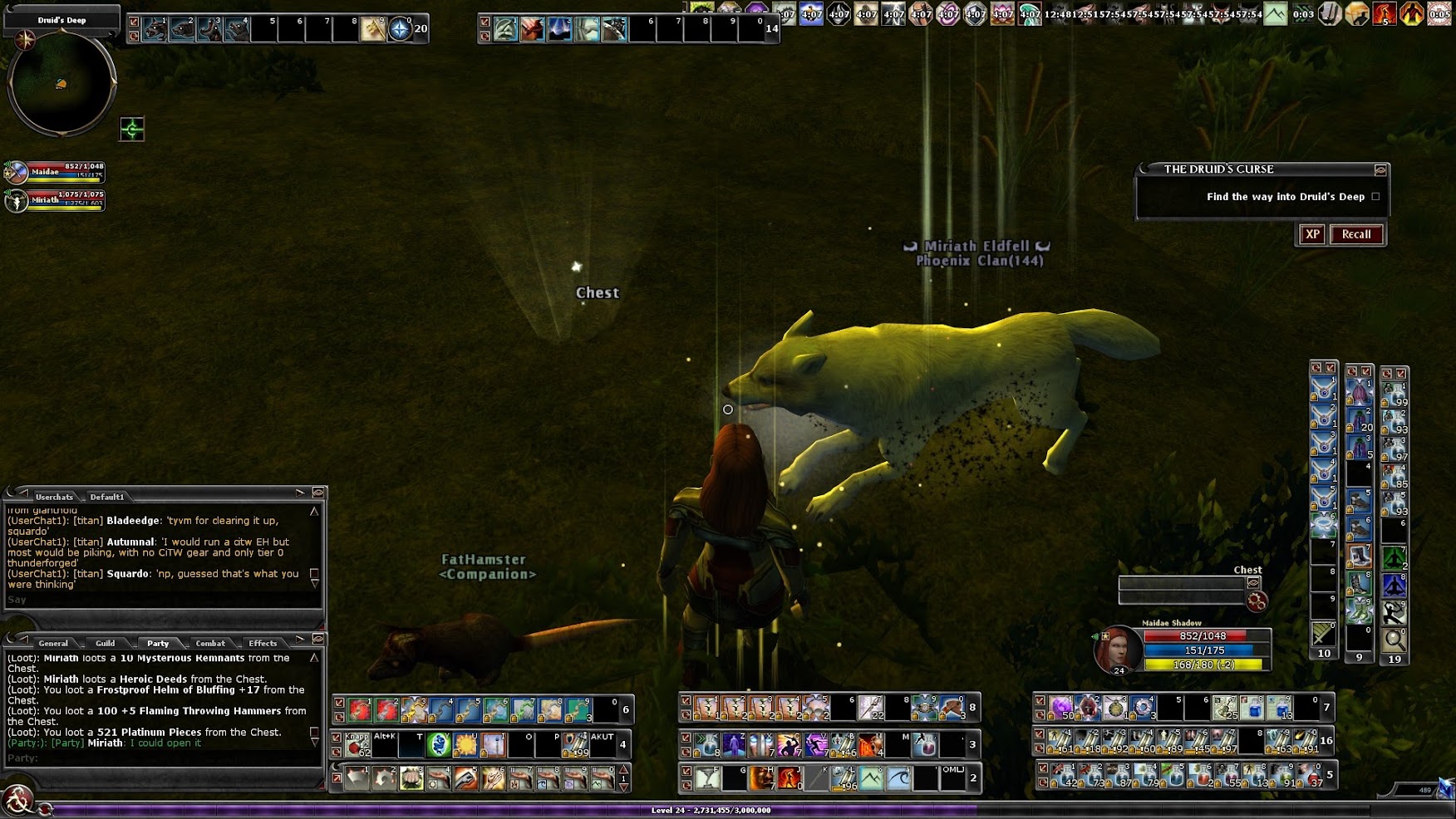 Me and Miri running EE Druid’s chain back in June.

I don’t exactly know why Miri decided to leave, he said something about wanting to try something different, and then removed his toons from the guild. I’m sad to see him go, and a little disappointed that he didn’t give us a chance to try and convince him to stay. I wish him all the best in his adventures and hope he decides to come back at some point

P.S. As I may have mentioned, my guild is like my family in ddo, so it does make me sad when ppl leave. Osi did come back recently, though.

It’s my last night in Croatia for this time and I wanted to do short blog. I’ve been here for close to 2 weeks, some of it in the east, some of it in the west by the sea. I went to spend time with Darth in his home country before he’s moving to Sweden. In a few days we’ll be common law spouses, so yay! 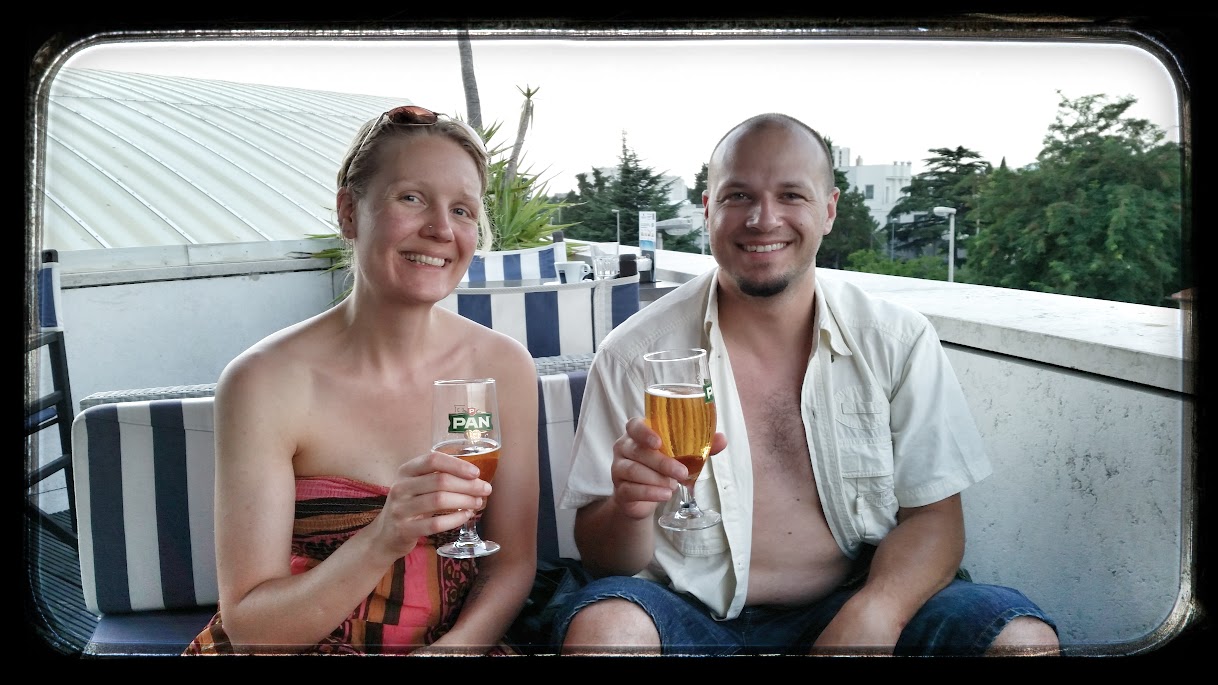 Thaz & Darth in Zadar. We went for a beer before going to see a movie.

The trip has been fine… in Sweden it was around 19C when I left, and in Croatia it’s been 30+ so quite a big difference. I’ve been trying to get a tan for the winter, lol. With Darth’s move and such, it will be a bit longer before I can get back to the raids and stuff but have no fear.. I will. 🙂

Over here I haven’t had much of an internet connection, so I haven’t been able to play ddo (except to log on a couple of times mostly to say hi to the guildies), so I am also looking forward to getting back home and back on stationary, lol. I also haven’t had a chance to check out U27, so that is another thing I’l looking forward to. 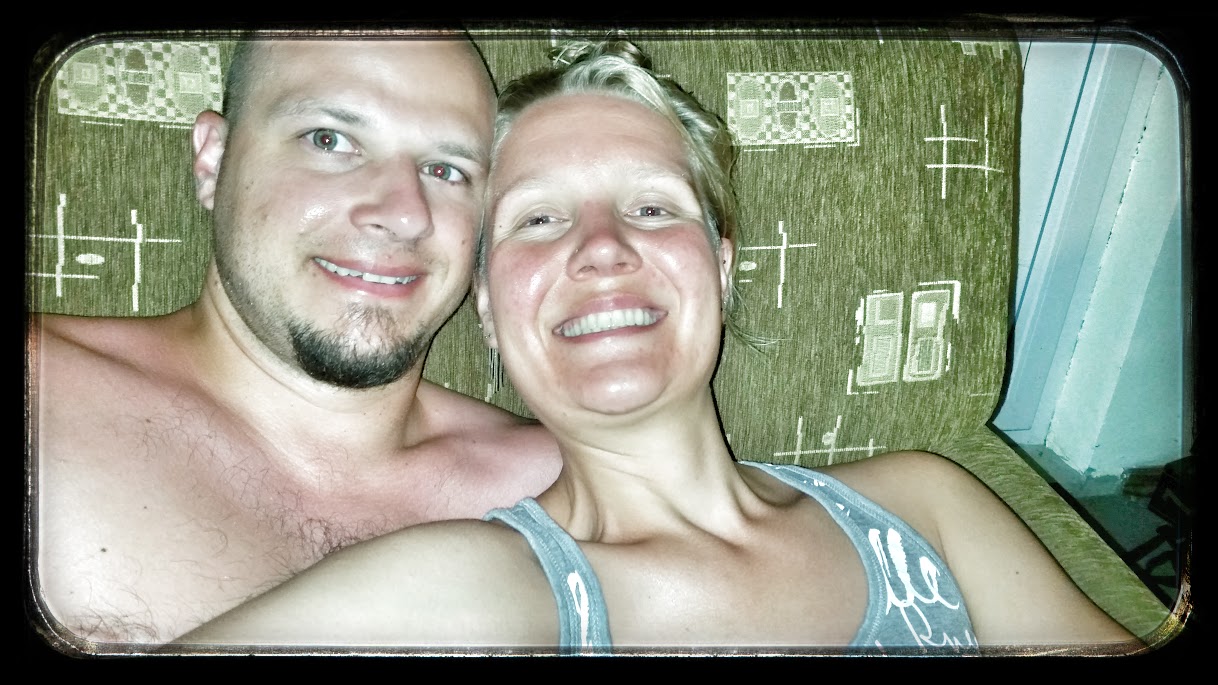 Last night, tried to take a selfie of us… but it didn’t work out so well, lol.

Anyway, that’s my short update. I hope to see you all in game see.

Remember how we changed our guild name to Phoenix clan not too long ago? Me and the guildies were talking, and Miri suggested “Born from the ashes”, and I said “well, that’s the phoenix”… and Urgan then suggested Phoenix clan.

Well, what I didn’t tell you was that before this, I had made an appointment to a local tattooist to get a new tattoo on my leg. Guess what image was going to get? Here’s the result. 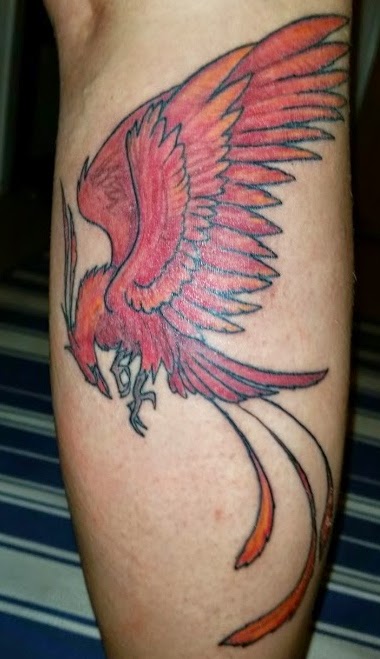 P.S. This is my first color tattoo, and yes I wanted my phoenix to look more like a bird of prey than a peacock.

Dear diary, I feel a need to write about my feelings again….

As I might have said before, this blog is a bit like a diary. I used to write one, but after I started blogging, a lot of my internal turmoil has been posted here. I have some issues, I want to be what others expect of me, but at the same time I want to walk my own path. It’s constantly an inner battle, wanting to please others, fighting for my right to be myself, and it easily turns into anger. Especially towards the ppl I care about. I’m very good at putting all my frustrations on them, instead of just letting it go. I might need to take up boxing or something, sometimes I wish I was more of a guy who didn’t express his frustrations so much in words and just put it in lifting weights or something.

My issue? I decided years ago that every life I do in ddo has to matter, has to be a learning experience and that I want to take them to cap and run raids and ees. Each past life I acquire needs to mean something, I learned something from it. But.. this is not how most play the game. Ppl zerg heroics for heroic past lives, then they zerg epics for epic past life… or alternatively they stone their past lives and don’t really play them at all, to acquire as many past lives as possible, and after they’re done they build a toon for the end. Only problem is that the end doesn’t really exist anymore, and ppl prefer to just keep running for the past lives. Which means that once they’ve acquired all their past lives, they don’t really have a reason to play anymore.

I’m constantly fighting to keep playing the game the way I want to, while others tell me I should do this and that. And not only is it the way I play, but I also get called elitist. Isn’t that ironic? To some groups I’m too elitist, and should step down to their level.. to others I’m not elitist enough, and need to exclude ppl who are not good enough.

This wanting to please everyone is hard, and it messes with my head a lot. Though, I think the fact that I cheat on my sleep affects my emotions a lot, and negatively. Need to work on that.

That’s all folks, thank you for stopping by and have a wonderful day.

It’s time for a personal blog again. It’s been a while since I did one. 🙂 Donno if you’ve noticed, but I haven’t been playing ddo much at all the last couple of weeks and that’s because “da boy” has been at my place visiting me. I haven’t really told you the story, have I? Who he is, how we met and such? On Orien ppl know him as Darth… cause all his toons have “darth” in their name. I can’t remember if I had run with him before or not, but I remember we were both regulars in the EE FoT group that was doing regular runs of that raid, starting fall of 2013. He was an active ddo player and I remember talking to him a little in channel. I asked him about his relationship status and he said he had just broken up with his girlfriend and was not looking for anything. I didn’t ask because I was interested in him, I was just curious. 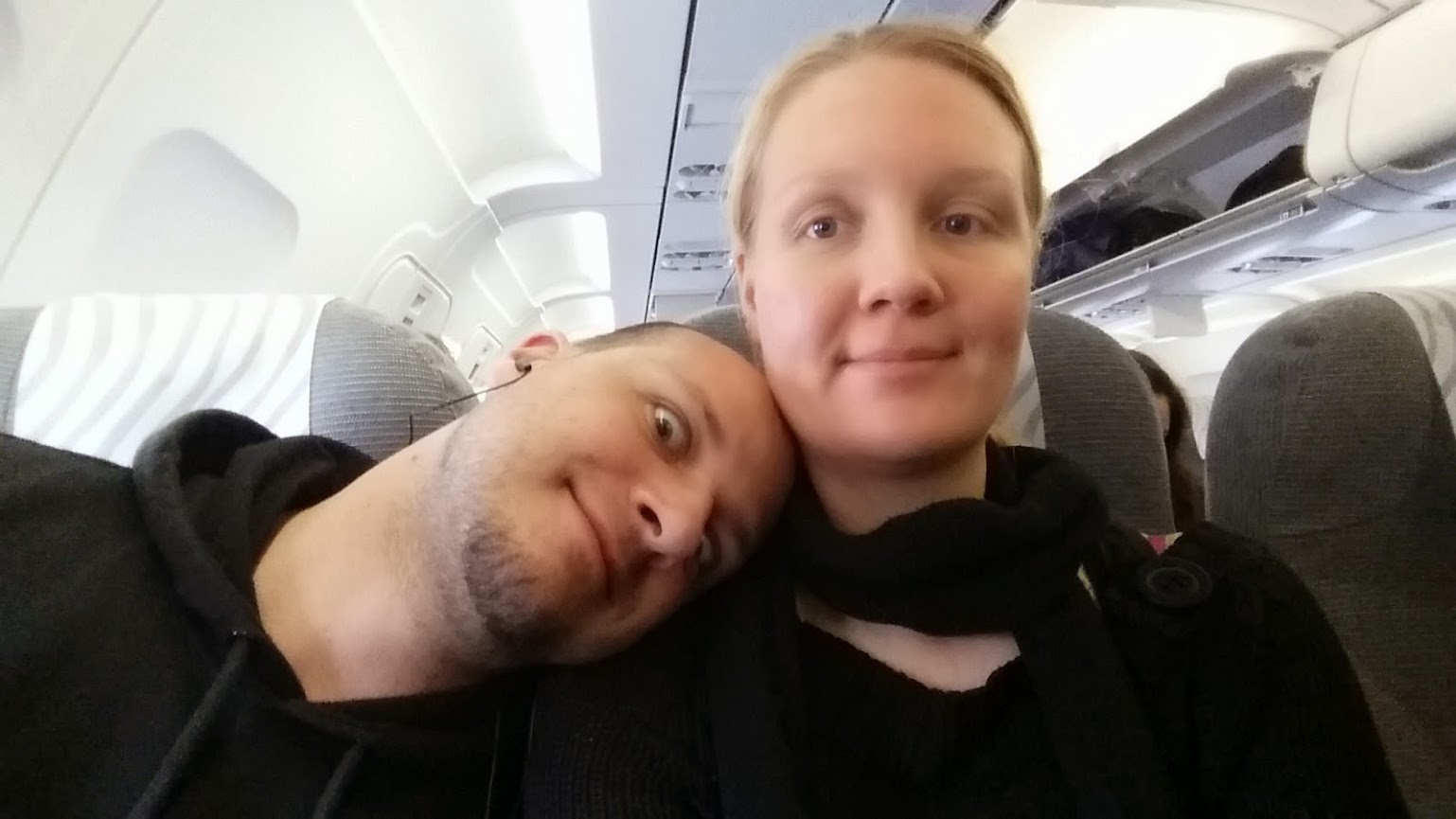 I asked him about a build and he linked me one he had posted on the vault. Later I decided to pm him on the vault, just about my typical random bs that I do, lol. We started mailing back and forth, and he suddenly says “So when are you coming to visit me?”. “Are you serious?”says I, and a few weeks later I ordered a trip to Croatia. This was pretty much the craziest thing I had ever done… but I was trusting that he wouldn’t be a murdering rapist, lol. Things turned out better than expected..  he’s quite different irl, than online… much nicer, lol. We seem to get along great, and I’d say that’s unusual for me.

END_OF_DOCUMENT_TOKEN_TO_BE_REPLACED

This was my computer last night 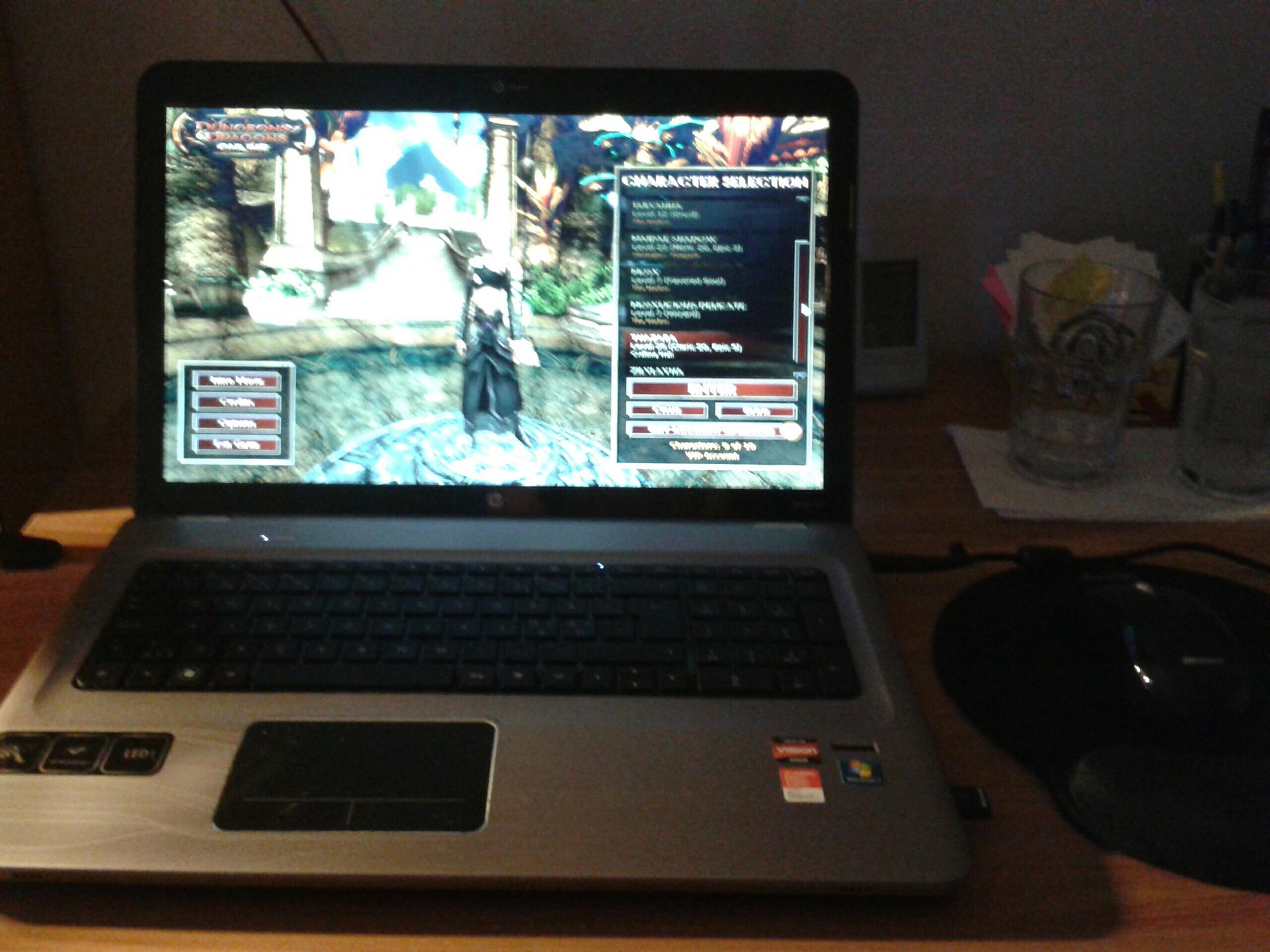 END_OF_DOCUMENT_TOKEN_TO_BE_REPLACED

🙂 I got my hair cut and straightened at the hairdresser’s today, and showed a pic on twitter and to some friends, including Osi. He said it looked very Matrix, and then made me this… 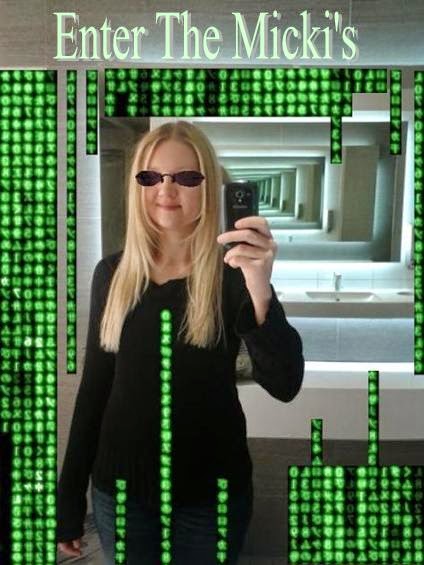