I am again a week behind on the raid post. Raids 170 were Tuesday March 14, Wednesday March 15 and Saturday March 18.

Here is a quick run down.

I decided I wanted to start doing practice runs of this raid to let ppl try different roles and get more comfortable switching roles as needed. I made this decision a few hours before posting, put it in the calendar and then decided to run a sharn quest or two while waiting for joiners. Interest was low and the two joiners I got early got tired of waiting and left. After 1.5 h I had enough joiners to do the run. I spent a good long while talking through the roles before the raids. Loot: 64 nemesis runes, 25 threads of fate and The Zarash’ak Ward. I’m unsure who’s idea it was, but we decided to run PN elite. The run had some messy moments, but we got through without needing to use jibber’s blade. Completion time: 42 min, 47 s. Loot: 125 nemesis runes, 35 threads of fate, Gauntlet of the Iron Council, Staggershockers, Wildwood Wrists and Stickerclick, the Bitter Hail of Bolts. We continued with thth. We lagged a little, but managed to complete. Completion time: 11 min, 50 s. Loot: 64 forge runes, 25 threads of fate. Osi was our dragon tank and I think Narguul was on shadows. Completion time: 29 min 2 s. Loot: 84 time runes, 24 threads of fate, Nullscale Armor, Staff of Irian and Elyd Charm. I am unsure who was on which boss for this run. I attempted to get some screenshots of the laser and the crystal changing color. Completion time: 24 min, 39 s. Loot: 84 nemesis runes, 30 threads of fate, The Eclipse Itself, The Wide Open Sky and Radiant Ring of Taer Valaestas. 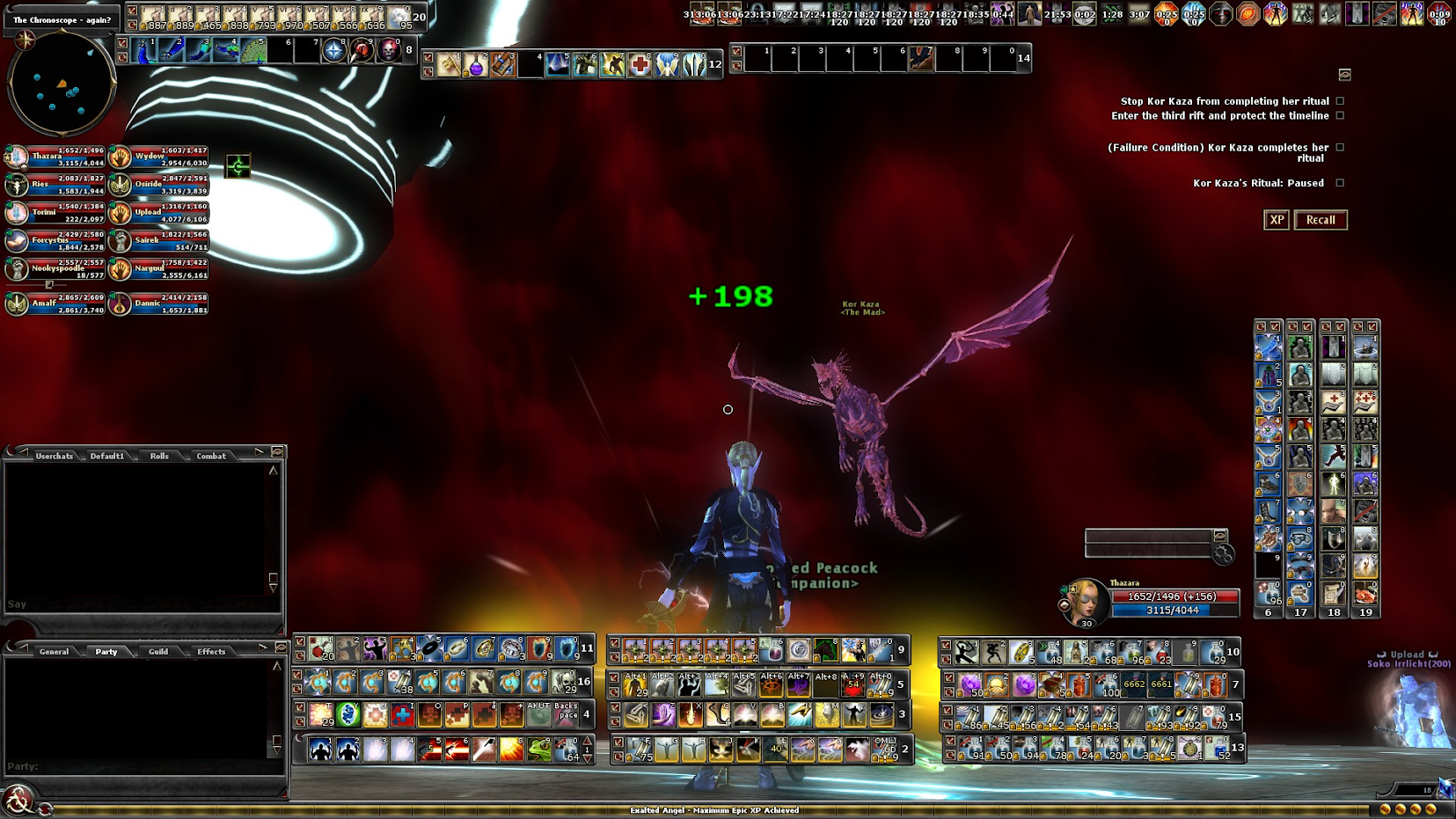 Back to another run of PN. This run I wanted to test it and see if the person with Gish aggro gets chained if Zulkis is dead – as we were told it’s actually Zulkis that casts it and not Gish as previously believed. We did Zulkis first and Gish last. It did seem like it was true. Completion time: 26 min, 12 s. Loot: 84 nemesis runes, 30 threads of fate, Staggershockers, Gauntlet of the Iron Council and Band of Diani ir’Wynarn. We filled quickly and I asked the party to split up half and half. Completion time: 21 min, 37 s. Loot: 125 defiler runes, 14 threads of fate, Ultimatum, a +6 upgrade int tome, Boots of Blessed Travels. Some party members wanted a strahd and I agreed to it as the last raid of the night. Since we had a dedicated tank (Bruder) I figured R1 would be a non issue. I think Kiandra took the sunsword. Completion time: 38 min, 8 s. Loot: 125 strahd runes, 26 threads of fate, Duality, the Moral Compass, Fleetfoot Necklace, Calamity, a Brush with Death, Flow, the Piercer of Hearts and The Masque. That’s all for raids 170.
Thank you for stopping by.