I posted on Orien Discord an hour before that I would be posting for raids, and the lfm went up at 9 pm my time, after inviting Torimi. The group filled without issues and Balphanar played main tank, Torimi was on laser and Jorye + Dexxy ended up placing Gish. I went into earth room, only to zone in in a circle and die. Completion time: 18 min, 20 s. Loot: 84 nemesis runes, 30 threads of fate and Molten Adamantine Gauntlets. We continued with thth, 2 spots opened up and one was first filled with a piker bard. The attempt lag froze in the first round, and after waiting about 5 minutes to wipe – and not wiping, the ones who could released or recalled. I had to give lead to another player for the instance to reset, as it was so lagged out that resetting didn’t work. Flamicia and Talelin joined for attempt 2, and this time we managed through the few lag spikes that appeared. Completion time: 12 min, 56 s. Loot: 64 forge runes, 25 threads of fate. Some wanted another PN, while some left so I posted an lfm again and we filled. This time Vintovka played main tank, Syken was on laser and I don’t remember who I placed on Gish. The run started off a bit messy, but we managed to get control of it. Completion time: 24 min, 21 s. Loot: 84 nemesis runes, 30 threads of fate and Stickerclick, the Bitter Hail of Bolts. When I logged on, Osi had created a guild party and gave me the star. After asking in channel for joiners and inviting them, I posted on the lfm. It didn’t take too long for us to fill. Ositank was main tank, I asked Titus to place Gish, forgetting that Ries usually does that. Torimi was on laser. Completion time: 18 min, 37 s. Loot: 84 nemesis runes, 30 threads of fate and Cracked Core. We continued with thth, like we usually do. Ositank was tank, I believe puzzlers were Erofen, Torimi, Titus and Pape. Completion time: 13 min, 2 s. Loot: 64 forge runes, 25 threads of fate. We lost a party member, I posted and we filled quickly. Osi was dragon tank, Imrys wanted to try kiting shadows with Titus as backup. I pulled aggro of 2 shadows without touching them and was trying to get the rest for a moment until I realized that Titus was already doing that. I let Titus grab the rest and headed to the group. Completion time: 36 min, 49 s. Loot: 84 time runes, 24 threads of fate, Tornado, Chaosbow and Wind Howler Mask. I as usually let ppl vote for the next raid and LHOX got some votes. Cruax brought in that char to tank, Torimi was charmer and Talelin buffer. I stayed center to keep rebuke going on momma HOX and told everyone else to keep killing trash. We needed two rounds of charming for momma to become vulnerable, but other than that it was a smooth run in my opinion. Completion time: 15 min, 20 s. Loot: 125 xorian runes, 7 threads of fate, Buckler of the Celestial Soldier, Robe of the Celestial Sage, Leathers of the Celestial Sage and Devil’s Defense. 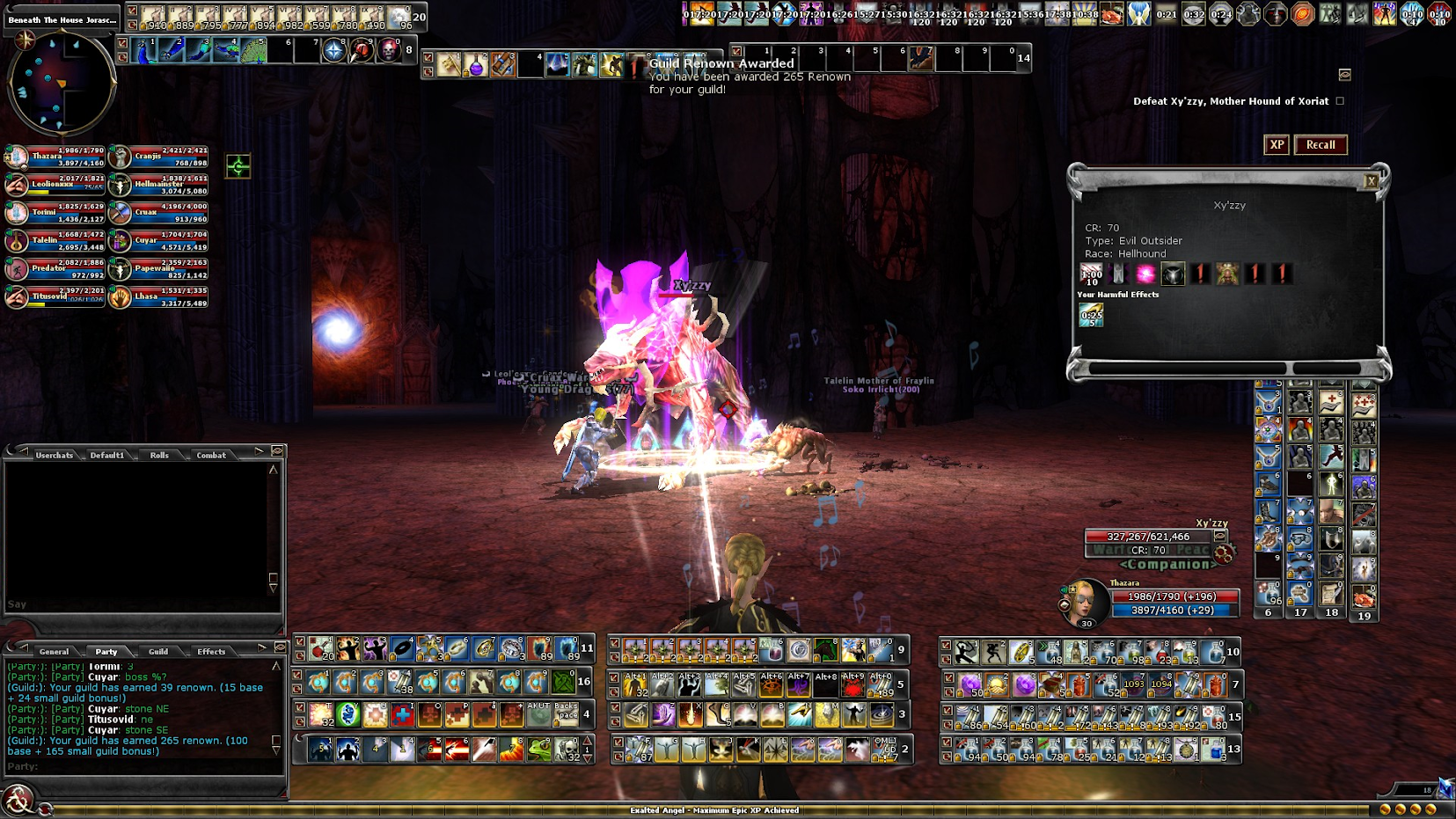 5. The Curse of Strahd LE

Next party wanted to do a strahd run. I Posted for the free spots and we filled. Simlock got to play tank, Talelin and Torimi did trinkets. In my opinion it was a smooth run, and we had no deaths in doors part. Completion time: 29 min, 8 s. Loot: 125 strahd runes, 26 threads of fate, The Masque, Echo of the Tome of Strahd, Flow, the Piercer of Hearts, Coat of Van Richten and Hands of the Dawn Healer. 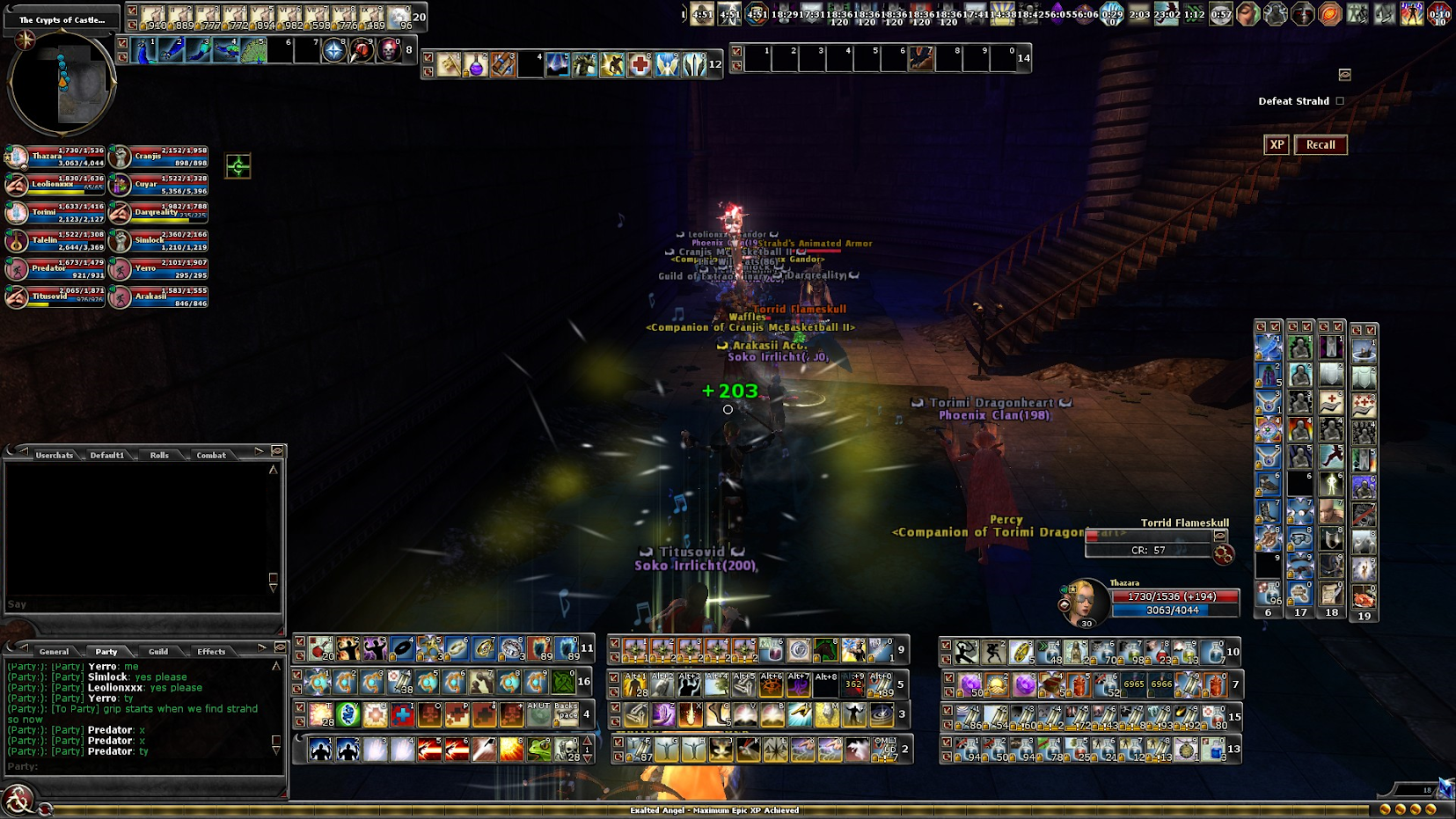 Ara wanted another PN and I posted. Our first attempt things went sideways when our tank died right at the start and things spiraled out of control from there, so Cruax brought in tank and we tried again. Second attempt went much better. Syken was on laser again and I don’t remember who I asked to place Gish. Maybe both the pallies. Completion time: 20 min, 16 s. Loot: 84 nemesis runes, 30 threads of fate, Molten Adamantine Gauntlets and Helm of the Final Watcher. I got some suggestions for LTS and okayed it after a couple of ppl confirmed that they could reach the required 75 str for the levers we need to pull. The int requirement is only 50, so even if we hadn’t had the rogues in party, I could have done int myself. I piked the start of the raid and caught up with the group in the room with the rust monsters. End fight had some deaths, but was still quick. Completion time: 11 min, 55 s. Loot: 125 tempest runes, 19 threads of fate, Leathers of the Celestial Avenger, Terminus and Leathers of the Celestial Sage. I asked the group if the wanted to run something more and baba was suggested. I didn’t want to wait for a tank so decided on hard. I asked Titus to do teams and she placed me on left side – a side that I rarely do. I was on puzzles and took unnecessarily long on some of them, but I don’t think I slowed us down too much. End fight was quick. Completion time: 24 min, 51 s. Loot: 84 hut runes, 19 threads of fate, Spite, the Fractured Shards and Van Richten’s Spectacles. 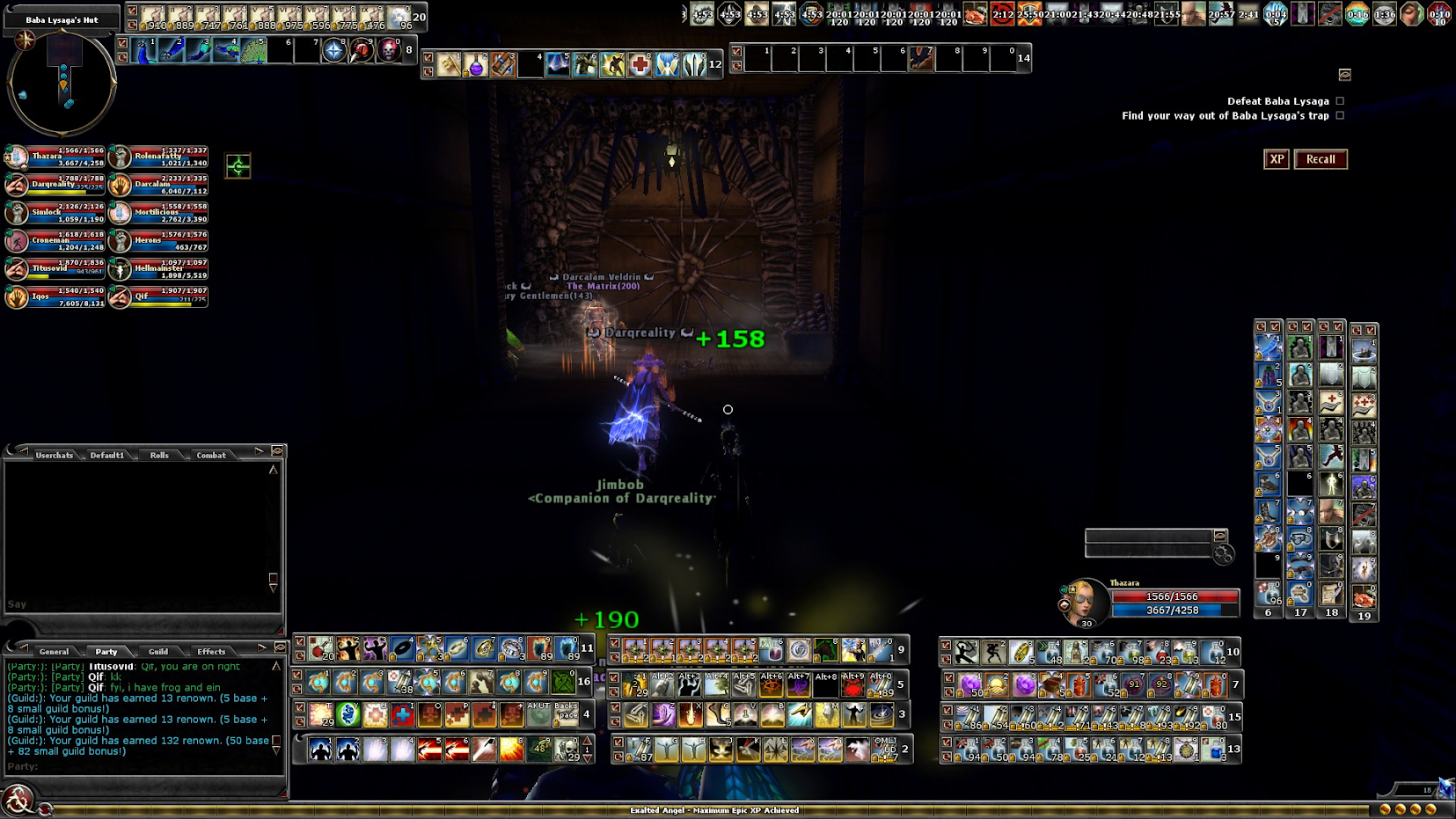 After baba I didn’t feel like running more raids.
That’s all for raids 164.
Thank you for stopping by.