The Wednesday raids were just after update 45 and the raid took a bit longer to fill, probably because a lot of ppl who would have joined instead TR’d into an alchemist. I was running the new 64 bit client and was seeing funny yellow effects – every once in a while when I looked at the characters, their names would have turned yellow/ gold. Guild names below 160 would also be the same color (160 upwards have a different color already). Update 45 also saw a nerf to inquisitive, and PN felt like it took longer. Completion time: 27 min 15 s (with waiting inside before starting). Loot: 84 nemesis runes, 30 threads of fate. Since the first run of PN felt a bit difficult and took longer than usually to fill, I wasn’t in the mood to try thth. Instead I posted for another PN. The second run was a bit easier with Osi and Torimi joining. Completion time: 23 min, 13 s. Loot: 84 nemesis runes, 30 threads of fate, Attunement’s Gaze, Baz’Morath, the Curator of Decay and Molten Adamantine Gauntlets. Saturday started with PN and after the first few invites, the last few spots took a while to fill. As we were waiting, Torimi was trying to log into the game and I saved the last spot. Balphanar was main tank, Ries Gish and Titus and Torimi laser (swapped for one of the elemental rooms). Completion time: 34 min, 22 s. Loot: 84 nemesis runes, 30 threads of fate, Gauntlet of the Iron Council, The Family’s Blessing and Key of Rhukaan Draal. We continued with thth. I and Quilo were on sunbursting, Palter on trash. When the first skulls appeared I ran to help out and before they were down skulls had spawned on the other side and started killing ppl. The party managed to get the titan down to do second puzzle phase but at that point trash was out of control and we couldn’t recover. Second and I think third try I called a restart because we lagged badly and I didn’t think we’d be able to do it. I also noticed one of my sunbursts had lost all the metas I had activated on it, which made it much harder to kill things. As we stepped in for try 4 I told the group that if we don’t complete this time we’ll do something else. Run 4 lagged a little, but it was manageable and we managed to control trash as well. Completion time: 17 min, 6 s. Loot: 64 forge runes, 25 threads of fate, The Broken Blade of Constellation and Piston Boots. The screenshot shows my stats with the lovely bard buffs. 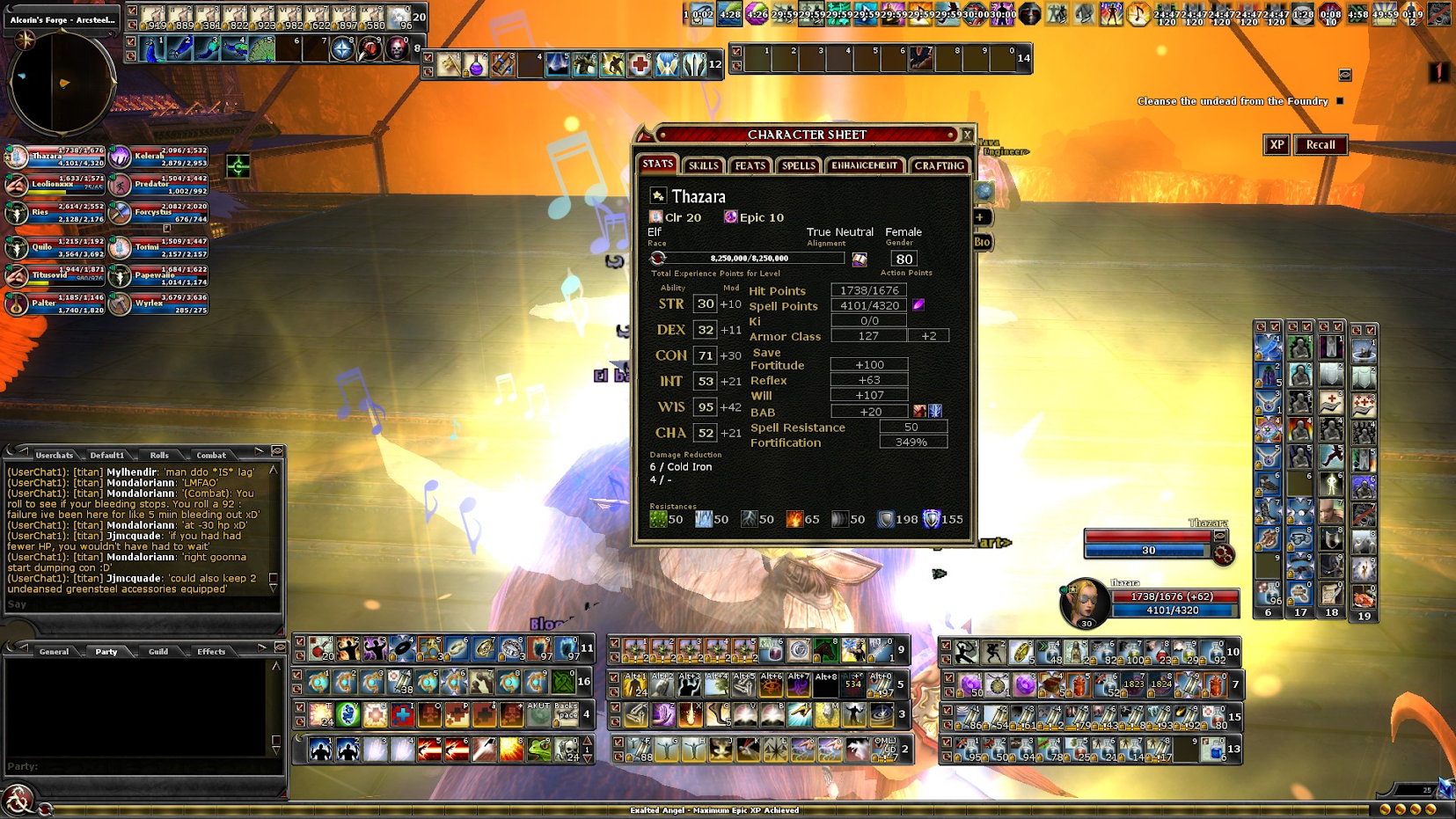 I let the party vote and KT got the most votes. Cruax switched to that toon to tank for us and I kited shadows. Forcystus kited dogs in LoB room. Completion time: 36 min, 5 s. Loot: 84 time runes, 24 threads of fate, Ring of the Silver Tongue and Chaosbow. 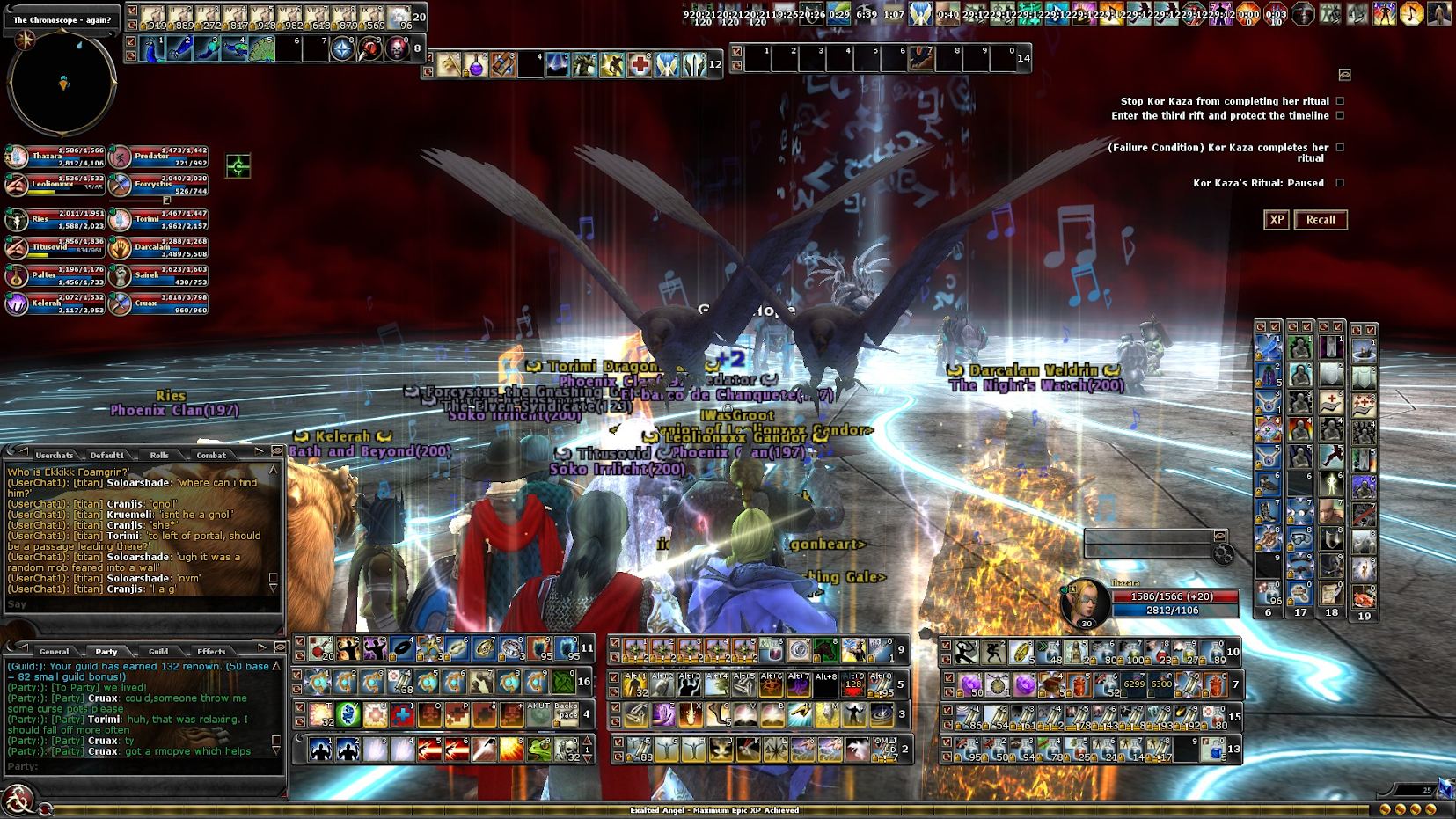 Some party members wanted Strahd and Baba, so I posted. Interest was close to non existent, so after waiting a while I suggested we short man hard. I was worried that we’d struggle a lot on the stairs, but things were quite smooth. I and Torimi carried trinkets, Forcystus the sunsword and Cruax was tank. Doors part completed with just 1 death and the end fight was smooth. Completion time: 31 min, 7 s. Loot: 84 strahd runes, 24 threads of fate, Hands of the Dawn Healer, Bell of Warding and Duality, the Moral Compass. I posted for Baba and we actually managed to fill. We didn’t have a tank so I suggested LH. I asked Titus to do teams. Most of the run was quick and smooth, with the occasional lag spikes. I did notice though, that sorc’s burning hands or similar spell cause the scarecrows to respawn about as fast as when I use mass frog. In the end fight Forcystus wanted to try tanking shamblers and I agreed, throwing him a heal/cocoon once in a while. Dps was high enough for us to not get the debuff. Completion time: 27 min, 32 s. Loot: 84 hut tunes, 19 threads of fate. I was getting very tired, but agreed to do one more PN before logging off. I posted but interest was low so I suggested a short man normal. Lion was on laser and Torimi wanted to try tanking everything. I was struggling to focus on one thing and let T die a few times, before I suggested a change of tactics. Completion time: 21 min, 26 s. Loot: 64 nemesis runes, 25 threads of fate. That’s all for raids 161.
Thank you for stopping by.