Wednesdays are more quiet than Saturdays, but we didn’t have to wait too long for a full group. I think Torimi was on laser and I asked Alyjxis to kite Rudus until we were ready for him. Gish jumped up on the wall again, but not as high up this time. Completion time: 23 min, 18 s. Loot: 84 nemesis runes, 30 threads of fate, Staggershockers and Helm of the Final Watcher. 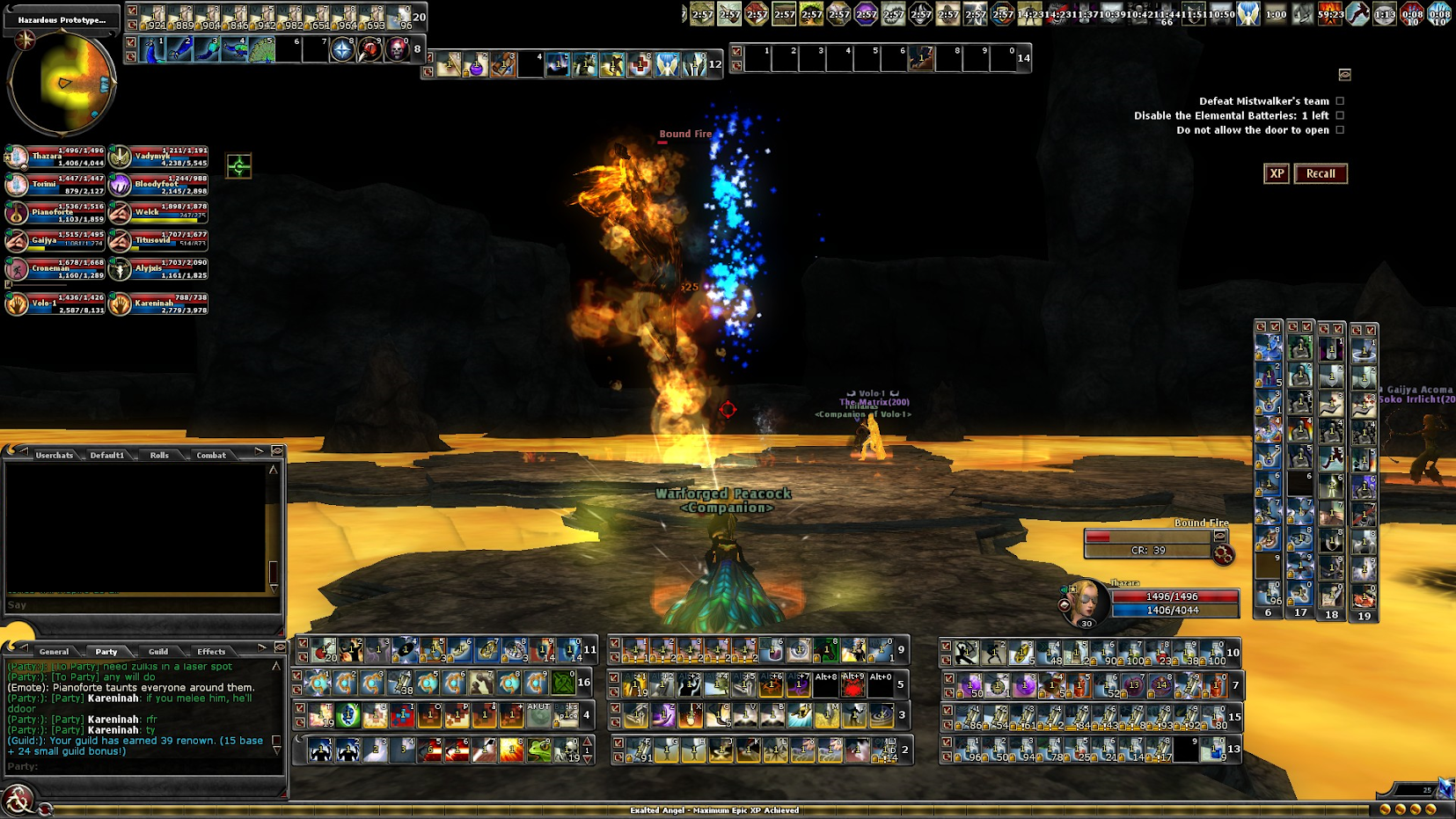 We continued with thth. Carlinee was tank, sorcs on runners and skulls and I helped with what was needed. This raid has been quite laggy of late and we lagged this time as well. Completion time: 14 min, 41 s. Loot: 64 forge runes, 25 threads of fate and The Shattered Hilt of Constellation. I asked the group what they wanted to run and posted for the free spot. KT was chosen. Since we didn’t have a tank or tank like char in the party, I suggested normal, then said I was going to take dragon. For the rifts anyway. I expected our dps to be very OP for normal – which turned out to be true. I didn’t spend long with the dragon before the rest of the party joined me. Completion time: 19 min, 6 s. Loot: 20 threads of fate, 64 time runes and 2 schisms. We were discussing what to run next, someone suggested Thunderholme and I said sure to an fotp. Since this raid is lower level than both KT and sharn, and characters have gotten a lot stronger since this raid was end game, I told the group that this was going to be quick. I assigned Torimi and … I forgot who to the dragons (two inquisitives) and said that if someone steals aggro they can keep it. Completion time: 13 min, 12 s. I didn’t screenshot loot, but everyone of course got a phlogiston, runes, threads and scales. I had time for one more raid and agreed to do a PN. I posted, we got a few joiners, but the party didn’t fill. I figured we could handle hard anyway. I was on laser, I suggested V kite Rudus and Lursana placed Gish. Completion time: 25 min 41 s (with some waiting inside). Loot: 84 nemesis runes, 30 threads of fate. Saturday I tried to fill from channel, but there wasn’t enough ppl asking for an invite, so I posted an lfm. We filled fast and started with PN. Tahlua was on Rudus, Ries Gish, I think Torimi did laser. Near the end we had some bad lag. Completion time: 23 min, 22 s. Loot: 84 nemesis runes, 30 threads of fate, Attunement’s Gaze, The Family’s Blessing, Band of Diani ir’Wynarn and The Zarash’ak Ward. We continued with thth and I wanted to do the “disable in the second round” – tactics. First attempt failed with some lag and runners getting past so we restarted and used the old tactics where we disabled in the third round. Run was a bit slow but completed. Completion time: 17 min, 26 s. Loot: 64 forge runes, 25 threads of fate. I asked the group to vote for the next raid, and KT had the most votes, so I stepped into KT. Tahlua kept dragon, I kited shadows, I don’t remember who took Nyt and I didn’t assign LoB tank or dog kiter. It worked out, though. I was quite happy with my shadow kiting as I for the first time managed to get all the shadows in the first try. Completion time: 32 min, 15 s. Loot: 84 time runes, 24 threads of fate, Cloak of the Mountain, Staff of Irian, Lightning Coil and at least one schism. Someone suggested strahd, we waited for ppl to switch and stepped in. Since I know Tahlua can handle tanking on hard, while we haven’t tried elite yet, I chose an easier hard run. I was on trinket and I think Torimi took the other. Completion time: 24 min, 59 s. Loot: 84 strahd runes, 24 threads of fate, Calamity, a Brush with Death, Flow, the Piercer of Hearts and Echo of the Sunsword. Some party members left after strahd and I decided to post for another PN. This run I think Tarthir was on Rudus and Lursana on Gish, or Lursana was on laser. Completion time: 17 min. Loot: 84 nemesis runes, 30 threads of fate and Molten Adamantine Gauntlets. I figured we could do another thth and posted for the free spots (some left) and when Komrad joined on his cleric I switched to Cerge for more dps. I again wanted to do the disable in the second round tactic and we tried it. We lagged a bit and skulls stayed up too long and killed us. I suggested we try again with the old tactics and this time we had the same issue – skulls didn’t die fast enough and killed us one by one. After the second fail I wasn’t in the mood to try again.

7. Riding the Storm Out LE

Someone suggested RSO, and as I always want to run that raid I was all for it. Posted for the free spots, and suggested we do elite, since hard was a walk in the park last time. Tahlua was our tank and we mostly stayed together during the puzzle phase. Completion time: 34 min, 27 s. Loot: 125 kor kaza runes, 25 threads of fate, Glacial Insignia, Arm of the Aggressor, Strap of Scale and Azure Guard. That’s all for raids 160.
Thank you for stopping by.