I posted an hour before on Orien Raiding about the raids and just after 9 pm my time the lfm was up. I usually also try to join the discord voice chat before posting, and some have taken to joining the voice chat while waiting for me to post the lfm. I don’t take this as a reservation, but as a sign of interest. Ppl usually have to either join the lfm or send me a tell asking for a spot. Ositank was our main tank, I think I asked Vilkar to take Gish but then failed to heal him. Vilkar also wanted to try laser, so I think he got to do that after we were done with Gish. Completion time: 19 min, 48 s. Loot: 84 nemesis runes, 30 threads of fate, a +7 con tome and Wildwood Wrists. With Morando in party able to handle heals and two sorcs for trash, I suggested I bring Cerge for more dps. We did the same tactics as last time – disable in part two and leave furnaces in part 3. I also recorded the run, but at the time of writing this I haven’t decided if I am going to upload the video. Completion time: 10 min, 4 s. Loot: 64 forge runes, 25 threads of fate and Hoarfrost, Herald of the Bitter Ice. I decided to stay on Cerge and we went back to PN. This time Balphanar was main tank and Osi played dps. Crone was on laser. Completion time: 22 min, 22 s. Loot: 84 nemesis runes, 30 threads of fate. 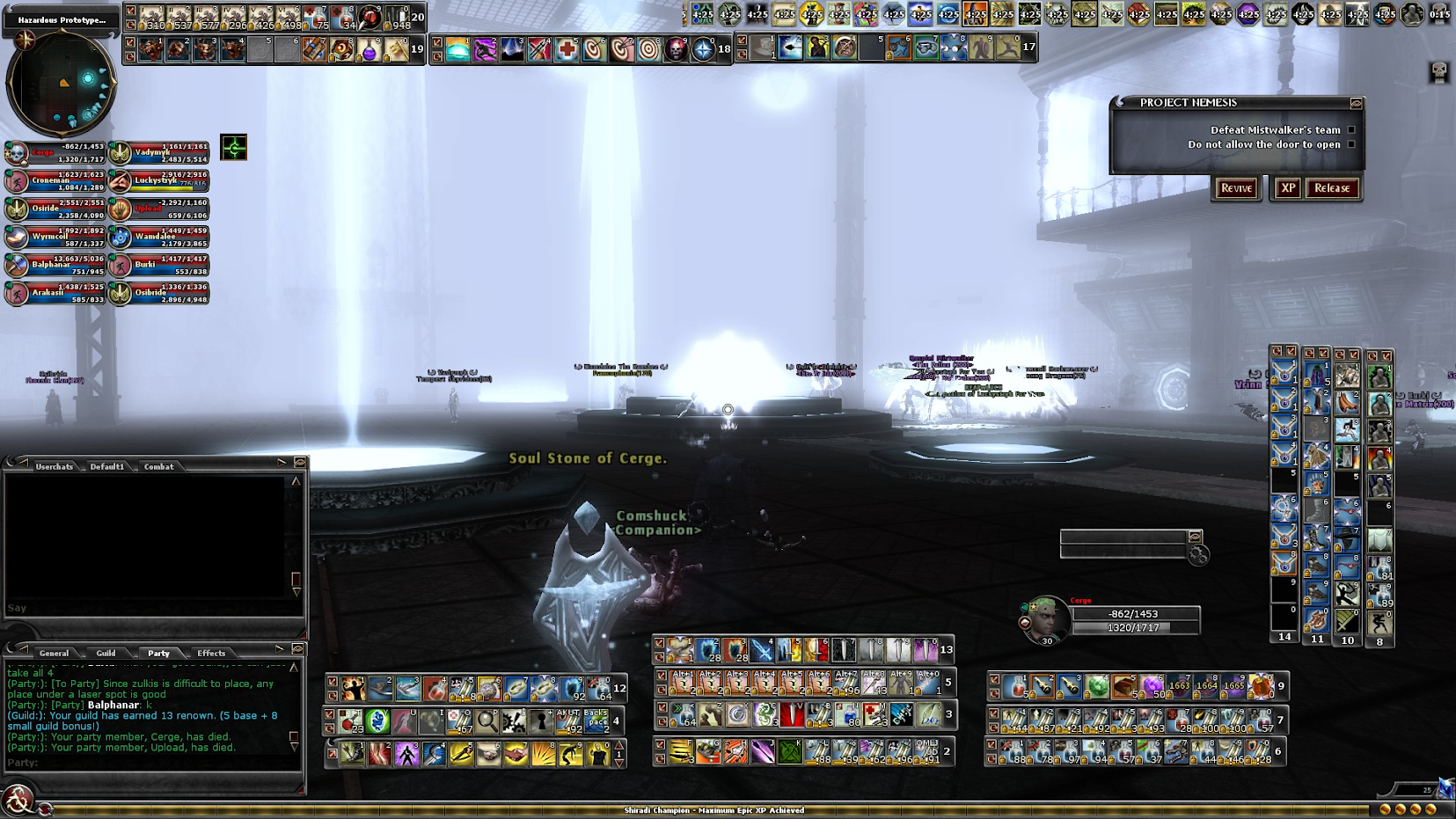 I switched to Thazara and we continued with another run of thth. I recorded this run as well, but have not yet decided on what to do with the video. The point of the video was to figure out the effect of the coolant tanks. Balphanar was tanking, Osi dps, Upload and Quilo on trash with a bit of help from me. This raid has been quite laggy of late and we lagged some this run as well. Completion time: 13 min, 23 s. Loot: 64 forge runes, 25 threads of fate and The Shattered Hilt of Constellation. Someone suggested another PN and I figured I’d have time for one. After having the lfm up for a while and we didn’t fill I decided on a short man normal. As we stepped in, Leo joined, so I wanted to wait for him before starting. Osi brought in a piker and Ferdo wanted to do all the bosses. Completion time: 17 min, 46 s. Loot: 64 nemesis runes, 25 threads of fate. Before doing anything else I wanted to test Rune’s heal amp vs my positive spell power – as I had said we could do before raids. I also joined discord voice chat and Osi has already invited the guildies and sent me an invite. The rest were invited from channel or tells. Rune was main tank, I think Ries was on Gish and Erofen laser. Completion time: 15 min, 17 s. Loot: 84 nemesis runes, 30 threads of fate and The Eclipse Itself. We continued with thth. Carlinee was our tank and I figured it’d be enough with Lhasa and me on skulls and trash. I recorded this run as well, but haven’t uploaded the video (yet). This time I wanted us to skip coolants entirely in the last phase, but 4 of them got done. Completion time: 14 min, 30 s. Loot: 64 forge runes, 25 threads of fate. As always I let the group suggest raids, except I said we wouldn’t repeat PN and thth right away. I picked KT and RSO, but after KT several said no to RSO, so we didn’t run it. As it turns out, Matrix was just about to start KT as well, and when I posted we didn’t get a joiner in the last spot, so Osi brought in a piker. Tahlua was main tank, I kited shadows. Completion time: 30 min, 46 s. 84 time runes, 24 threads of fate, The Staff of Shadow and at least 2 schisms. After a strong no for RSO, we picked Baba instead. Osi brought in Ositank to tank for us. I asked Osi to do teams, since I don’t like doing it, and on elite and up it’s better to have teams (tank, dps, heals on each side). We experienced som bad lag in this raid, but not enough to restart. End fight lagged so much that I saw the debuff go off 3 times, but it didn’t actually hit us until Baba died. Completion time: 34 min, 53 s. Loot: 125 hut tunes, 24 threads of fate, Echo of Ravenkind, Void, the Endless Cold, Volley, Arbalest of the Damned and Vestments of Ravenloft. Leo was done for the night and some wanted another PN, so posted for the free spot and we filled. I think Dwifor (if not it was Osi) took Rudus and party helped with Gish. I don’t remember who was on laser this run, as we had several who could do it. As we were working on the last battery, Narguul dc’d. Party listened and chest was left while we waited for him to come back. After about 10 min waiting, just as I was about to say we’ve waited long enough, he came back and got loot. Completion time: 13 min, 9 s. Loot: 84 nemesis runes, 30 threads of fate, The Family’s Blessing, Baz’Morath, the Curator of Decay and The Eclipse Itself x2. 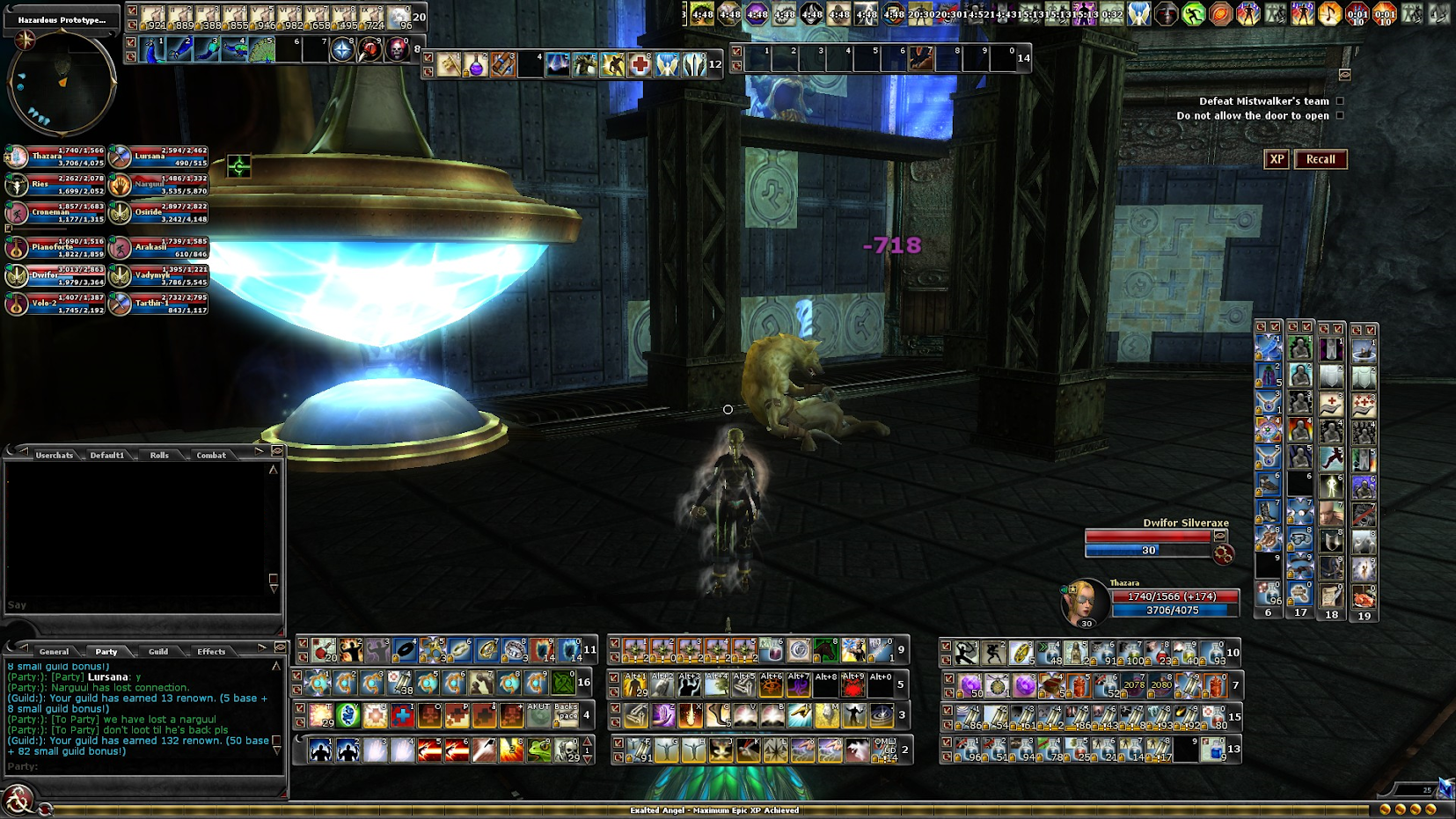 Osi left the group and I posted for thth. I told the party we’d have a bit less dps without Osi’s debuffs, but I wasn’t too worried anyway. Vintovka was our tank and I first told him not to do a puzzle, but then changed my mind as I wanted to do the new tactics where we only solve the puzzles one time. New tactics worked out this time as well, even though we did get a bit more trash and started burning during the last fight. Completion time: 12 min, 28 s. Loot: 64 forge runes, 25 threads of fate, Sigil of the Triumvirate and The Broken Blade of Constellation. 7. The Curse of Strahd LH

Strahd was suggested and I posted for the free spot. Tahlua was our main tank, I and Torimi carried trinkets. This raid quickly turned laggy, first during the first clearing of shadows and later on the stairs. Narguul got gripped as we stepped through to get to the stairs and Torimi got gripped just before the heart (I was running up after having jumped down to get someone who fell). In the end fight the brides got over prepped and died, we reprepped them and they were again over prepped but didn’t die this time. Completion time: 25 min, 3 s. Loot: 84 strahd runes, 24 threads of fate. 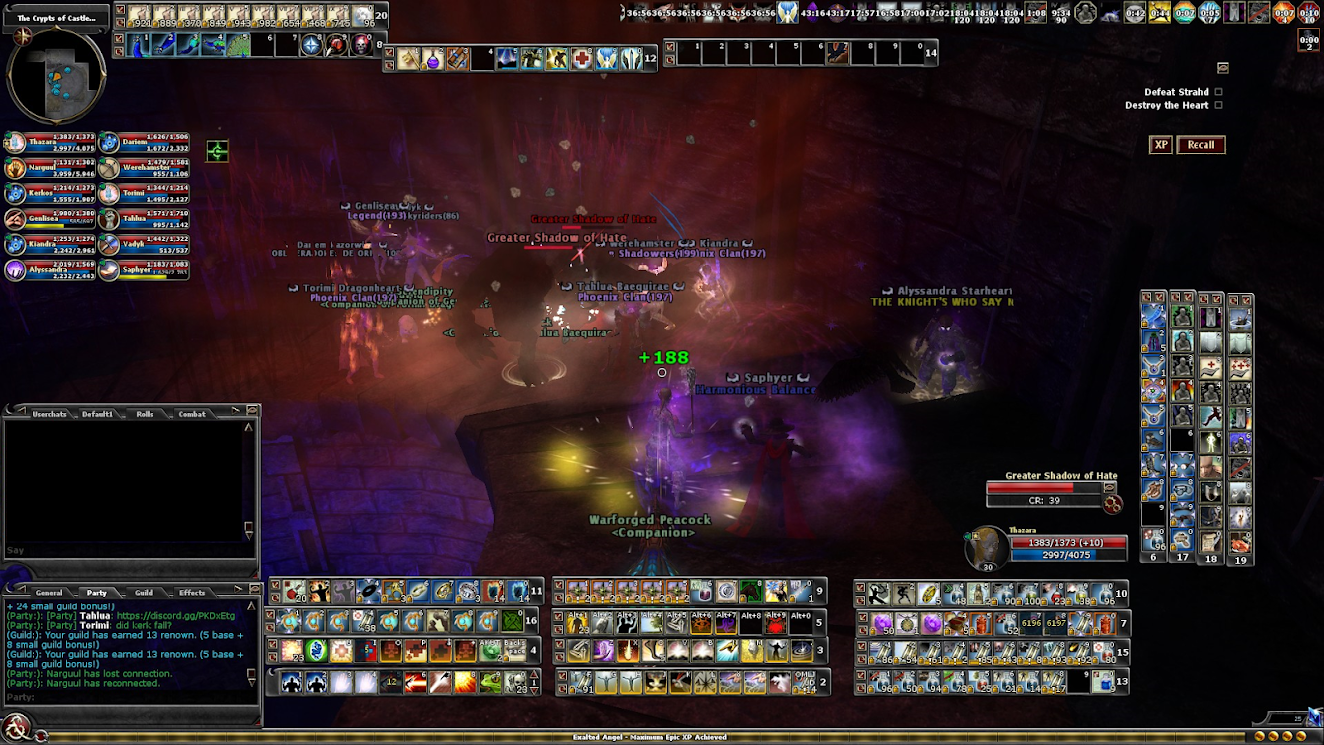 I was getting tired but was down for one more run of PN. As always, the last PN is hard to fill, which it was also this time. I figured we had enough ppl for hard, which I soon realised wasn’t true. We didn’t have a dedicated tank and both Gish and Rudus kept killing ppl. After noticing we were not progressing the raid, I called a restart. Normal fit us better and the run was quick and smooth without too many hiccups. Completion time: 15 min, 33 s. Loot: 64 nemesis runes, 25 threads of fate and The Wide Open Sky. That is all for raids 159.
Thank you for stopping by.