Raids 145 were Wednesday Oct 23 and Saturday Oct 26. I also joined Epic’s raids on Tuesday, but they’re not listed here. We did a total of 10 raid runs in these 2 raid nights.

1. Project Nemesis LH
I posted, we waited and we didn’t quite fill, so Epic brought in Epicsue to tank and was dualboxing. I asked Osi to take Rudus again. I was on laser. Completion time: 21 min, 36 s. Loot: 84 nemesis runes, 30 threads of fate, no named. 2. Too Hot to Handle LN
We continued with thth. Epicsue stayed on as tank, Osi got to play dps. We had a free spot which was filled quickly. I and Tetra were on skulls and forgewraiths. Things did get a bit exciting nearthe end again. Completion time: 12 min, 46 s. Loot: 64 forge runes, 25 threads of fate and Stolen Signet of ir’Wynarn. 3. The Mark of Death EH
I don’t remember if I made a suggestion, but Gaijya wanted to do mod, so I decided to post for it. We waited a bit and got a few joiners, then I decided to short man and Osi picked EH with 3 piker bots. I don’t remember who did which side but I think I helped west. Completion time: 6 min, 38 s. Loot: 84 death runes, 11 threads of fate, Circle of Malevolence and Sanctified Gages. 4. Fire on Thunder Peak R1
We finished the other raids rather fast, it wasn’t even 11 pm yet, so I figured I’d do another short raid. Fotp was chosen. I think I chose Qif and Xnn for dragons, letting Osi focus on dps. Completion time: 14 min, 35 s. Loot: 125 thunderpeaks runes, 18 threads of fate, and a fire dragon phlogiston per person. 1. Project Nemesis LH
I only had one guildie online when I logged and invited them to my party before posting. Gaijya has usually been online and in voice chat on discord when I log on, so when he sent me a tell at a quarter past 9, I realized I had forgotten about him. At that time we had already started. He got a spot for the next raid, though. The first raid of the night was Project Nemesis, Ositank was on Rudus, I asked Lursana to take gish and Komrad was on laser. Completion time: 22 min, 16 s. Loot: 84 nemesis runes, 30 threads of fate, Baz’Morath, the Curator of Decay, Helm of the Final Watcher and The Wide Open Sky. 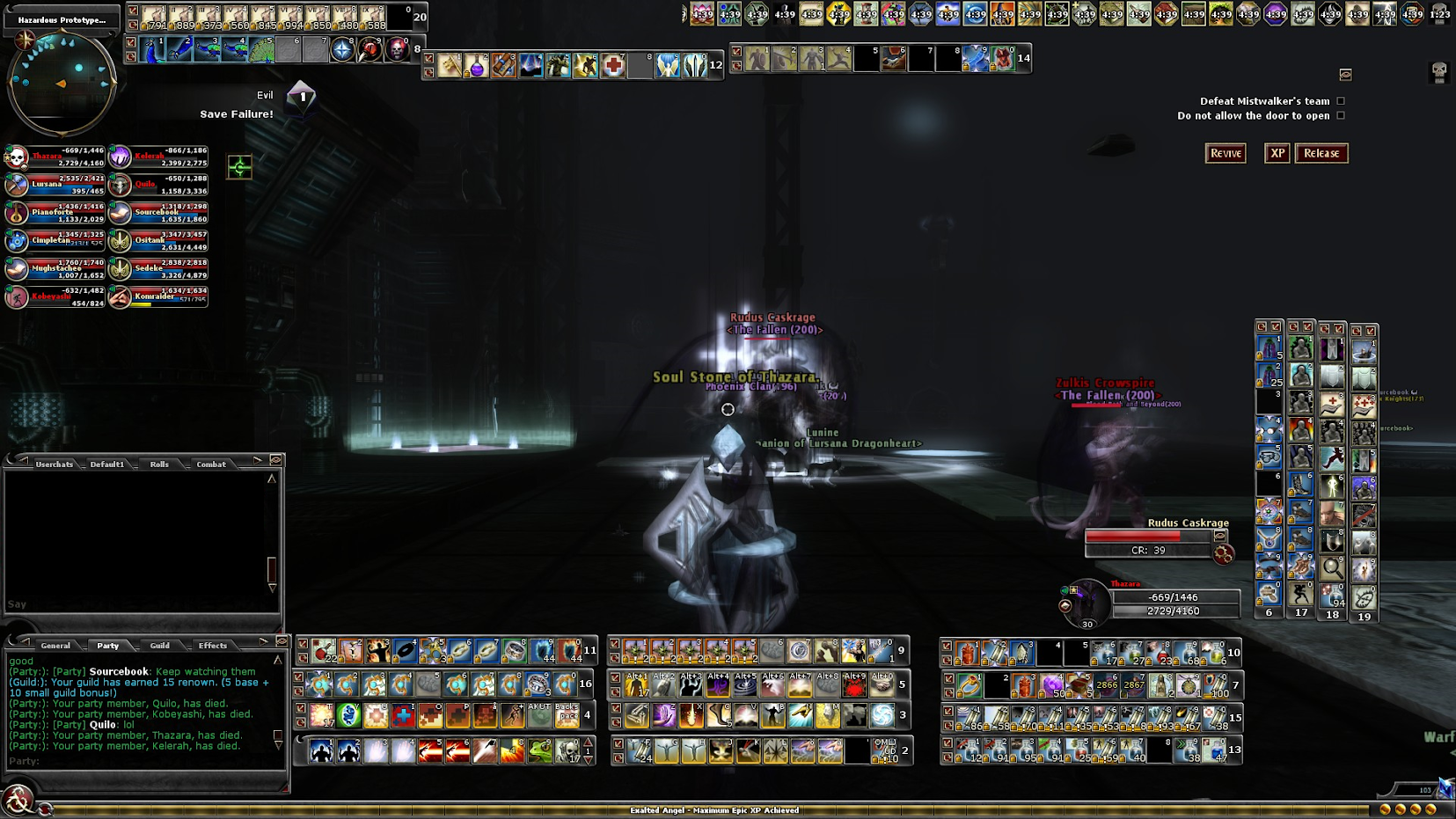 2. Too Hot to Handle LN
I and Quilo were sunbursters, Ositank was main tank, and I think I asked Kelerah or Sedeke to help with runners. I think things got a bit exciting near the end as it usually does. Completion time: 14 min, 40 s. Loot: 64 forge runes, 25 threads of fate and Sigil of the Triumvirate. 3. Old Baba’s Hut R3
I don’t remember who it was that suggested we run Baba, but Osi picked the diff and switched to his strongest char to tank for us. I asked him to split the party since I don’t like doing it. We had some lag and some deaths but the end fight was really smooth. Completion time: 38 min, 50 s. Loot: 125 hut runes, 24 threads of fate, Echo of the Icon, Suffering, the Half of Whole and Torn, That Which Renders Despair. 4. Killing Time LE
I again don’t remember who it was that suggested KT, but I let the group suggest the next raid. Osi picked elite. Komrad switched to tank. I guess I was a bit unfocused because I said I was going to heal Komrad during the second rift, but stood too close to the dragon’s head and got blasted. Though, K got my stone while the rest went into the rift and I got a raise as soon as the timer was gone. The party had some minor issues in the rift – the second rift is the hardest – but resolved it. Osi took the dragon for the third rift so Komrad could tank lob. Completion time: 43 min, 0 s. Loot: 125 time runes, 28 threads of fate, Lightning Coil and Hellstroke Heavy Mace. 5. Project Nemesis LE
Gaijya had asked for a rerun of PN since he missed the first one. Most of the party was up for another run. Osi wanted to do elite and I didn’t say no. Osi was our Rudus (and Zulkis) tank, Cruax gish and Soul parked Irk. Komrad was on laser. Just like in the LH run, the laser failed to absorb the elemental essence, even though the position and timing was correct. Luckily it only happened once. Check out the video below. Completion time: 39 min, 7 s. Loot: 125 nemesis runes, 35 threads of fate, Staggershockers x2, Molten Adamantine Gauntlets, Baz’Morath, the Curator of Decay, The Labrythine Edge, Key of Rhukaan Draal and a +8 dex tome. 6. Legendary Tempest’s Spine R3
I was down for another raid and someone suggested LTS. Since we had Osi I suggested we run at least R3 – since we’ve been doing R2s in 15 min or less. Most of the raid was easy, in the end fight Sor’jek was running around a bit, but it was still smoother that my previous R3. Completion time was about 12 minutes (I forgot to screenshot the quest report). Loot: 125 tempest runes, 19 threads of fate, Storm’s Harness and Leathers of the Celestial Avenger. That’s all for raids 145.
Thank you for stopping by.