I wasn’t able to do the raids last week, and I’ve also been too busy to do the blog for the raids the week before, so here it is finally. Raids 124 happened May 18, 2019. I was also feeling quite tired during raids and after 4 raids I felt done for the night. I believe Osi did one more raid after I logged.

1. Old Baba’s Hut R1
Shambler tank: Osiride, split for sides: left side Sokos + Lubash (who I keep calling Soko even though he isn’t), right side Phoenix Clan (my guild) and Lobfist. With Sokos (and Lubash) and my guild, we only had 1 free spot that was offered in EEraids channel. I was looking a bit at my stats with buffs (the picture I added). Tahlua took red crows, I helped kill lesser crows and a bit with puzzles, but tried to let others have a go. Completion time: 41 minutes, 58 seconds. Loot: 125 hut runes, 24 threads of fate, Gulthias Staff, Torn, That Which Renders Despair and Void, the Endless Cold. 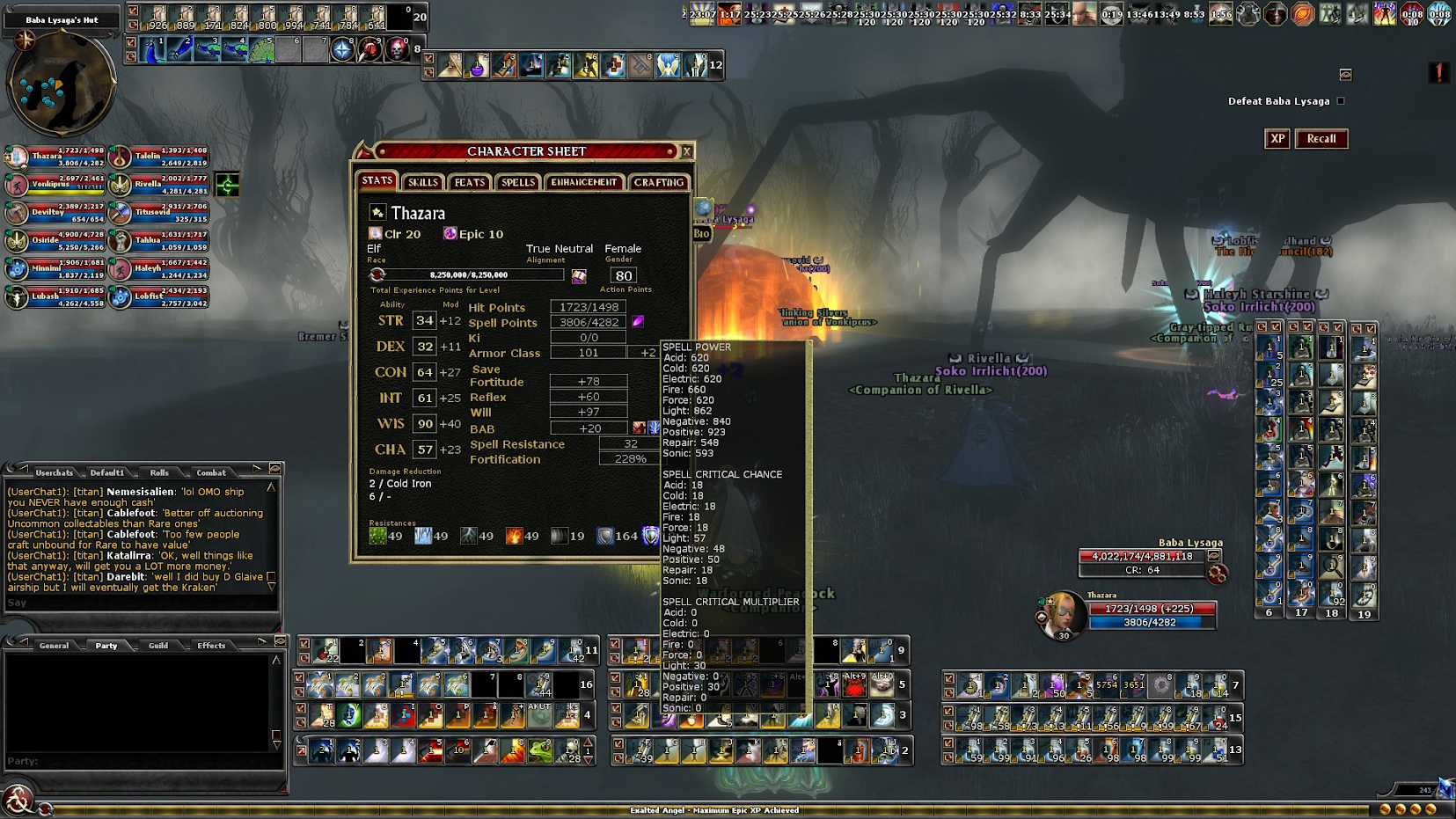 2. The Curse of Strahd R1
The same party stayed for strahd. Osi was our tank again, Tahlua got the sunsword, I one trinket and Rivella other. Some deaths on the stairs, cards were very quick. I had a moment of “oh, shit” in the end fight due to Osi getting gripped, but otherwise it was quick and smooth. Completion time: 28 min, 42 s. Loot: 125 strahd runes, 26 threads of fate, Flow, the Piercer of Hearts, Coat of Van Richten and Storm in a Bottle. 3. Killing Time LH
Devil changed character, otherwise we stayed the same group. Osi dragon tank, Lubash shadow kiter and Tahlua Nyt tank. I don’t know if this was my first hard run without deaths, but the run must have gone a lot better than many of our previous runs. Embarrassingly enough, I ran out of level 3 spell components (used for searing light) part way into KT. It’s not one of my main spells, but it is part of the macro, so the warning would pop up each time I ran it. Other than that, the raid was quick and quite smooth. Completion time: 35 min, 22 s. Loot: 84 time runes, 24 threads of fate, Chaosbow, Nullscale Armor and at least one schism. 4. Riding the Storm Out LE
We had a quick chat about what raid to do and more than one person was up for RSO. Osi did as he usually does and stepped in on the diff he wanted to do, which was elite. We stayed together, split up at the ravine and I died a few times. Other than that I felt it was a smooth run. Completion time: 34 min, 32 s. Loot: 125 kor kaza runes, 25 threads of fate, Bluescale Guides, Arm of the Aggressor and Symphony. After RSO I was feeling too tired to continue, and I also had to get up somewhat early the next day, so decided to call it.

That’s all for raids 124.
Until Saturday.
Cheers.