1. Old Baba’s Hut R1
There were not that many people in channel that wanted to join the raids so I posted on the lfm and we filled within 15 min. I asked Osi to do the split and as we were getting ready to start, Vonk seemed afk or lagged or something. Tahlua was back and took the scarecrows in the hut and Osi kited them outside and killed the shamblers. I had done a running event earlier in the day and it was affecting my concentration, I died more than I usually do. Completion time (with waiting for vonk): 39 min, 12 seconds. Loot: 125 hut runes, 24 threads of fate, Memory of a Tailor’s Duress, Torn, That Which Renders Despair, Patience Through Peril, Vestments of Ravenloft and a + 8 int tome. 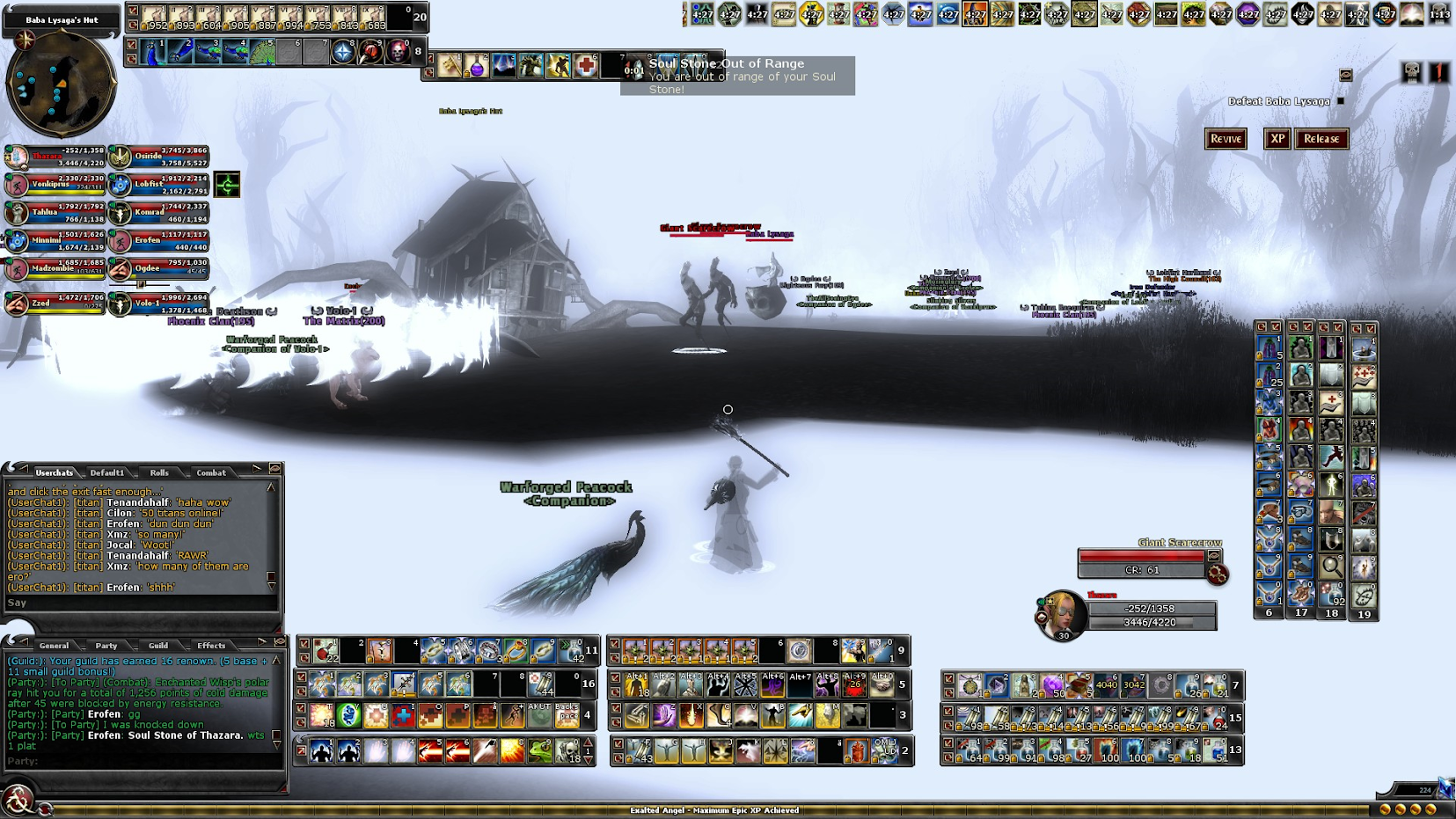 2. The Curse of Strahd R1
Someone wasn’t flagged and Lubash got the spot. I believe Tahlua got the sunsword, I got my trinket and Upload the other. Osi was tanking again. We had quite a few deaths in the heart fight, but fight was over pretty quickly. In the door part we found the cards fast enough, but then something happened where the audio kept saying “the torch refuses to light…”. I assumed it was just audio, but someone said the torch turned off and then that all were lit. Audio kept telling us that “the torch refuses to light” several times after we had completed the task and were gathering in front of Strahd’s tomb.

In the end fight I got gripped when Upload was dead, but I didn’t die. I believe it was due to Divine Intervention that Osi sometimes casts on me. The raid completed in 37 minutes, 33 seconds (including some waiting). Loot: 125 strahd runes, 25 threads of fate, Pain, the Half of Whole, Sanctity, the Morninglord’s Keep and Calamity, a Brush with Death. 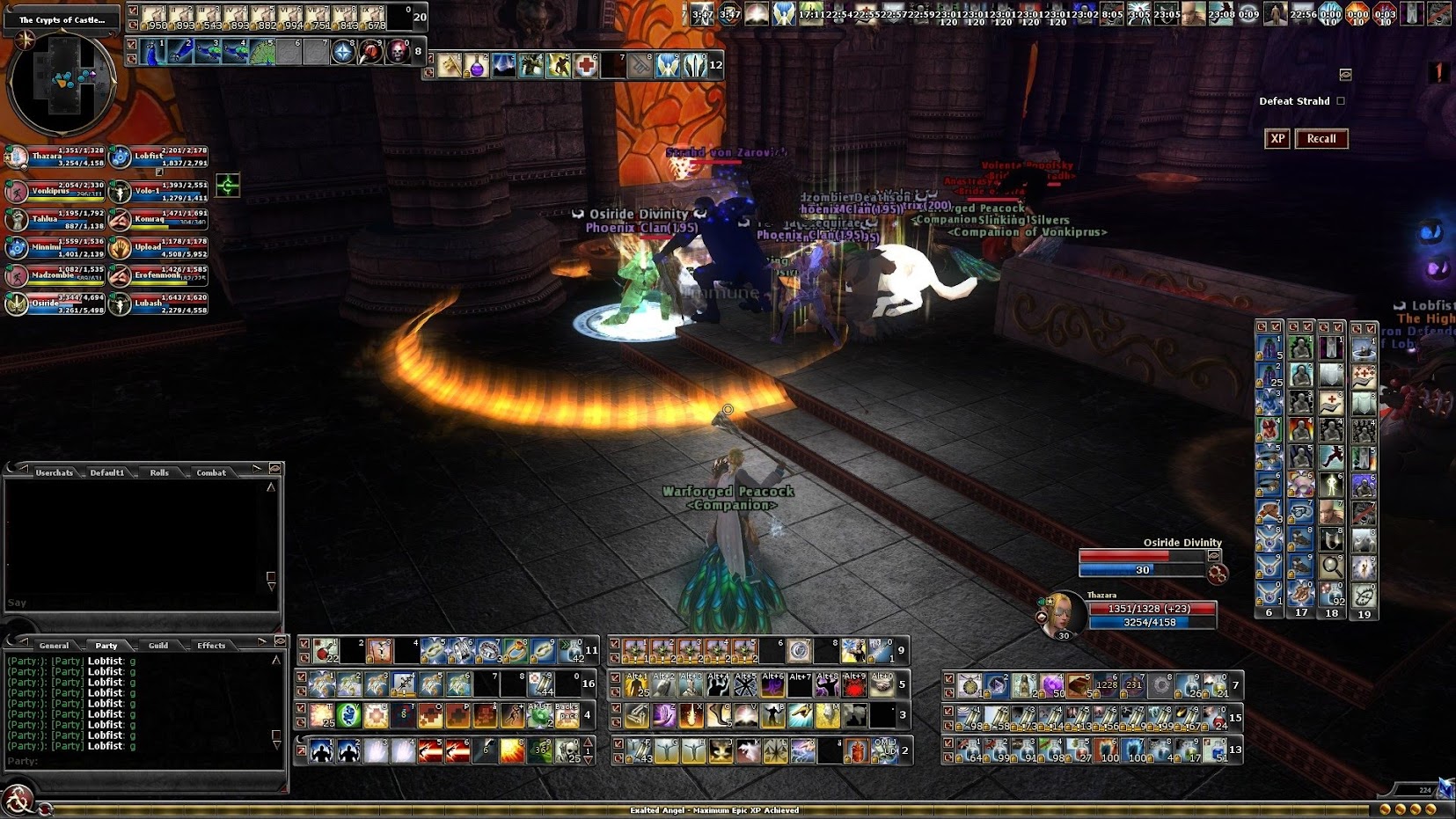 3. Killing Time LH
Osi was our tank again and Lubash shadow kiter. I felt like I played like crap and died several times. In the second rift Lubash wanted to go in alone and grab aggro before the rest of the party joined. This worked ok and we then pulled Nyt off him. Except for some deaths and a bit of a scare when the first trash spawned, the raid went well. Completion time: 38 minutes, 53 seconds. Loot: 84 time runes, 24 threads of fate, Gauntlets of the Stormreaver, Mail of the Mroranon. If any schism dropped I missed it. 4. Defiler of the Just R1
I was getting tired and did not feel like running RSO. Someone wanted doj and I said ok. Osi stepped in on R1 and for a while things were good. Then we got hit by crippling lag and a short while later we hit 12 reinforcements and were kicked out. I asked the party if they wanted to try again, and since everyone seemed up for another try, I got my sp back then stepped in again. The second time was better and we managed to rescue all the archons without lagging too much. The raid completed in 19 min, 55 seconds. Loot: 125 defiler runes, 14 threads of fate, Many-Hooked Greaves, Visions of Precision, Fellblade (longsword), Gauntlets of the Arcane Soldier and Dissolution. After doj I felt done for the night so thanked the party and logged off.
That’s all for raids 122.
Thank you for stopping by.