1. Old Baba’s Hut R1
I asked Osi to split the party and he split us Vonkiprus, Osride, Papewaiio, Minnimi, Palter, Upload left, Thazara, Madzombine, Lubash, Torimi, Soulhear, Erofen right. When we got to the puzzles with the red crows I happened to get aggro of them and couldn’t pick anyone I wanted to take over, so I decided to keep them. With Lubash frogging the lesser crows, I figured they’d be fine without my implosion and frog. For outside area Osi kited the red crows and later tanked the shamblers. Things progressed well, even if a bit slow. The raid completed in 34 min, 18 seconds. Loot:  125 Hut runes, 24 threads of fate, Void, the Endless Cold, Torn, That Which Renders Despair, Volley, Arbalest of the Damned and a +8 upgrade tome of charisma. 2. Killing Time LH
Since Gaijya of late only has time for two raids, I suggested KT as the second one (he usually wants to do that one). With Osi tanking Kor Kaza, I could stay with the party. In the second rift we had a shadow kiter and a backup shadow kiter, but shadows are tough and if you get caught in the middle of them you take a lot of damage in one go. I saw things going sideways and stayed far away from everyone, so when the party died I ended up the only one left. I used a scroll of fireshield and kept running and winging out or reach of shadows and Nyt – got blasted a few times. I managed to throw a raise to Vonk and he got the rest up, and someone managed to get Nyt off me. I continued running while the others killed the boss.

The rest of the raid progressed with minor issues and we completed in 43 min, 20 seconds. Loot: 84 time runes, 24 threads of fate, Bracers of the Mountain (for me and I kept them), Clouded Dreams, Cloak of the Mountain, and at least one schism. It doesn’t show in party chat when people pick them up, and sometimes people are quick to grab them. I was very exited about the bracers and trying them out in MoD. 3. The Curse of Strahd R1
Two spots opened up and I invited people from channel. Osi was our tank, I asked Vonk to grab the sunsword. I took a trinket and Torimi the other. Since we had at least one first timer, I explained some of the important parts, like spamming x or g when gripped. Torimi got gripped just before stepping through to the stairs, and it took me too long to realise it, since I was looking for fom that had disappeared from my hot bar. Stairs and heart fight went well and in door part we were quick. In the end fight Osi got to tank everything and we completed on the first try. Completion time: 38 minutes, 54 seconds. Loot: 125 strahd runes, 26 threads of fate, Nocturne, the Song of Night, Null, the Darkness Without and Platemail of Strahd. 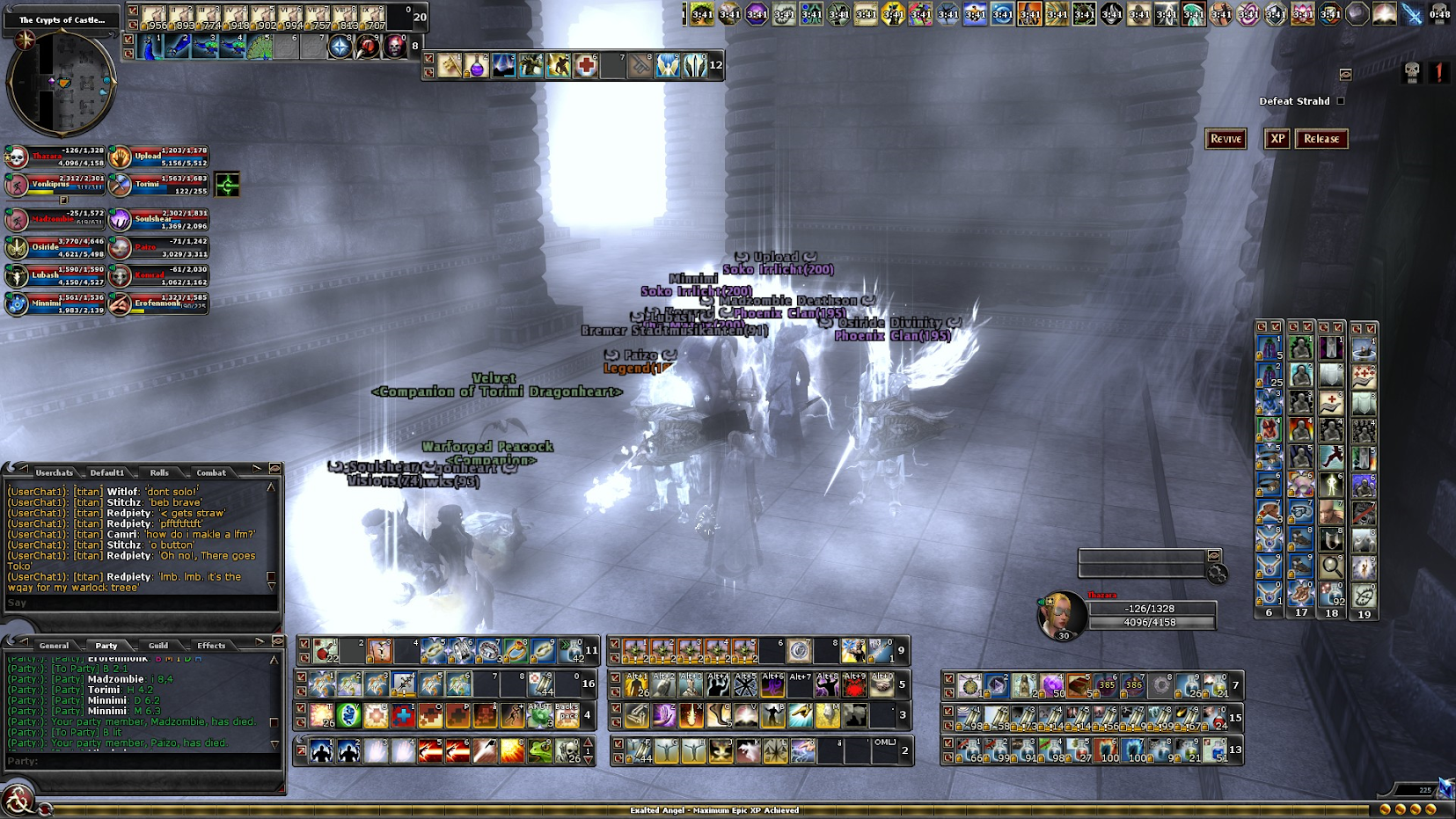 4. Defiler of the Just R1
I asked the party what they wanted to run and more than one person voted for doj, so I picked doj. I listen to people’s suggestions, but I usually make the final decision and if I have a preference, then I pick that one. Osi picked R1 and I didn’t want to do teams. The raid was very smooth without much lag and we managed to rescue all the archons. Completion time: 23 minutes, 39 seconds. Loot: 125 defiler runes, 14 threads of fate, Strange Tidings, Boots of Blessed Travels and Belt of Braided Beards. 5. The Mark of Death R1
Someone wanted to run MoD, and since it’s quick I was for that. I believe Ero wanted FoT, but I didn’t feel like running that one. I did actually ask this time for volunteers for the sides before starting (which I think I forgot to do some weeks ago). Things progressed with only a few minor issues and I was running around in my new bracers with immunity to petrification. This allowed me to keep my ED and still be immune to the Abbot’s encasement attacks. I successfully avoided them three times during the run due to my new bracers. The raid completed in 13 minutes, 40 seconds. Loot: 125 death runes, 13 threads of fate, 2x Circle of Malevolence and 2x Epic Quiver of Alacrity. 6. Riding the Storm Out LE
Osi stepped in on LE, then we again waited to fill. Osi had a buffer bard inside with us while we were waiting for more people. I feel like we’ve gotten the hang of running LE, and the only ones who struggle a lot are the ones who didn’t bring electricity absorb and sheath. Since the lightning spamming is timed, you could actually try to do puzzles between them and then not worry about having someone else heal you during.

We had worried about having enough dps for this run, but it seemed to work out quite well. The only time I complained was when the dragon turned around a few times and I believe I got hit in the face. Completion time: 49 min, 37 seconds (including waiting at the start). Loot: 125 kor kaza runes, 25 threads of fate, 2 x Discerning Gaze, Glacial Insignia, Cobalt Guard, and Acidic Insignia. That is all for raids 121.
Until the next time.
Cheers.