1. Old Baba’s Hut LE
Osi was playing Osiride and I more than once during the run forgot this. I asked Vonk to do the team split, and this is what was chosen: Left: Osiride, Vonkiprus, Terona, Gorefwar, Cimpletan, Madzombie. Right: Thazara (me), Zoom, Sesili, Nedlyne, Tetravortex, Palter. We were a bit slower on the totems than usually, but over all it was good. Tahlua usually grabs reds right, this week there was a bit of confusion until I picked a kiter/ tank. For outside area Osi kited red crows and tanked shamblers. Completion time: 31 minutes, 4 seconds. Loot: 125 hut runes, 24 threads of fate, Dusk, the Light Descends, The Invisible Cloak of Strahd, Suffering, the Half of Whole. 2. The Curse of Strahd LE
As we started this raid, the tanks were undecided. I asked osi to tank Strahd in the heart fight, and I carried one of the trinkets, Foxxy took the other. This run was much smoother than last week. Osi tanked Strahd in the end fight, but sunsword user changed. He also had the brides, which killed some of us. Completion time: 43 minutes, 36 seconds. Loot: 125 strahd runes, 26 threads of fate, Bell of Warding, Calamity, a Brush with Death and Platemail of Strahd. 3. Killing Time LH
Without a dedicated shadow kiter, Osi suggested we do normal, but I insisted on hard. In the end Osiraider (Vonk), ended up kiting the shadows successfully and we completed the second boss without much issue. It was the 3rd boss, LoB, where we ran into trouble and Osiride was asked to abandon his post as dragon tank and come help tank LoB. The timer was ticking, but I wasn’t concerned. LoB was at about 30% when Osi joined us and I knew we’d have enough time to kill him. Completion time: 53 minutes, 31 seconds. Loot: 84 time runes, 24 threads of fate, 2 schisms and Cloak of the Mountain. 4. Defiler of the Just EE
Since completing my set of screenshots of the RSO loot, I didn’t feel a need to run it. The party wanted Defiler and I suggested elite. I posted, we filled and I was asked about team split. I didn’t feel like splitting the party, just told everyone to spread out evenly, and this seemed to work out ok. 1 archon was lost, other than that we completed every task thrown at us. Completion time: 23 minutes, 33 seconds. Loot: 125 defiler runes, 14 threads of fate, Ultimatum and Fellblade. 5. The Fall of Truth R1
I again asked the party if there was a raid they wanted to run, and Ero wanted another chance at getting the rare pet from FoT. Since I rarely if ever run FoT now-a-days, it’s easy and short, I figured it’d be fun. Ero claimed that he and Osi could 2 man it R1, so I allowed them to bring in pikers (loot alts). Completion time: 14 minutes, 38 seconds. Loot didn’t interest me, so I didn’t take notes. I passed my comms to someone else. 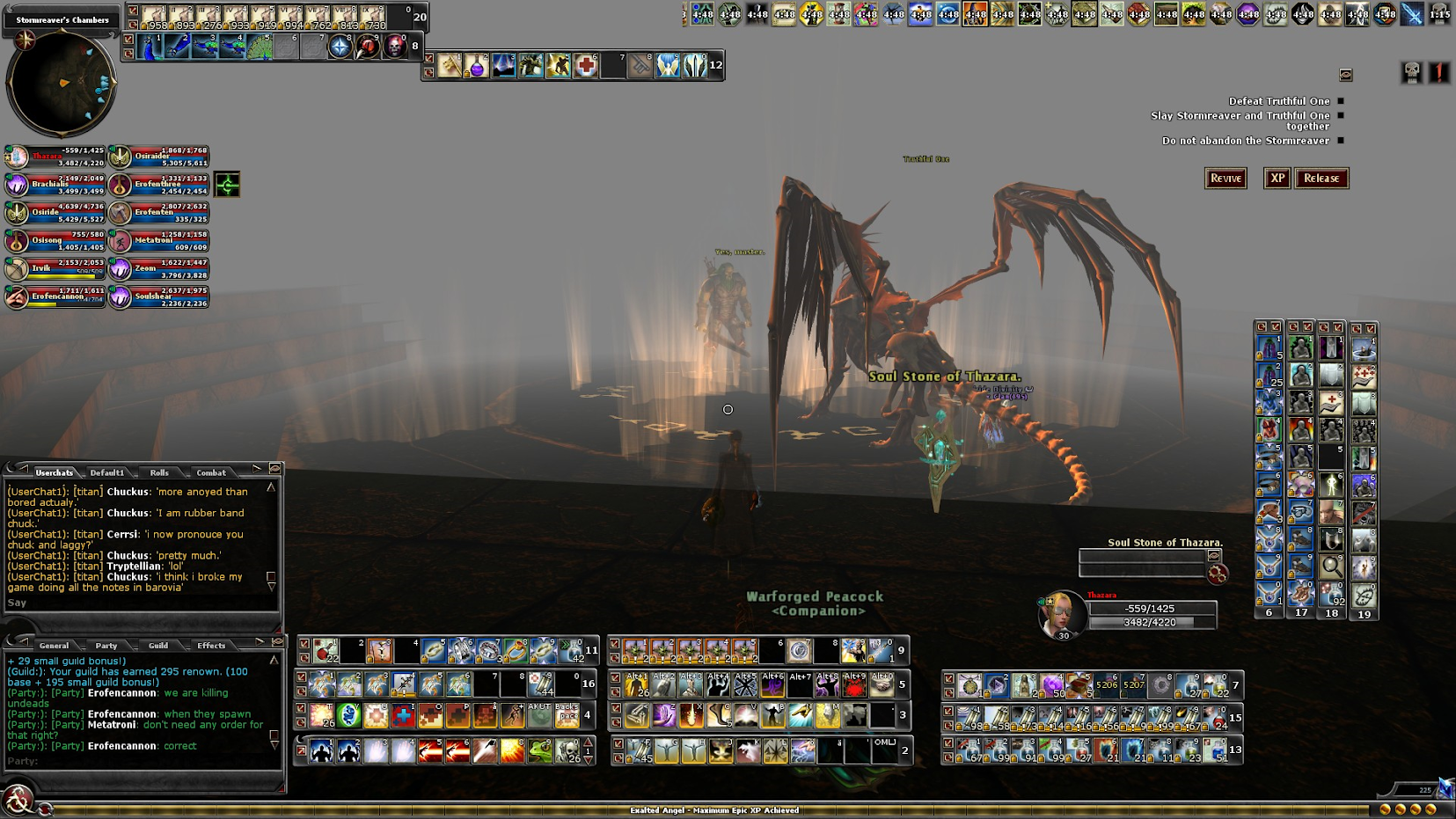 6. The Mark of Death EE
I was down for one more short raid and posted for MoD “diff undecided”. Tryp joined and asked for elite or reaper for favor. On reaper, the end fight can be a challenge, especially if you don’t have a full party, so after some consideration, I agreed to elite. I switched to my intersession ward goggles, but kept my ED, since I lose too much in crusader. Elite turned out to be quick and easy and we completed in 13 minutes, 43 seconds. Loot: 125 death runes, 13 threads of fate, Epic Quiver of Alacrity x2, Epic Deific Diadem and Epic Purging the Pantheon. That’s all for raids 120.
Thank you for stopping by.

P.S. If you’re on Orien and interested in the raids, feel free to /joinchannel EEraids endgame