1. Old Baba’s Hut R3
Osiride, Tahlua and Thazara from Phoenix Clan, 5 Sokos, rest from EEraids channel. Invite only. Since we did a successful R2 last time, I suggested we try R3 this time. Shambler tank: Titusovid, red crow tanks: Titus and Osiride. Sokos like to stay together because of out of game voice chat and usually go left, so I suggested Caducea as a 6th left. Wisps almost wiped us both in hut and outside. Right side was good on totem killers and puzzlers (I believe we were 4 working on them). Titus got shamblers right away and kept them well, I focused mainly on healing Titus, Osi did Titus and party. Osi got aggro of Baba near the end and kept it. Baba was killing the party members before this. Completion time: 79 minutes, 56 seconds. Deaths: 81. Loot: 125 Hut runes, 24 Threads of fate, Tremor, the Breaker of Bones, Gulthias Staff, Volley, Arbalest of the Damned, The Invisible Cloak of Strahd, and Dusk, the Light Descends. 2. Killing Time LH
Arakasii was low on time and wanted us to do Killing Time before Strahd, so we did that one after Baba’s. Dragon tank: Titusovid, Shadow kiter: Osiride. Osi was kiting the shadows near the stairs in rift 2, I died while commenting (typing) on it. I also got flattened by LoB in the third rift. Good trash killing this time and fewer deaths. Completion time: 43 minutes 45 seconds. Loot: 84 Time runes, 24 threads of fate, 3 schisms, Timeshard, Clouded Dreams, Brilliant Crescent, and Mail of the Mroranon. 3. The Curse of Strahd R1
Arakasii left and I wrote in EEraids channel that we had a free spot for Strahd. I got a tell right away from Rakoon and I reserved the spot while he switched character. Tank: TitusOvid, trinkets: Thazara, Osiride. I was ready and paying attention this time, I think we only lost people from grip during doors. A few deaths on the stairs, but not due to grip. Heart fight fast and somewhat easy. Lhasa our d-door. Doors quick, I ran to 2.1 to get the last card since person there had died. End fight: Titus on Strahd, Osiride brides. A bride died just as we were killing Strahd, I called stop and party reacted. Bride reprepped and we completed in the first try. Completion time: 36 minutes, 2 seconds. Loot: 125 Strahd runes, 26 threads of fate, A +8 upgrade tome of dex, Nocturne, the Song of Night, Coat of Van Richten x2, The Masque, Hands of the Dawn Healer, and Echo of the Sunsword. 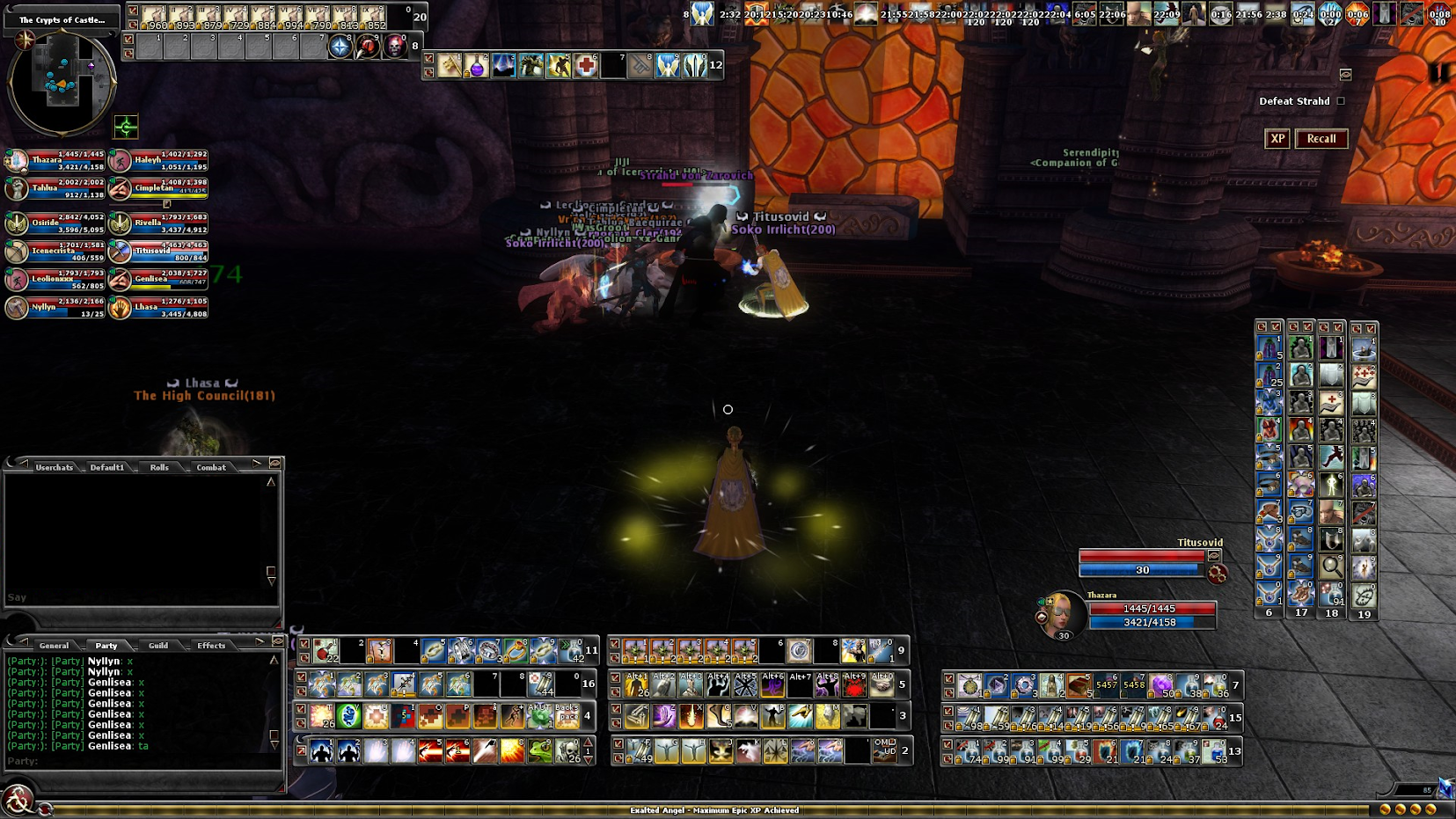 4. Riding the Storm Out LH
This is not a popular raid, so again we lost about half the party when I wanted to post for it. We filled without too much waiting though. Party knew the raid well enough and we worked together to progress the raid. I took the north route, some went west. We gathered at the shrine before heading to the end fight. Completion time: 31 minutes, 50 seconds. Loot: 84 Kor kaza runes, 21 threads of fate, Acidic Insignia, and Gauntlets of the Aggressor. 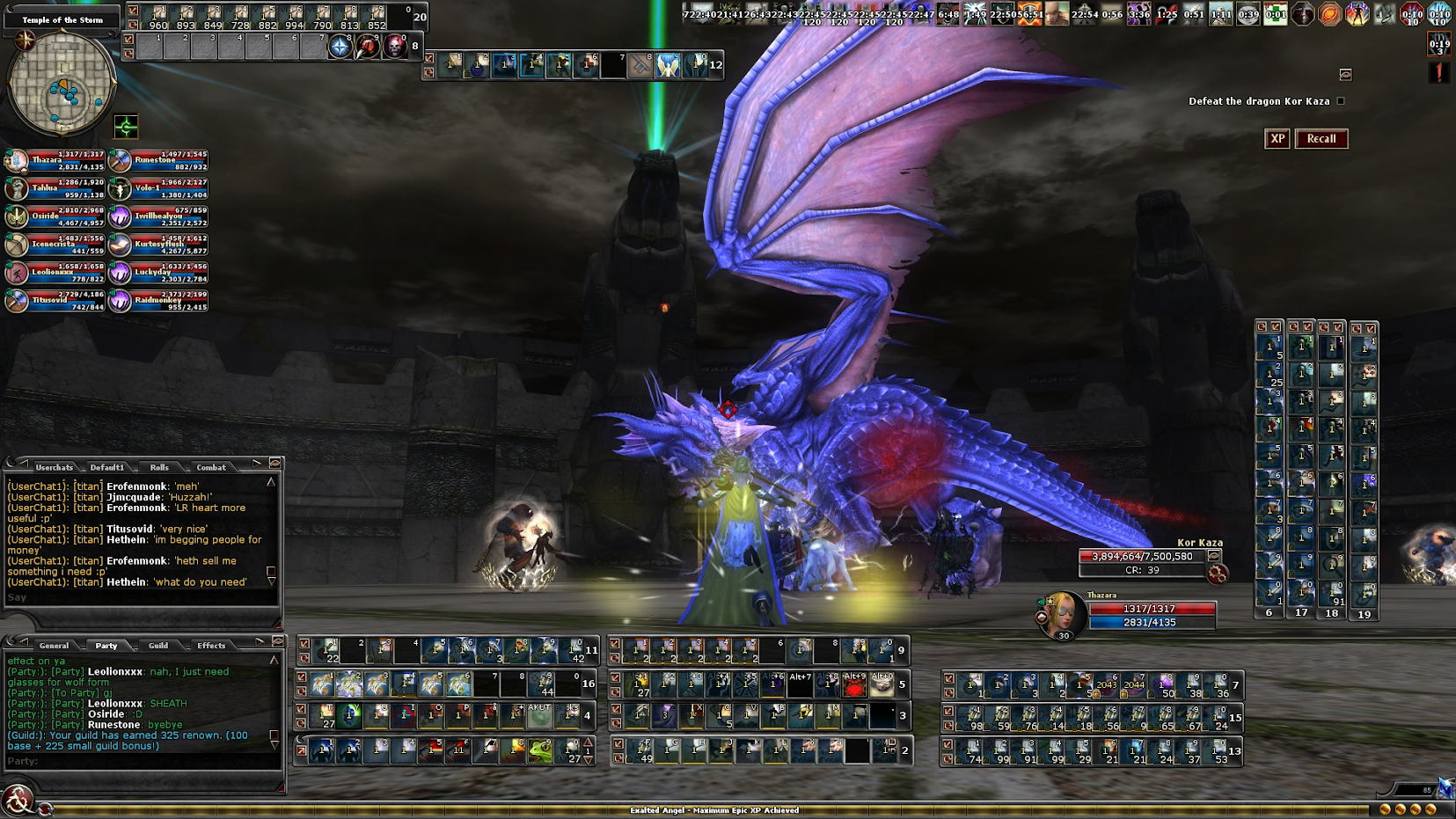 6a. Legendary Hound of Xoriat LE – failure
Someone wanted HoX and I posted for it. Elite was suggested, but as it’s been my experience that elite has a high failure rate, I suggested we do one try elite and if it fails rerun on hard. Elite was going ok, but then the big beholders spawned and even though I want to give the group points for effort, eventually we forfeited. 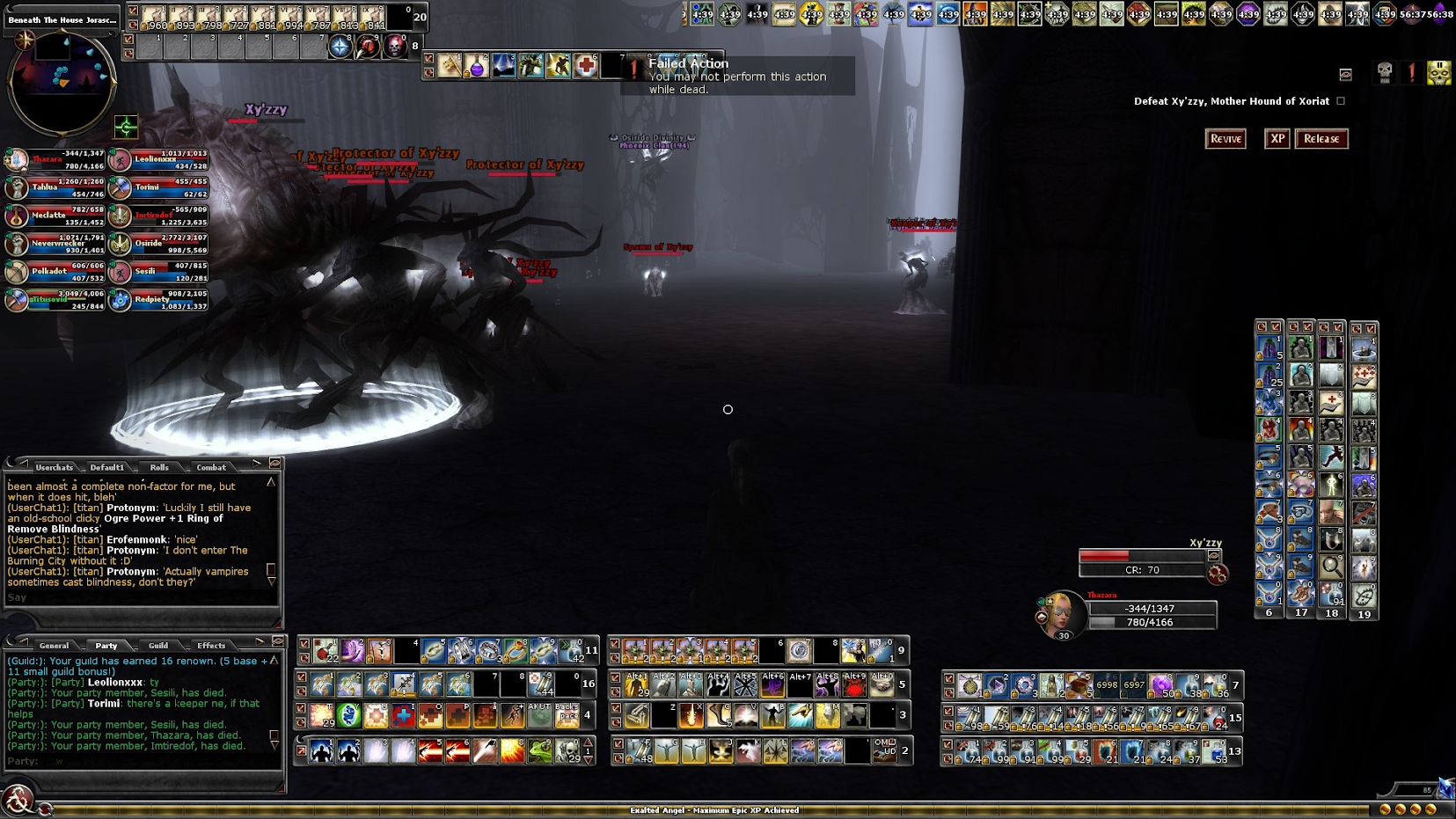 After HoX I was done for the night.
That’s all for raids 116.
Thank you for stopping by.