Last Saturday I logged into ddo during the day for a few runs on Maidae and was asked by two people when the raids are. Due to time zones and daylight saving, knowing when things are can be a bit confusing, as I noticed since both of them guessed an hour off, first person an hour early and second an hour late. 🙂 When I did log on for raids, the group filled in about 10 minutes and I had a couple of people interested in joining, but sadly we were out of room. During babas, especially in the first fight I seem to attract the aggro of the hut, pretty much every time. Usually aggro switches after a while and it starts chasing someone else, but this time I felt like I spent the whole fight lying down. I asked the party to split up for the puzzles and not to have all clerics and all warlocks on the same size. This to hopefully even out the dps a little. Note, I expect both clerics and warlocks to be good at killing trash and the totems and by not having them all on the same side the dps will be more even. One person ends up leaving half way through the raid and we continue 11 man. During end fight I get aggro by a shambler and die, I don’t remember what the second death in the quest report was. We finished in 28 minutes and Suffering, the Half of Whole dropped. On to Strahd. Since we were one person short I had a spot open for the next raid. Vilkar asked in channel for me to save him a spot while we were running Baba’s. Since I do a first come first served and count reservations equal to having clicked the lfm, I gave him the free spot. Some of the party members switched characters but everyone except the person who left during stayed from the baba’s group. I felt we had a good group and the raid progressed nicely. One little detail Iv’e noticed about this raid, ever time we step through the door to do the stairs, one person gets gripped just inside the door. This time I was in fact waiting for it, but since I couldn’t tell who it was until they died (most of us entered at the same time, so we stood in a pile), they got a raise instead of removal of grip. Doors completed somewhat quickly, I died again there, this time because I got aggro of a shadow. The raid completed in 24 minutes, and I don’t think any named item dropped. At the start of raid night I was told that Kv wanted an RSO run, so I had promised to post for it after my 3 default raids: baba’s, strahd and TS. Kv had asked me to reserve him a spot for RSO, but decided to join for TS, which automatically gave him a spot for the next raid (people who are in party automatically have a spot for the next raid). I’ve started to remember at least a few people who can do the str for TS (it’s not that many characters on the server that can hit the 75 required), of which Deviltoy is one of them. I asked if he was planning to stay for TS, and since he sid yes, I just opened up the free spots to anyone. The intelligence of 50 is easier to get, most wizards, rogues and arties will have that or more, and many other characters can reach it with buffs. We had a good and quick run, the party worked efficiently, we waited a bit for most to catch up inside the front door and outside the short cut, as well as before starting the end fight, but other than that we moved forward and killed mobs.  The raid finished in 18 minutes and some named items dropped as they always do. 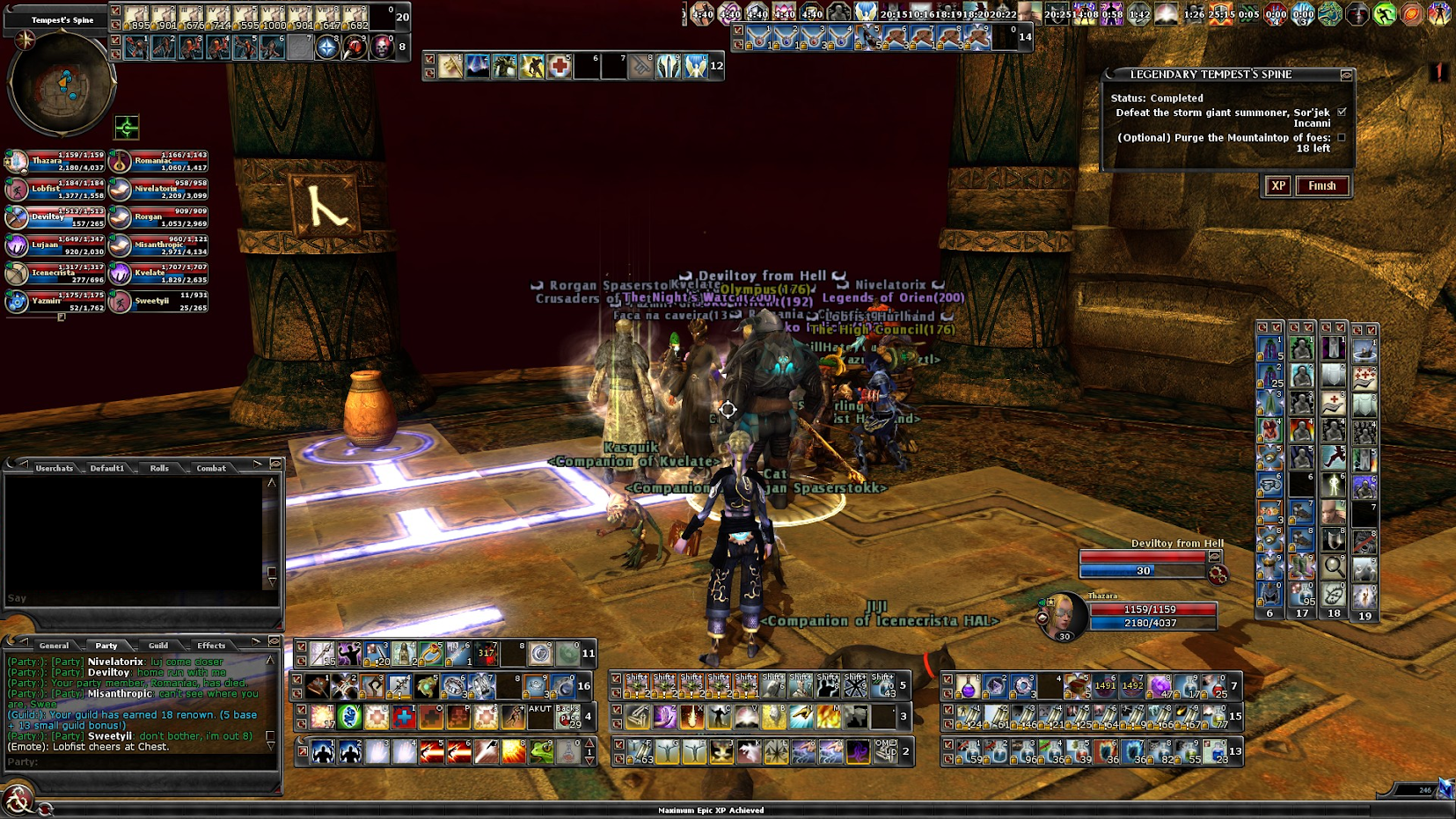 RSO has since it’s release been slow filling, and since the release of Ravenloft it’s been really hard to fill, or even hard to get enough people for. I was hoping to at least attempt an LE run at some point, but right now that seems impossible. 6 party members from the TS run stayed on and two more joined the lfm. I decided that 9 was a large enough number for a short man run, especially since we did have a few that knows the raid well enough. Devil was assigned tanking job, Kv, Lob and I believe Mis were doing puzzles. There were some deaths like there always is, but the group stayed somewhat well together, mobs were dying and puzzles being completed. The dragon fight was actually really smooth with very few deaths. We completed in 39 minutes and Guided Sight dropped. Since the planned raids were completed, I asked the party what they wanted to run. Shroud was suggested, and I posted for it. It took about 25 minutes before we were ready to start, which felt slower than it usually is. Someone had an lfm up for heroic shroud and sent me a tell about it. I assumed based on their lfm that they were new or that maybe it was their first time posting for shroud. After thinking about it I sent them a tell that I could come help them on my monkcher if they haven’t gotten a party by the time we’re done with Legendary shroud. The shroud run was quick and easy and well, boring as usually. After the run I asked if anyone else in party wanted to come help me with the heroic run. My initial plan was to show Maidae off, but then I realised that for shards it would be better to do a proper run. 3 people from the legendary run decided to join, but as we got to the last part and the party leader decided not to complete so he could try again at getting the great shard of power, two of the members had had enough. The three of us left in party stayed on til part 3 where the shards drop but after the one attempt I hd had enough of it. It was late and I had only promised to do one run, not stay on for farming. That’s all for raids 68.
Thank you for stopping by and see you in the next raids if you join.
Take care.