Hello boys and girls and warforged. 🙂

In Finland if you have a permanent position at a company, and you have been working for more than 1 year, you are entitled to 4 weeks of summer vacation, that you can either split up, or use all in one go. I prefer to stay away from work for 4 weeks in one go, to get a proper break from all the stress and daily routines. My vacation started July 1, and I will back at work again July 29. It’s been sunny and warm in Finland, and I’ve been trying to work on my tan a bit. 🙂

Even after 1.5 weeks of vacation, I still haven’t gotten all the things done that I had on my list. I still need to do some shopping and cleaning, and I haven’t been to the gym at all. I’ve seen my friends some, and I’ve been cycling a bit. Time flies. I have, though, been playing ddo until morning, almost every night. 🙂

I finally capped all ED’s on Thazara on Monday, I think it was, and I have almost every night run some epic elites on her, after the normal evening stuff with raids and levelling my lower level toons. I am getting better at doing tree. The first thing I entered after getting primal avatar epic moment some weeks ago, was ee pop. I’ll tell you, I died, died and died some more. I have not yet learned how to not die at all, but I am getting better at doing damage and toggling tree form off when I need more heals than the aura provides. The mobs in the hallways in ee pop are easy for me, while the orcs with their big swords in cabal are a challenge if I get more than 2 on me. Red names, especially reds that whack at you with a melee weapon, are also a challenge, as depending on how often they hit, I may not be fast enough to get out of the way, toggle tree off, target myself and heal before I’m dead.

I am also working on tanking the storm reaver in eh fot. I have done it 5 times so far, 2 times without dying. My problem is that when my pale lavender runs out, I can’t melee him any more without dying. Someone recommended only putting on plis for boom, since most of the other stuff he throws at you are reflex save. I think I’m gonna try that next time. I am having a lot of fun running stuff in tree form, and I do pull aggro. There are few others that can pull aggro off me when I’m tree’ing. I have met only a couple.

Anywho. Thazara met the red dragon Zoarinnia for the first time the other day. 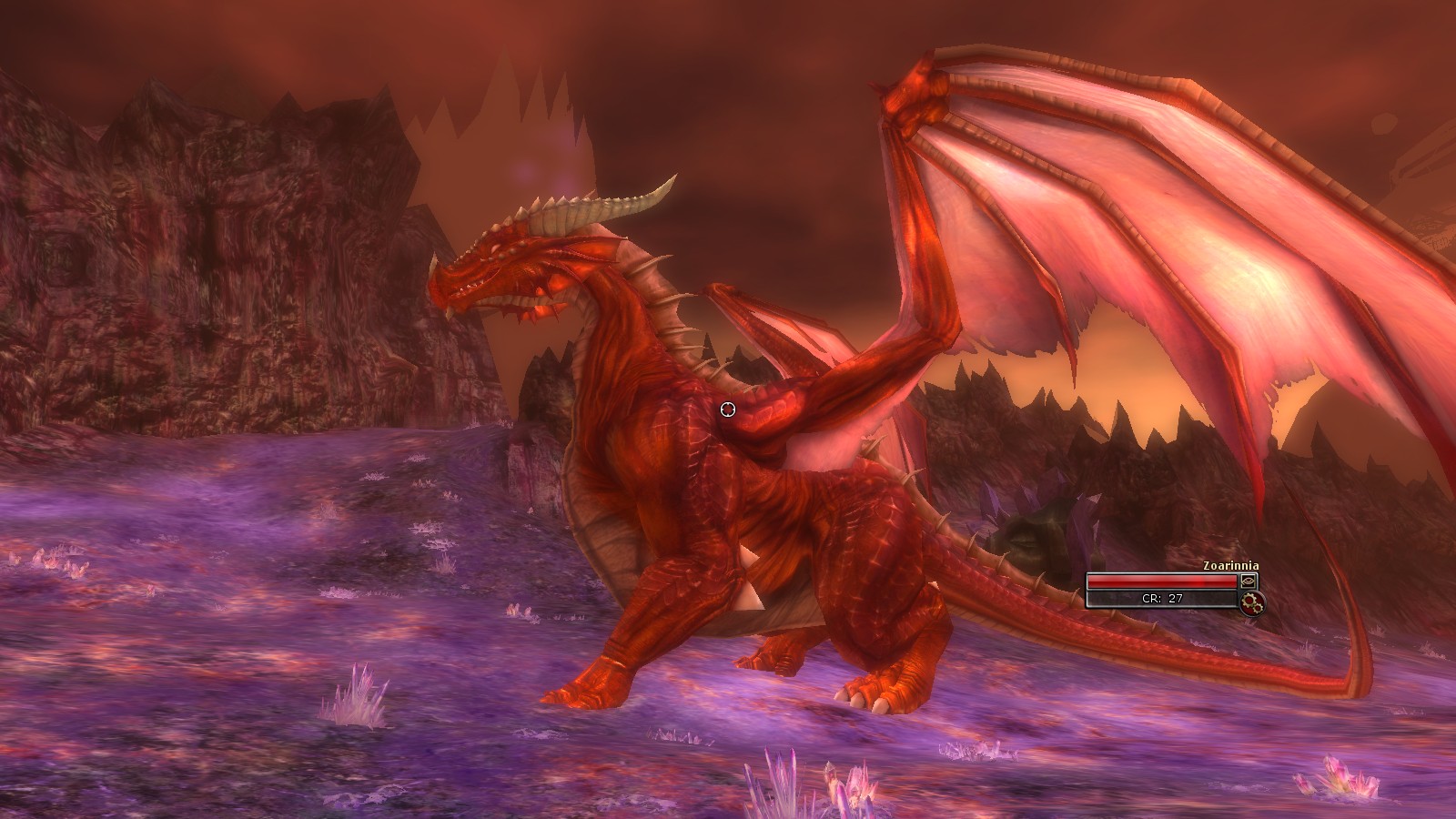 And yesterday I decided to try and solo eh Crucible on Thazara. I know crucible well, and it is one of my favourite quests in gianthold. Thazara does not carry any cure potions, so I was usure how I’d manage the swim. Her saves are up in the 40’s, though, so I didn’t think the swim would be too difficult. I spent the most time in the maze, making sure the path forward was open before I picked up the horn. Horn of agility I messed up twice, since I always get stressed and nervous there, but no problem. Horn of instinct I guessed right on 2nd try (not a chance that I could get Thaz’s wisdom low enough to not guess), and the swim was very easy. I just swam quickly through, so my aura was healing me the whole time, and the spikes hit me for ~20 points of damage, so wasn’t an issue at all. I ran out of ship buffs just before the end fight, but no problem and end fight was easy. I did have a hireling with me, just to use the valves in the maze, and he was being a bit stupid, running off even when in passive mode. But yeah, on a whole a smooth run. 59 min total, since I also fell down in the maze once. 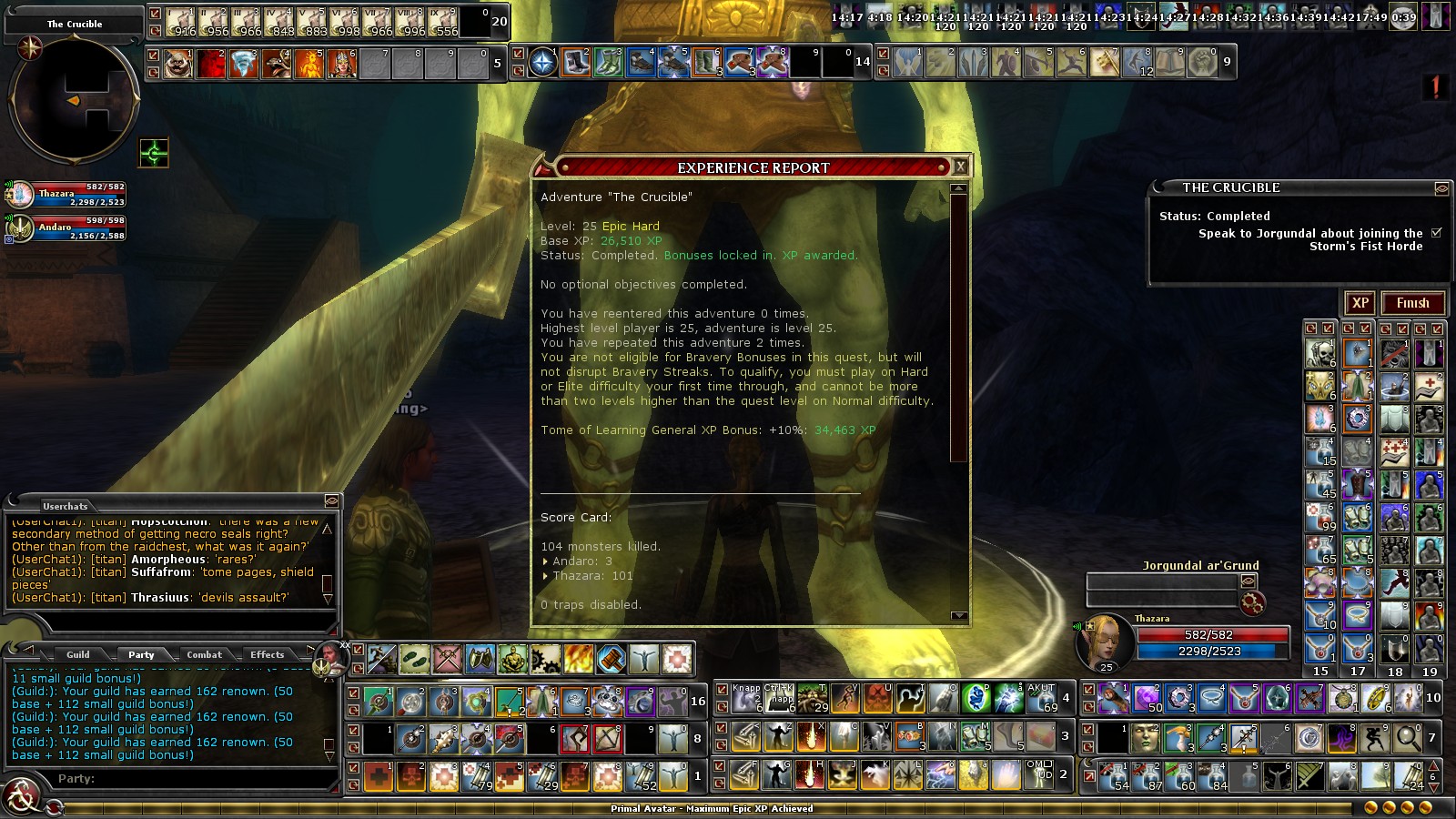 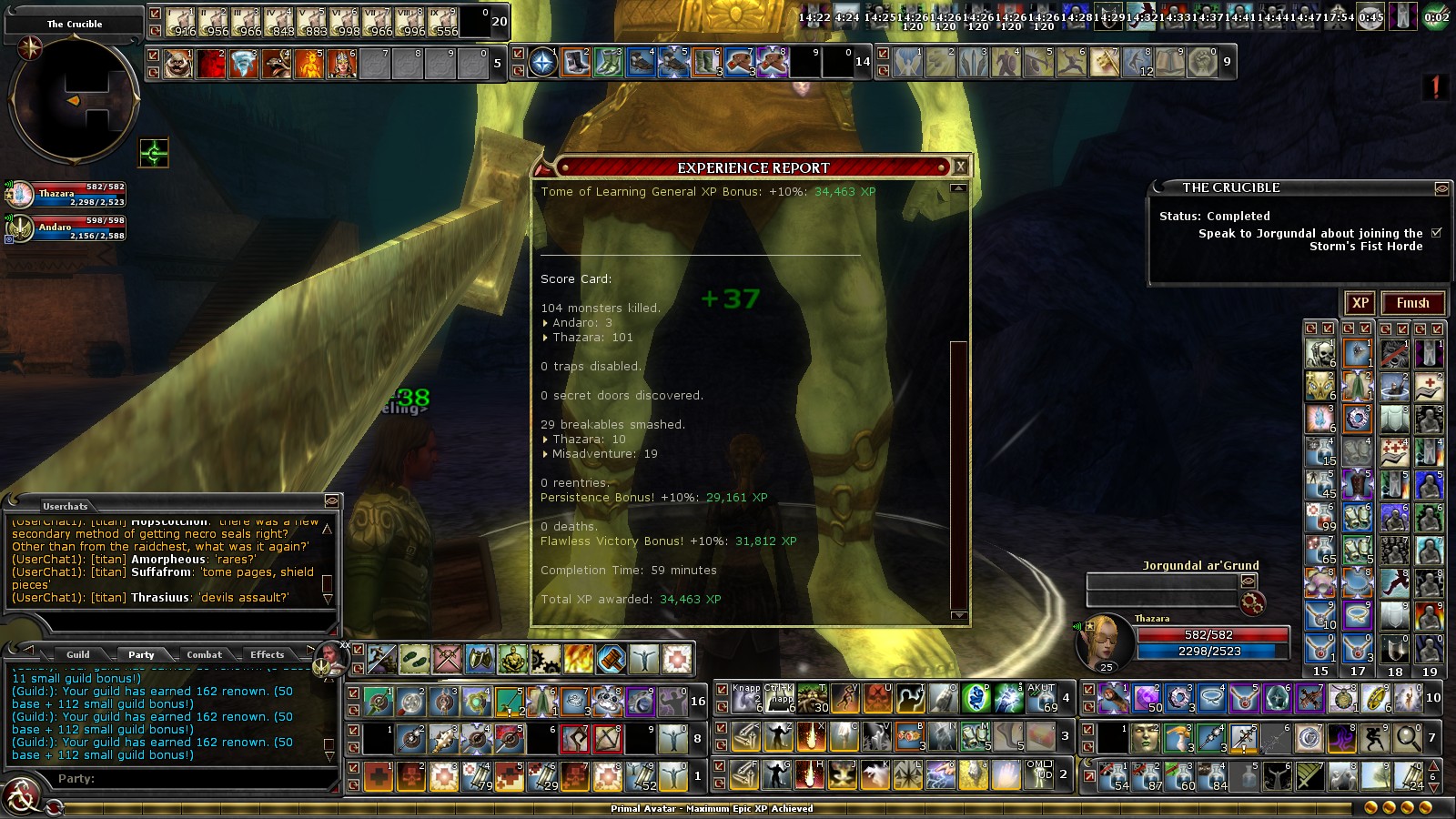 That’s a quick update from me, now back to what I was doing…

Tc and see you on twitter or in game. 🙂 Cheers.