I have been skipping my friday runs on Cannith for irl stuff a few times lately, so this friday I skipped a party for DDO 🙂 On Cannith, we have a static group, we used to be 5 and now we’re down to 3: clonk (me), rogue and druid. This friday we ran some Necro 4 (again) to get the last pieces for the sigil, one run of Litany, took lvl 18 and started running the Web of Chaos chain. 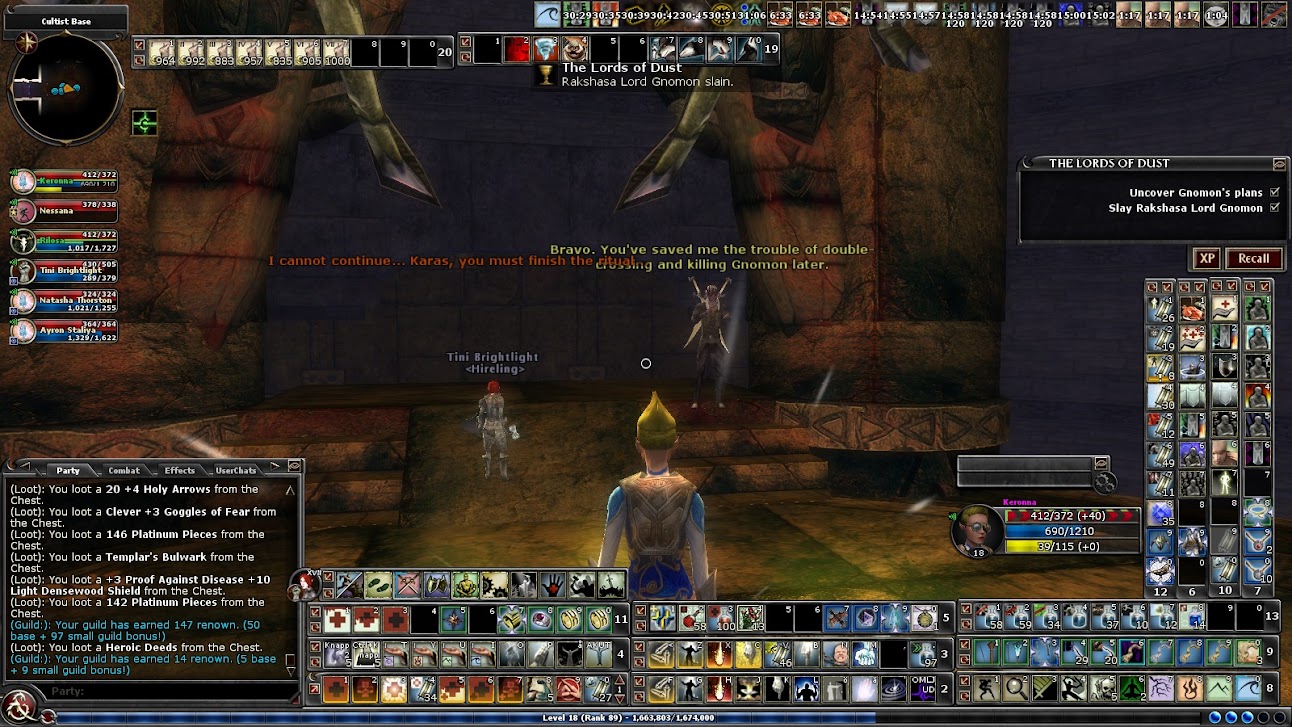 Keronna in Lords of Dust. Was a very good run.

Saturday, after swim practice and other stuff, I logged on to DDO at 8pm and lfm’d for ADQ. Zoolo and some others joined me. After a failed hard short man raid, and the loss of one party member, we just ran it on normal. After, I lfm’d for CitW, and Zoolo stayed on.  Ppl hit the lfm rather slowly, then suddenly we filled and off we go. I will talk ppl through, if they let me know they haven’t run it. I believe I had one guy who hadn’t run it before, so I kept talking, lol. Only a few ppl got kicked off in the leg fight, and only 1-2 fell off after that, which to me is a good run. We had some deaths, dps was a bit low, but ppl were communicating and listening to instructions, so the run was over all very smooth. In the end fight, I always want to not prep anything, but kill everything but the necro, then kill then necro. That way, u don’t have to worry about timing, or ppl killing too soon. Only works if ppl listen, and do what they’re told, though. 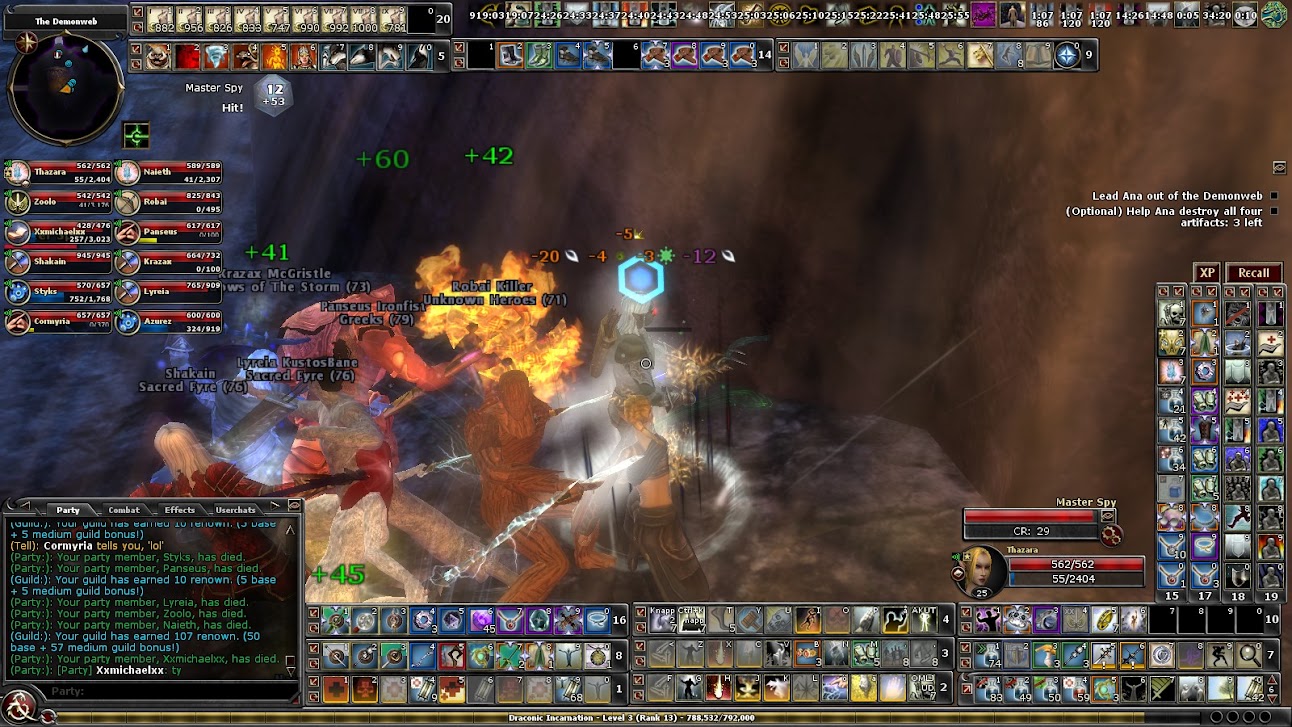 I had 45 min before I was supposed to switch to my druid, so decided I’d try to get a FoT party going. Cleazy had just logged and joined me. I got ppl, but no Reaver tank. We ended up waiting a good while for the Reaver tank, then finally got one, only to have one guy dc and then as we’re about to start our TO tank dc’d. Restart. Again, for the most part ppl were doing a good job, except I forgot to assign a TO tank healer. I usually do that (TO tank healing), but assumed Cleazy would, so didn’t pay attention. Then he tells me I told him that he was Reaver tank healer. Oops. (TO tank died because no one was healing him). And then when it was time to prep Reaver and TO, I wanted TO well prepped, but that was a bad idea. Twice he died before any kill order had been given. And both times the Reaver team tried to kill him fast enough to catch it (bad idea). We should have just let the TO reset (he resets to about 20%), and prepped the Reaver. 3rd try I was getting very frustrated, ready to leave. I had used several pots and I forgot to buy more mass cure scrolls. 3rd time we prepped the Reaver only, then killed them both. and success finally. I wanted the named morningstar (Braisingstar) and the boots, got the morningstar as no one wanted it (Thaz didn’t have a good bludgeoning weapon for skellies). 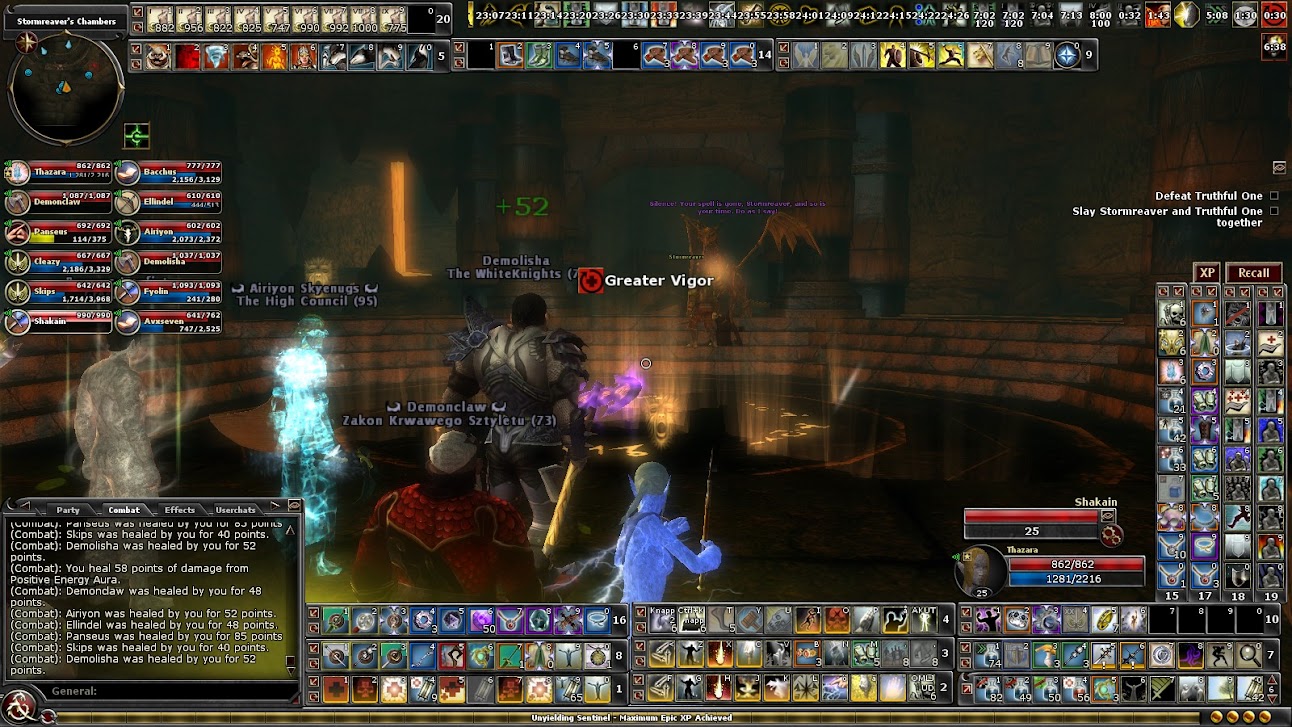 Thazara waiting for the Truthful One to stop talking in FoT. 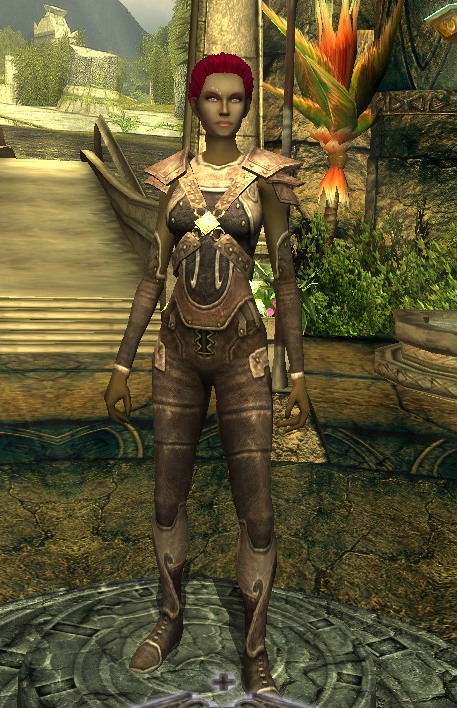 Jarvanna’s new look after she switched to the cove leathers lvl 12 tier 2, and I coloured her hair again.

Switch to my druid to run with my sister and Kudesnik, and Cleazy joined on his TR’d wizard. We ran the mines in sands elite, then Tempest spine. I’ve only run Tempest spine 2 times before, and that was when Thaz was lvl 10-12, which was 2011. Shindurza joined us as we were ip running the mines and stayed for the raid (I had told him we’d be running, so I believe that’s why he showed).  All 3 (Kudesnik, Cleazy and Shin) know  TS really well, so I wasn’t worried. I lfm’d, and quickly got ppl, left last spot open for a healer. Both me and sis’s druids run in wolf form, and except for me casting mass vigor once in a while, we don’t really heal ppl. Run was a bit messy and confusing, but ppl in the group were nice and helpful 🙂

Back to Thaz, I wanted to run ToD, had the lfm up for  good while, but no joiners. So I asked Cleazy to put up a VON, we ran that and then I tried again. Still no joiners. I was contemplating taking it down when I got the first joiner, then one more, then Geria and her husband, and slowly we filled. 🙂 Except for some minor hiccups, run was very smooth.

On Sunday we had planned to flag for CitW with Grim, and I asked Cleazy if he wanted to run too. I lfm’d, we got some ppl, and ran the quests including the optionals. I think we had a few deaths in the first chain, while the second was very smooth. After the second chain I was tired and decided I’d run the last chain some other time. 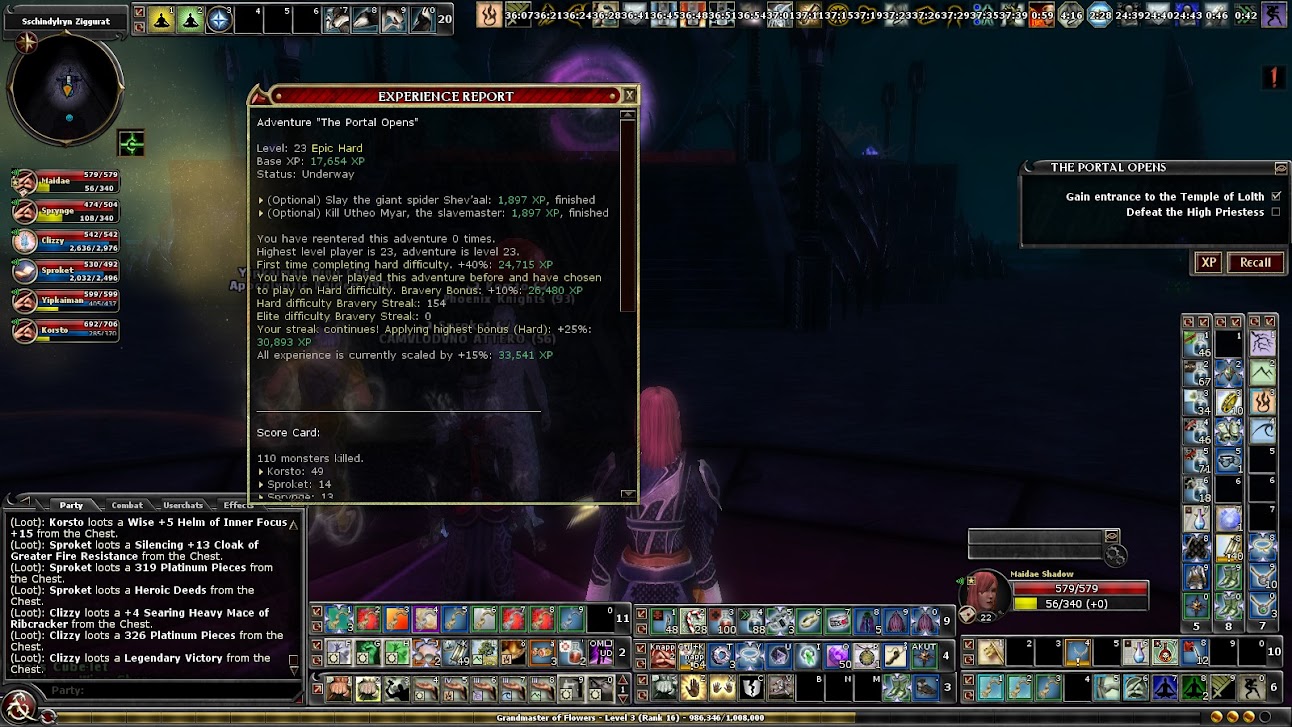 Maidae waiting for the end fight in The Portal Opens to start, checking her streak; hard: 154. 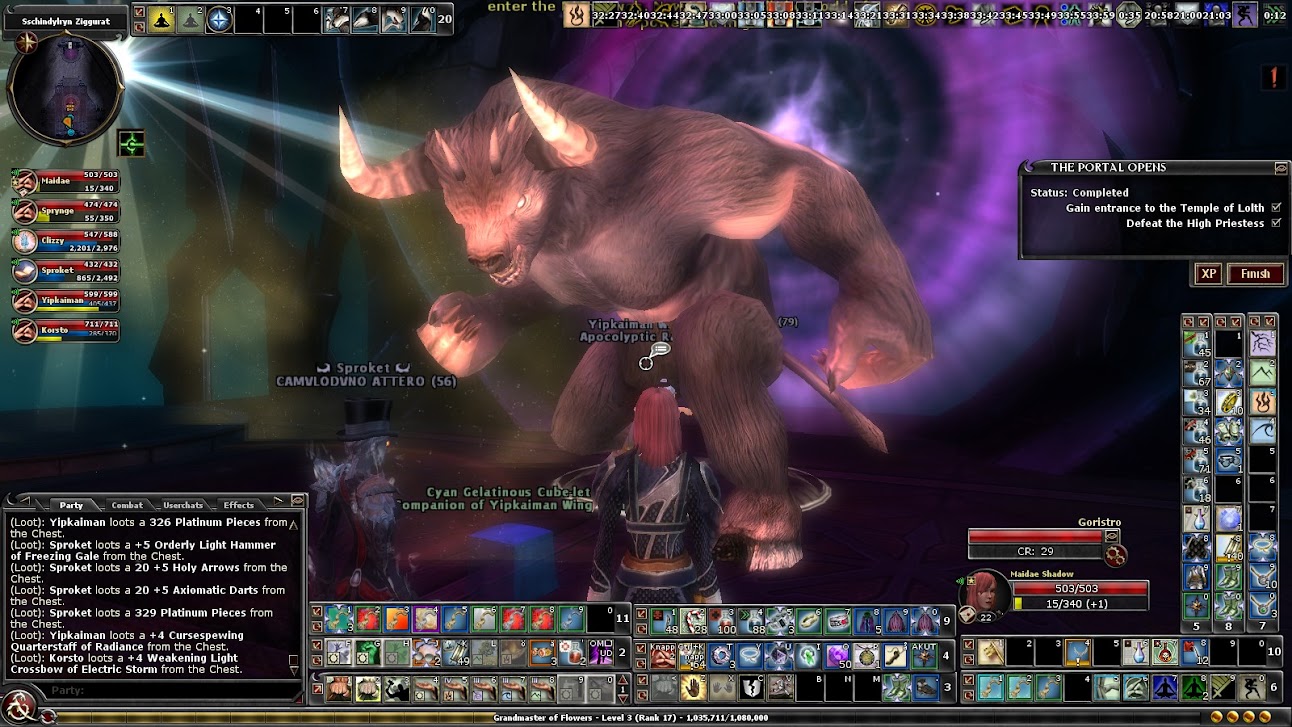 Maidae checking out the big dude in the Portal Opens after completion.

That’s all I have for you for this time. 🙂  Thank you for reading and have a wonderful week.

5 comments on “This weekend in DDO”