I went out on Friday night for the first time in a long while, slept in on Saturday and then had a bunch of chores I wanted to do before logging on to ddo. So, I didn’t log on til 10pm. I saw Supergimp on an lfm for ee FoT, sent him a tell that I was considering it, no reply, so lfm’d for CitW Normal. I barely got it up before Super sent me a tell asking me to join him instead, and when Demonnibler joined me I asked if he wanted to go join Super instead.

First try, we enter with a full group and plan was to follow the same tactics as on normal or hard. Things got messy and the dragons killed us, one by one. Divine intervention saved me, but as everyone else was dead, I didn’t last long after getting up. 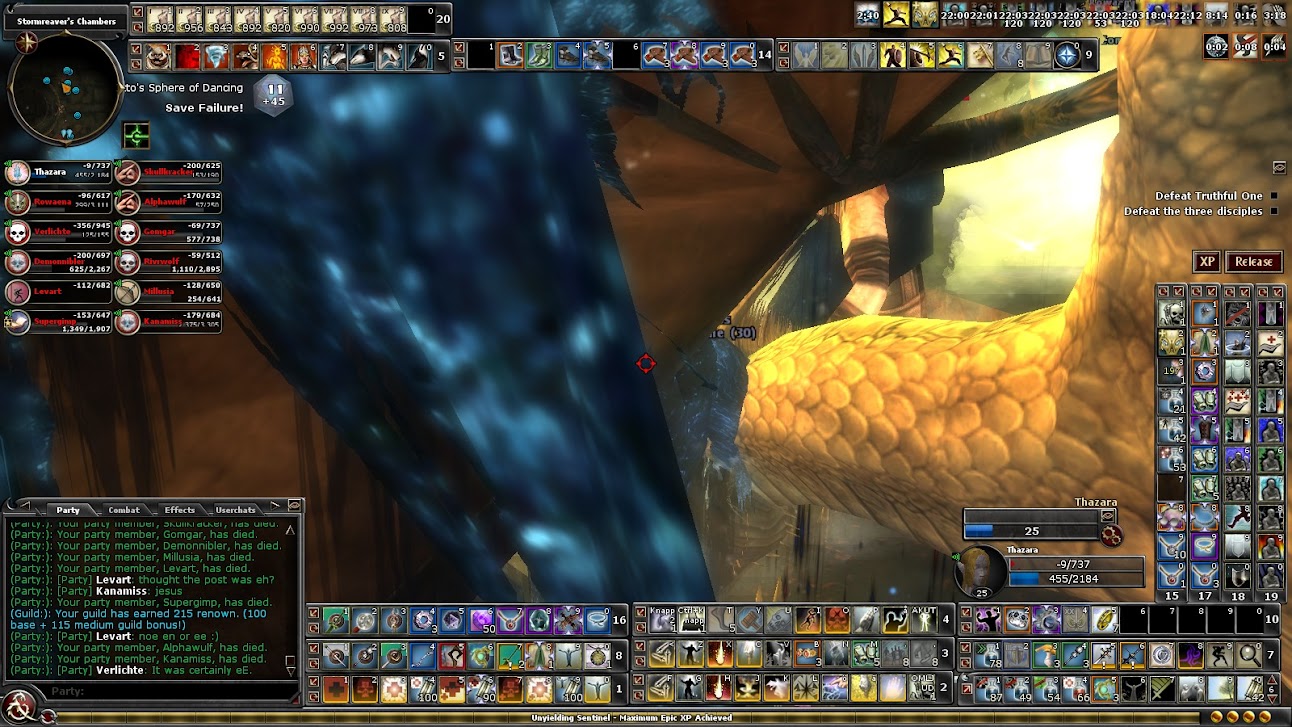 Second try, new tactics. Millusia told us that the ee tactics he knows of, is to take all the dragons to the Stormreaver while we prep the giants, so we decided to try that. As we fell down in sneak mode by the wall, Super stayed in middle to grab aggro and pull the dragons to the Stormreaver. This tactic worked better, but lag tore us apart. We hit such bad lag after the first pair was killed, that we couldn’t do anything. I was trying my best to survive, but after I got one of the giants beating on me, I didn’t last long. I was the second last to go down, though, before River. 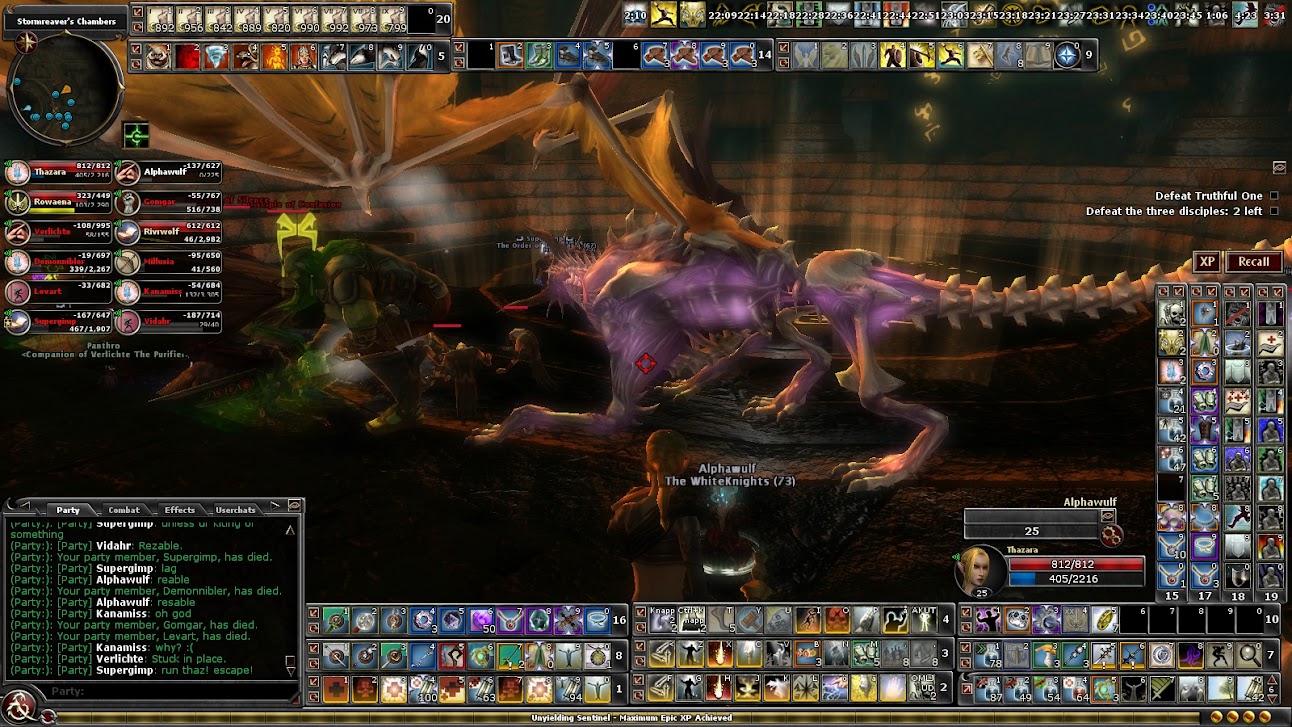 I had made plans to run with some ppl, so I switched toons after this, ran with them about 2.5 h, then switched back to Thaz and lfm’d for CitW normal. I got 2 trees in the group so I suggested we do hard instead. Was a very smooth run with only a few deaths and in the last area we got it so the only portal keeper was the necro. Ana got through on first try. Only one item dropped, though and only a few comms. I got nothing.

I saw Super lfm’ing for ee FoT again, and joined him again. He only let in ppl he knows, or ppl who ppl in the group could vouch for. He also spent a long time talking through tactics, too long apparently as some ppl had to leave. In the end we entered 11 man. Same tactics as before, take dragons to Reaver and prep the giants. We had some deaths, but we got the 3 pars down and the crystal. After that came the difficult part. We had a good enough group, but lag’s a killer. I was trying to keep ppl alive, but would freeze up for a second or two very so often. I was using divine intervention again, and it saved me once from dropping from lag. Super who was tanking the Reaver died, and his backup got him back up while keeping the Reaver from running off. Then ppl started dying and Reaver was off.

I was running in Unyielding Sentinel, I had energy sheath electricity from Draconic and the electricity resist from GMoF twisted in, and an e normal ring of djinn, I was doing good against the electricity. But as ppl started dropping, and with the 2 minute death timer, we were in trouble when ppl started dying. I was kiting trash while trying to get ppl back up. I threw one guy a raise 4 times before I finally got him up, and the whole time I was lagging on and off while getting hit in the back by trash. As I went down I thought we had wiped, but the fvs was still standing (he must have been incapasitated or just at little hp, because I didn’t notice him at first). But as last man standing he didn’t last long and it was a wipe. 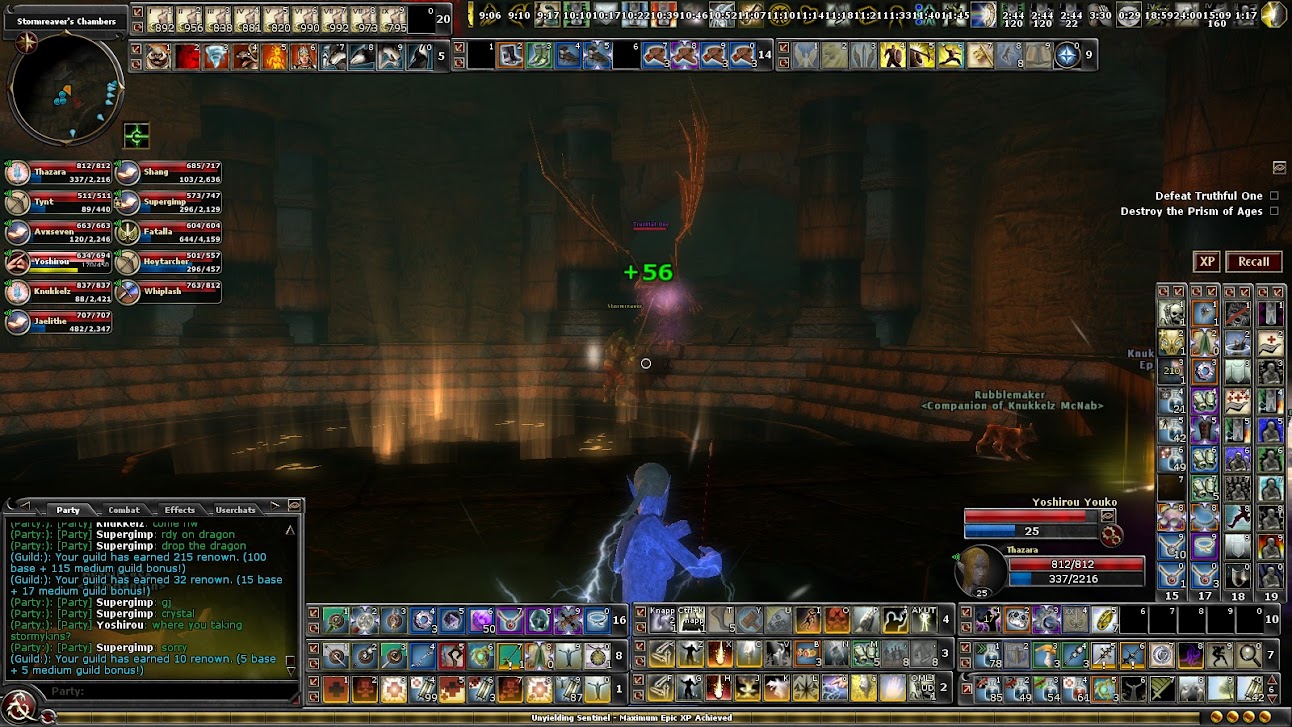 I’d say the biggest issue we had, was the constant on and off lag. If we could have had a lag free run, we would have pulled it off.

Thank you for reading and have a wonderful day/ week.