I went to bed just after 4am Sunday morning, and slept til 1pm. Had a good sleep. Logged into DDO quite soon after getting up, to see if Cleazy was on. He was, but he joined a Caught in the Web group soon after I logged and the leader didn’t want any more healers. Or at least that’s the impression I got when I sent him a tell, so didn’t bother to hit the lfm. Also they had already started and I get lost.

Shroud (hard)
I lfm’d for a hard shroud on Cerge and we filled somewhat quickly. Andy joined on one of his toon and complained that I hadn’t invited him. lol. Like I have any idea when he’s on timer and not? Guy’s got so many toons, I don’t even know which are flagged for what. Anywho. I decide I want to do a quick run this time. We’re doing well and I help with a few puzzles. We don’t save a devil in phase 4 and it’s all good. But when I decide to rush in phase 5, we’re in trouble. Maybe I should have read the situation better, realised that party wasn’t strong enough for it?

Anywho, dps is low, Harry doesn’t stay put and casters & healers run out of mana. Jedli (who I asked to join as second healer) and the arti are the last ones standing, and have to duo Harry for his last 10% or so. But they do it well and I ask them to hit the altar. We raise at the raise shrine and I decide to rest for the first time ever after completion, lol. 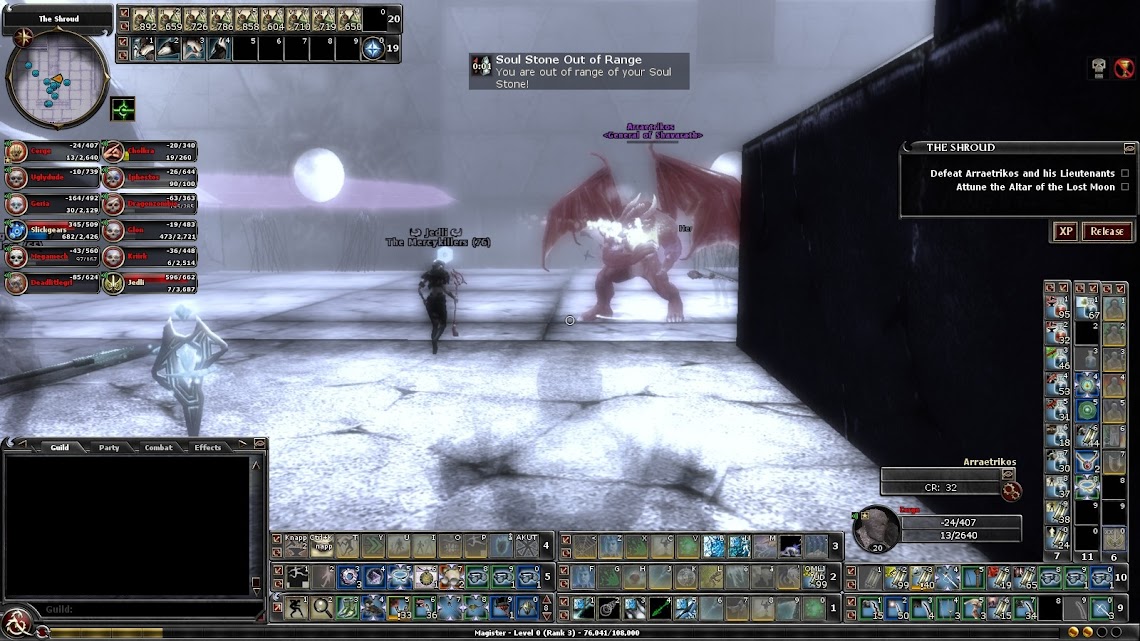 eVON (N+H)
I log on Thaz, chat with Cleazy in guild chat and he puts up a VON. I switch back to Cerge to do his first eVON. I tell the party that I’m prolly gonna suck badly, since Cerge’s spell DC really isn’t up for the task for epics. I figured sorc capstone would be awesome, but it’s kinda meh in lvl 22 quests. At least he self heals, self buffs, can haste melees and DoT the bosses. That’s about what he’s good for. lol

We don’t get a trapper, so I’m kind of running through the traps, but they don’t hit for that much so it’s ok. Cerge gets some nice XP from VON5 and his ED almost to lvl 1. Enter VON6, we buff, head to prep the djinni, when I DC. I get back and everything’s weird. I feel like not only is voice chat delayed (Cleazy’s talking but it’s all delayed), and I’m not even sure if what I’m seing is real time or delayed. We run in, I haste the melees and DoT a bit, while hiding from fire. We finish without problems and I roll on two items, Dragon’s Eye Kundarak Delving Boots, win the roll on the eye and get the boots since no one else wanted them.

CitW (Normal)
After VON I switch back to Thaz and I see the same guys as earlier running Caught in the web again. Cleazy joins on his monk and me on Thaz (my only toon that’s flagged anyway). Run is ok except I manage to get pushed off twice by Lolth’s legs and die and later on ppl aren’t listening to the leader, but kill things they aren’t supposed to, so he gets a bit snippy and tells everyone but his two buddies too pike at the portal. Two of them die and then the leader is calling for heals (third guy was an fvs so he was prolly telling him). I reply “Well, I’m piking at the portal, so I’m not healing anyone”. Prior to this I was tailing the barb (who was one of them), since I know how squishy they are (well, my 400hp sorc has better survivability that several 1000hp barbs).

We get a bunch of chests after the raid is done, but I don’t get any named loot, no tome and no commendations. So kind of moot. No good end reward either. 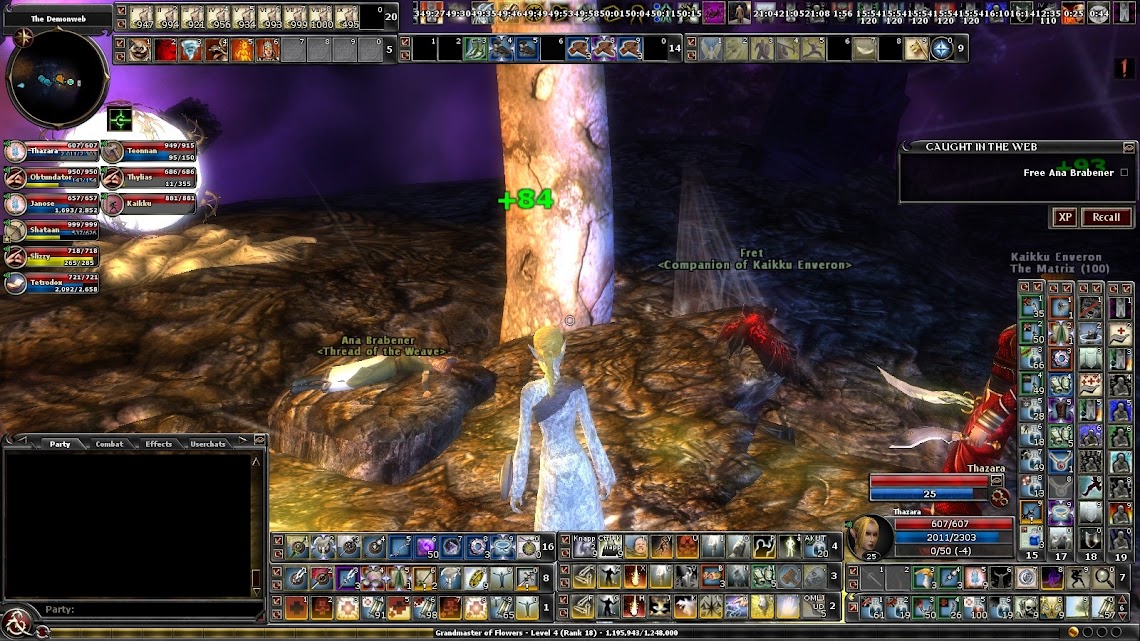 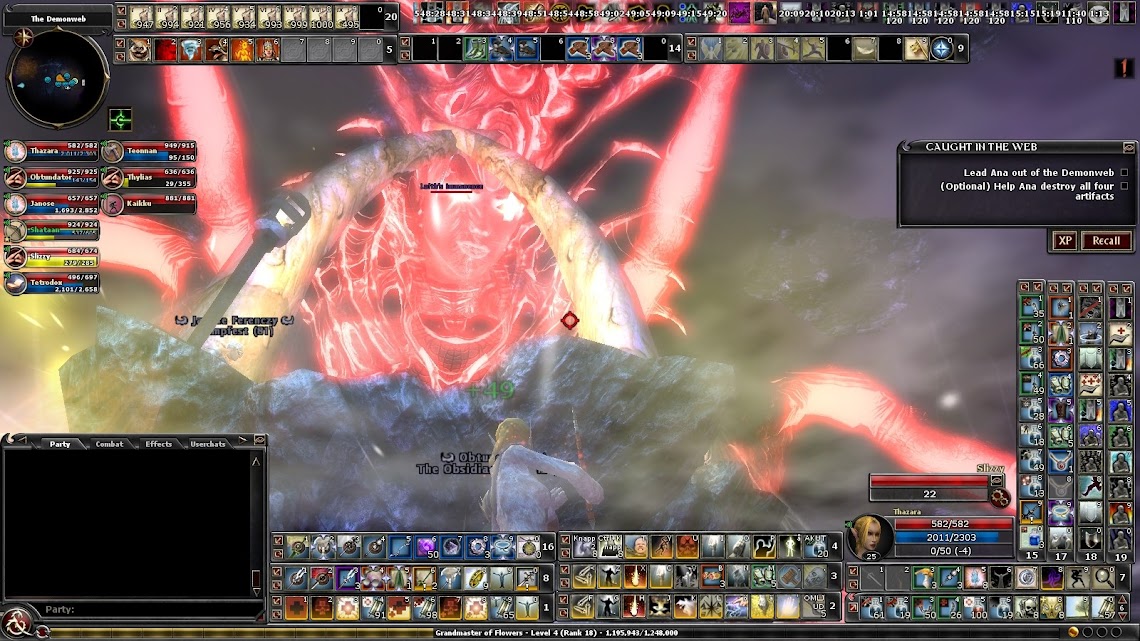 A little bit of farming
I follow Cleazy to farm Deal and the demon first chest on EE. He complains a bit about me being slow, lol. He’s on his monk so of course he’s much faster than Thaz is, even with striding and haste. 🙂 We run that a few times, and the only good thing I get is a few commendations. I have a bunch of them by now, might see if there’s anything I’d still like for Thaz.

Abbot (hard)
I see an lfm for Abbot, same guys as in CitW and I suggest to Cleazy that we join. I hit the lfm, then decide to switch to US ED (was in GMoF). My net is running a bit slow, so when I press “make active”, I start to lag like crazy. I can’t even see that Cleazy and Jedli has joined in the last spots and I tell the party that I’m sort of stuck, that give me a few. Takes too long for it to get sorted, so when it finally does, they’ve already started. I’m told I can pike at entrance for completion (Abbot locks everyone out who hasn’t run across the bridge after someone crosses a sertain line). I run there and enter, and sit by a blue/purple barrier, spotting the Abbot from afar. I’m pretty disappointed and almost feel like passing on the completion since I didn’t get to run. But I figure, it’s still better than nothing. And at least I get the end reward. Nothing good though. 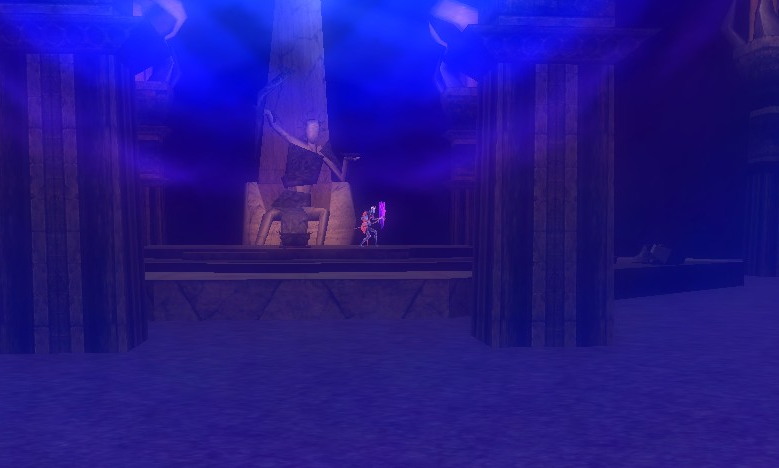 After Abbot I told Cleazy to give me a few gs mats so I could finish Thaz’s MinII scimitar. 🙂 Yes, I told him, didn’t ask. haha. Well, he said he wanted to help, so there. 🙂 I then just spent a while talking to him before I had to log off and he had to go to bed.

That’s all of my stories for this week. Thank you for reading and see you around.