On Saturday I had planned to go to a potluck, but stomach was a bit crampy and then I get a message that it’s been cancelled due to one of the hosts being sick. Later on they decide to move it to another person’s place, but I had already decided not to go. I spend most of the day doing household chores, rather slowly since I’m not feeling 100%. I log on to DDO around 7pm.

eADQ round 1 (Normal)
Again Cleazy happend to be on when I logged, so talked to him for a while, and after he went to bed I got to running raids. The first thing I wanted to do was to run my first eADQ on Cerge. Andy joined on his two epic toons, and a while later I was joined by Jedli and Vilkar (both fvs) and one guy who didn’t know the way to the quest. I started solo with hireling and very quickly realised that a lvl 22 quest is a bit too much for a lvl 20 first life sorcerer. I had spent about half my mana before I even got to the first room.

After Andy got in, he told me to not fight the rakshasa, only read the glypghs and ddoor. So, we did that in a room or two. Rest of the quest is smooth and I run off to get ship buffs before we head to the raid. Vilkar has to leave so it’s just me, Andy and Jedli, but Andy’s barb is lvl 23 and Jedli thrid life 25, so I could have piked. 🙂 Raid’s good, but loot’s moot.

ToD (Elite)
I talk with Andy and he wants me to run ToD. I ask if elite is ok, and he says sure, as long as I run it now. 🙂 I switch to Thaz and lfm for “Elite Tod. Be awesome.”. 🙂 I quickly get ppl, including healers. We end up waiting for a shadow tank a little while.

I’ve never done elite before, and as always, quests are different depending on difficulty. I don’t remember seeing that many hellhounds in hard. Obveril volunteers to kite the jailer and he’s in trouble a few times because of the dogs and the jailer runs to us. But we get it sorted with only one death. Then phase 2 is just great. Shadow tank is awesome and we have no deaths. 🙂

In phase 3 dps is good, I’m lagging a bit and Suulo arrives really quickly. We’re doing it as we always do, one guy is tanking Horoth while everyone else is taking down Suulo. Then something strange happens. Horoth tank gets Suulo aggro. So suddenly we have both bosses in one spot and they just won’t separate. So melees fight Suulo there and then instead of how it’s usually done. Other than that it’s a good fight. 🙂 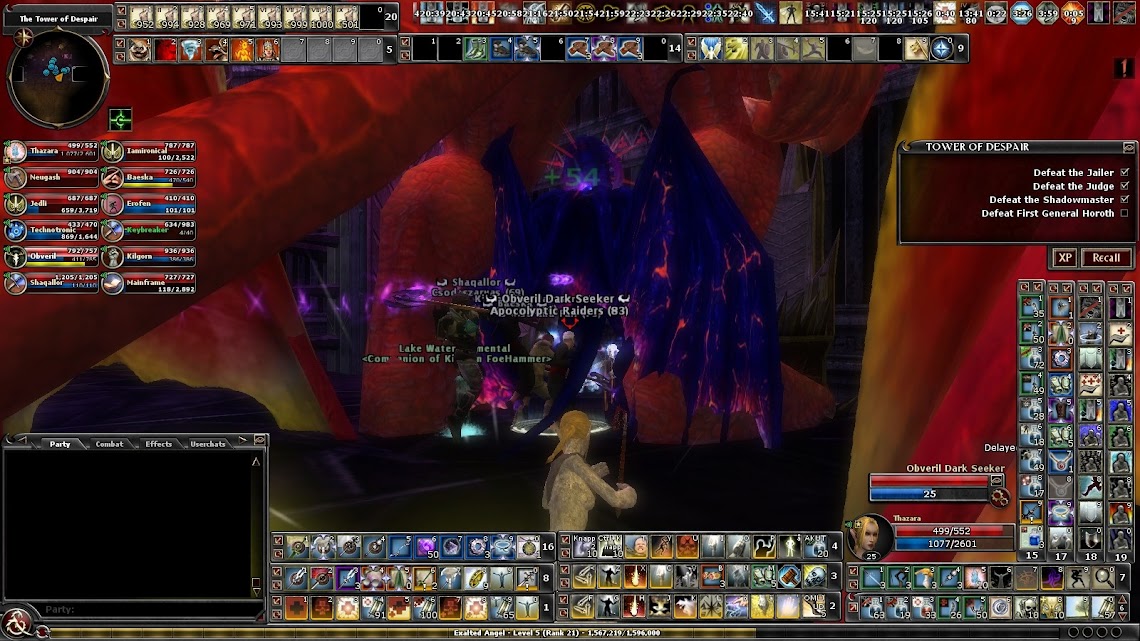 eADQ round 2 (Normal+Hard)
While I’m in the final fight of ToD, Domfig logs on on his capped toon. It’s still a few hours til Shroud so I suggest we run ADQ. I lfm for eNorm+eHard, and we quickly get a few ppl. Even though the ppl who join are prolly awesome enough to solo the rooms, me and Jal do all of them in order, with some help from the others. Just before boss fight we get a 6th so we wait for him to get there. Again this run, I started solo, ran into trouble, and died. 🙂 My toons just don’t do well solo, lol! So after preraid I run to get buffs and Vilkar joins this run for the raid. We go in on hard and, even though it takes a little while for us to take her down, run is pretty smooth, imo. 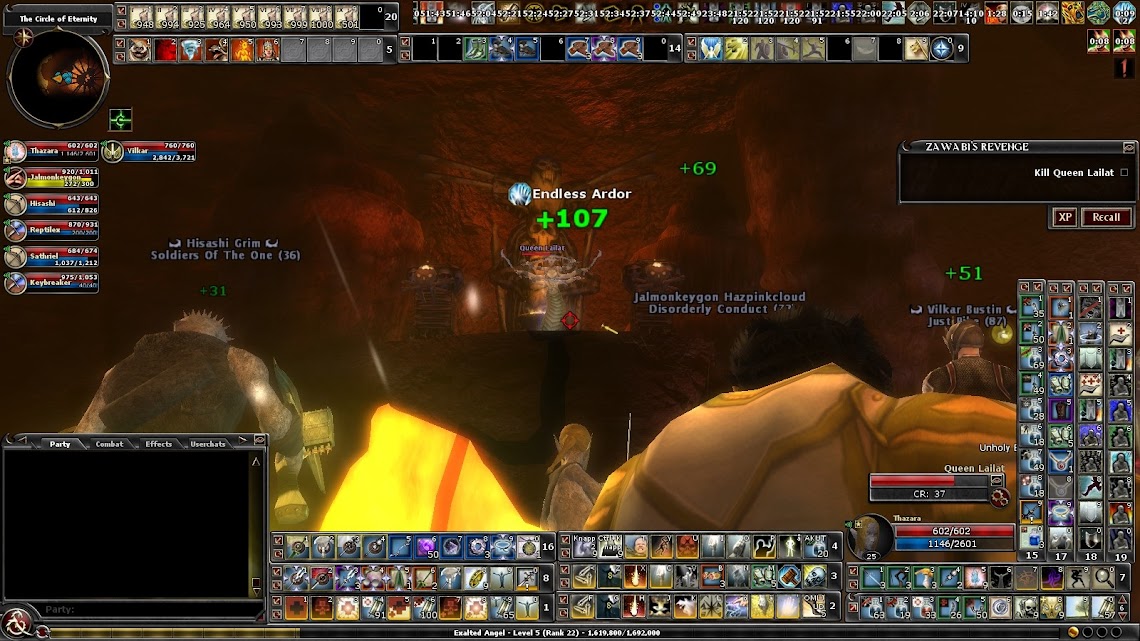 Shroud (Elite)
After ADQ I take a short break to get something to eat, and then post for elite shroud. I get heals really quickly, and party fills otherwise somewhat fast, even though there was an elite shroud on the lfm a few hours earlier and another one is posted just as we’re about to fill. Again I save a spot for a caster and then last spot for Niv. I wouldn’t run without him if he’s on, since it’s the only run we actually have scheduled.

This week we’re a bit low on dps and I drink a few pots during phase 4 & 5. Phase 4 takes a whole 4 rounds and 3 of the melees die from the blades. Other than that I thought it was a smooth run. Now, check out the pictures below for what numbers Thaz’s mass heal was hitting. That is in US ED with positive spellpower around 200 or just below. 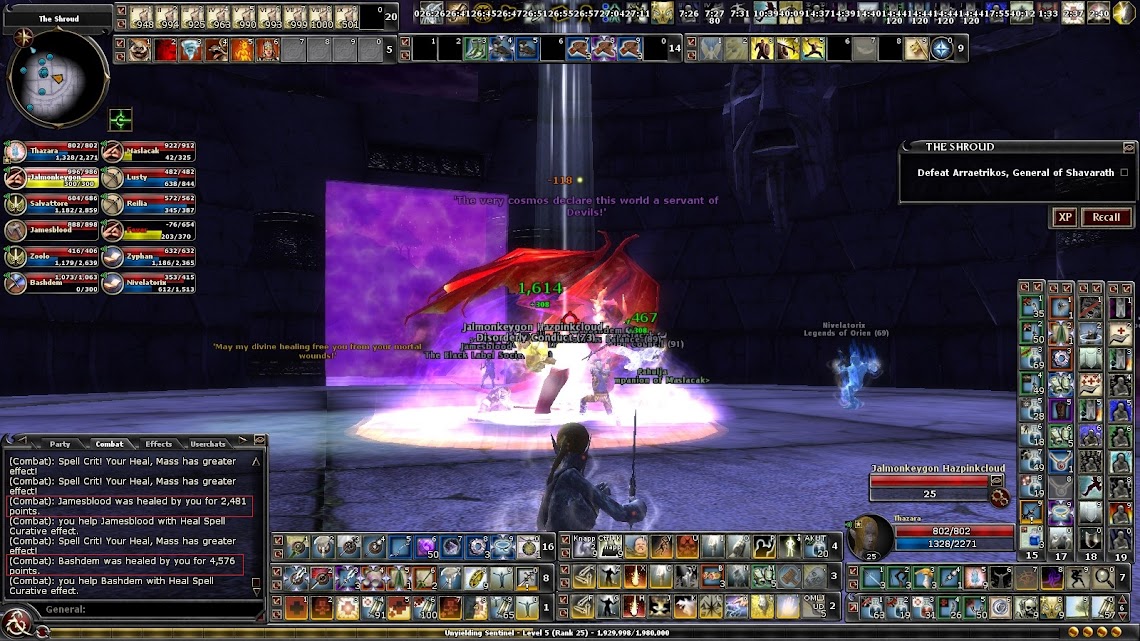 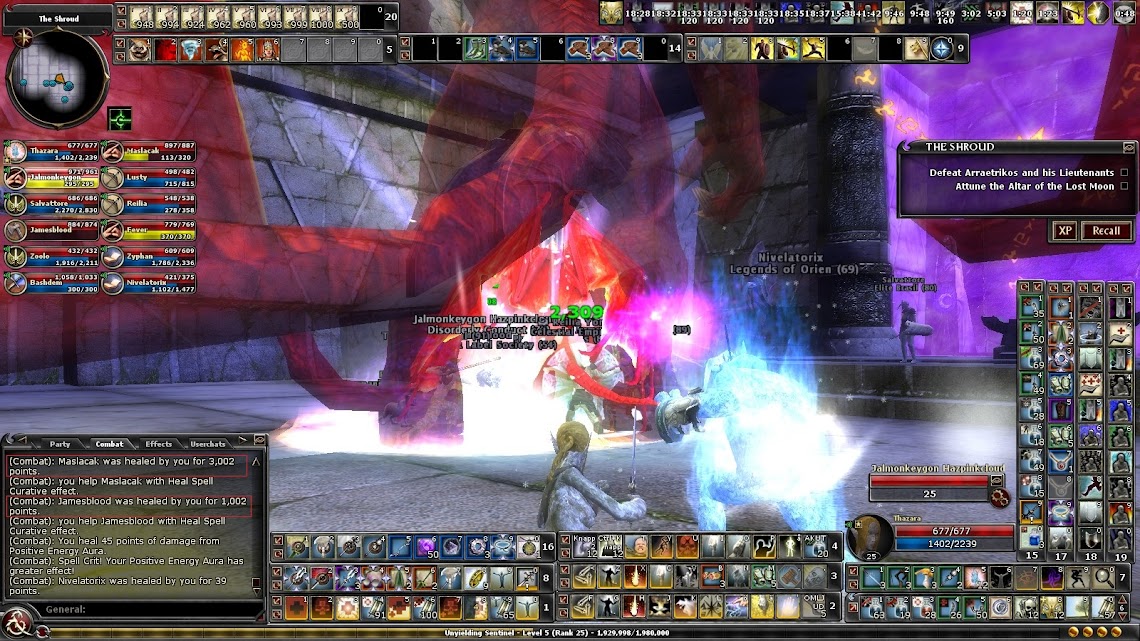 VoD (Elite)
Niv still wanted to run something, and him, Jal and me decided on Vod Elite. Again I posted for “be awesome”. 🙂 One guy sent me a tell “awesome how?”. I replied “haha. I donno. Just know u are”. 🙂 Well, if u have to know. My be awesome is pretty simple. Know u can do it. No hesitators welcome.

We fill quickly, only end up waiting for two more healers. I get ppl hitting the lfm, but I tell them that sorry, I want 2 more healers (lfm said heals, but guess ppl don’t read). After we fill I buff and head to sub, Jal and someone else helps me find my way (I get lost). I also manage to kill myself by the puzzle, since I try to do a jump and hit the red walls. My stone ends up on the bottom and I need help to find my way back up. But no worries. Thaz got all the self buffs she needs, I only lost the +2 wis and +2 con.

I got one guy who says he can tank, so I let him do it. Someone called a lich summon, which is causing some problems, though, and Suulo runs off a few times. Then suddenly Suulo get stuck in the wall. Oh crap. I’m standing there trying to target him, when he teleports out. A while later out tank disappears into the wall and gets stuck. As I’m focused on him, I notice it right away and ask another guy to take over as tank. Rest of the run is smooth, but poor tank guy doesn’t manage to get out of the wall. Ppl keep trying to get a ddoor into the wall and when they finally do, he takes it, but is then locked out from the fight area and loot. Ppl are apparently waiting for me to loot, so when it’s clear that he won’t be able to get there, we loot and finish. 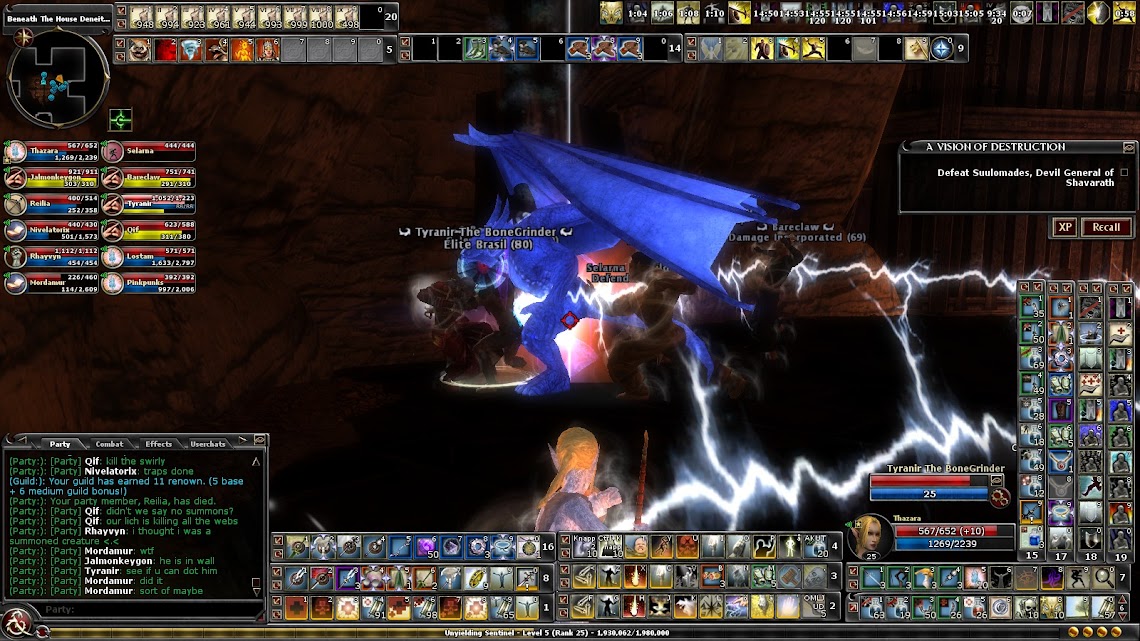 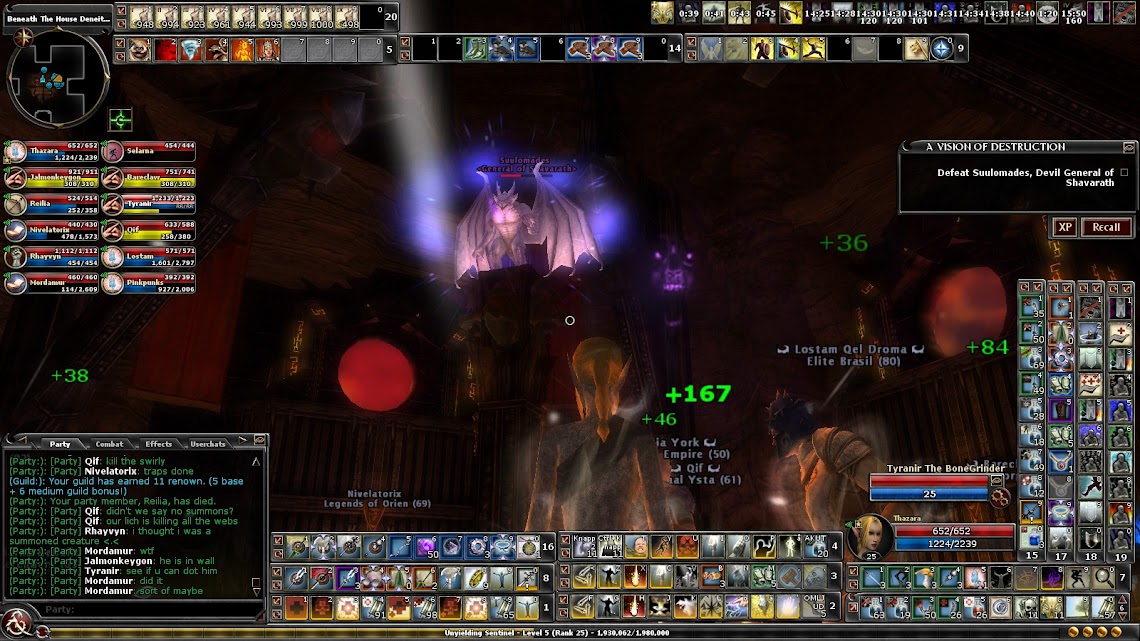 LoB (Heroic Normal)
Jal has to leave and Niv asks me if I want to run something else. I don’t really want to lead anything else, so Niv logs off. Then I see an lfm for LoB normal. I hit the lfm and tell the party that I had to hit it because I badly want a completion, on any difficulty. These ppl seem to know what they’re doing and are joking around a abit. 🙂 Heroic normal is apparently very easy (well, last time I tried heroic hard we failed). Group and tank is good. I’m mostly focused on healing the tank, but am paying attention to the whole group. A few ppl die and I don’t raise them becaue the last 2 times I’ve run it I ran epic and on epic there is a death timer. Apparently there isn’t one on heroic difficulty.

At one point I keep getting run over by LoB. He probably ran me over like 5 times, lol. But I don’t die, so that’s cool. Someone takes out the last pillar too soon, so we miss out on one optional chest, but other than that it’s a good run. We also do the elemental optional. 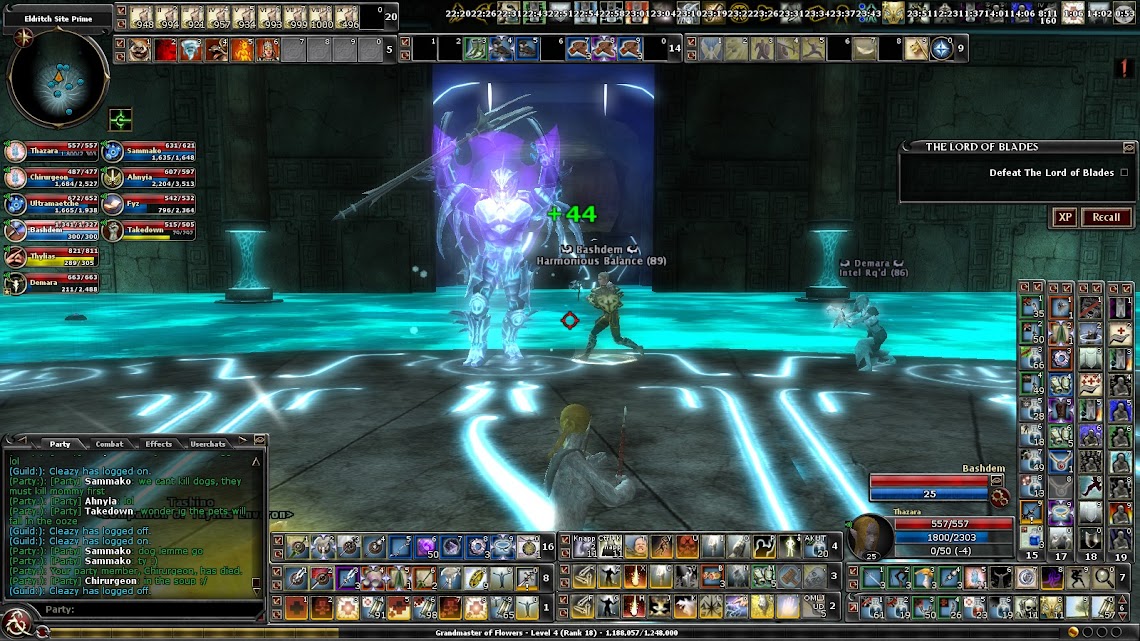 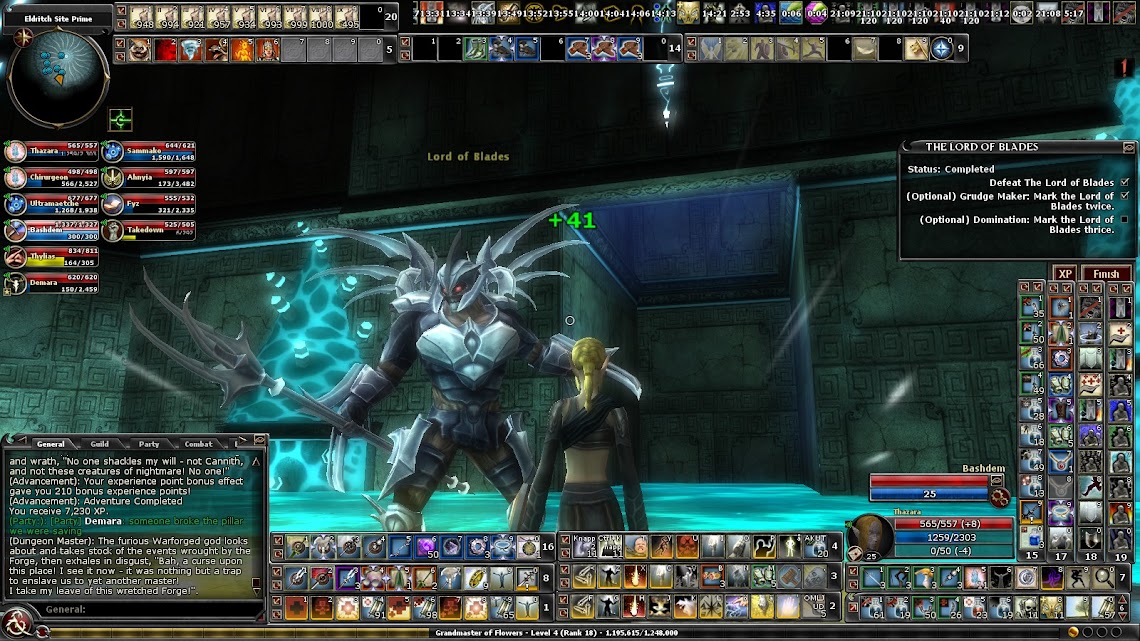 After this I was getting really tired and Cleazy wasn’t on so decided to log off a bit early (4am) this time. 🙂 After this day’s runs Thazara hit a favor number of 4404. 🙂

Thank you for reading and have a great day.

P.P.S. 3 things I didn’t meantion in the blog: 1. my crappy net connection that keeps breaking, 2. stupid chat that get’s f’ed up after u dc and 3. getting kicked out of an elite shroud with cerge when I logged to fix chat – which fyi pissed me off a lot. Wanted to squelsh that guy.

P.P.P.S. Good loot this week: Thaz got token, scale and SOS in eVON, and an unbound +3 int tome in ADQ.