On Sundays I usually sleep late and write my Saturday blog while having breakfast, usually in early afternoon. This Sunday I decided to log on to DDO instead to check if Cleazy was on. He was, but was busy getting an eADQ group together. I only have one epic toon, Thazara, and she ran eADQ on Saturday, so no go. I was just hanging around for a while, then saw an lfm for The House of Death Undone, epic elite looking for healer. I sent a tell than I just capped Thaz yest and that I could run.

Sschindylryn Epic Elites
I told the party that I’m unsure about where the quest is, so pls don’t enter before I get there. Found my way fine. Start was a bit messy and I didn’t know that freedom of movement was needed until someone complained “omg. ee and no fom”. I replied “sorry, I didn’t know”. Well, duh, maybe say something before we start, then? Party was ok, we had some deaths, including me, but I think we managed pretty well.

After this one we headed over to The House of Rusted Blades, and 2 ppl left the group. I send Jal a tell to come join (he didn’t make it there until we finished that one, though). This quest turned out to be too much for us to handle. Even after I switched to Unyielding Sentinel ED, I still couldn’t take the damage the mobs were hitting me for. After 2 wipes we tried different tactics. Ring the bell, d-door and fight our way from there. I got rather bossy, telling ppl that I’m mass healing from the pally, so stay close to him. I also told party to let arti pull mobs, and even the party leader (who was a wizard) to keep melees hasted. lol. This time around we finished without too big issues.

Then on to The House of Broken Chains. I felt I had found my place in the party at this point, so I kept telling ppl to stay close and making sure everyone was in range for heals (or telling them to stay close). At one point we got overwhelmed by the mass amount of spiders and I ran out of mana and bursts. Safe to say we all died at that point. Lucky for us there was a shrine close by and after I got back up I scroll healed a bit so we could thin out the mobs some, then ran over to the other shrine to get my mana back. Back to the group, rebuff and on we go. The rest of the run went ok. (Second pic is of a spider who got stuck in the wall, lol) 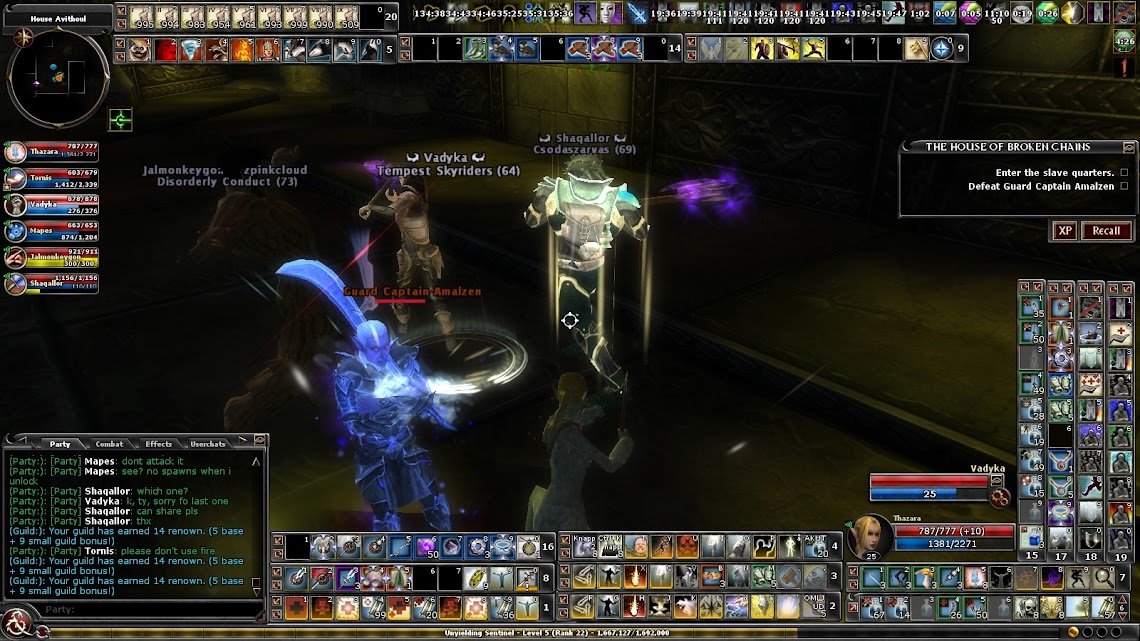 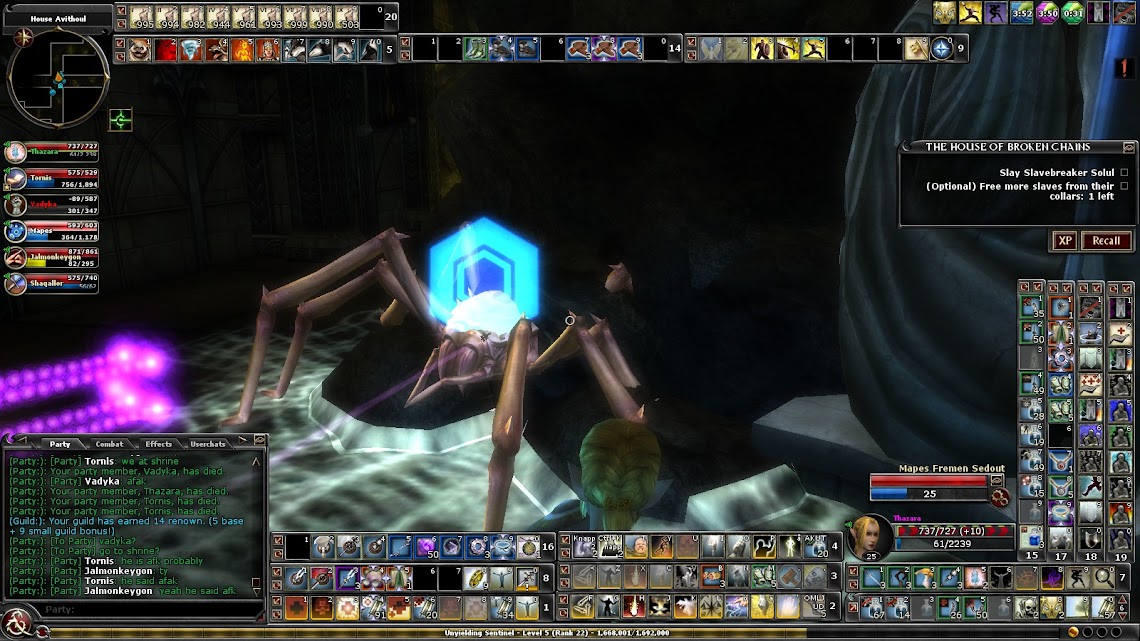 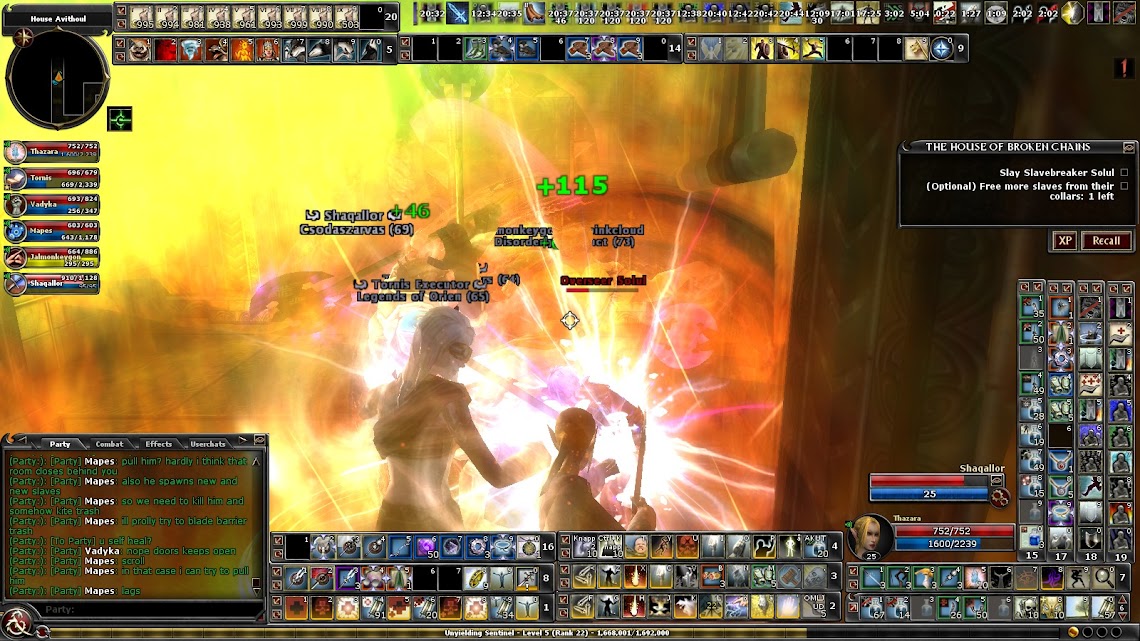 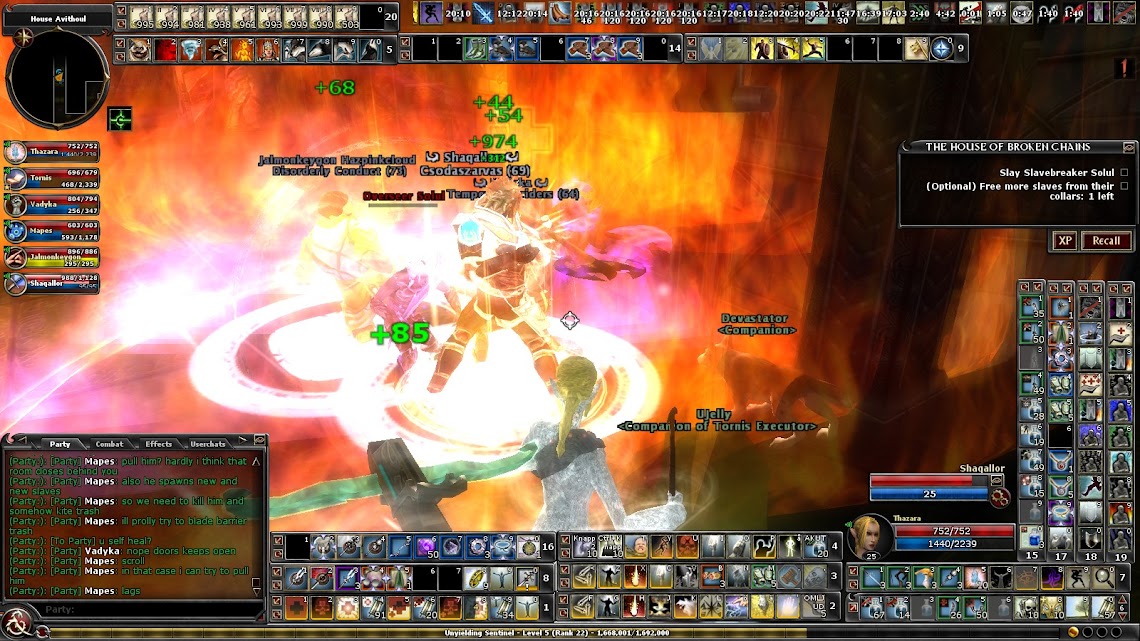 Jal and the pally had to leave after that quest, the rest of us rebuffed and headed over to the final. We got 2 replacements and in we go. Again I was telling ppl to stay close. And yes, I was mainly healbotting, saving all mana for heals, while staying close enough for aura to heal too while blocking. We had some deaths, but nothing as bad as the 2 wipes in blades, or the near wipe in chains. 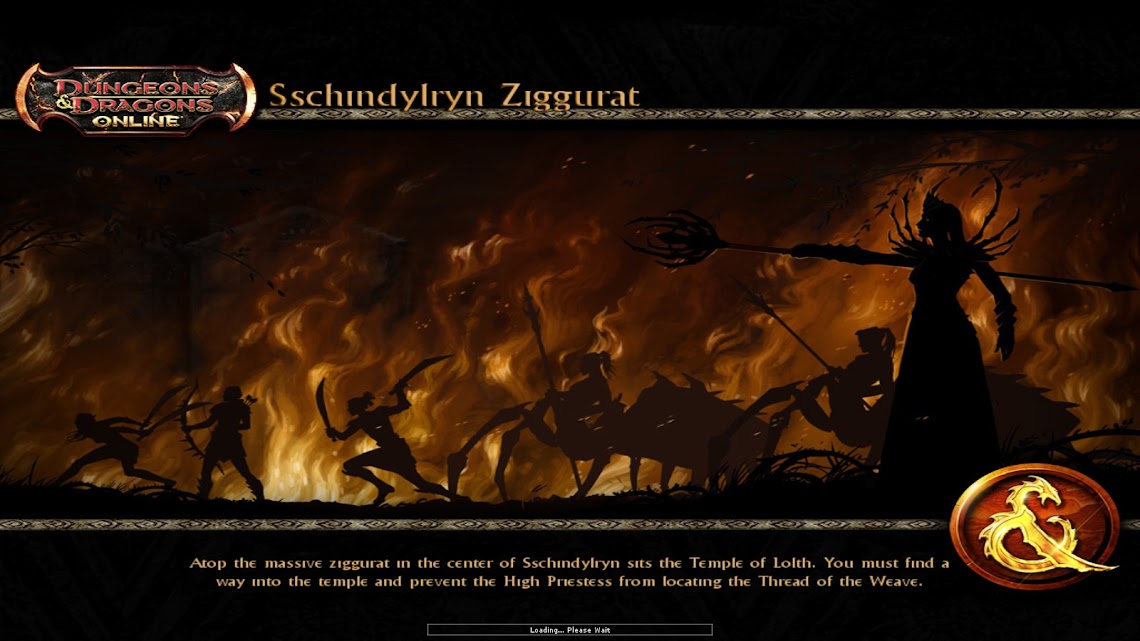 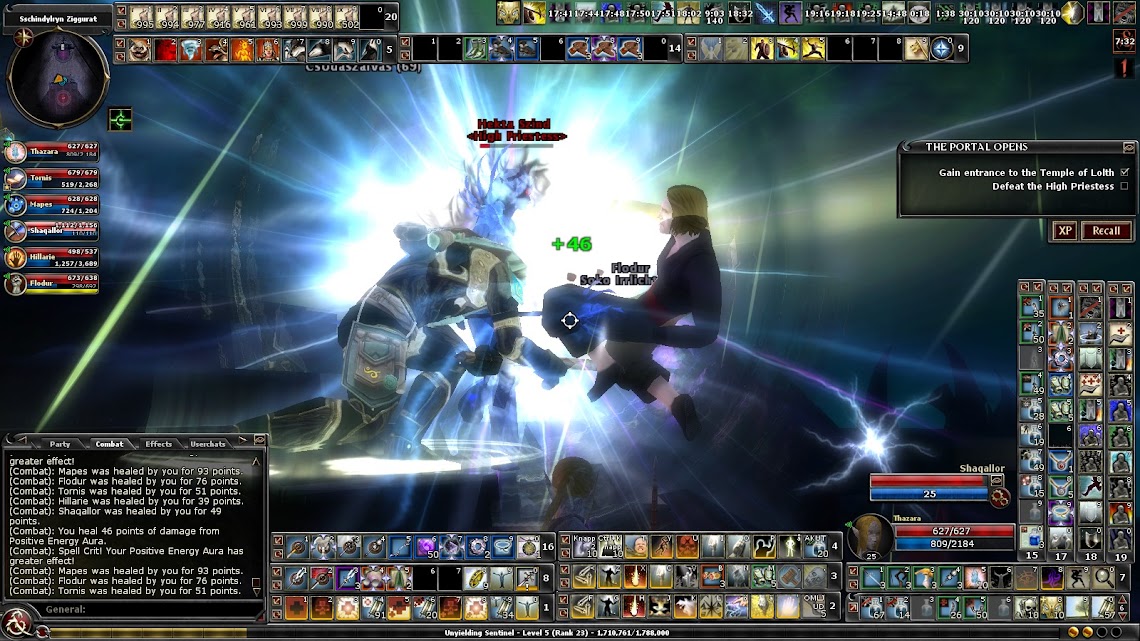 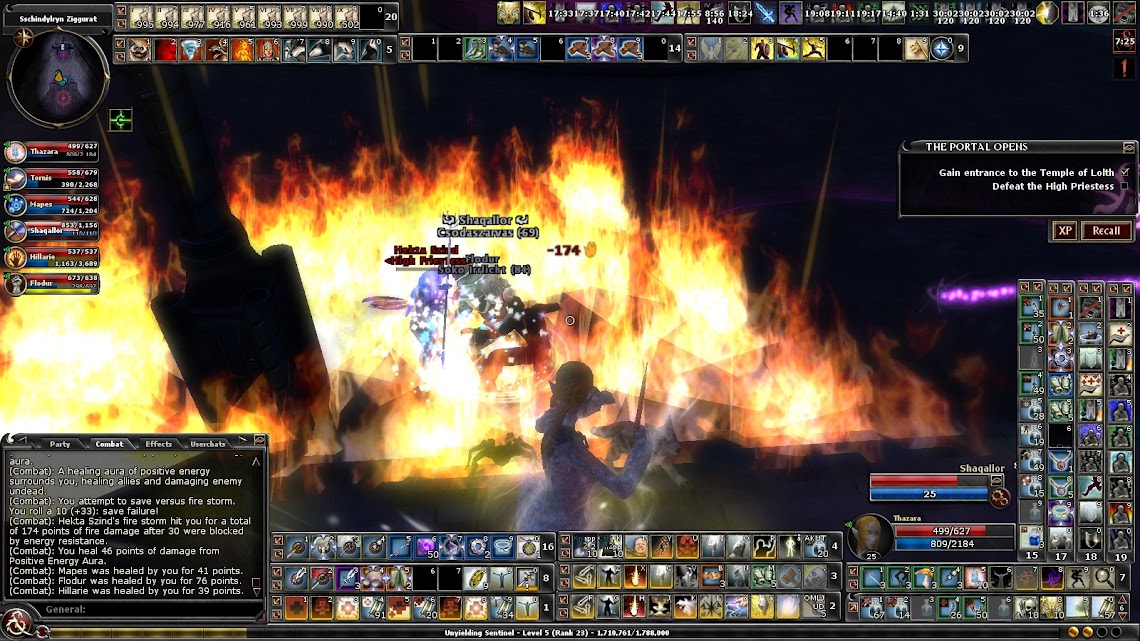 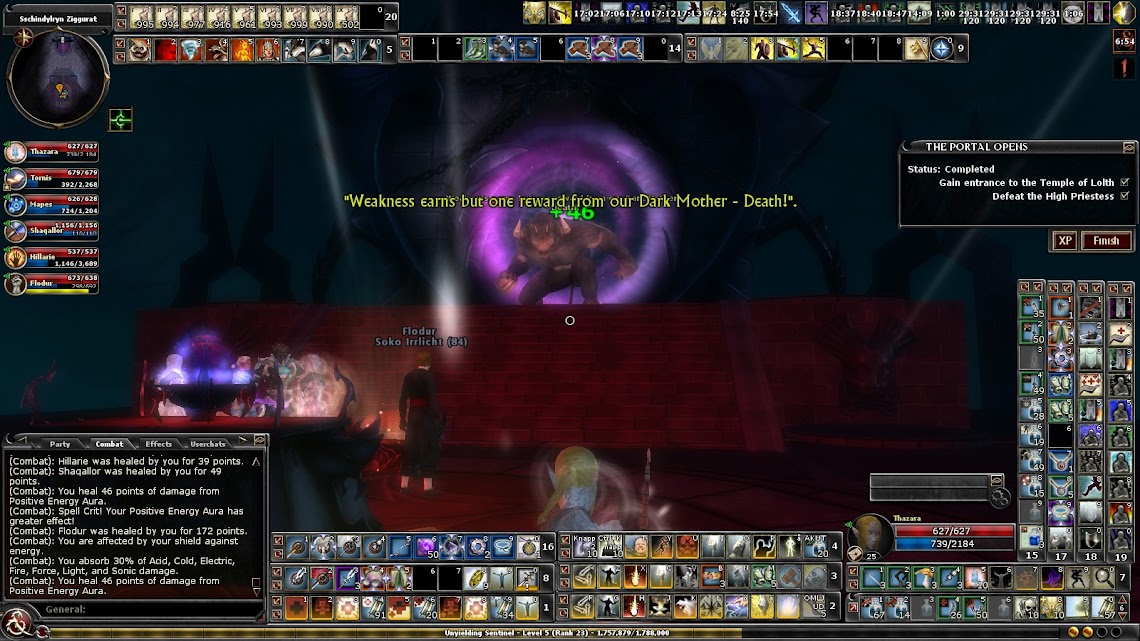 After these runs Thazara had collected a total of 4305 favor. 🙂 But still only 305 pdk. Oh, and with her healbot weapon which gets her positive spell power to 222, I saw her mass heal crit for over 2000, and bursts for over 600. Pretty awesome in my opinion. 🙂

Heroic ADQ
After running Thaz I logged off and went for a jog. Got back later and decided I wanted to run ADQ on Cerge. I lfm’d for heroic ADQ preraid casual, raid elite, need second group. I got a tell from someone wanting to do the preraid elite, so said, ok, we can do that. I got 2 more sorcerers and then a monk. I headed over to the quest to get started, the first sorc found his way, the other got lost and the monk was going to show him the way, but he got mad at me for not waiting for him and left. Later on he started sending me tells that I was rude, and that he was laughing at me for entering and dying (first glyph was octo and the blade trap got me). 🙂 I replied “It happens”. (and some other things, but at least I didn’t get mad. Dude was rude, imo).

A while later we were joined by an fvs and a 3rd sorc. The monk had to do most of the work because us sorcs are squishy! 😀 We got through the preraid ok, then headed over to 5 man the raid on elite. Safe to say we wiped. I put up an lfm for more ppl with “have preraid done” and got a wizard. Second time, wipe again. I told the group ok, one more try, then I have to go. This time everyone got ship buffs and we made sure everyone was buffed before fighting the marilith. Third time was the charm, marilith went down pretty quickly and painlessly. 🙂 And Cerge got his first ADQ completion. Loot was moot, though.

That’s all for now. Ty for reading and see u in game.

6 comments on “Epic elites and ADQ”