And then it was Saturday again and Thazara’s raid night. I was a bit late on again, didn’t get on til about 10pm my time (gmt+2), which means 2h until my weekly shroud. I was just on the guild ship contemplating what to do when Cleazy logged, which is still pretty early for him on a Saturday. 🙂 Well he didn’t want to do U16 content, but raids, so I said, ok, anything is fine. First pick was ADQ.

eADQ
Cleazy lfm’d for eADQ preraid eN, raid eH. I think we had a 6 man group for the preraid, but someone dropped, and we didn’t get a replacement. Then after the preraid someone had to leave and we ended up 4-manning the raid on epic hard. Wasn’t too difficult though, and Thaz got a raid token. 🙂

Here’s what Cleazy/ Shysty got from the scorpion chest in ADQ (think he got some other stuff as well, but still, no one passed him anything): 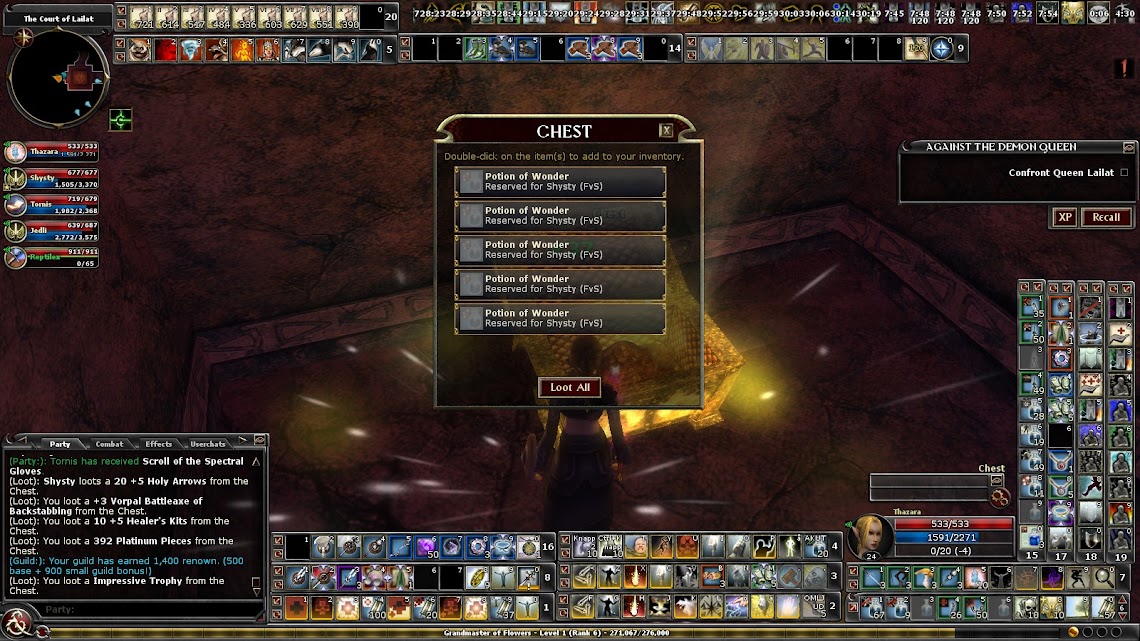 eVON
Less than an hour til my weekly shroud, so Cleazy said we could do an eVON, since he usually runs them in less than 30 mins. 🙂 Raid was a bit slower than usually, I did want to get the chests in VON5, but boss fights went well, and Thaz got a little bit of xp. No raid token though, and no scale. 😦 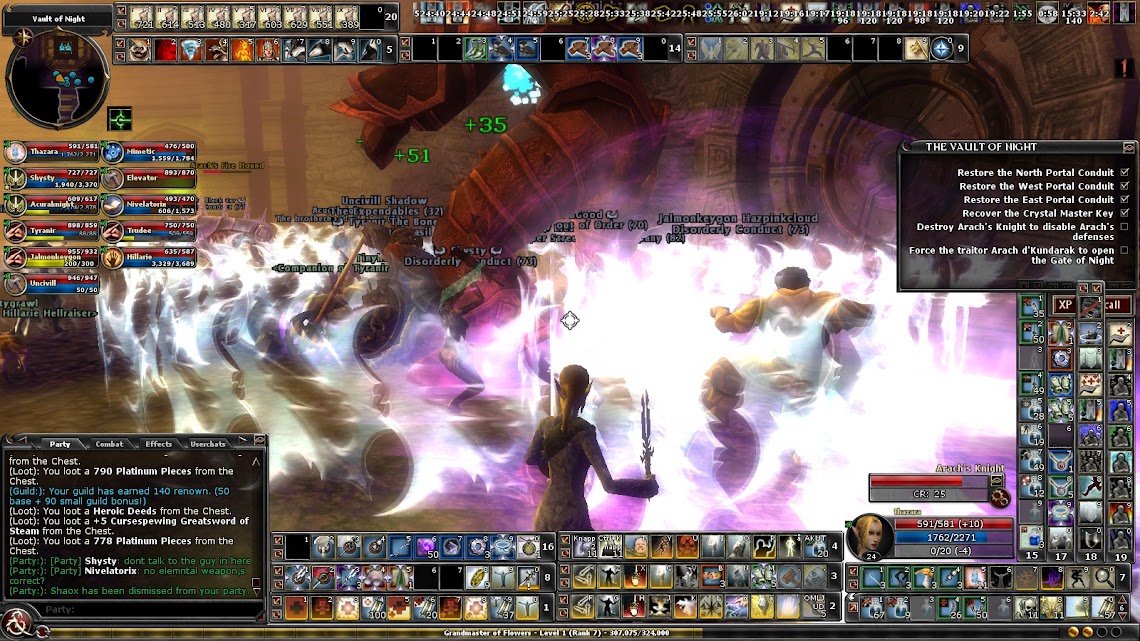 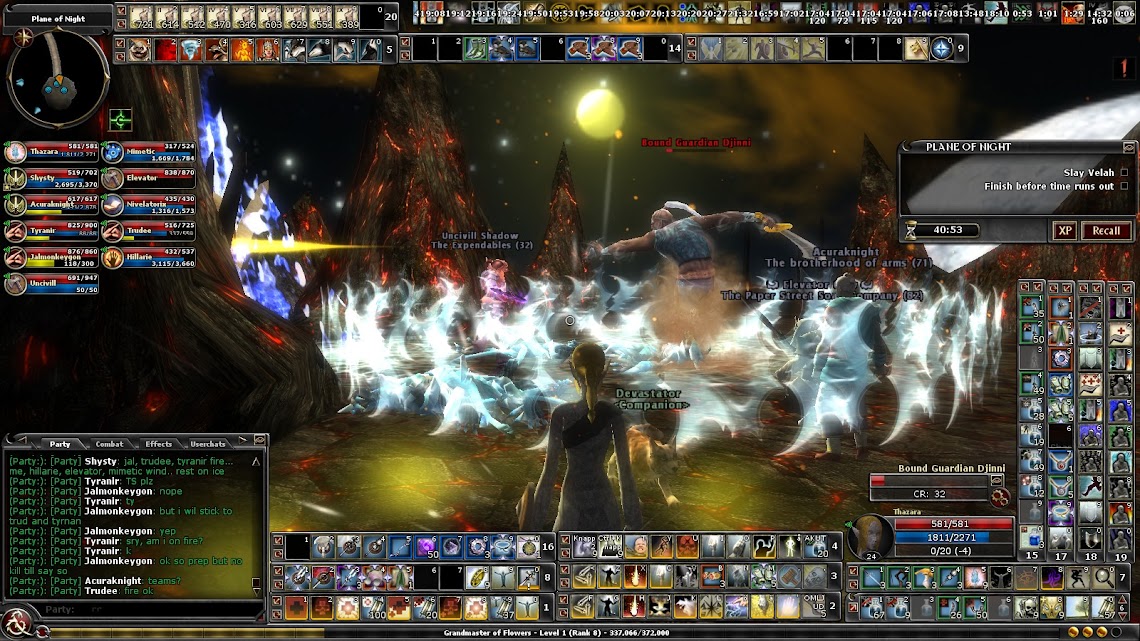 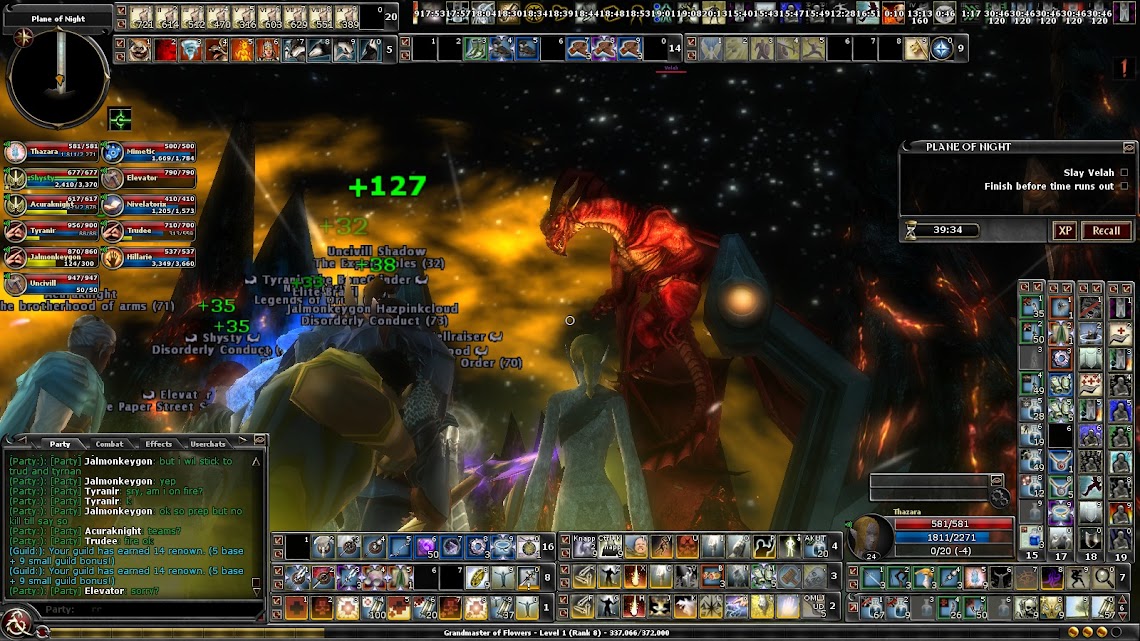 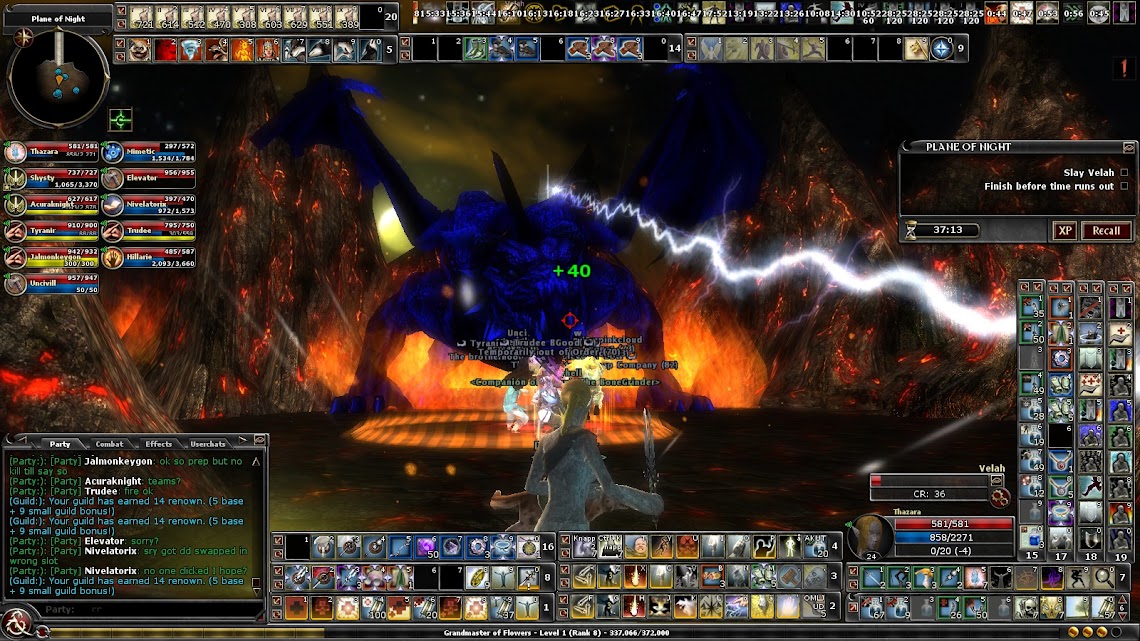 Elite Shroud
This week the shroud lfm didn’t fill super fast, but it was ok. I did have 2 ppl leave just as we entered, and I don’t like that too much. But as it happens, I got suggested replacements from the party even before the other two left, so we didn’t have to wait long. Dps was awesome. 🙂 I think Niv or someone complained about portals being taken out so fast that he didn’t get a chance to shoot them, lol. The second fvs died in phase 4, first round (Harry was down to under half after first round), other than that we had no deaths. And, Thaz still had 70 sp left after Harry went down in phase 5, even though I was dot’ing and healing the whole time. This has got to be the highest dps group I’ve done shroud with so far. 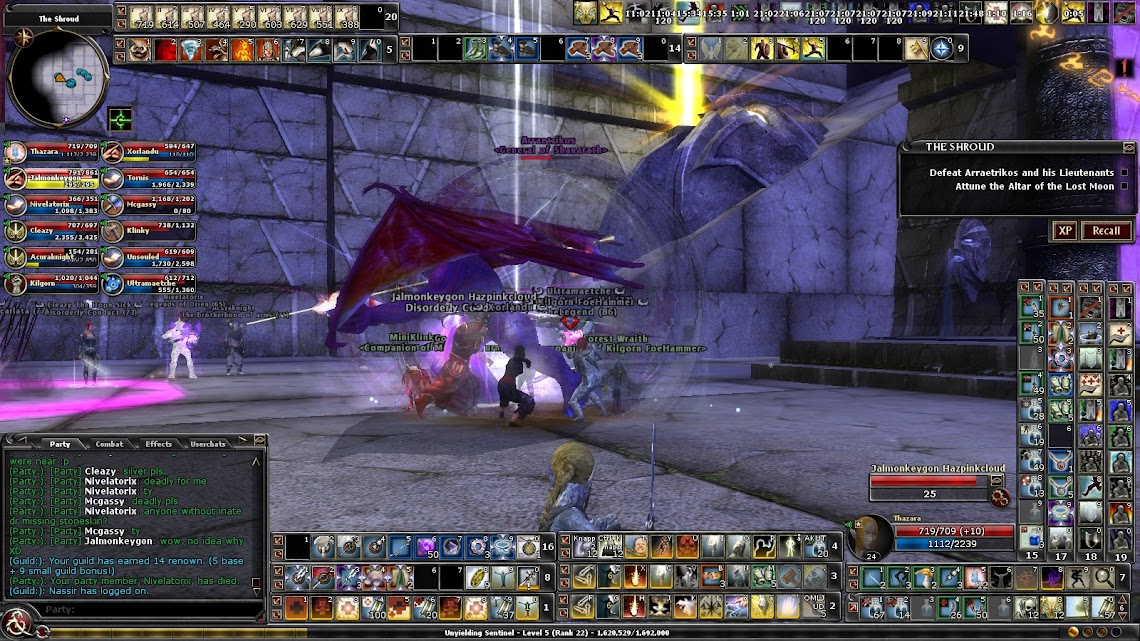 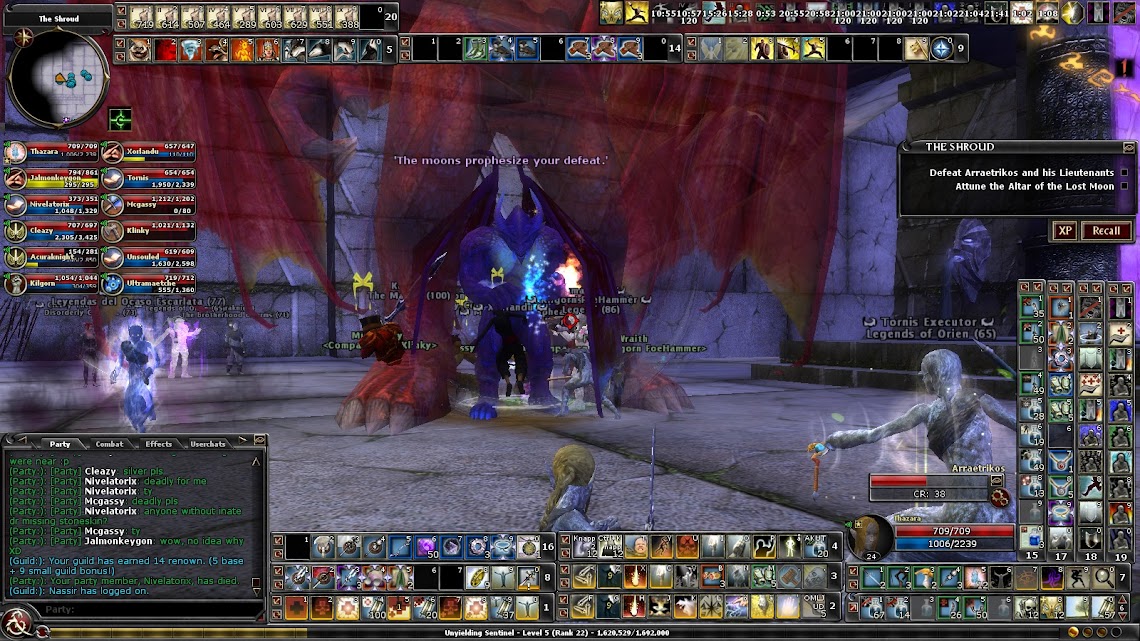 Hard ToD
Cleazy had to leave right after Shroud, but Niv And Jal stayed on for ToD. This was my 5th time running ToD, 3rd time leading it. 🙂 I got a good shadow tank, and 2 good boss tanks. We had one death in phase 1, other than that I don’t think we had any deaths. And this time I actually assigned roles, which I’m pretty proud of, lol. Usually I ask ppl; who wants to do what, this time I decided who tanks what and who heals what. Was a smooth run. Pictures: 1. Watch the unfolding drama, 2-3. phase 1, 4-5. phase 2 and 6. before the start of phase 3 (I entered before the rest). 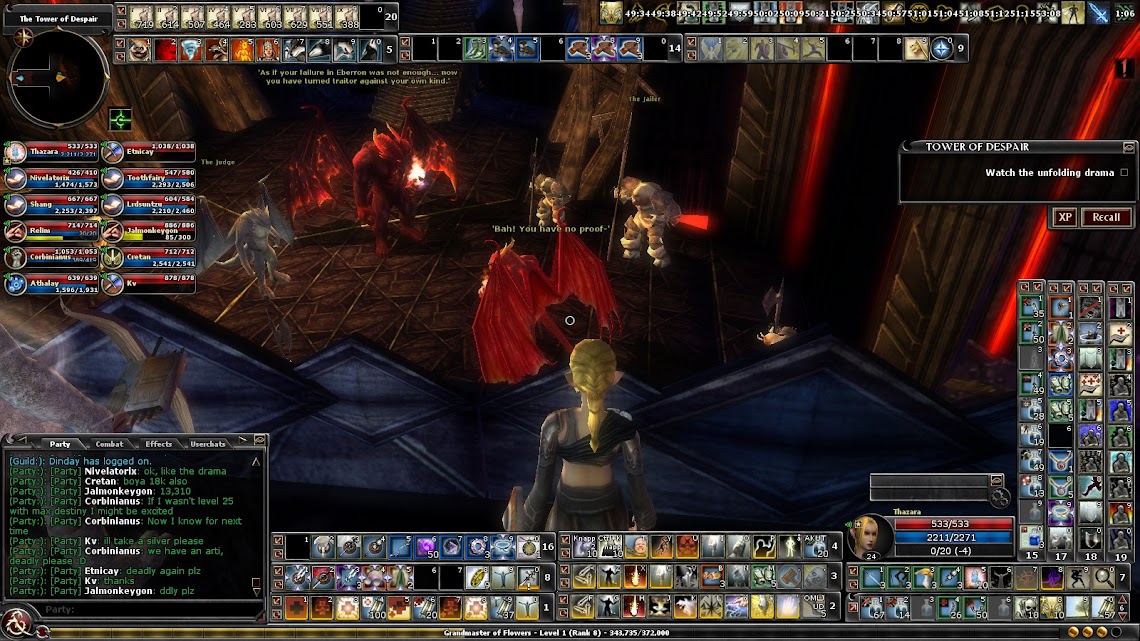 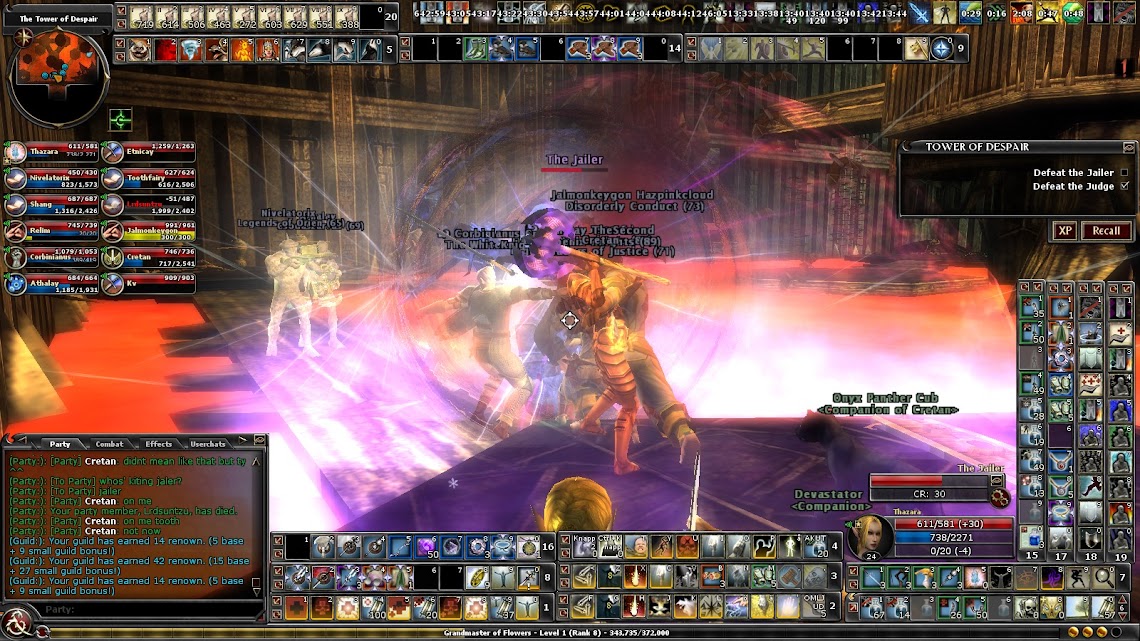 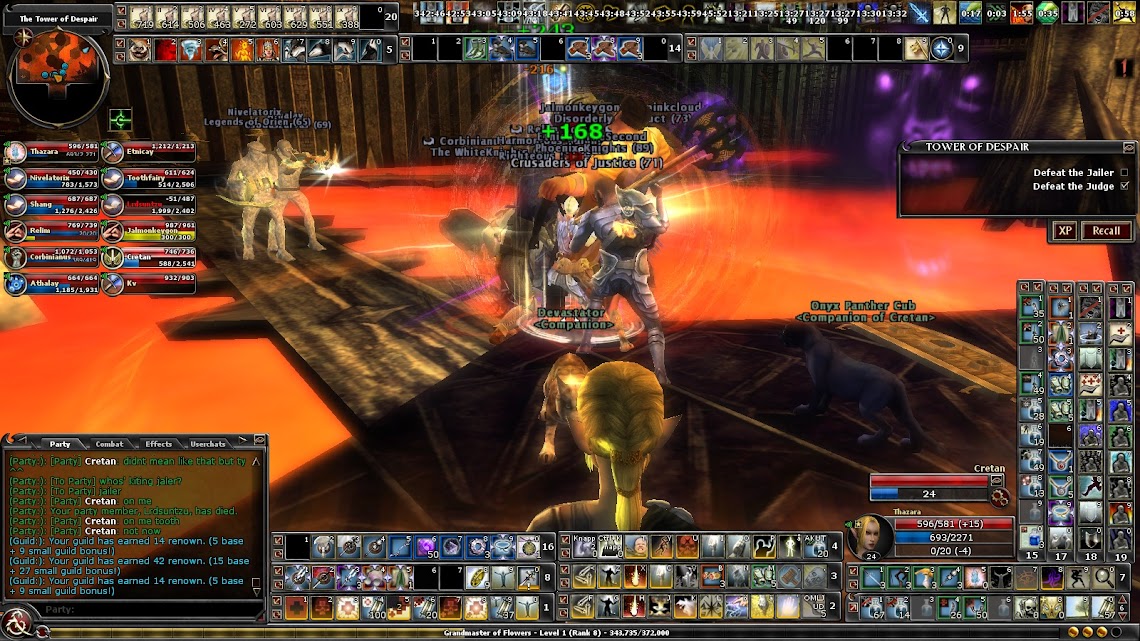 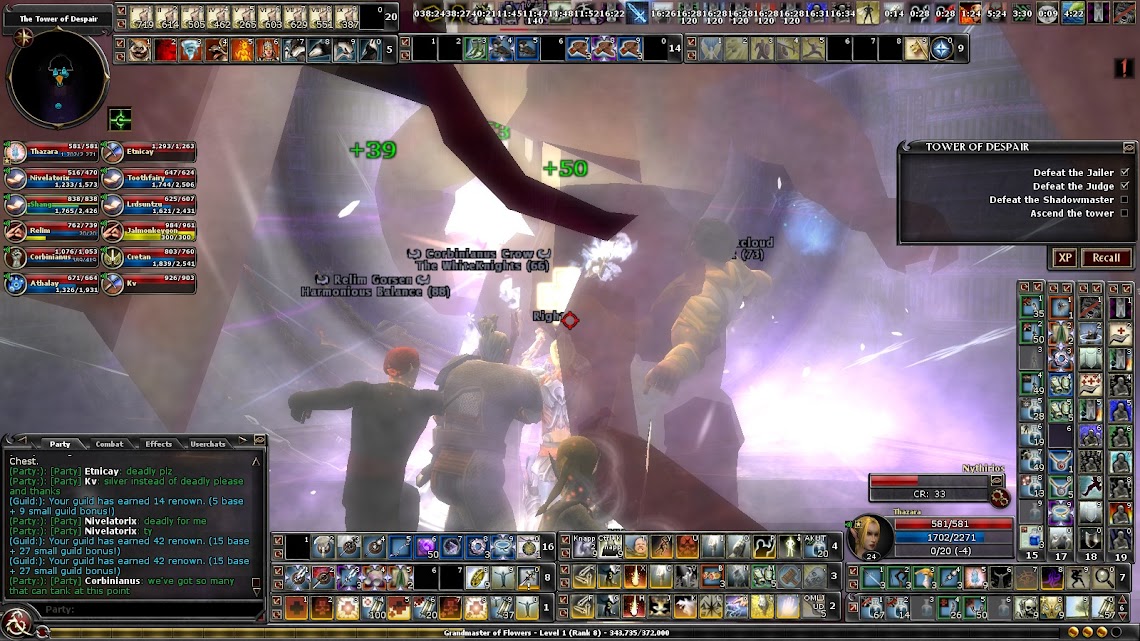 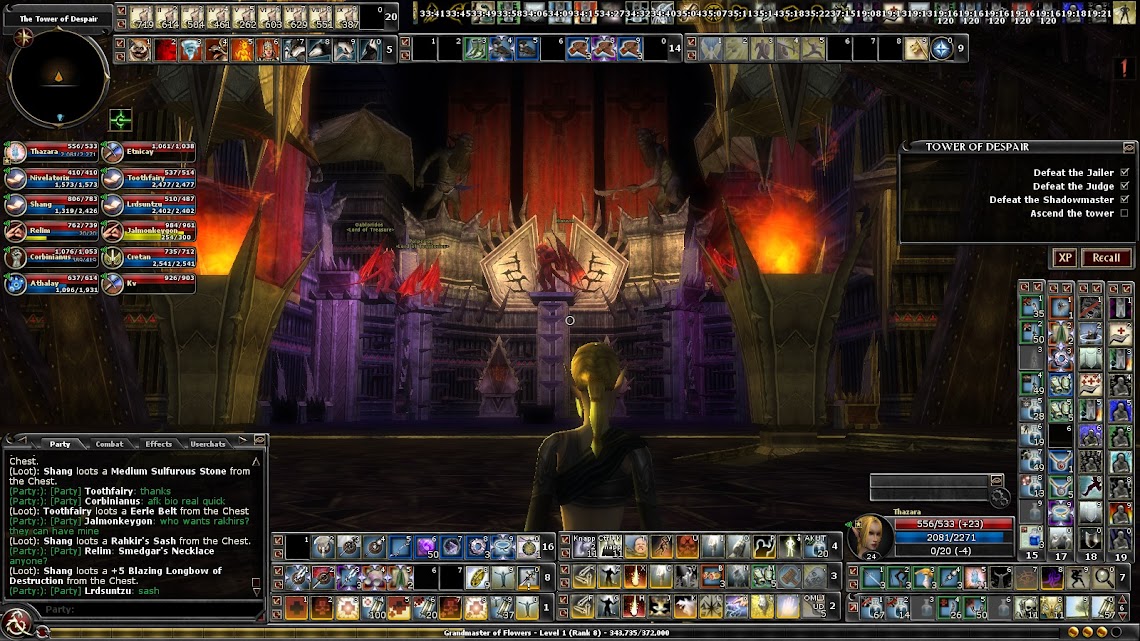 The High Road
After ToD I saw a group on the lfm doing U16 quests on epic hard. I joined and made my way to the wilderness. In the wilderness the group was somewhere under ground, where I couldn’t find them. I ran into a rare spider, and decided to fight him while waiting for the group to make their way to me. Damn spidey had a lot of hp. As u can see in pic 2, my dp was hitting him for over 900, still took me several minutes to take him out. 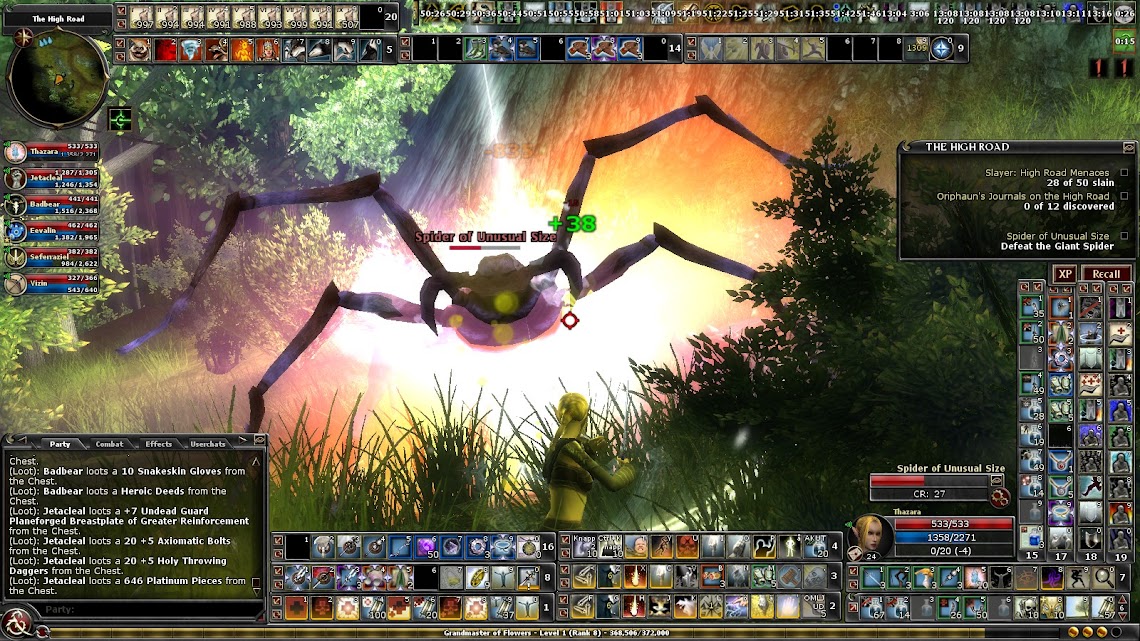 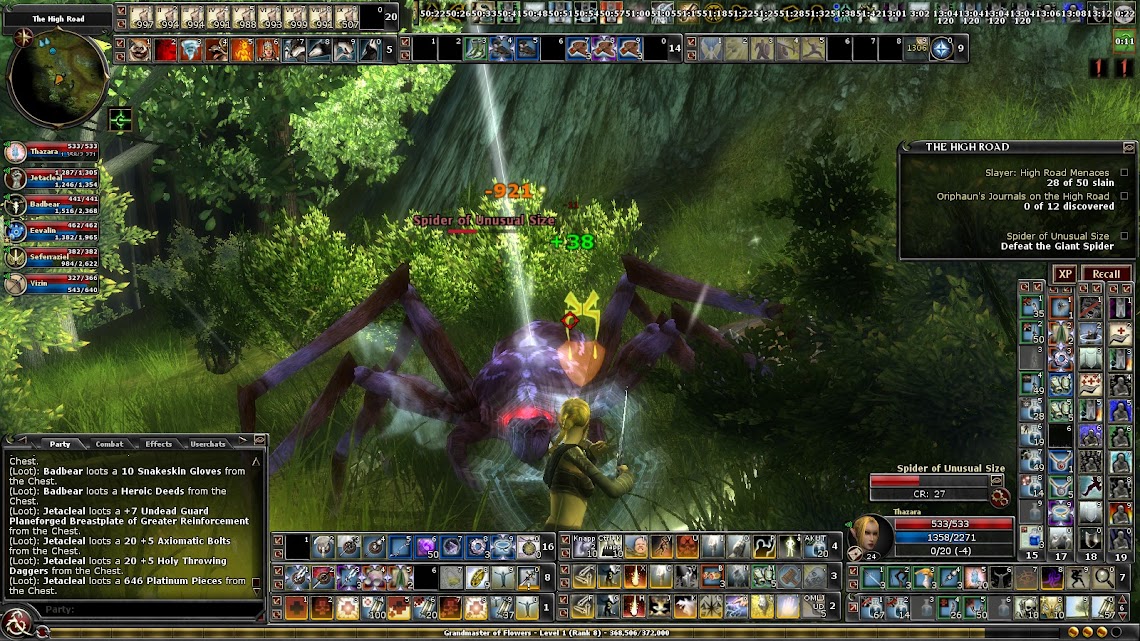 As I joined the group when they were almost done with the chain, I only got to run 2 quests: A Stay at the Inn, and The End of the Road (chain final). We ran them on epic hard. I forgot to take any pics in the first one, the pics below are all from the final. 🙂 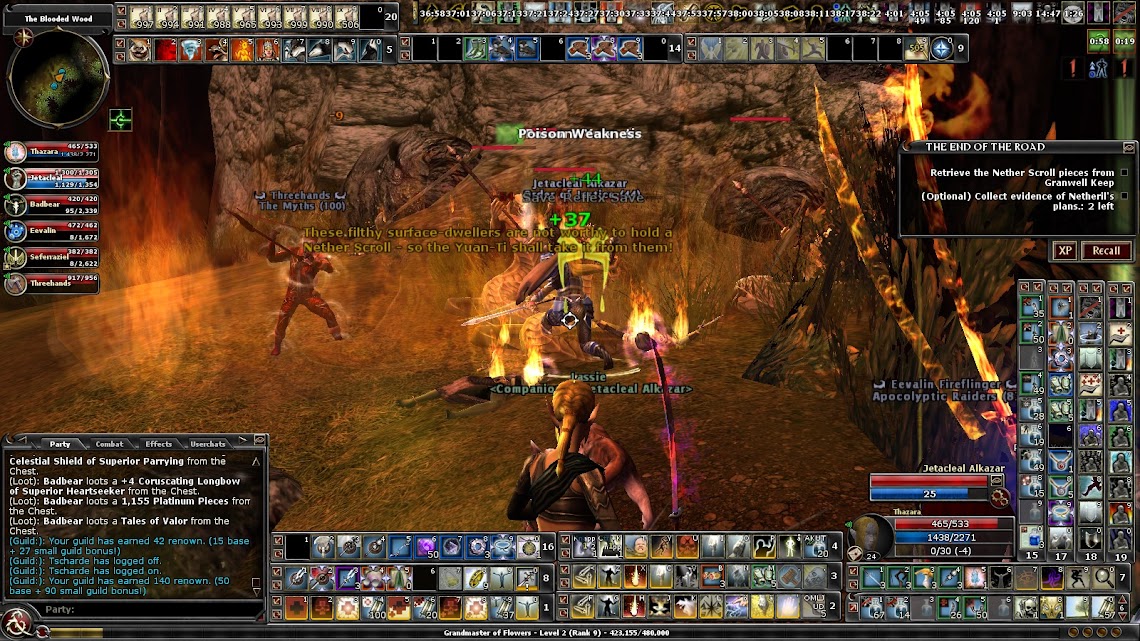 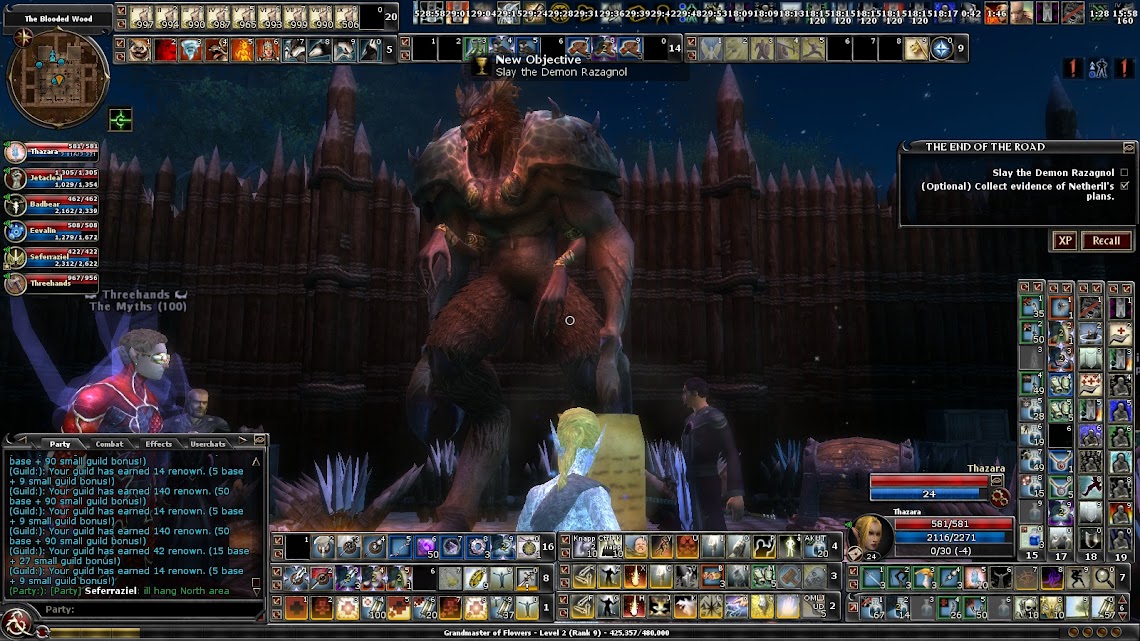 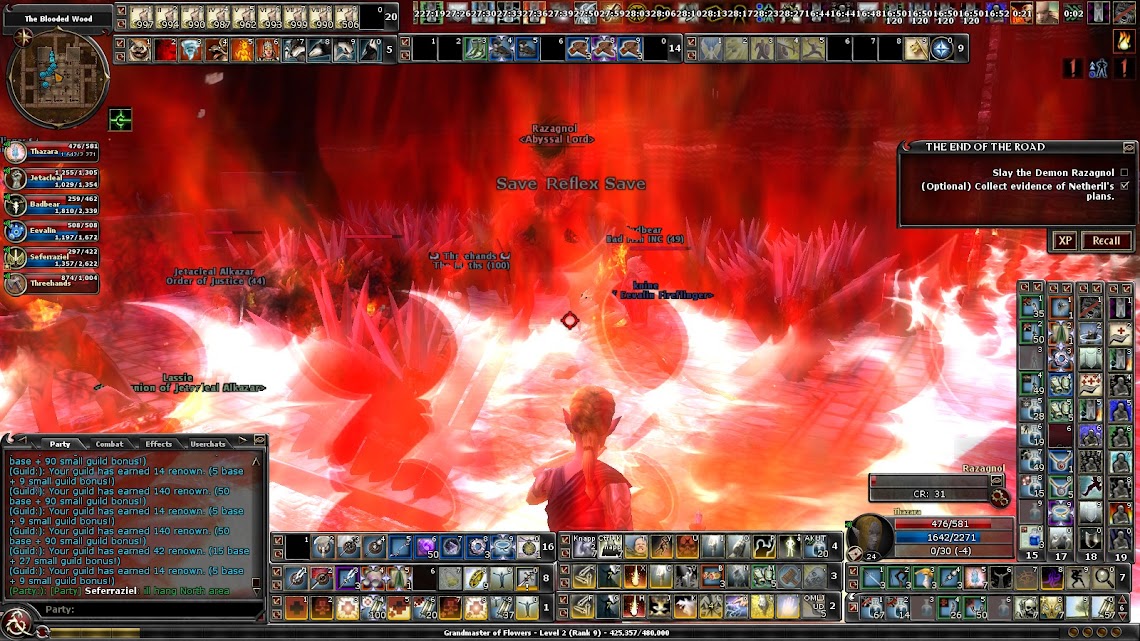 After this it was time for Thaz to call it a night and for Micki to head to bed. But first I leveled Thaz to 25, since I had capped her while running the Inn. I used to want to keep levels, but after learning that u no longer suffer repetition penalty after taking 25, I wanted to get her there asap.

That’s all from me for now. Take care and see u in game.

P.S. Since I’ve been told that ppl prefer my action pics, this time almost all of my pics are action ones.

P.P.S. I still need to write a sunday blog, but might leave it for Monday, since it took me about an hour to write this one. 🙂

8 comments on “Raids and the High Road”