Brace urself, this is going to be long. 🙂

Last Saturday I didn’t play at all, and this week I ran mabar mon-tues, wed I ran an elite shroud on Maidae, thurs Cleazy helped me elite flag Cerge for DD and friday the Cannith group ran Wiz king elite. Last week I think I also only ran one time with Cleazy, so this sat I had decided to run raids with him all night (night for me anyway). Here’s the run down on Thazara’s Saturday night.

I was a bit late to log on, I usually try to get on 3 h before my weekly shroud, but this time I wasn’t on til about 1.5h before. I saw an lfm up for ADQ, but it disappeared before I could hit it. Put up an lfm for ToD instead and Cleazy logged on and joined. We had no joiners in a few min so I suggested we hit the new ADQ lfm that had come up instead. Joined the preraid just as they were finishing up the rooms. 🙂 I sort of like doing that, because then someone else has already done all the work, lol!

One person started a second group and we got almost a full party for the actual raid. One guy realises when we’re about to enter that he forgot to talk to the djinni and can’t go. Ok, well, I guess, sorry? We entered as a 10 person raid party and people were asking for these and those buffs. 🙂 Strangely I thought it was a bit silly, this is still ADQ, one of the easiest epic raids. Anywho, run was good, but I got skunked on loot and didn’t even get a token. 😦 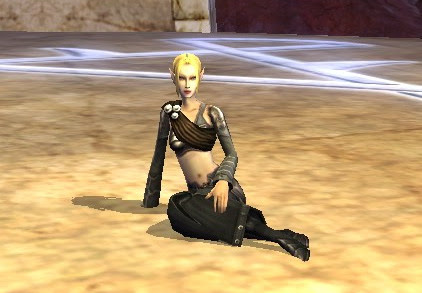 After ADQ there was about 30 min left til Shroud and Cleazy jumped on an Abbot party. Told me in guild chat, but I didn’t notice at first. Told him I don’t think they’ll be done in time for Shroud, but that I could join if they are. I didn’t hit the lfm fast enough and they filled. He proved me wrong, they finished just as I put the lfm up for shroud. 🙂

I put up the lfm with “need caster & dps, heals reserved”, since one healer had asked me to reserve him a spot. 15 min later he hadn’t still shown up, so I lfm’d for a 3rd healer. I got a nice group with some friends, some ppl I knew and a few new ones. One guy, though, hung on til we entered, then said he had to go. Then he just stayed on for a few min, even though he had to leave. So I said “So leave then, so I can replace u”. I got a bit sour, as I had turned down 3 ppl who hit the lfm, and this guy was hugging a spot, which isn’t cool at all. If I didn’t know this guy, something like that could get u black listed.

We had a pretty smooth run, didn’t quite 2 round phase 4, but Harry went down at the start of round 3 and only one death. Phase 5 we did without any deaths, and I used one pot just to keep dot’ing. Got a couple of large mats, but no stone (stupid rare stone). 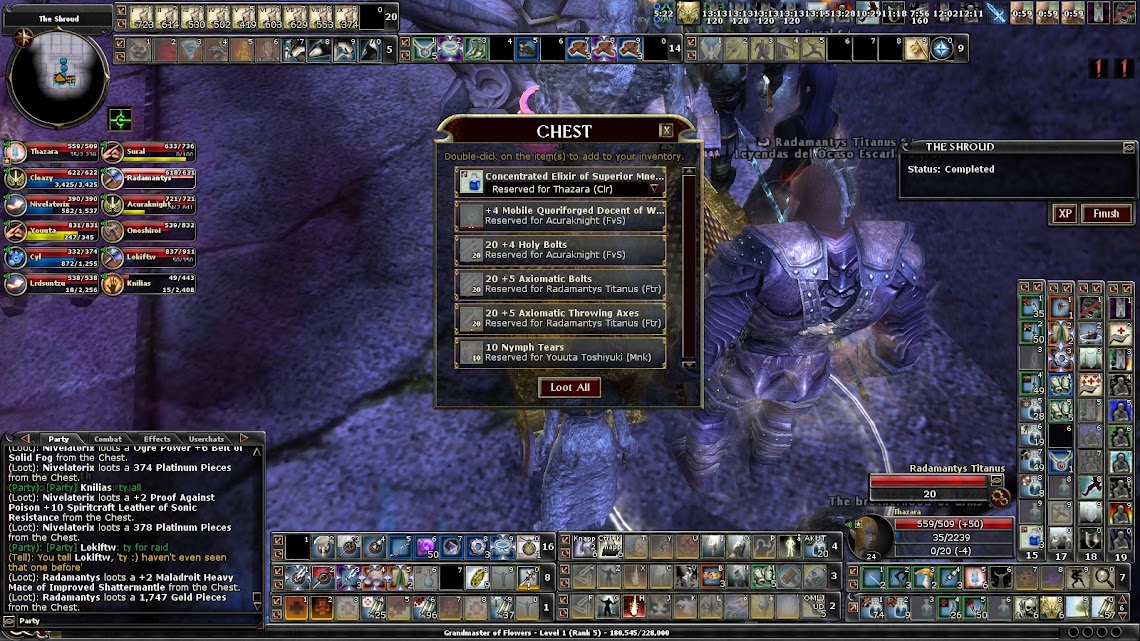 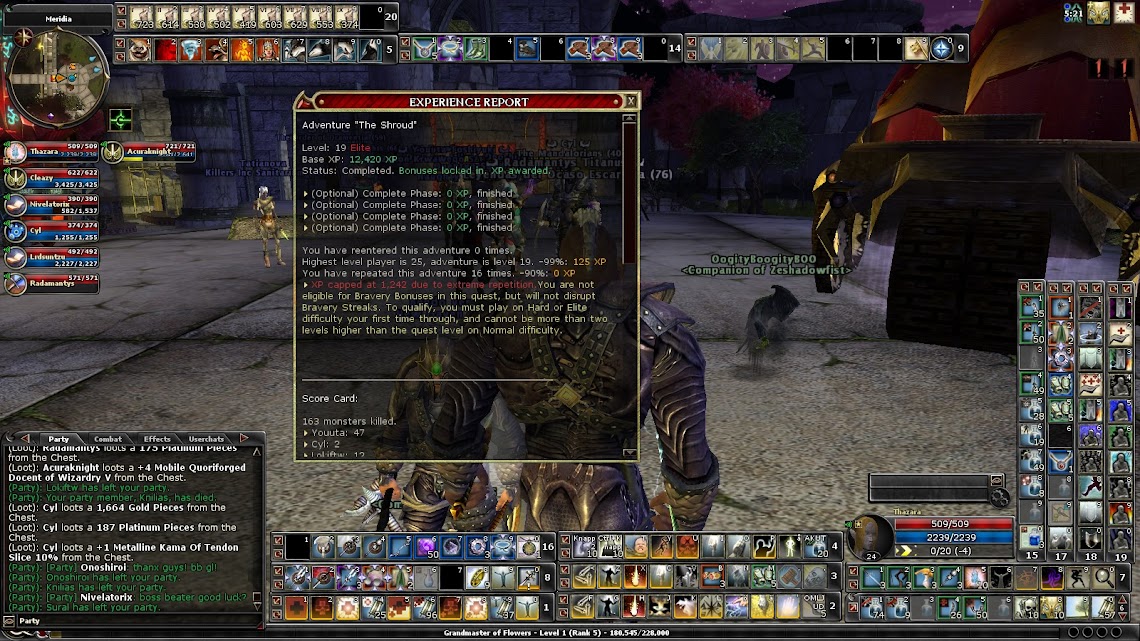 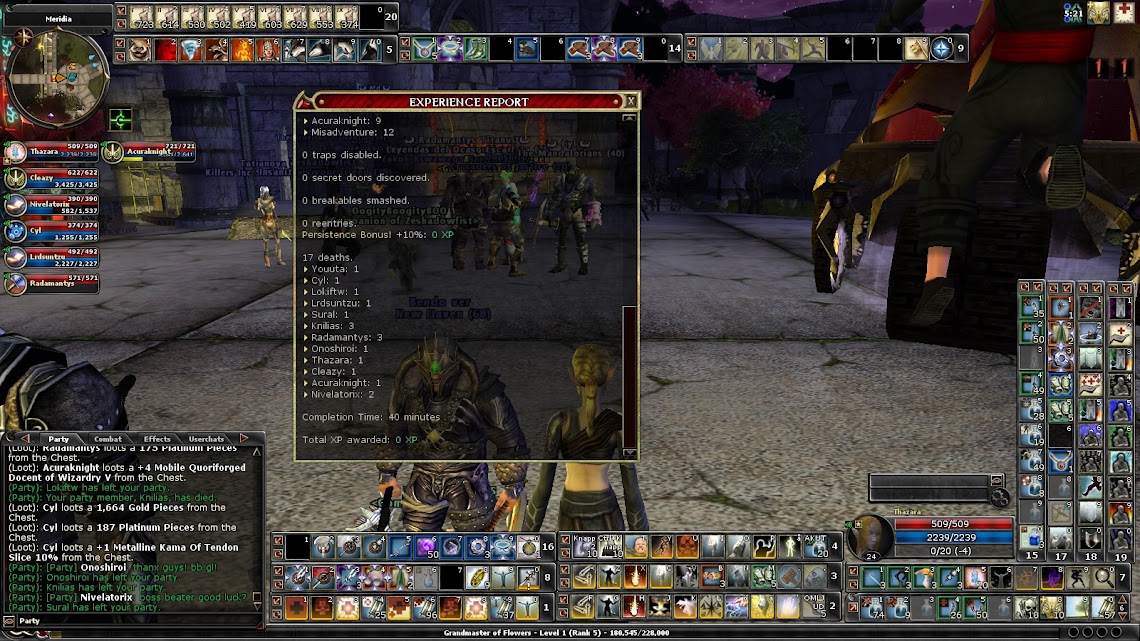 I lfm’d for ToD and got some ppl. Last 2 spots were filled by 2 guys who I know claim to be totally uber, so I figured, what the heck, let’s try elite. Everything was well until we got to phase 2. Apparently it wasn’t quite clear who was doing shadow tank, since the casters changed their minds just before we started. Then shadows got up top, and apparently someone up top aggro’d/ intimidated one of the shadows. We wiped soon after.

I told the party “I’m rerunning on hard, stay if u like”. Put up the lfm again and took a while to fill party, but this time we went in on hard. Phase 1 was fine, phase 2 had a bit of problems, but nothing major, and phase 3 was fine. Loot wasn’t that good, but run was ok. 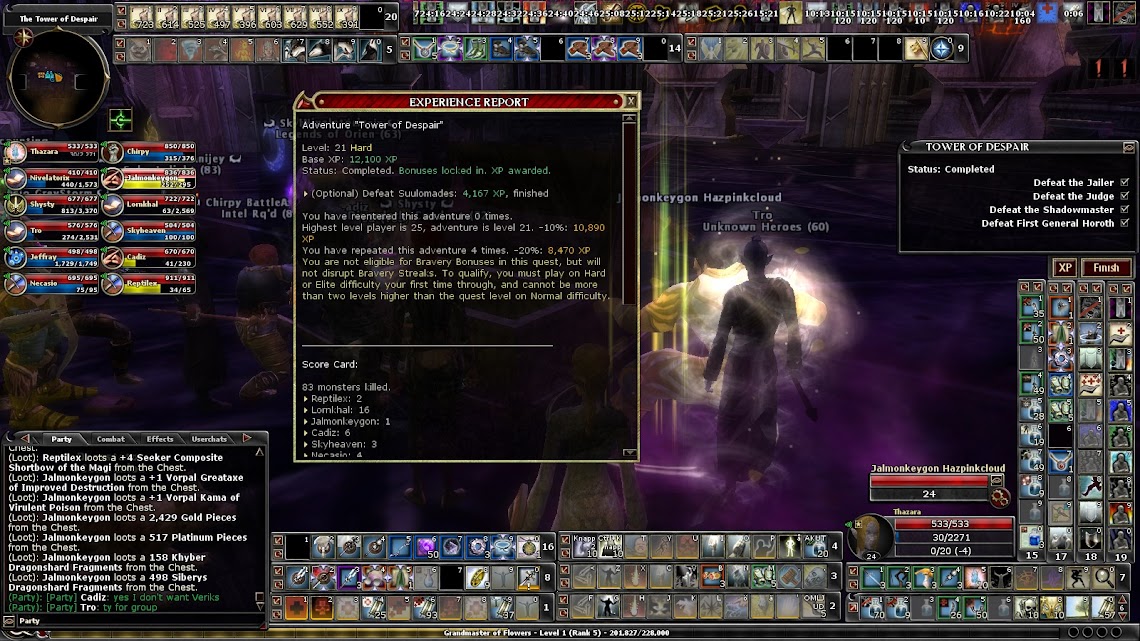 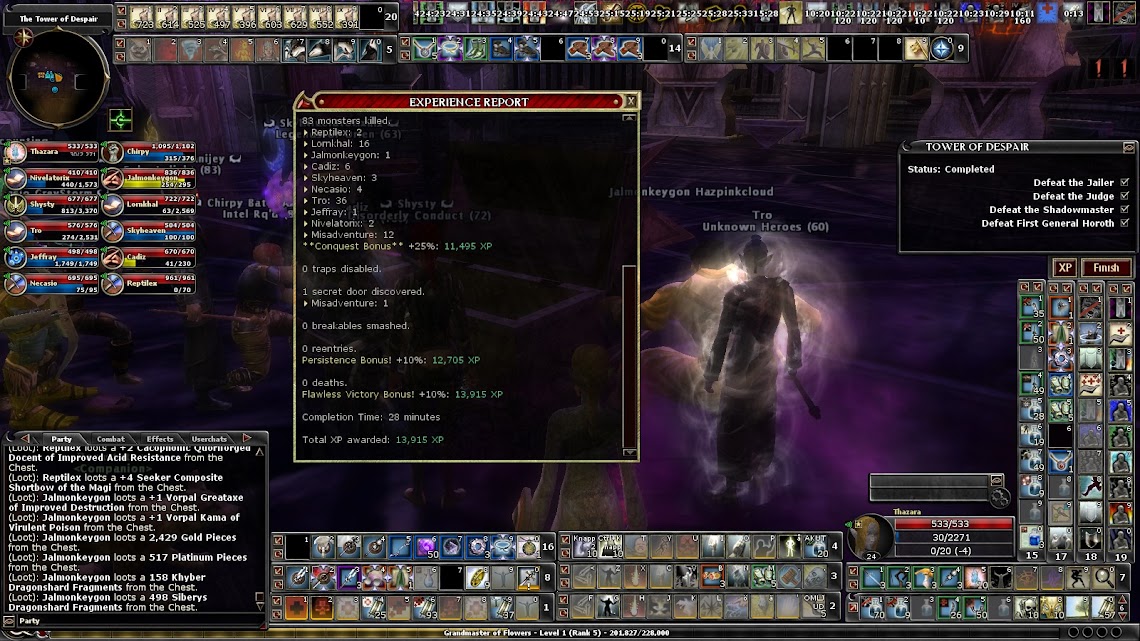 After ToD Cleazy put up a VON and I joined. 😀 Run was really dull. I was running after ppl, killing a little bit, not really doing anything. We get to boss, I throw some meta’d comet fall and it’s over. In VON6 I’m on ice as always, we lag a bit and the djinni goes down a bit too quickly, but all’s good. In the boss fight I hide from fire twice and one guy drops from not getting out of the way, but whole thing’s over in less than 30 min (VON5-6). I didn’t get a scale, but at least I got a raid token. 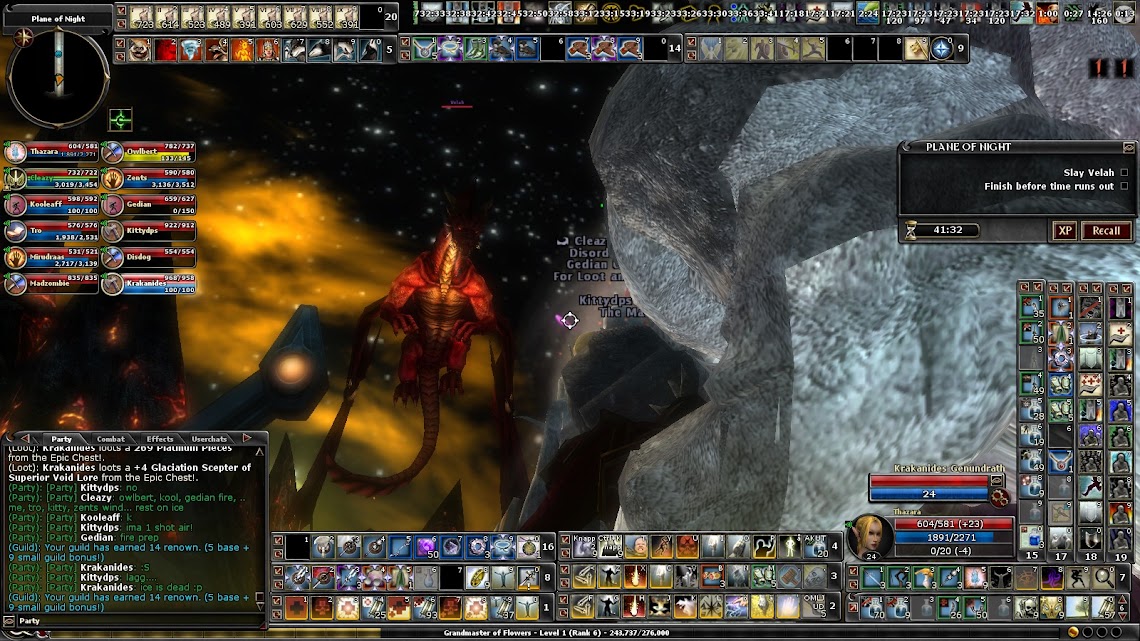 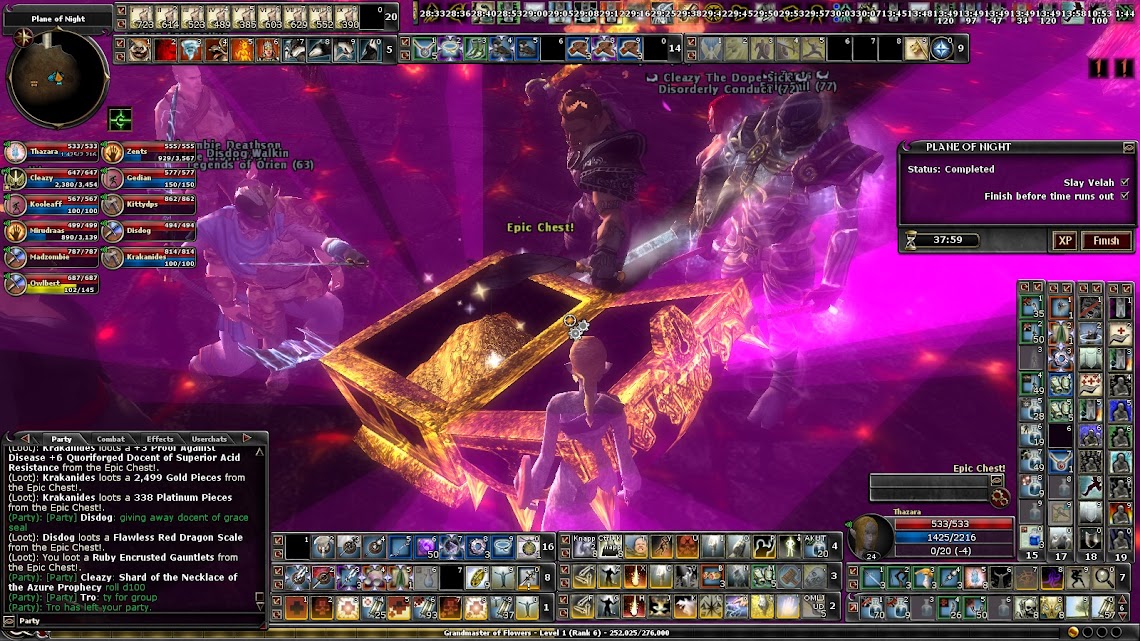 I had mentioned a bunch of raids to Cleazy that I wanted to do, so he put up an lfm for eChrono. I was piking a bit making some tea. lol! We filled quickly and I just entered and left Thaz at the entrance for a while. Run was smooth and we did all the optionals. I mostly piked when running around. One of the abishai got stuck in one of the bridges which was rather weird. Then he falls to the ground tries to get up, but gets ripped apart by the angry mob that is us. lol! I helped take out bosses with dp and bb and was spamming bursts. But since we were 4 healers + a bard, I didn’t really need to do anything. 🙂 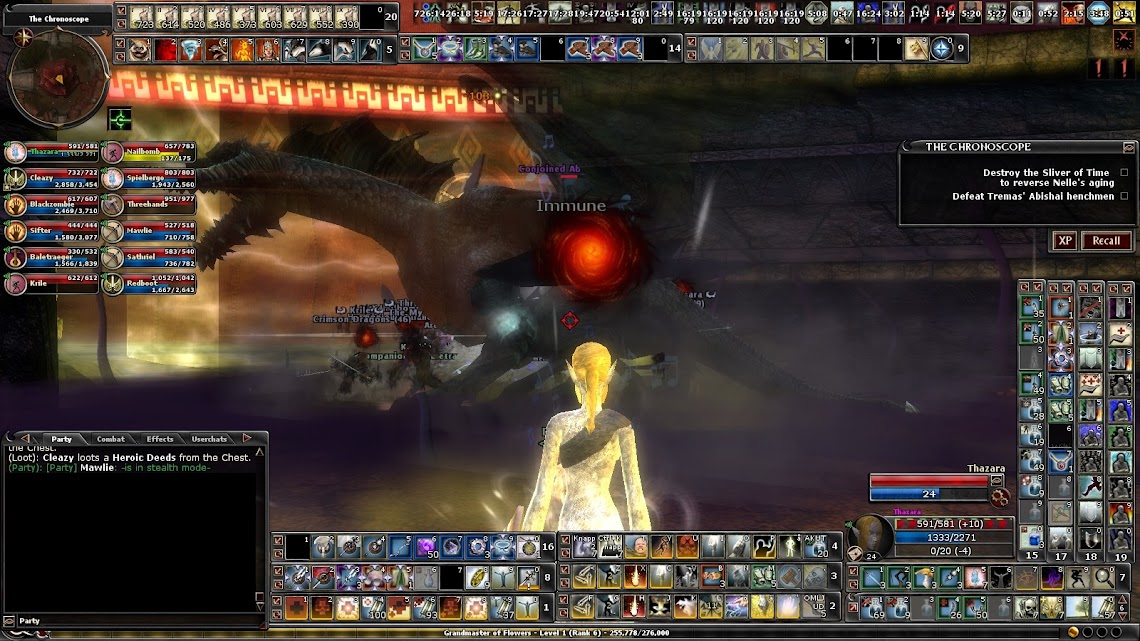 Two more raids I wanted to do, VoD and HoX. Cleazy put up an lfm for hard and we got some ppl who knows it well. We lose one guy on the way to the quest and we decide to go in one man short. With 2 fvs at 3000+ sp, I didn’t need to heal at all, and was just dp’ing the boss. 🙂 Funny bit was that my dp at least twice stole aggro from the tank. I had Sulo run up to me and start hitting me. I just stayed put at stopped dp’ing for a while, but at it is a dot spell, I still keep hitting him for a while after I stop casting it. I ran out of mana long before the other healers, I was feeling a bit bored so I just switch weapon and jumped in with the melees and let Sereinah worry about heals (she was healbotting anyway). 🙂 I have no idea if I was doing any damage, but I wasn’t taking too much anyway, so it was cool. Sulo goes down and group got a few named items, nothing I wanted though. 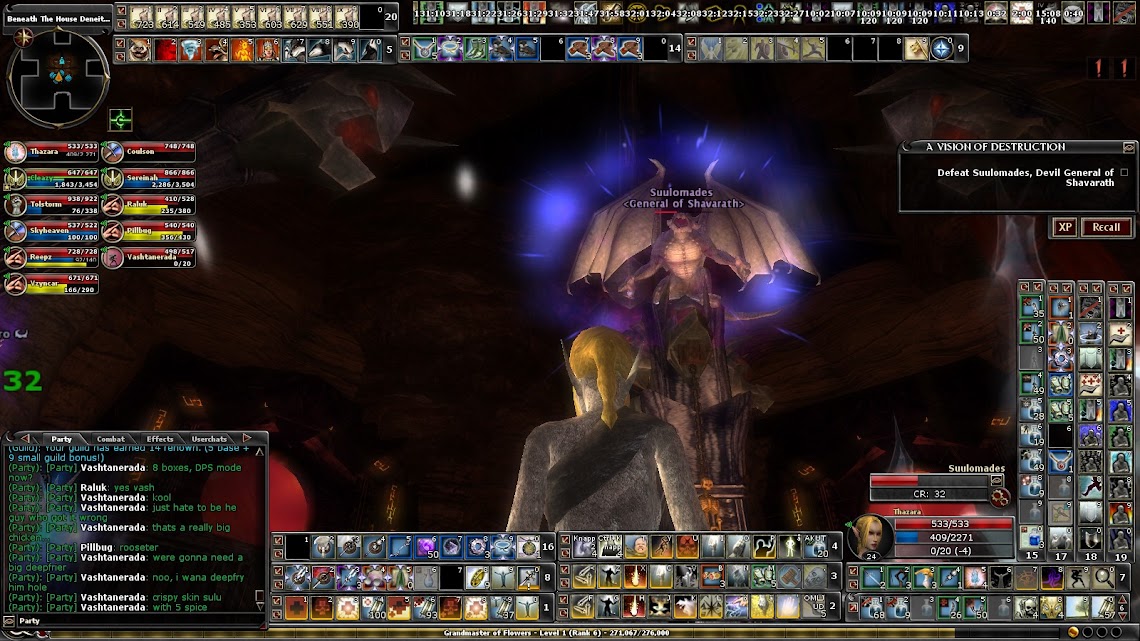 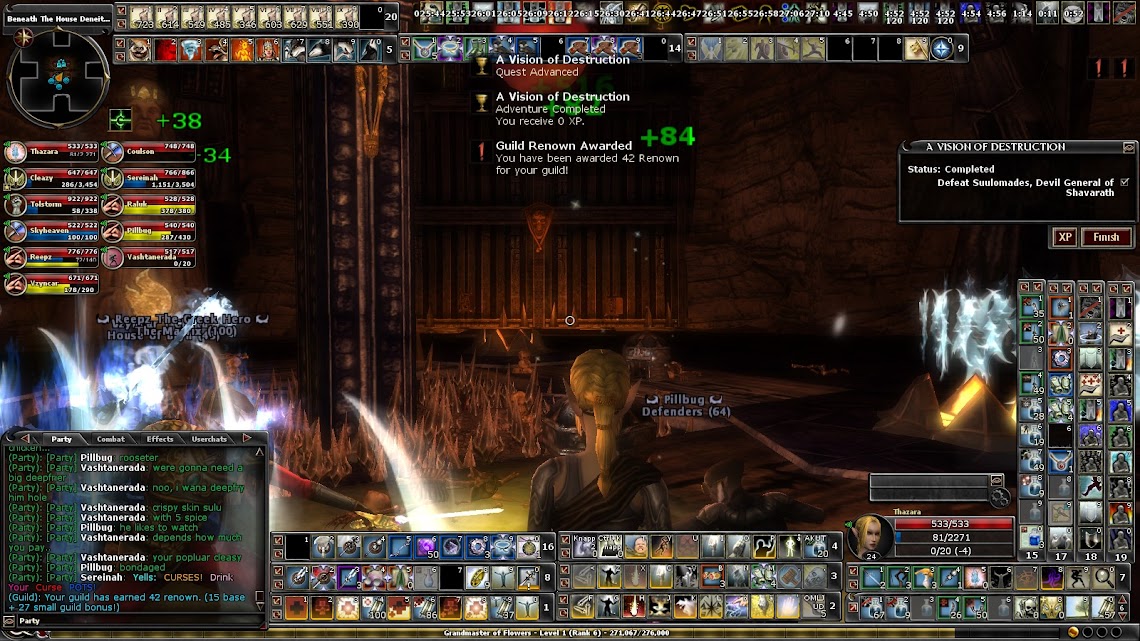 Cleazy asked if group wanted to stay on for HoX and most did. Serinah switched toon and she took control of the raid. Told ppl what needs to be done, and then was doing charmer and healer. I stayed in center as back up healer, and told Cleazy to stay with trash group (trash group is annoying to heal, and my melee isn’t good for doing enough damage anyway). I had switched to US ED before this and I wasn’t worried at all about mobs hurting me. Once puppies got uncharmed by one of the mini beholders, and a few times they ran off, and things got a bit confusing, but all in all it was a good run. No good loot for me, though. 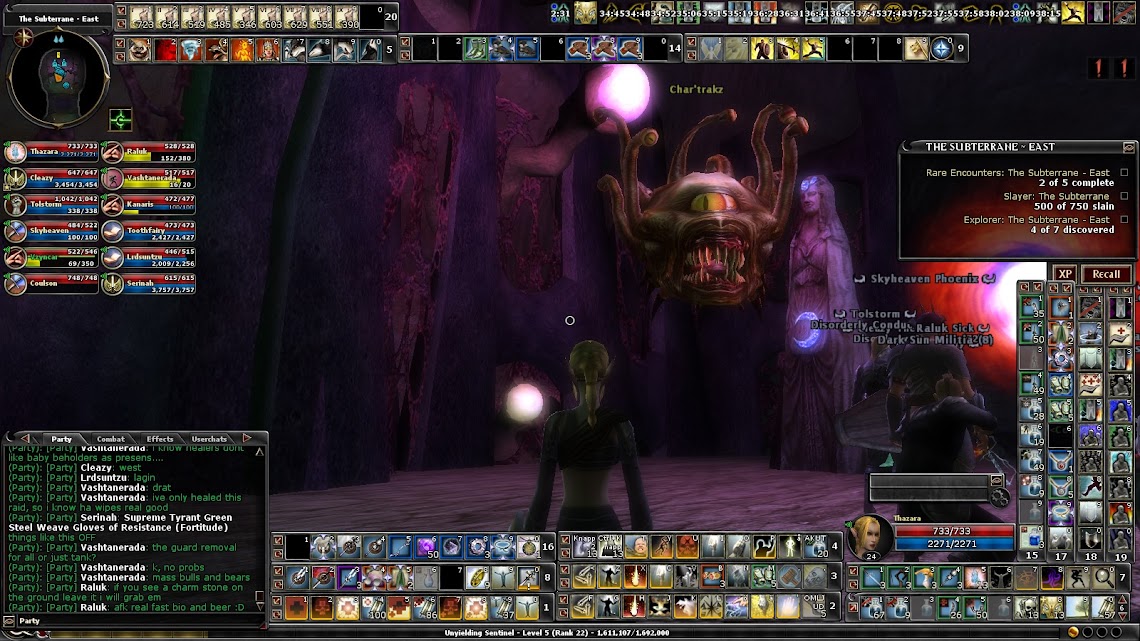 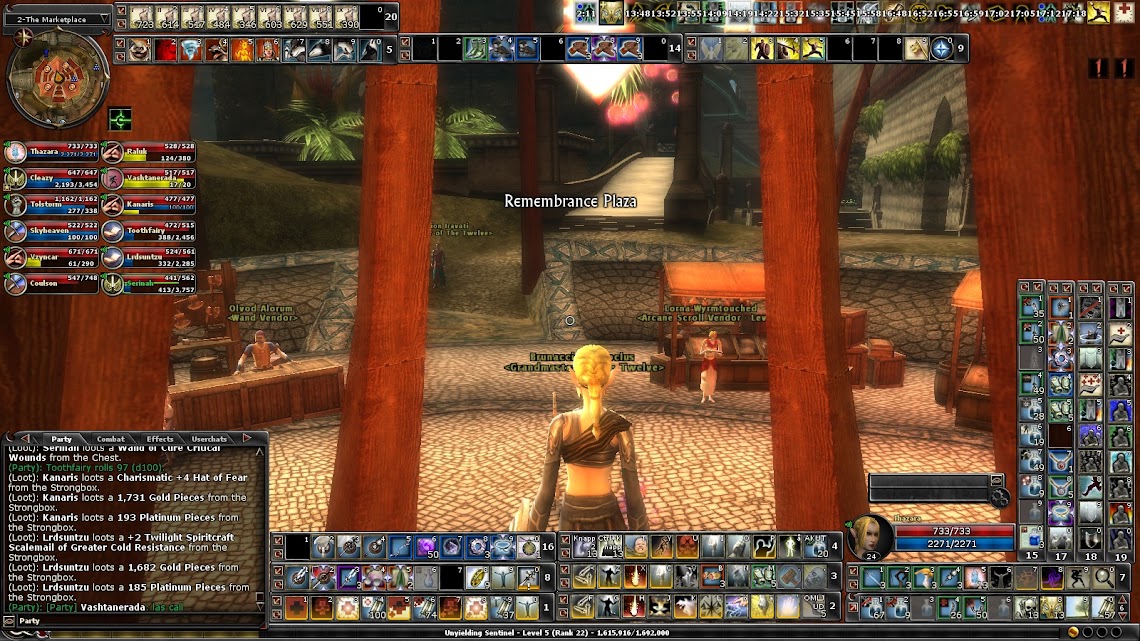 So far Thaz has all the gear I want for her, but the head spot got available after she got the Spidersilk robes (I need to repair these and bind them to her so they won’t take perm damage). The only head gear I know of that boosts clearic’s spells is the Alchemist’s Crown, from a rare in the Cannith Manufactory. Cleazy helped me farm for it. We did about 6 runs of this one room before we even saw Tegan, while Wrack kept showing up all the time. First time, no crown. So Cleazy lfm’d for chest openerers and we go 5 more ppl for the next time to come open the chest. And yay! the crown dropped for one of them, and I got my crown. But, seems like it doesn’t stack with the ED’s? At least I didn’t see an increase in spell power after putting it on, and Thaz isn’t using any devotion item.

Here’s Thazara’s current items, if u see anything that already offers the same boost as the crown, let me know?

Thank you for reading and have a wonderful day!

P.P.S I named my spotted wolf pup “Devastator” after the Chrono boss. 🙂