To start off I want to say that Thazara has now run every quest in the game, except The Lord of Blades and The Web of Chaos, and she is now flagged for all the raids. She has run all quests elite lvl 1-21, except the following: Ascension Chamber (normal), Hound of Xoriat (hard), A Vision of Destruction (hard), The Master Artificer (normal), The Dreaming Dark (normal), and quests lvl 22-23 on hard. I am going to do favor clean up and run all of these quests on elite, still.

Here’s the run down of Thazara’s Saturday.

Tower of Despair
I logged on with Thaz and wanted to do a ToD as the first thing. No ToD on the lfm. I sent a friend a tell “Wanna lead a ToD?”. He replied “Emm. No”. And then started telling me about how easy it is and what I need. Hmm. I was watching the lfm indecisively, then someone posted a ToD. I hit it right away and spent some time talking to the person posting. 🙂 He was telling me about how it’s easy to lead and how he’s done shadow tank role some time etc. (he was a monk/pally). Well, I’m sure he knew his stuff, but he failed to make sure the party knew it’s stuff. We entered without an experienced shadow tank.

Phase 1 is fine, we start phase 2 and the newbie shadow tank who didn’t have a cold absorption item put up fire walls, and Nythirios runs off. Someone gets him to come back and leader tells us to let the tank build up aggro. Then the shadow tank dies and firewalls go out, and we’re in a lot of trouble. Jedli dies, I die, I get a raise, raise Jedli and the casters, we’re back up strong from a close wipe, then shadow tank is down again, and I manage to raise one of the monks before I drop again… and we wipe.

I ask for a repost, but the leader drops and I get the star. Omg, I want to run it, don’t want to lead it, but I post for a shadow tank and dps. Someone sends me a tell that he can do it, but asks “2 wizards and you still need a shadow tank?”. I reply “1 is multiclassed, the other is new. We just wiped”. Actually, checking later, both were multiclassed, Niv’s 16 wiz/ 2 rogue/ 2 arti, Wyrde’s 18 wiz/ 2 rogue (+ epic levels). My lfm I get a good shadow tank and then get a fighter, 2 pallys and a monk. Retry we do pretty well, even though I didn’t do a very good job at leading. I prefer it when the leader gives out orders and tells people what to do, but I didn’t know my group, I didn’t know what people needed to do, so phase 1 and 3 was a bit confusing, but we got it done without any deaths. Yay! My first time leading ToD and we survived. 🙂 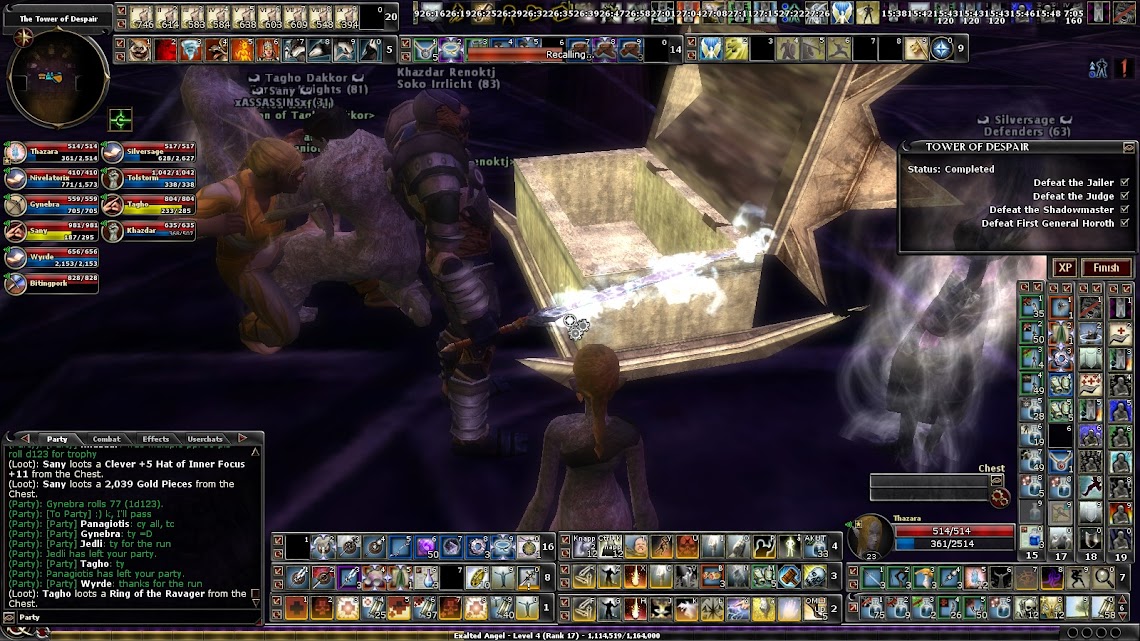 Demonweb flagging
After ToD I had some time before my weekly elite shroud, so figured I could finish flagging for Demonweb. I was missing The House of Death Undone and The Portal Opens. I got some cool people to help me out and we ran these 2 on epic hard, then headed to the Demonweb and ran the apparently most difficult one first: Reclaiming the Rift. I died on the way to the quest, other than that it was a smooth run. 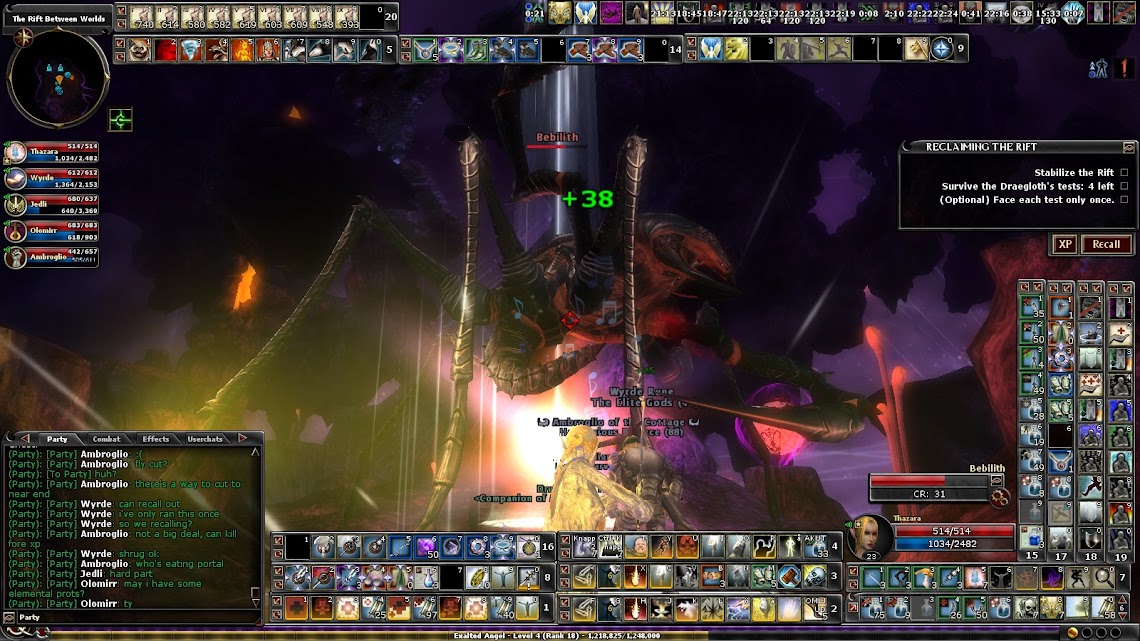 Weekly elite shroud
This week someone decided to start an eADQ just before my elite shroud, so a lot of people I know were there instead of in my shroud. 😦 Had to wait a while to fill, but in the end I got a pretty good group. Nivelatorix and Wyrde joined me, and Harrowing (sorc) who’s run with me before. I also got a healer who’s run with me before and he brought a guildie as third healer. I got kick-ass monks and even an arti, which has been rare in my elites. During portals I at first felt dps was a bit low, but soon realised it was actually pretty good.

The problem with good dps is usually that people get over excited in phase 2. 🙂 For the first time in a long while we were having problems there, people killed the reds too fast 2-3 times, before we got them all prepped to kill at the same time. Phase 3 was good, only 2 people had problems with their puzzles, and someone solved them pretty quickly (not my fastest phase 3, but not slowest either). Phase 4 was a 2 rounder, which is good, not excellent, but still good. One death – the one healer who had just over 400 hp. Phase 5 was also really smooth, and I didn’t even run out of mana, even though I was healing and DoT’ing. First elite shroud ever where I didn’t pot and didn’t even run out of mana. I was over healing for a little while, so I stopped and just waited for dp’s cooldown to end, so I could DoT again. 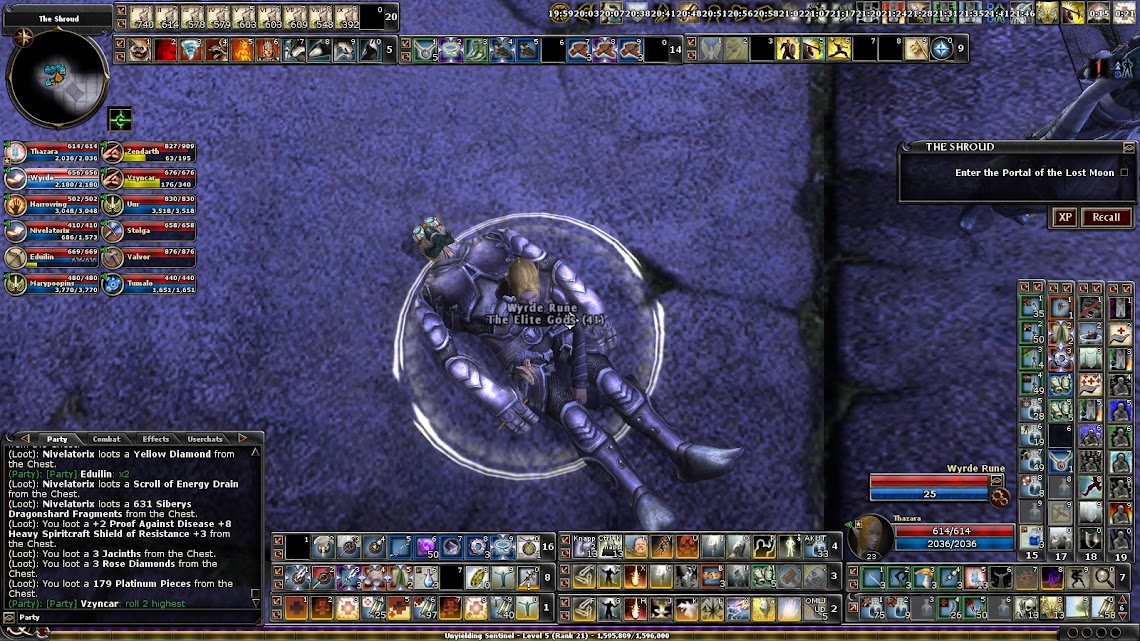 Thaz was pretty rude, Wyrde was resting while waiting for phase 5 to start, and Thaz decided to sit down on top of him

The Demoweb
I wanted to do ADQ, but I also wanted to finish flagging for the MOtU raid, so I asked Wyrde what he thought. He told me he’s on timer for ADQ, so I lfm’d for Trial by Fire hard instead. Wyrde was running a quest, so I lfm’d for a guide and Klinky (barb) joined me, and suggested we duo. While IP I was joined by a sorc and then Wyrde and Jedli joined. Klinky had some nice dps, so I only cast some spells and kept him healed, and we finished pretty quickly. After Klinky and the sorc left and me, Wyrde and Jedli trio’d The Deal and the Demon and got Thaz raid flagged. After this we also ran In the Belly of the Beast, which I have to say is the funniest quest I’ve run so far. 🙂 Getting swallowed my a giant worm. Lol! 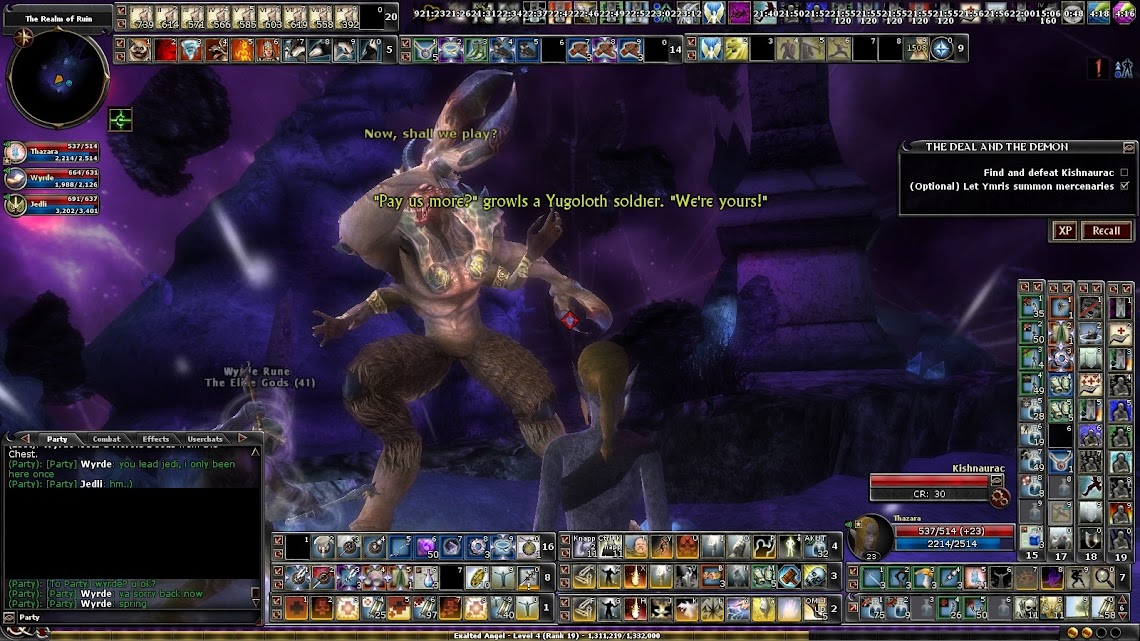 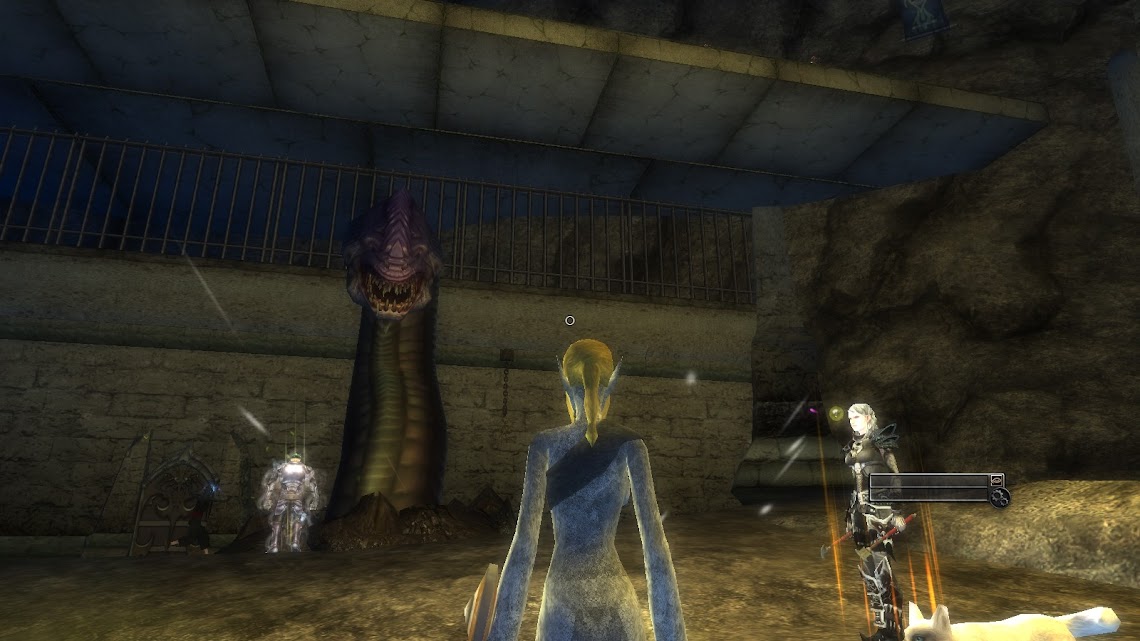 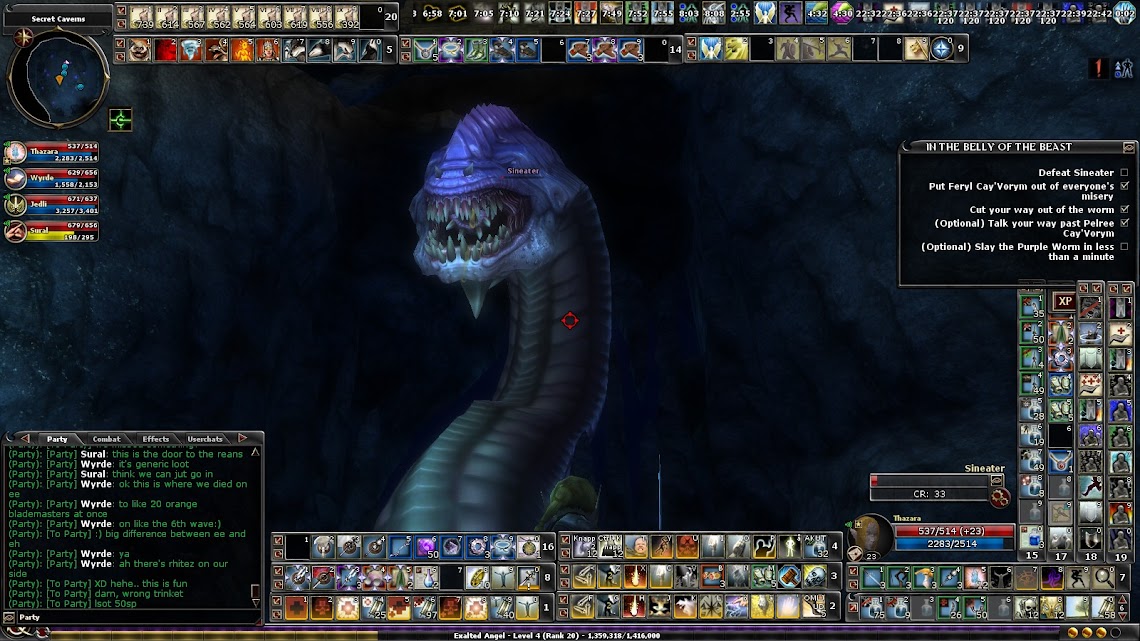 Cleazy was away and Definitely didn’t lfm for eVON so no eVON this time, and after the last quest I was feeling rather tired. Nothing on the lfm either that I wanted to run, so decided to call it an early night (quit at around 3 am compared to my normal 6).

That’s all for now. Tc and see you on Orien or Cannith.

P.S. I need to do a post about the Cannith group soon.