I basically only had raid plans for this Saturday, wanted to run ToD, Shroud, ADQ and VON. Thazara flagged for ToD a few weeks ago, and also got her boots, but I’ve been too intimidated to join random pugs. Wanted to run with a friend. Still, when I logged on I put up an lfm “1st tod, need someone to lead. got boots” (or something like that), then went into the battlefield to try and locate the ToD cave, which u have to do one time, to later be able to teleport there. Someone sent me a tell that he was on timer, but he could walk me through it. Well, ok, but I’m still not gonna lead a raid I don’t know. 🙂 Another person sent a tell saying “you don’t say on the lfm that it’s ur first tod!” 😀 Haha! I replied “I’m a cleric, I can”.

Found the cave with the help of some tells from a friend, and then my net died, so had to restart. I get back on, and put up the lfm again. Only a minute or so later I get a joiner who is willing to guide and lead. Yay! 🙂 She was really cool, walked me through all the phases, and led the raid. Was an easy “hard with optionals”, since she lfm’d for lvl 23-25, Thaz being the only lvl 22. Got a radiant ring (someone gave it to me), 3 named necklaces and some crafting mats. 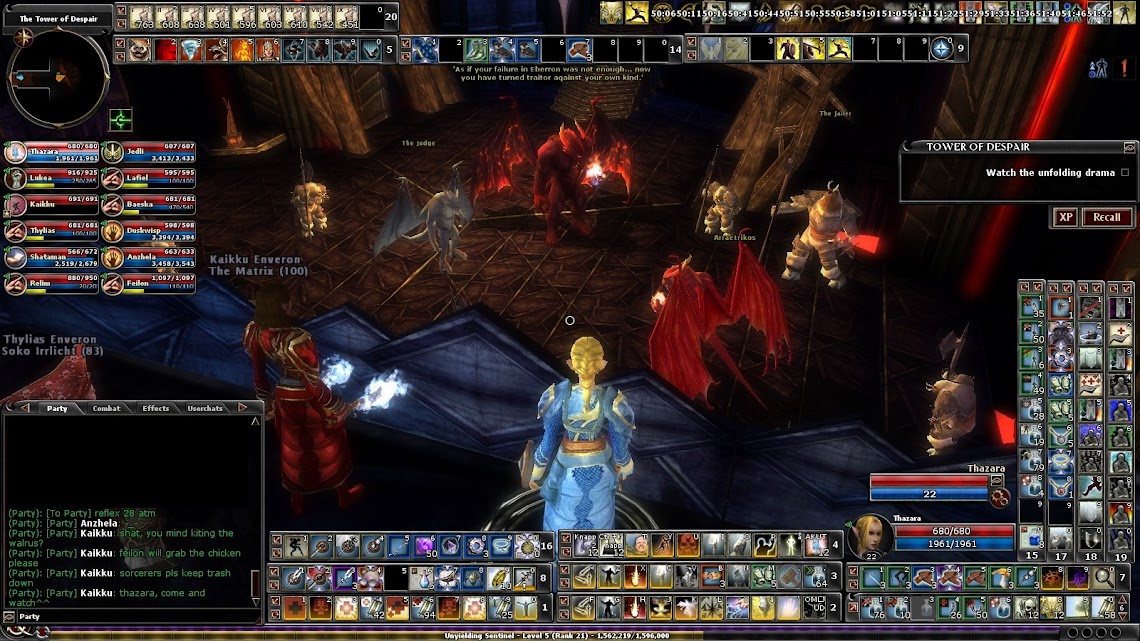 Then it was time for Thazara’s weekly elite shroud, and her 20th run. 🙂 Got a few friends/ acquaintances to join, still took us longer than a few weeks ago to fill. Just looking at the party member list, I figured we had a good group with enough hp and dps. But the thing with pugging shroud is, you never know what ur gonna get. We’re ok up to phase 4 (and yay! solved my 5×5 this run), in phase 4 we notice we’re low on dps. This run we’re 2 clerics and 2 fvs, I didn’t want 4 healers, but I figured the fvs could do dps too, so we should be ok. Well I’m DoT’ing away while healing and I quite soon have to start potting. Round 4’s over and we’ve lost about 5 ppl, and Harry’s not dead yet. But we take him out at the start of round 5.

I’m thinking, this is going to be hard. Phase 4’s like the test, it tells u how much dps u got, and if phase 5’s gonna be easy or hard. I expected a hard run. And yes, took party a long time to take out Harry, and I ended up drinking about 12 pots all in all, which is a lot, seeing as I’ve done elite shroud without potting before, the average being one pot. A few ppl kept dying as well, especially one of the fighters. He complained “4 healers…”, but I just replied, “hey, this is elite”. 🙂 Call me elitist, but when u keep getting 2 shot killed, it isn’t the healers fault, but your own. Also, to not waste mana, I don’t raise ppl much either, especially if someone else might do it. 😀 It’s kinda funny, I used to feel a lot of stress about ppl dying, like I was a crappy healer, but now, if ppl die in my shroud runs, it’s because they didn’t have enough hp and dr. 🙂 I don’t healbot, I heal and DoT, and if ppl die from 1-2 hits, then they suck and not me. 😀

Alright, so we finished after a difficult run, and Thazara got her Essence of cleansing. 🙂 Cleansed her goggles and was finally able to swap to gs + eveningstar gear. Here’s Thazara’s current gear setup:

🙂 After this we 3 manned heroic ADQ, preraid casual, raid elite. I should have swapped to US ED before this, because in EA she’s kinda squishy. I also joined a group for a hard LoB, but I was ready to quit on the party around the time when I ran out of mana. LoB was at maybe 80% still when I had to start potting/ scroll healing, and ppl were running around silly. In the raids I run, I usually prefer to have the melees on the boss, surrounding him so he stays put. Here it was just crazy. I started off focusing on the dog kiter, which I was told to do, but then ppl started getting hit and dying, so I started throwing heals at different ppl and raising. I was ready to quit long before we wiped, but I kept at it. Used almost all my pots and resurrection scrolls.

🙂 You sorta know ur gonna fail when the healers have to start potting when the boss is at 80%. I actually said over voice “so, are you guys like supposed to kill him now?” Ppl were kiting the boss, kiting dogs and I was just trying to figure out who the hell to heal.

🙂 During the run I was getting tells from a friend, so after the wipe, I told him so and then joined him in eVON. It was a very smooth run, and Thaz got some xp for her ED. After he was asking if I don’t want to join his guild, we talked for a while and I sorta gave in in the end, offering to move Maidae and Cerge, but not Thaz. 🙂 I said I could move Thaz if I like the guild more than my current guild, Legends of Orien.

Ty for reading and see you on Orien or Cannith