This is the blog I was going to write on Saturday, but was unable to because of the broken blog.

Someone told me a while back that there’s in his opinion too much elitism on the higher levels. So I’m wondering, have I become one of them?

I leveled Thazara to 21 and did my first lfm for Shroud on Saturday. And hard. I wrote on the lfm “hard shroud, pref min 400 hp”. I was told by someone joining that I should have asked for DR breakers, and when the third ranger joined the same person told me “no more rangers”. Well I wasn’t too worried, since everyone joining did have min 400 hp, and I got a second healer (Hey, I’m a caster, what do I know about dr breakers?). Party was mostly melee, with only one caster, a sorcerer. Part 1 went fine, but in part two we had to do it 3 times because someone killed one of the reds too fast 2 times. And the same person sending me tells earlier was like “organize them” to me. Fine. So I started yelling out orders. 🙂 Do not kill, only prep, and pull all the reds here. Then when someone the third time killed one before the kill order, they were all more or less prepped anyway, so I just said “ok, kill” 🙂

Part 3 went really well, and in part 4, even though I said to not kill the last devil, someone still took him out (I sorta saw it happening, but wasn’t sure if it was the last one). But no big, Harry dropped in two rounds and only one death, the bard. I got to do the raise for the first time (I haven’t wanted to do it before). Part 5 taking out the reds and the rogue parking the ellie also went fine, but when Harry arrived the sorc and the bard both dropped in one hit. I was like “seriously?” over voice. Someone told me to not raise, but after a while I raised them anyway. The sorc moved next to me and was getting aura heals. One hit from Harry and they both drop again. At this point I considered it a waste of mana to raise them, so I just let them be dead until the fight was over. Was that elitist of me?

Well actually, in my opinion it was the most logical option. 🙂

After Shroud Thazara headed over to King’s Forest with her hireling Albus the fvs. And who doesn’t she meet but the green dragon Veraxiena 🙂 Thazara doesn’t have any of the skills intimidate, bluff or diplomacy, at least not at any level that counts. She tries to use diplomacy, but Vera get’s angry, and attacks who? Albus! Muahaha! Thazara is standing at a more or less safe distance, blocking and throwing divine punishment with metas at Vera.

Check out the pics here:

Vera’s throwing poison at Thaz, but she just shakes it off. Albus on the other hand is constantly knocked on his behind 🙂 And when Vera tries to attack, for some reason she get’s her head stuck in the dirt, lol. But when she’s down to maybe 1/5, she suddenly disappears, and I realize that she’s up in the air. Still within casting range, though. So a short while later we’ve beaten her. Too bad she didn’t drop down afterwards.

Thazara is about to continue through the forest, when she sees something. Vera’s treasure! Two treasure chests and loads of gold. She does a victory dance.

🙂 Here are Thazara’s current stats with Legends of Oriens ship buffs, own mass buffs (I buffed the hire as well) and barkskin. But no heroism or rage, and no minos: 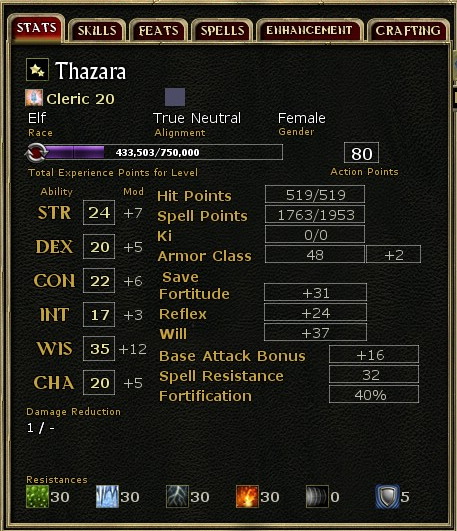 That’s all from Thazara for tonight.
Take care and see you in game.

P.S. Thazara stumbled into Underdark as well, and met earth and air elementals, but also driders and ooh, salamanders! 🙂 I’m too tired to post any more pictures at the moment, though. Next time.

16 comments on “Have I become elitist?”